The match-three puzzle genre has been evolving in recent years, and one of the best products is the new puzzle RPG genre. IGG’s new mobile game Raids & Puzzles lets you enjoy all your favorite MMORPG elements while adding match-three mechanics. Instead of the boring turn-based or auto-battles that most mobile RPGs now feature, you get to solve puzzles in order to attack enemies.

Released on iOS and Android platforms, the game puts you in the shoes of an adventurer who must save the kingdom from evil. To do so, you need to assemble a team of heroes who will travel across the land and battle hordes of monsters. You will need to find the right combination of heroes that will help you conquer your enemies. Don’t forget to power them up in order to progress further in the game. If you find yourself struggling to defeat your enemies, then make sure you check out our Raids & Puzzles beginner’s guide for some useful tips, cheats and strategies below! 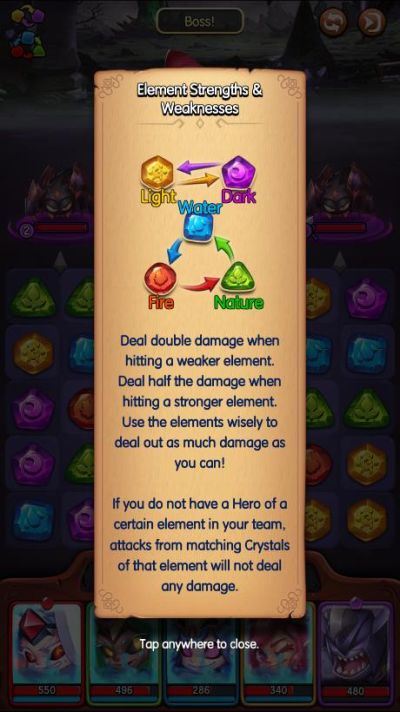 Your team is composed of five members. It is important that you include all 5 elements in your lineup, even if you know all the opponents will have the same element. This game’s battle system works like a match-three puzzle. You won’t know which elements will appear on the board, and they are always random. If you leave out an element, you will not deal any damage when matching tiles of that color. For example, if there is no Light hero in your team, you will just get a message that says, “Hero Missing” when you match Light tiles.

When you combine four or more tiles of the same color, you will create special tiles. Combining four tiles will create a Bomb. You can detonate it to destroy the four tiles around it regardless of their color. Combining five tiles in a row, a T shape, or an L shape will create a lightning tile. Detonating it will destroy all same-colored tiles on the board. 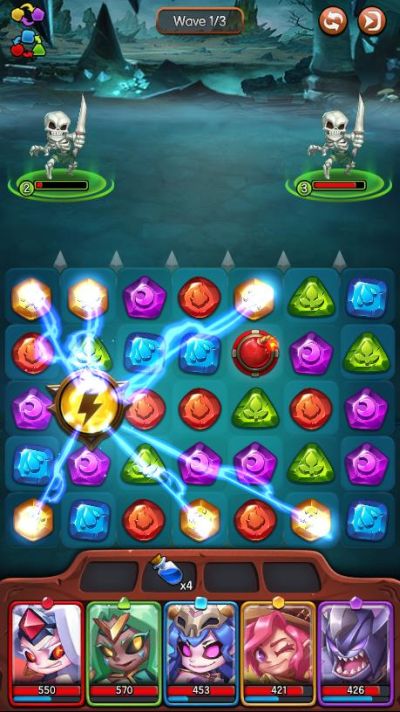 Make sure you use these special tiles strategically. For example, just because you have a lightning tile does not mean you should use it right away. If there aren’t a lot of tiles that have the same color, you could end up wasting its damage potential. Wait until you have a good number of same-colored tiles to ensure you maximize the use of your special tiles.

3. Look Before You Match

If you have played other puzzle RPGs, you probably think you just need to tap on an enemy to make the damage go to him. Or you might have even played a game where damage automatically goes to a random enemy. Unfortunately, this game is a bit stricter. You only deal damage to enemies that are in the same column as the tiles that you matched. Even if you match five tiles in a row, if only one of those tiles is in the same column as your target, the enemy will only receive one tile worth of damage.

4. Use Your Skills Wisely

While we are on the topic of using skills, make sure you carefully weigh the pros and cons of using hero skills. Hero skills are great for killing off enemies quickly, hence reducing the risk of taking damage. The problem is, skills are not always available. You have to fill up the Mana bar first by matching tiles that have the same element as your hero. Once the Mana bar is full, your hero’s portrait will light up and you can tap on him to use the skill. 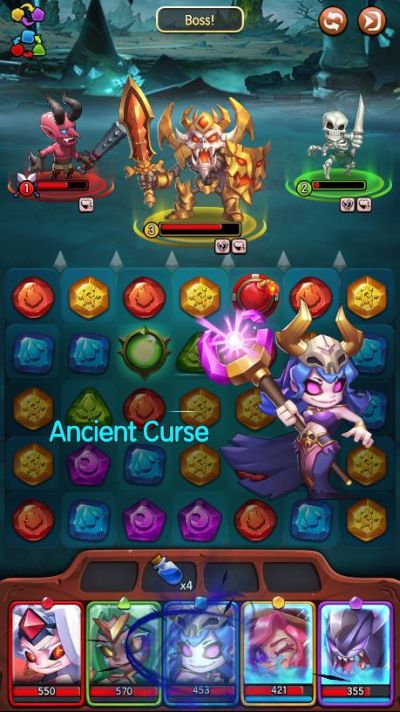 Since battles come in multiple waves, you wouldn’t want to use up all your skills and not have any left for the Boss wave. On the other hand, not using skills will mean you take more damage while you chip away at the regular waves. The best thing to do is to quickly gauge whether or not you will still be able to refill the mana bar by the time you reach the Boss wave. Use skills right away in the first round, then spend the second round refilling the Mana bar. If you see that your board has a lot of potential matches for a certain element, feel free to use the hero skill for that element.

You generally want to use multi-target skills first, while there are still multiple targets. Using a multi-target skill when there is only one target left does not increase its damage. Also, keep in mind that skills do not carry the elements of their heroes. That means you are free to use your Water hero’s skill on a Nature enemy without worrying about wasting the skill’s damage.

Most heroes you will recruit have offensive skills. However, there are a few healing skills in the game. While we usually believe the best defense is a good offense, it doesn’t hurt to have someone that can help your team survive longer. You won’t always get good matches for attacking, which means battles can last longer than you would like. When that happens, you need a hero that can heal your team while you’re waiting for better matches to come along.

As you have probably noticed by now, your heroes come in different rarities: N, R, SR, and SSR. Naturally, SSR heroes are stronger than N heroes. Your heroes also have star ratings which determine their maximum level. When your hero reaches his current maximum level, you can use the Enhance function to increase his star rating. His level will be reset but you will be able to level him up further than before. 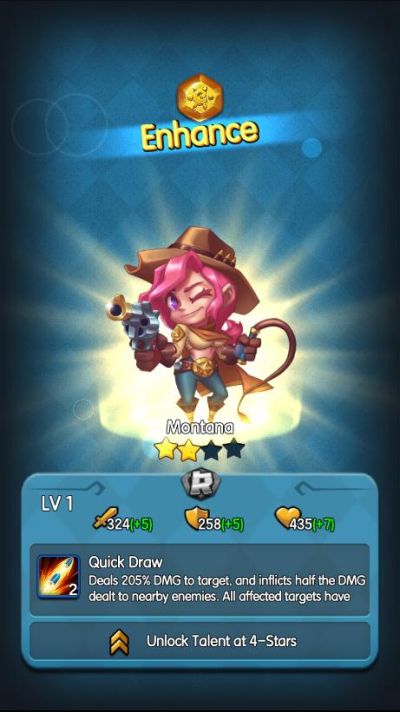 Now, if you have invested in your low-rarity heroes, you might feel hesitant to use a new one with higher rarity. That would be a mistake. Even at three stars, an N hero will be weaker than a one-star SSR hero. Always choose the hero with a higher rarity because they will have the best stats overall. 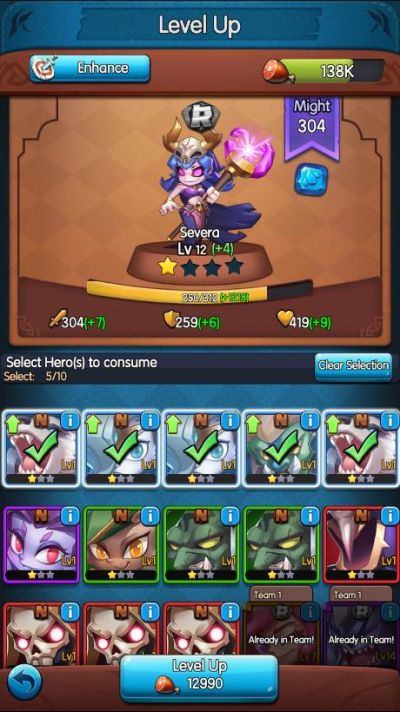 The game allows you to level up a hero by sacrificing any extra heroes that you have. Since you won’t have a lot of extra heroes until later in the game, it is best if you maximize the use of each hero. Heroes get bonus experience if you sacrifice someone that has the same element. You will see a green arrow pointing upwards on each hero that gives bonus experience. Unless your hero for a certain element is maxed out, make sure you always use the same element as sacrifice.

Upgrading your Castle will unlock new features as well as give you space for building more structures. Since you only have one builder, and it will cost you real money to get another one, make sure you always have construction queued up. Construction takes time, and you will be missing out on progress if your builder sits idle.

The game comes with a guild system for players to gather and grow together. The problem is, you only get benefits if your guildmates are active. Guild Bosses give out great rewards, but only if they are defeated. Guild Bosses will disappear if they are not defeated within the time limit. Since each member only gets a limited number of attempts, there is a high chance that your guild will not be able to defeat the boss in time if only a few members are active. 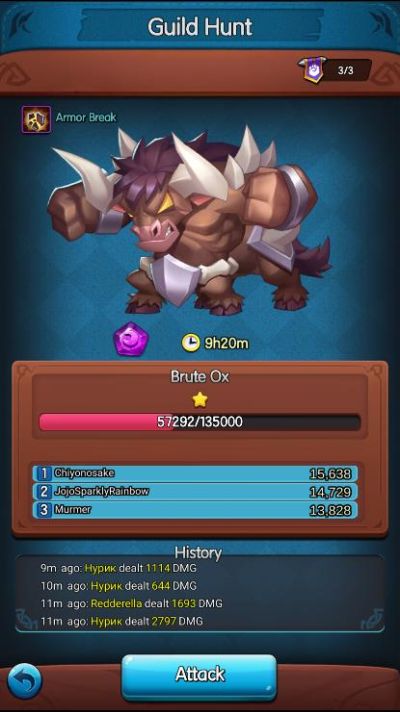 Another benefit of being part of a guild is the Guild War. Unfortunately, your guild must have a combined total of at least 4000 Trophies. If the members of your guild are not actively raiding other players for Trophies, your guild won’t even be able to register for the Guild War. Don’t be afraid to leave an inactive guild. You may even need to hop between guilds a few times. Keep looking until you find one that match your needs.

We already mentioned earlier that you shouldn’t be leaving your builder idle. Aside from construction, you also have your crafting and training queues. The Alchemy Lab allows you to craft different items that you can use in battle. The Camp allows you to train heroes by spending resources. It is great for collecting heroes that you can sacrifice for leveling up. 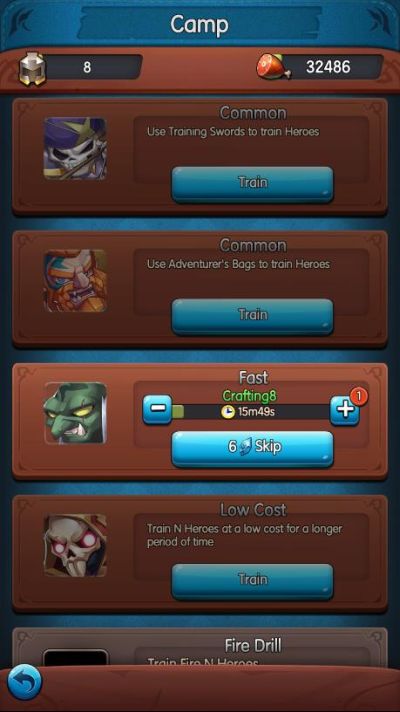 Gems are the premium currency of the game. Unlike most other gacha games where you can easily farm premium currency for free, gems are really hard to come by in this game. Quests and events only give out a handful of gems, and you will need hundreds to summon from the SR pool. Don’t be tempted to do single summons just because it’s taking too long to do a 10x summon. The game’s 10x summons guarantee better heroes, so it’s better if you wait than waste gems on mediocre singles. 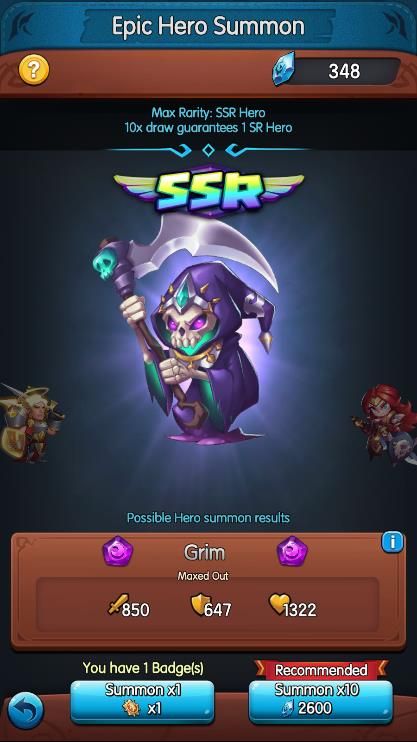 Don’t worry about your lineup. If you are diligent enough in playing every day, you will be able to gather enough summoning badges to get a few SR heroes. Those should be enough to carry you through the first few chapters of the game until you can gather enough gems for a 10x summon.

12. Fill Up The Reward Chests

Claiming a reward will make the chest go on a 12-hour cooldown. That means you can open up each chest up to two times per day. Make sure you work on filling them up as soon as possible because the 12-hour timer will not start until you have claimed a reward.

The main quests are designed to keep you on track in terms of progress. These tasks normally involve activities that you would normally do, so they don’t take much. In fact, if you end up completing the task even before you see the quest, you still get credit for it.

For example, if the quest says you need to defeat chapter 8, you won’t have to replay the chapter if you have already defeated it. The quest will automatically be completed. You can see your current quest at the bottom of the Castle screen. The main quests give out gems and summon badges, so they are crucial to your overall progress.

Even though the game isn’t too generous when it comes to premium currency, that doesn’t mean they don’t know how to treat their loyal players well. There are several freebies available in the game if you know where to look. Right off the bat, you have daily log in rewards that give you various prizes, including rare heroes that can be added to your team. 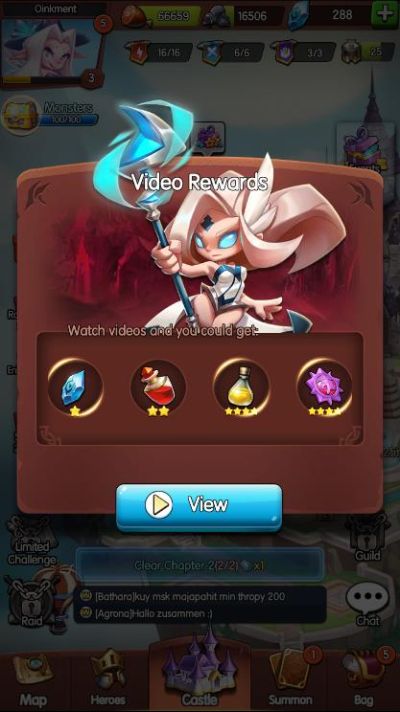 You also receive Achievement rewards for reaching certain milestones in the game. You will see a number on your player portrait on the top left corner of the screen if an Achievement reward is waiting for you. You can also tap on your portrait and scroll down to see the different Achievements. This will help you keep track of those you are close to accomplishing. Make sure you claim them as soon as they become available.

Finally, when you look above the castle, you will see an airship with a play button on it. Tap on it and you will bring up an ad offer. Accept the offer and you will receive various rewards, including a handful of gems, after sitting through a short video advertisement.

It takes a lot of work to build an unbeatable team in Raids & Puzzles. Make sure you remember our tips, cheats and strategies above if you want to succeed! In case you have come across additional tips or tricks, feel free to let us know in the comments below! 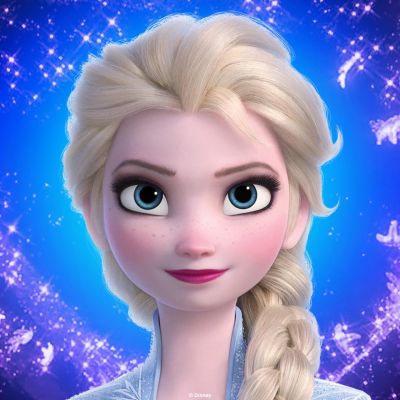 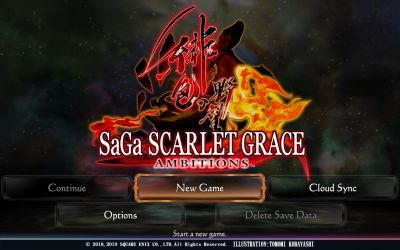 I’d love to see a hero roster showing the skills of each hero once maxed out. Can help players choose which hero’s may be worth levelling first. Like hero grading.

Where is the hero spire located and how can I access it so I can convert heroes for hero souls? Thank you