We’ve covered a couple MDickie games in the past – School Days and Hard Time – but Popscene (iOS / Android) is a definite departure from those two, as well as the developer’s wrestling-based titles Wrestling Revolution and Booking Revolution. There’s no fighting or violence here, as this game is a music industry simulator where you, as an unknown musician, work your way up to the top, recruiting bandmates, signing contracts, playing gigs or concerts, and hoping that your next hit is bigger than the last. And you may again be amused at how the game parodies popular musicians from all genres and generations – you’ve even got MDickie mainstays like the military guys and wrestler parodies making music like you are!

As the old AC/DC song goes, it’s a long way to the top if you want to rock ‘n’ roll. But our exclusive Popscene cheats, tips and strategy guide can help you get there faster!

1. Know Your Musician’s (And Others’) Skills 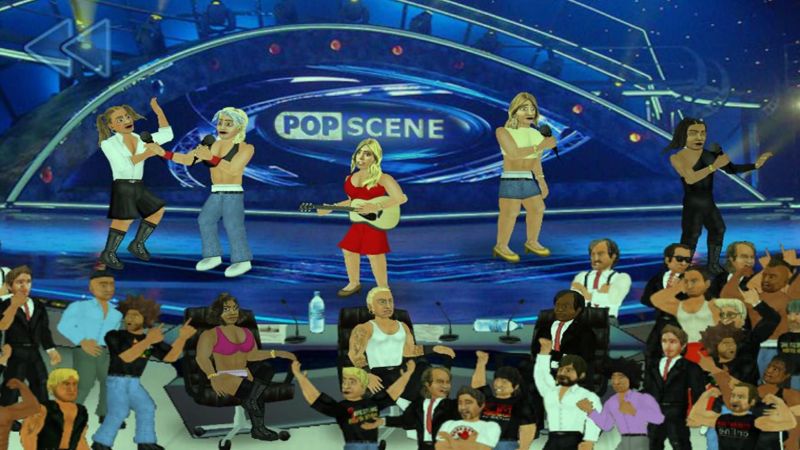 Before you go ahead and create a new character, it may be a good idea to recap the skills each musician, including yours, has.

For starters, you have 50 points to allocate towards four skills – Talent (your natural skills as a musician), Performance (your ability to get people interested in your music), Writing (your songwriting skills), and Production (your skills in producing songs). There are four other skills/attributes which you cannot edit, unless you have the paid version of the game. Attitude determines how likely an artist is to act like a pro, Happiness is how content they are with the state of their musical career, Popularity is how well-liked they are by music consumers, and Reputation is the clout they have in the industry.

2. Focus On Writing And Production

When creating your musician, it may seem like a good idea to make him or her as balanced as possible when you’re distributing the skill points. You’ll only end up with someone who’s mediocre across the board. Instead, you want someone who’s decent (though not yet good) in Writing and Production, as that’s going to give you a better chance of writing a song that hits the three- or four-star mark in stars (song quality) or hearts (audience impact). You’ll be asked right away to submit your first song, and you want something that will at least have a chance of getting an average reception. Talent and Performance skills will usually increase as you play more events. 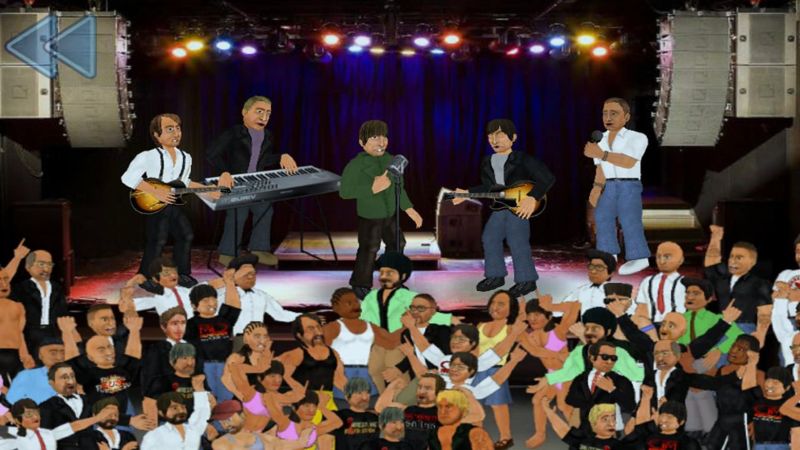 As you start the game, The Underground label head Mat Dickie (yes, Mr. MDickie himself) will advise you that you can’t do it by yourself. You only have 50 points to distribute across the board for your musician, and keeping the above tip in mind, it would be best if you recruit bandmates who make up for your lack of Talent and Performance skills. We suggest adding at least one musician who’s Talent and Performance stats are in the 65-75 point mark, so that way you can complement each other. Additionally, songwriting moves faster if you’ve got somebody to work with.

Regardless of whom you recruit to join your band, the main thing is to make sure the sum is greater than its parts. In other words, you want a band whose overall stats (on the top portion of your screen) are as balanced as possible.

4. Just Say Yes, When A Label Wants To Sign You

At some point in the game, the major labels will start seeing if they can sign your band. As your band’s stats improve, this would mean progressively larger advances and royalty percentages, so just go ahead and snap up those offers. Just be careful when jumping ship before your contract is up – we’ll deal in depth with court cases in a bit, but joining another label while on contract to your old one means your soon-to-be former label may eventually sue you. 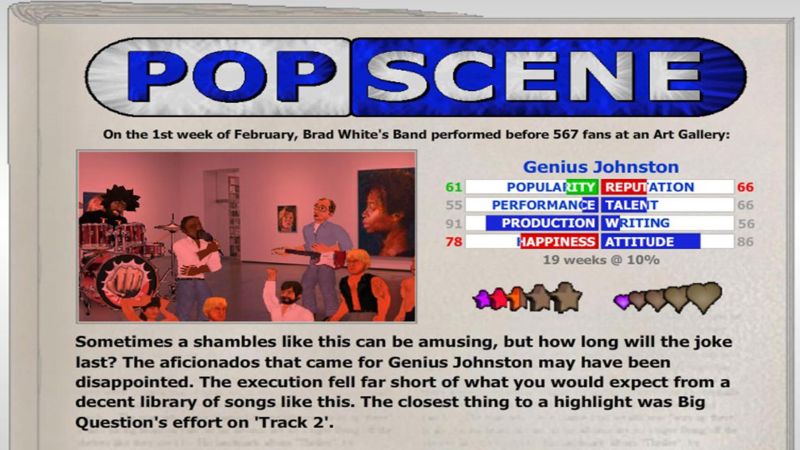 When we said “just say yes” earlier, we meant to say it may be too risky for you to haggle. Don’t bother checking Creative Control – if you do, you’ll need to seriously lower your advances and royalties in order to seal the deal with the record label. And you need that money in order to sign better musicians as you go along.

The beauty of Popscene is that you can select your favorite real-life songs on MP3 (via your device’s music apps) and make them your own “recordings.” So if the label head decides that you’re better off as a dance troupe even if you’ve only been “recording” punk rock with instruments, or if he/she gives you a band name that sounds like that belonging to a bad ‘80s hair metal band, just go with the flow. At the end of the day, the choice of songs is yours, so you do still have some sort of creative control.

6. Have A Revolving Door Cast Of Bandmates

It’s probably fitting that Popscene features a Billy Corgan parody in “Smiling Politely,” because you’ll actually be better off running your band just like the Smashing Pumpkins frontman does. That means periodically replacing your bandmates, and in this game, that means giving them short contracts and seeing if you can hire someone more talented when their contracts are up, or nearly up; the less talented they are, the shorter the contract you should offer them.

The downside of firing or not re-signing bandmates, though, is the bigger possibility they’d sue you, though in most cases, you’ll only be docked a small percentage of your funds if you lose the case.

7. Be Aware That You Can’t Control Most Random Events 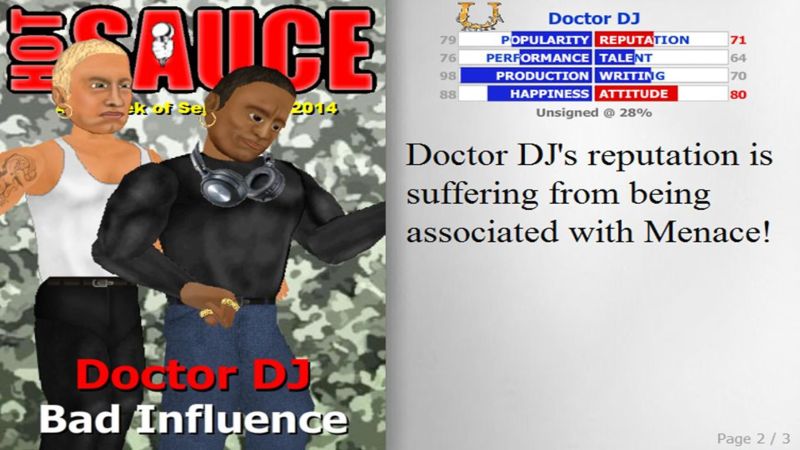 As you keep playing the game, you’ll find yourself in court every few months or so – someone may have complained that your song’s lyrics are too controversial, a record label head may claim that you plagiarized their act’s song, you may be behind on your taxes, you may have underpaid your old bandmates. And none of these things may be true. Most of the time, these events will happen beyond your control, so our only advice here is to hope the judge rules in your favor. Usually, but not always, a good Reputation makes you more likely to win your case. If you don’t win, then let us reiterate that it usually amounts to a mere slap on the wrist in terms of fines.

There are other random events, such as nominations for award ceremonies (good for Popularity/Reputation), or “diss records” released by competing artists (bad for those stats). In both cases, you can’t control those either, so just grin and bear it if Dusty Beaver (Justin Bieber parody), for instance, releases a record badmouthing your band. Do well in your gigs and release strong singles and you’ll get that Popularity and Reputation right back.

8. About Playing Gigs Or Concerts

Most of the time, your boss will tell you that you have to play a certain number of songs at a live event. Other times, you can just play one or two songs and be done with it. Take advantage of those opportunities and make sure to select your highest-rated songs, for better chances of a well-reviewed gig. Gigs that get good reviews help increase sales and chart positions, and in turn adds to your total funds.

Generally speaking, you should always play your best songs at these events, and save your best song for last; we tried playing around with song orders and it doesn’t seem to matter much whether you end with a slow, fast, or normal song, like it often does in real life.

9. How To Deal With Other Musicians

Sometimes you’ll be approached by another musician who wants to sell you their song, or perhaps remix a song of yours to make it better. For the former, don’t buy it unless they’ve got good Writing stats, and for the latter, look at their Production stats underneath their name to determine whether your song deserves a remix or not. Despite their obvious disappointment if you refuse, they won’t take it against you in the grand scheme of things.

10. Do What Your (Major) Label Head Tells You To 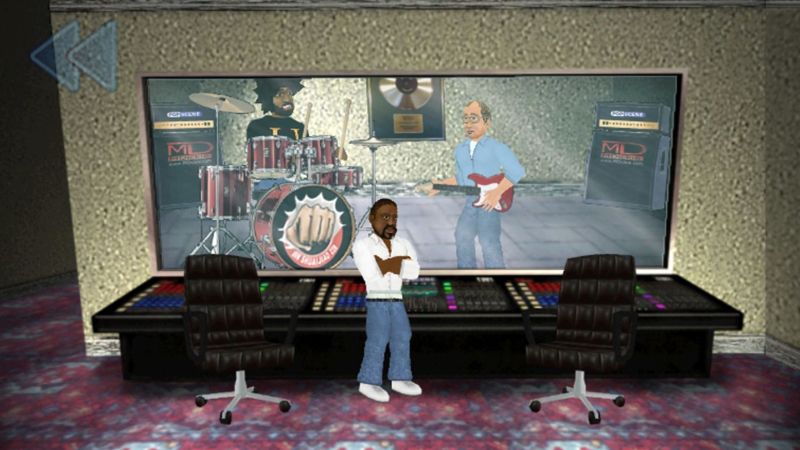 Your boss will sometimes tell you to do something by a certain week, such as firing a bandmate, hiring someone to join your band, releasing an album by a certain date, etc. Always do your best to do what the label head tells you, because with the exception of The Underground’s boss, you’ll get a lot of money as a reward for completing these “quests.”

11. How To Release New Singles / Albums

You don’t necessarily have to wait until your single or album is out of stock. If these releases stop being profitable, or are selling less than 50 percent of their peak sales, you can release a new single or a new album (provided you have six songs or more – anything less will be poorly reviewed) to keep the momentum going and the money coming in. Just make sure that if you’re releasing a new single, it’s got more stars and/or hearts than the average song in your album.

Want some more advanced tips and hints for Popscene? In the meantime, we’ve come up with some cool tricks, that you should check out right here.

How do u fire someone?

@Tsu, got to recruit click the person you want to fire and acept the money that they want and boomn

This website has helped me and thank you for sharing this