As we all know, Wild West was notoriously violent. As a result, this period in American history inspired a lot of movies and books. But now you can also get a taste of the Wild if you decide to play Pocket Cowboys. Created by Foxglove Studios AB, this mobile game is available for your Android-powered devices.

With 8 distinct maps and 12 character classes, Pocket Cowboys could seem like a small game. On the contrary, this game can provide you with hours of entertainment. After all, the sense of danger and the adrenaline rush are what made the Wild West so attractive.

But, the gameplay is not simple either, so you will need help. That is why our list of the most important Pocket Cowboys tips, cheats and tactics will improve your odds of surviving in this harsh and inhospitable environment. Saddle up and let’s go shoot some bandits!

1. Be Quick To Shoot, But Don’t Rush Your Moves

Pocket Cowboys is a PvP strategy that features a turn-based playing system. What this means is that players make their moves in secret, and then the outcome reveals the success of those moves. The movement of the characters through the grid allows the game to be dynamic and captivating. In a way, you will often feel like you are playing a game of chess. 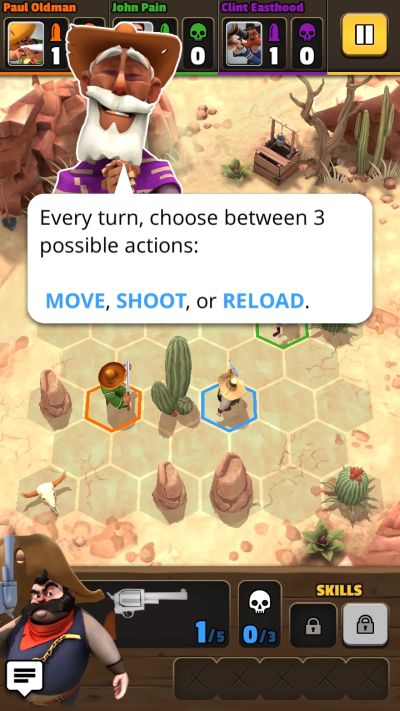 For this reason, we want to advise you not to rush your moves. After all, you have 15 seconds to decide what will be your course of action. At the same time, we need to warn you that those 15 seconds can pass by before you even know it. Of course, the timer in the center of the screen will warn you when the time starts running out.

In short, your moves require speed because of the format of the game. But, the strategic approach to every move is equally important. So, try to balance those two when playing Pocket Cowboys.

2. Assemble Your Gang And Upgrade The Characters

A number of different characters await you in Pocket Cowboys. Later in this guide, we will elaborate more on their strengths and weaknesses. For now, let’s see what you must do to assemble the most powerful gang the West has ever seen. 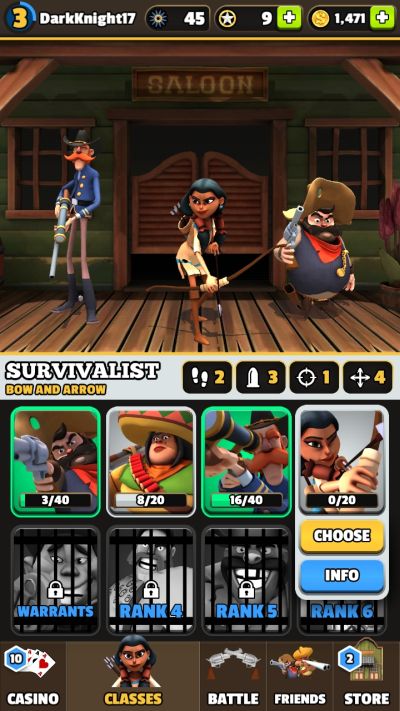 At the start of the game, your gang will consist of three members. As you go through the game, new shooters will join the party. Of course, you need to earn a certain amount of gold or EXP to unlock some of the classes.

Either way, once you unlock a new character, he or she will appear in the selection screen. By clicking ‘Classes’ at the bottom of the screen, you will be taken to this section. Also, this area is the place where you can pick your champion for the upcoming shootout. At the same time, you can also upgrade the class of your character. By doing so, their features and characteristics will improve, allowing you to take down the enemies without much hassle.

3. Choose The Marauder For Close Combat

Now that you learned how to assemble your band of misfits and how to upgrade their stats, it’s time to present some of the classes. As we said at the beginning of our Pocket Cowboys, this game features 12 unique classes of heroes. All of them can cause bloodshed on the battlefield, but some come with better capabilities than others. Here is one such example.

The Marauder is one of the classes that you will unlock at the early stages of the game. He is portrayed as a chubby Mexican, but with a menacing stance and a look that can shoot you on the spot. Moreover, his most important feature is the sawed-off shotgun. This compact but powerful weapon could seem a bit barbaric, but in the Wild West – it is perfect!

4. Use The Sniper To Make Kills From A Distance

The turn-based system in Pocket Cowboys requires some time to get used to. But, once you grasp the basics, you will easily travel across the playing board. After all, the town ain’t big enough for all the desperados out there. 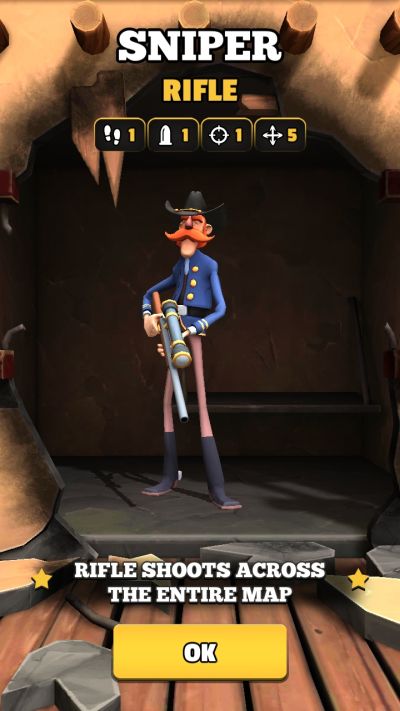 Since moving across the board eats away from your precious time, the Sniper guy can be the best option in certain situations. Judging by his uniform, he is probably an ex-military who went rogue and decided to take justice into his own hands. Lucky for you, he wants to be a part of your gang.

The Sniper can lock on a target from a great distance, allowing you to kill the enemy without much effort. However, the other gunfighters are always on the move, so you need to predict their position in advance. For that reason, Pocket Cowboys resembles a chess game at times.

5. Go On A Kill Streak And Boost Your Rewards

Even though Wild West was a violent and brutal area, it still had its laws and legislation. For example, sheriffs and marshals could declare that someone was ‘Wanted’, and a whole bunch of bounty hunters would set off in pursuit of the criminal. When it comes to Pocket Cowboys, becoming a Wanted man is a positive thing and it has its perks. 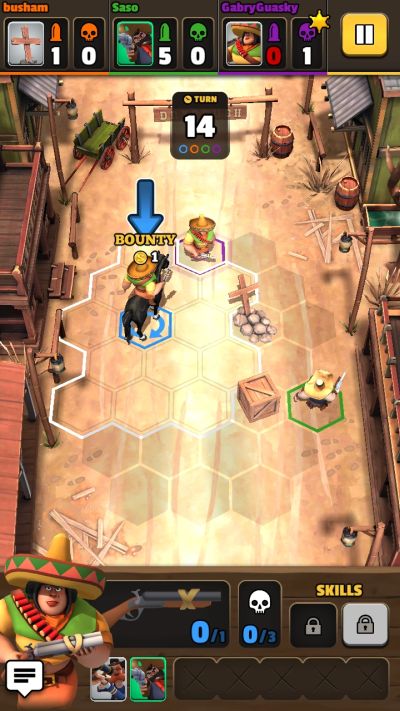 Once you start playing the game, you will be making a kill after a kill. Of course, after every gunfight, the players share the loot. But, if you make three or more kills in succession – your rewards could significantly increase. The game calls this bonus feature a kill streak, and you only need to avoid getting shot while you collect those kills.

The more kills you align, the higher your Wanted status will be. Consequently, the bounty after the clash will receive a boost as well. To sum up, try to go on a Killstreak at every opportunity.

6. Open Up The War Chest

When it comes to in-game currencies, Pocket Cowboys uses a multi-currency system. But, the most valuable of those currencies are stars, without a doubt. Consequently, the stars are rare, and it is not easy to find them. In other words, ‘to earn them’ because they are predominantly awarded after every battle. So, don’t be lazy, get out there, put on your Stetson and join the rodeo!

The stars can unlock many things in the game, but one of the most important ones is the so-called War Chest. Before you engage in a clash with the desperados, you will see a chest below the button to start the battle. Well, that particular chest is full of goodies that can help you progress through the ranks and unlock all sorts of stuff in Pocket Cowboys.

Also, the War Chest requires that you collect ten kills before you become eligible for the rewards. The markings next to the chest serve as a progress bar, and they will tell you how many heads you need to collect.

7. Claim The Rewards In The Casino

Another way to collect the gold and a couple of stars is by visiting the casino. Yes, Pocket Cowboys features a proper casino, with poker cards and all that. After all, can you imagine a saloon in a western movie without a poker game? Your cowboys also need to unwind and relax, and a winning hand of poker is the best way to raise one’s spirits.

The casino section can be accessed from the lobby screen. By clicking the first icon from the left-hand side you will enter this room. We advise the players to pay attention to the small notification in the corner of the casino icon. This number indicates that some rewards are waiting to be collected.

After every clash with the outlaws, you will receive certain rewards. More often than not, a couple of poker cards will be a part of the bounty. So, pay attention to those moments and visit the casino to claim the rewards at every opportunity.

8. Play The Game With Friends

Even though Pocket Cowboys is a game with retro motifs, it still incorporates certain modern elements. For instance, this game allows you to play against your real life friends. By using the PvP option, you can engage in a Deathmatch full of excitement. As well as some carnage and massacre. But hey, that’s the Wild West for you. 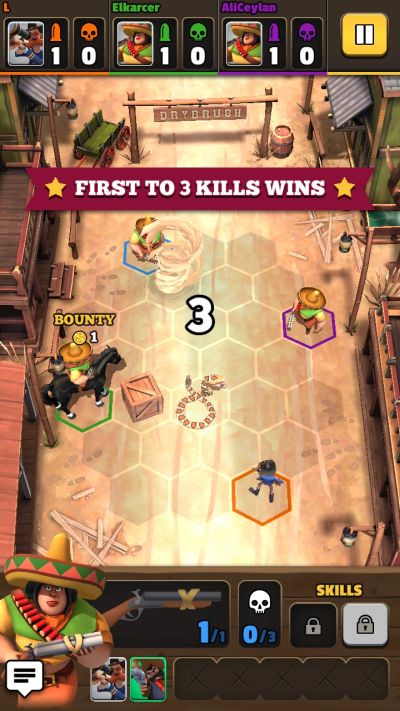 On the bottom strip of icons, you will find the ‘Friends’ command. After clicking on this option, players will have an opportunity to connect with Facebook and challenge their friends. Therefore, Pocket Cowboys allows you to play via social media, which is a modern element in the gaming world. Try the game with your friends and enjoy using the secrets you learned in this Pocket Cowboys guide.

This tip wraps up our comprehensive overview of the most useful Pocket Cowboys tips, cheats and strategies. If you happen to know any other tips or tricks, please leave us a message in the comment box below!