By mixing several gameplay types, Piggy GO creates an unpredictable playing environment. Developed by Forever9 Games, this mobile game will provide you with a lot of fun. So, download it to your iOS or Android-powered device and let’s take the piggy on a journey around the world.

However, Piggy GO can also be a bit overwhelming to new players. To clarify, the colorful surroundings could be confusing, making it hard to collect the gold and progress through levels. Well, our comprehensive list of the best Piggy GO cheats, tips and strategies can be of use in those moments. Therefore, let’s go through these tips one by one to see how you can build the wealthiest empire ever.

1. Use Autoplay To Throw Dice

When playing Piggy GO, you will be rolling dice all day long. In other words, the piggy will move along the board when you throw the dice. The higher the number you get, the longer you will travel on the board. So, luck will be the overriding factor when playing this game. But there are certain methods and tricks that can help you collect more gold. 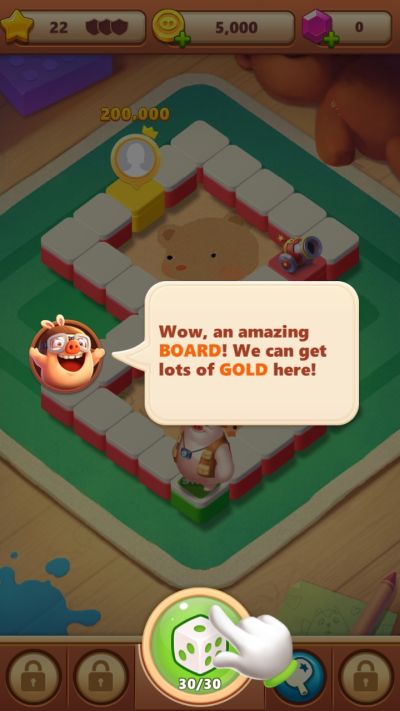 For example, players should activate the Autoplay mode as soon as possible. By pressing the big icon at the bottom of the screen and holding it for a couple of seconds, this automatic mode will be activated. As a result, the dice will roll without your direct interference. As long as you have some moves left, the Autoplay will let you throw dice in a fast way. Thus, the piggy will visit a lot of positions in a short timeframe, allowing you to collect a lot more gold.

Besides the board and a pair of dice, you will have a wide array of other options at your disposal when playing the game. For instance, you will have a chance of developing cities and making them big and strong. To perform such an action, it will be necessary to splash the cash. In other words, a certain amount of gold is required for each of the upgrades. 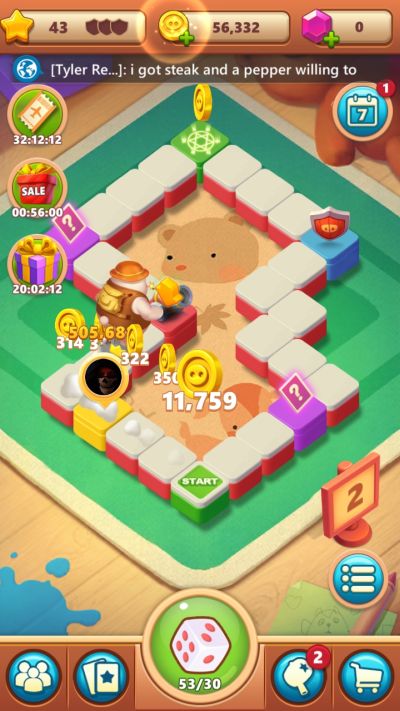 So, to invest the coins, you need to click on the second option from the right at the bottom of the screen. Yes, the name of this section is ‘Build’, which is pretty self-explanatory. By visiting this area, players can invest in reconstruction. And, all the money you spend here will improve the defense of the city. While rebuilding, you will have a plethora of options for investing the gold. The only thing you need to check is whether the numbers on the price of the upgrade are white. If yes, then you have enough coins in the bankroll to make the purchase.

In order to conquer the world and expand your empire, you will have to be able to travel. Well, that is the reason why repairing the airship should be on top of the list of priorities when you start the game. As you can guess, the airship will take you to different cities, allowing you to collect tons of coins.

However, you will need gold for repairing the airship in the first place. For that reason, we recommend going into raids. In essence, raids will let you visit the neighbors, but not with friendly intentions. In other words, you will visit the other players looking for a way to grab hold of more coins. So, make the most of these trips and let the piggy jump around on the playing board. After you spend all the available moves and roll the dice a certain number of times, the raid will end. After that, you will know how many coins you’ve collected.

4. Teleport To Other Cities To Earn More Coins

So, once you repair the airship, you will be able to expand your empire. Well, the map in the bottom right corner can show you the nearby cities. Starting from Havana, over Mexico and the Caribbean, all the way to New York and across – all these cities are waiting for you to claim them. For that reason, it is imperative that you master the art of teleportation as soon as possible. By doing so, you will jump from one location to the other in a flash. 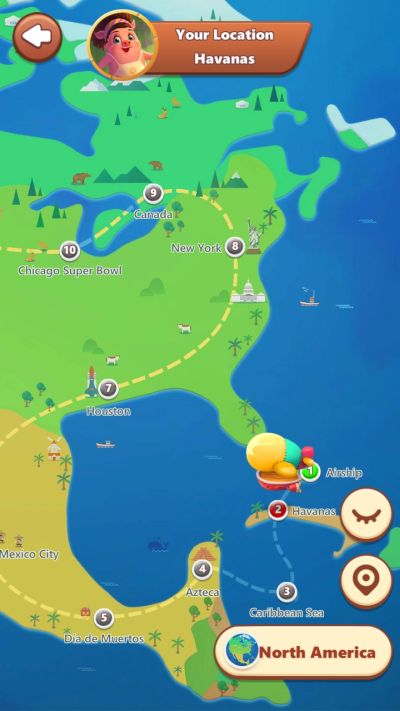 To activate the teleport, the piggy will need to step on a specific position on the board. To be precise, this green button stands out from the rest. For instance, there is a pattern similar to a spider web painted on this playing field. As soon as luck takes you to this spot, the game will teleport you to a new location. As we said in the previous chapter, you will ‘pay a visit’ to one of the surrounding players and raid some of their wealth.

One of the drawbacks of going out on raids in Piggy GO is the fact that you will leave the base unprotected as you travel. In other words, your city will be vulnerable at those moments. Of course, the enemies will try to make the most out of this opportunity. Thus, they could steal a lot of coins if no one’s home.

However, there is a method that can keep your base safe and secure. Yes, we are talking about the shields, and players can have up to three of them at a time. As you could guess, the purpose of those plates of armor is to keep the enemies at bay. Once they launch a missile towards your city, the shields will intercept the attack. For that reason, try to step on a specific field on the board which has a shield hovering above it. As a result, you will be rewarded with a piece of armor. After that, the shield will be ready to serve as a protection unit.

6. Enjoy The Sweet Taste Of Revenge At Every Opportunity

Even though the shields are powerful, they will not keep you safe and protected at all times. After all, you will not have enough of them to brush off all the attacks. So, sooner or later, your defenses will be breached and the city will be demolished. On top of that, the enemies will hijack a lot of gold from the treasury. 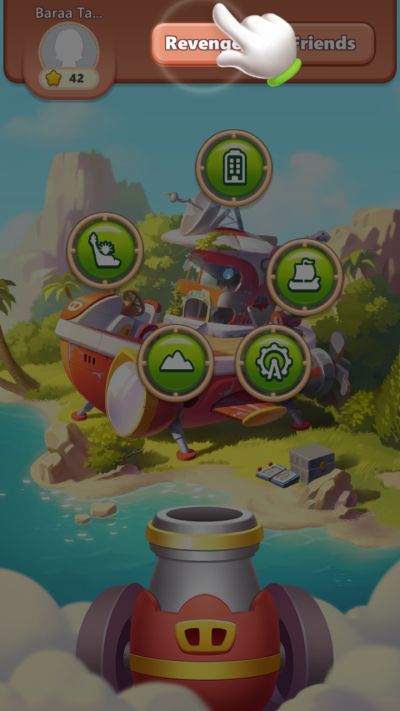 Well, Piggy GO allow players to express their emotions and seek retaliation. To clarify, once you step on the Cannon on the board, you will be offered the possibility of taking revenge on the enemy who raided your city. We recommend that you accept the offer every time. By doing so, the cannon will be ready to send a projectile on the enemy’s citadel. Of course, if the attack goes well and you damage some of the buildings, a large prize could go your way.

7. Make The Most Out Of The Bonus Round

Every now and then, the game will reward players with a bonus round. And, we want to help you maximize the yield when bonus features get activated. First of all, the trick is in the timing. So, the slider at the lower part of the screen will travel left and right when you enter the bonus section. At a certain point along its path, this slider will meet with a yellow marker. Well, the trick is to press the big green button at the moment when the slider and the marker are at the same spot. 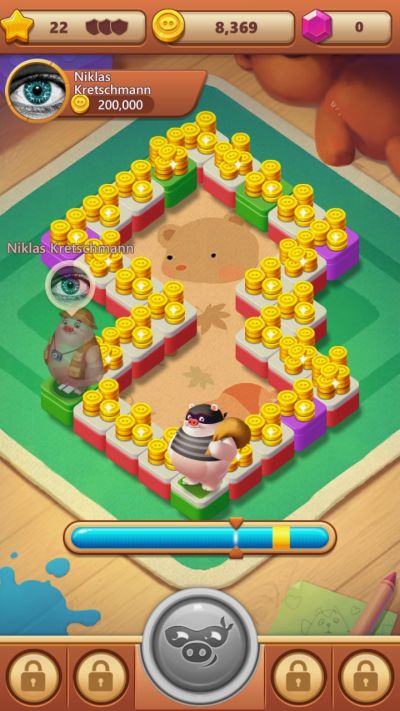 Since the slider is not moving at a super-crazy speed, you should be able to measure the shot and make the move at the right time. The closer to the marker you stop the slider – the more coins will go your way. Speaking of coins, the game will also reward you for the daily logins, so make sure to go back to Piggy GO on a regular basis.

In case all of the raids and the bonus features leave you hungry for more gold, head over to Lily’s kitchen for extra cash. If you are wondering what is the kitchen that we are talking about, we will explain right now. So, Lily is one of the characters that appear in Piggy GO. To be clear, she will not be available at the very beginning, but as you progress through the game – the kitchen will open its doors for you. 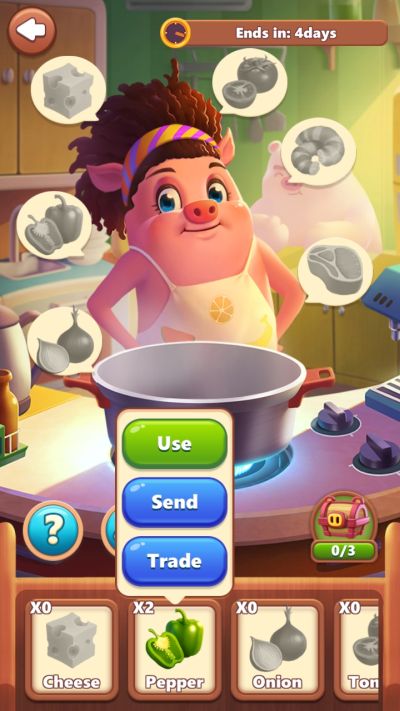 In order to receive gold or other rewards from Lily, players need to do a favor for her first. To clarify, you will need to bring vegetables and dairy to the kitchen. For example, you could bring her some tomatoes, onions, peppers, and so on. Once you deliver enough food so that she can prepare a meal, your efforts will be rewarded with a lucrative gift.

With the final tip, we wrap up our in-depth guide for the game. Even so, if you know any other Piggy GO cheats, tips or tricks, make sure to leave us a comment below!

As lili when dresses I the angel outfit does anyone know what the little fairy girl does who follows you around?

How do I keep my food for the next weeks menu there are people saying when 1 menu ends their food transfers to next menu anyone know how to do this ...thanks

If I don't want to play with the same dice all the time how do I change it, to a different one?