After taking a couple of years in development, Badland Brawl is finally out and is showing a strong start. Mere days after its release, this physics-based brawler game has already garnered millions of downloads on both Android and iOS platforms. The game is Frogmind’s first venture outside of the auto-running genre after the critical and commercial success of their original title, Badland.
In Badland Brawl two players face off in a match, each with a tower on his/her side. The goal is to take down the opposing player by sending out troops. Instead of merely placing troops on the map, however, players will need to slingshot their troops into position. The physics-based tossing of minions onto the map adds a level of difficulty since players will have to quickly gauge the distance and angle of their shots to ensure victory. 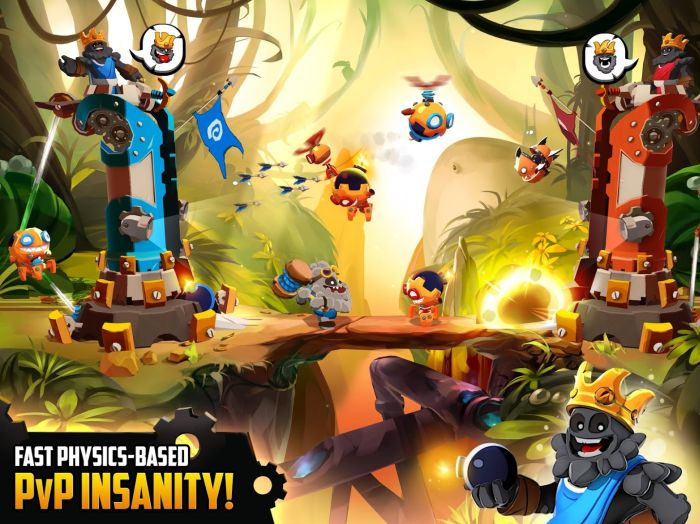 Similarly to other brawler games, a guild system called Tribes is in place. Members of the same Tribe can share Clones and participate in practice duels. Apart from the classic 1v1 duels, the game also features a 2v2 PVP system where players can team up with Tribemates in order to unlock unique rewards for everyone in the group.

Badland Brawl is free to play but includes in-app purchases that can range anywhere between $1 to $104. These purchases can be used to unlock and upgrade Clones faster. Since all player accounts are still new, rankings still have not stabilized and players can expect matchmaking to be skewed. A newcomer can easily end up facing a fully customized deck even in the early stages of the game. Players who want to prepare before jumping into the game can check out our Badland Brawl beginner’s guide for some pretty cool tips and tricks.

The combination of the old Badland visual aesthetics with the new brawler strategy mechanics has managed to attract both veterans and newcomers to this game. Will the familiar characters and PVP competition be enough to sustain the initial rush? Now that interests have been piqued, only time can tell whether or not it can live up to the hype it has created.

You can grab Frogmind’s new mobile game Badland Brawl for free today from the App Store or the Play Store.