It may have been quite a while since we got to watch Peter, Samir, Michael, and the rest of the Initech gang on film, as Office Space is quickly nearing its 20th anniversary. But that didn’t stop AdVenture Capitalist maker Kongregate from releasing a new idle clicker based on the Office Space franchise, and it’s called Office Space: Idle Profits. As a disgruntled Initech employee, you’re facing the axe as layoffs may be forthcoming, and it’s your job to “get back at the company” with the help of the aforementioned characters, as you try to install a virus into Initech’s mainframe. That virus will suck pennies out of each department and fill up your retirement account with cash, and the company will be none the wiser. But how much money can you siphon out of Initech, and how quickly can you do it?

Aside from the tapping and idle clicking mechanics you should know from other games of its kind, the game comes with other features, such as office parties, which are scheduled events where you can win rare items. You can also rip off Initech for an unlimited, endless period of time – like in other games in the genre, there’s no real end goal, just stress relief as you try to earn more money faster than you did the last time around. And we’re here to show you how to do it, through this Office Space: Idle Profits strategy guide.

1. You Don’t Need To Tire Yourself Out Tapping

These days, idle clickers appear to have taken over from traditional clicker games, meaning you no longer have to tire your fingers out tapping as quickly and as frequently as possible. When game makers say that their idle clickers are a form of stress relief, they mean it. That’s the case with Office Space: Idle Profits, and while you can tap in order to earn extra money, you really won’t be getting much as compared to the money you can earn from the offices. 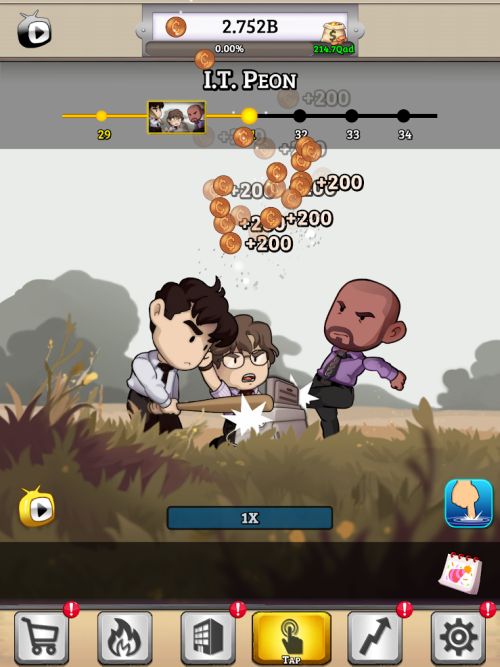 As a bonus tip, you’ve got an instant tapping power-up that could help make the tapping and money-earning processes easier. You’ve also got interns that you can tap on, so there is still some tapping involved in this game. Tap like crazy if you want to earn some extra money in a hurry, but don’t tire yourself out doing it – it’s not absolutely necessary that you do so.

2. Upgrade Whenever And Wherever Possible

Now if you’re really looking to turn a handsome profit in this game, what you will need to do here is to buy office space – literal in-game office space, and not the game itself, as it’s free! You will also have to upgrade the offices you have, as that will be important as you try to generate more profits. But there’s a bit of a method to the money-earning madness, as you’ll need to find some sort of balance between lower-level upgrades and higher-level ones. The former will earn you small amounts of money at a fast pace, while the latter could earn you a ton, but have you waiting a while before you can realize those big profits.

3. Upgrade While Keeping Milestones In Mind 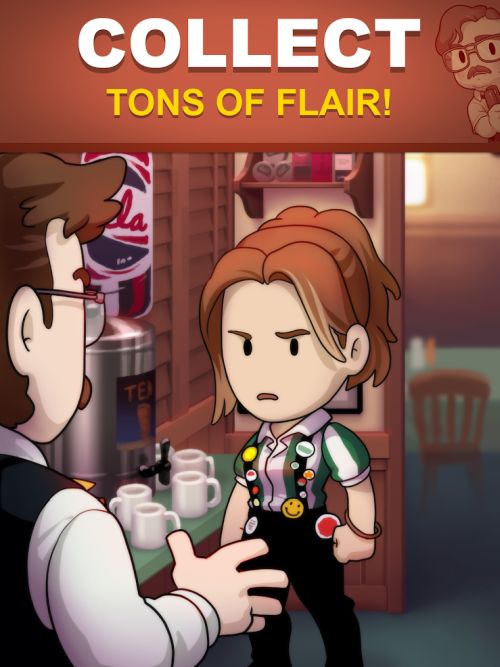 When we refer to “upgrades,” we’re not referring to the upgrading of offices as we had told you in the previous tips. We’re referring to the ones you can buy by tapping on the arrow button in the main menu. To be frank, the best term for these “upgrades” would be “power-ups,” as they could increase the amount of money you can earn each time you tap on the screen, give you extra interns, or boost the revenue of specific rooms. But watch out, as these power-ups can get expensive real quick! What should you do when you reach such a point?

Once your upgrades get to be a bit costly, you can focus on the ones that specifically increase office revenue, then focus on the ones that give you additional interns. Alternately, you can focus on the tapping power-ups as a second priority if you’re one of those players who appreciates the non-idle aspect of idle clickers. Chances are you’ll be buying all of the available upgrades/power-ups, so you have to be sure you’re keeping the order in mind – you’re trying to earn more money the smart way, after all!

5. Get Your Free Characters

Office Space: Idle Profits will reward you every six hours by allowing you to head to the in-game store and get a free character. Unfortunately, the game still won’t notify you when a new character can be redeemed for free, so turning on your notifications won’t do the trick. We hope this gets fixed in a subsequent update, but in the meantime, you’ll have to do this manually. With that out of the way, make sure you’re counting six hours as much as possible, because new characters can actually help you progress further in the game.

6. Tap On The Icons If You Can Catch Them 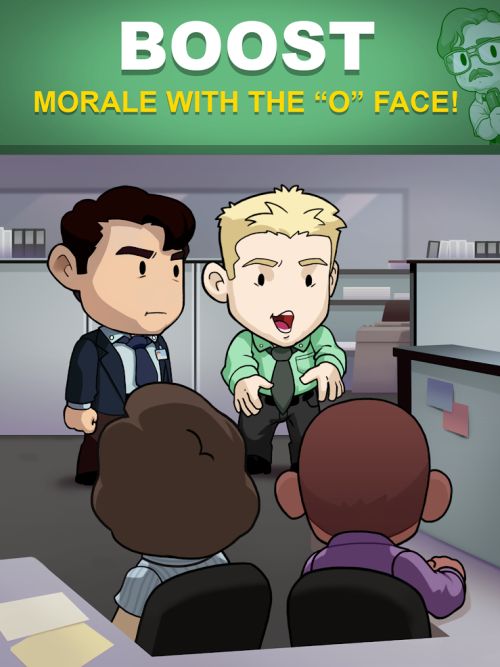 Want to earn even more money? Look out for those icons that appear from time to time above the employees’ heads. Tap on this icon and you’ll get some instant cash instantly – we probably shouldn’t say “some,” but rather “a ton” of cash! The catch here, however, is that you need to be very quick – blink and you’ll probably miss that icon!

Office Space allows you to watch advertisement videos so you can double your earnings for a four-hour period. All in all, you’re allowed six ad videos a day, so that’s basically a day’s worth of double earnings if you’re able to watch all the videos allotted to you. Being able to earn double profits for all 24 hours in a day is no joke, so watch as many videos as possible, as that’s going to be a huge boost as you progress forward and earn serious in-game money.

8. Assign Characters To Their Ideal Roles

You shouldn’t be assigning the Office Space characters willy-nilly – you have to check their information before taking any action, and assign them with their bonuses kept in mind. For instance, let’s take a look at Milton – he should be assigned below the top three levels, as that’s going to ensure the key money-producing units get his bonus. The placement will vary depending on the character, but you get the idea. Assign them in a way that everyone can benefit from the characters’ unique effects, as that’s going to ensure you earn the most money possible.

We’re going to talk about the game reset/prestige mechanic in a bit, but before we do, we should also let you know that once you assign characters, their levels won’t change once the game is reset. That means you don’t need to reassign them each time you reset/prestige. Set them up and assign them to their ideal spots, and feel free to leave them there, at least until you unlock a new character that may be better-equipped for working a specific position.

9. Burning It – The Process Of Prestiging

Just as we promised, we’re going to be talking about the prestiging mechanic for our final tip, and not referring to it as such now that we’ve gotten that out of the way. In Office Space, the term is “Burning It,” and that’s the equivalent of resetting the game and starting from square one. Normally, if you’re an active, everyday player, you would usually be Burning It every morning, or whenever you wake up. Do this once you’ve collected your earnings, and preferably watched an ad to double them. 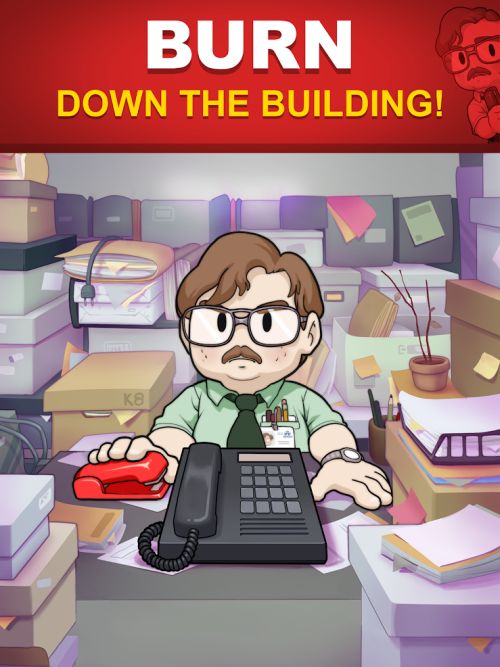 As a general rule, you should be Burning It once a game reset will result in a substantial bonus compared to the last bonus you got for your last Burn It. As we mentioned above, you don’t need to reassign characters unless the opportunity arises, and they won’t be resetting in any way, meaning their effects will even be more prominent after the reset. Aside from that, you will be back to zero, but that’s the good thing about Burning It – you will earn more money and earn it faster, reaching the previous point of Burning It faster than you did in the last play-through.

That’s all for now, as far as our Office Space: Idle Profits tips, tricks and cheats are concerned. Do you know additional hints for the game? Feel free to share with us your thoughts in the comment area!