By playing Mr Bow, you will have a chance of realizing your childhood dreams. Yes, this mesmerizing arcade game can help you learn the basics of handling a bow and arrow. Created by Falcon Game Studio, the game is available for Android-powered devices. Once you download Mr Bow and start taking down various enemies – you will realize the beauty of this mobile game.

With its minimalistic design and intuitive gameplay, Mr Bow can be highly addictive. At the same time, this game requires a lot of patience. The reason for this is that the laws of physics behind shooting the arrows are not that easy to master. But, we are here to help. Our Mr Bow guide, will provide you with all you need to know to become the master archer. So, let’s get down to our 8-point list of Mr Bow tips, cheats and strategies!

Mr Bow is an exciting and entertaining mobile game. The main reason for this qualification comes from the mechanics of the gameplay. The goal of the game is to shoot down your opponents before they do the same to you. In the early stages of the game, those enemies will be static and even harmless. Later on, their skills will grow, which will directly affect your wellbeing. 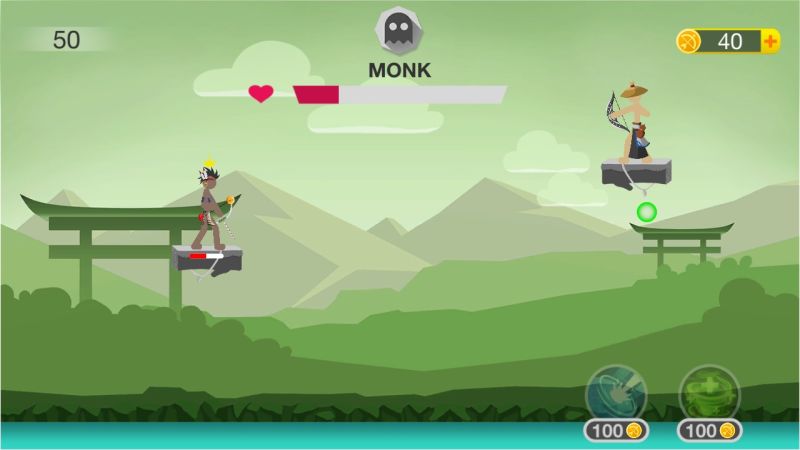 However, the first thing you will need to do when starting to play Mr Bow is to select the preferred play mode. At the lobby screen, you can choose between the two available options – Campaign or 2 Players. Both of these types have their unique features, and we suggest you give them both a try. As the name suggests, the Campaign will take you through quests with multiple opponents. On the other hand, 2 Players is a mode that lets you practice your skills with the bow and arrow. We recommend trying this mode against a friend.

As the title implies, your character in this game will be a skinny looking guy equipped with a longbow. Also, he carries around an unlimited amount of arrows. The word ‘unlimited’ is the key here because this feature will allow you to hone your skills to perfection. In essence, you will not have to worry about missing the target a gazillion times. As long as the guy pointing the arrow at your head does not hit his target – you’ll be fine.

But, it is imperative that you improve your skills as soon as possible. When releasing the arrows in Mr Bow, there are several factors you need to take into consideration. First of all, gravity will play a part. The longer the distance from the target – the more will the arrow drop down in the end. Similarly, the more you pull back the bow – the more speed you give to the arrow. On top of all that, later stages of the game will introduce moving targets, and this will complicate your calculations even more.

Even though this may sound a bit cruel – you should always aim at the opponent’s head when playing Mr Bow. Once you tighten your bow and prepare your arrow, try to bury the tip of the arrow right between the enemy’s eyes. Of course, minimalist graphics of Mr Bow will not portray this as vividly as we have done, but you get the picture. Headshots bring extra points, and that is why we recommend that you go for the head with every shot. 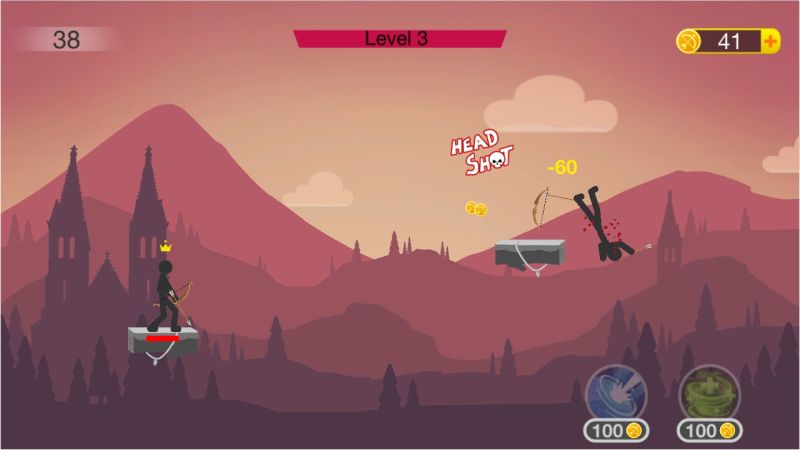 Even so, precision is can often be time-consuming. In other words, a carefully executed shot will require much more time than rapid fire. Due to this reason, the players need to observe the situation and create a plan of action. If you can spare the time to align a straight hit to the head – go for it. In any other scenario, release as many arrows as you can and hope to deal as much damage as possible.

4. Take The Surrounding Objects Into Consideration

At the start of the Campaign mode, the enemies will behave as static targets. They will be positioned on the rocks at various distances. Once you get a hang of tightening the bow and hitting them with the arrows, the game will increase in difficulty. Even so, our guide is here to provide you with the right knowledge to overcome the most challenging of missions in Mr Bow. 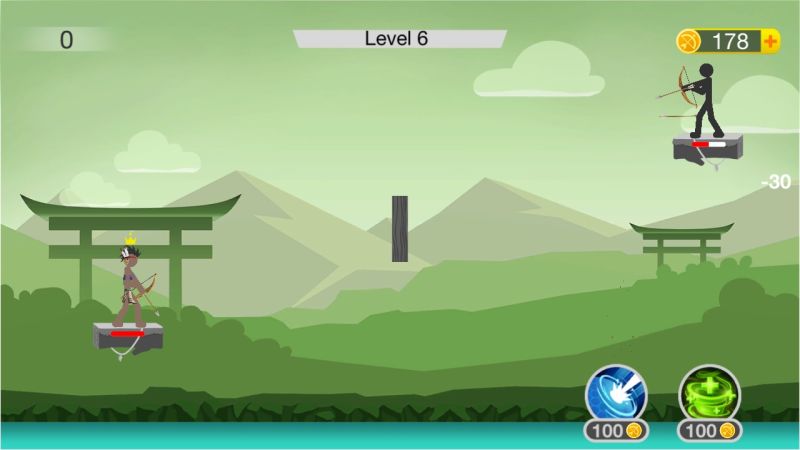 For example, certain stages of the game will introduce moving obstacles between you and the opponents. In other words, a piece of rock will fly up and down in the middle of the screen preventing you from making a hit. During those missions, we advise you to take your time and plan the shots in relation to the movement of the rock. Similarly, some stages will feature the moving positions of the opponents. They will also move up and down, and these moments will require a lot of patience. More importantly, you will have to use all of your high school knowledge of the laws of physics.

5. Get Help When Necessary

Even if you are a top-notch marksman, sooner or later you will come across an even better sharpshooter. Mr Bow is a game that progressively raises the difficulty bar. On top of that, we didn’t even mention the foot soldiers you need to eliminate before getting to the boss of every level. If any of them damages your health, you will have a hard time defeating the boss and progressing to the next mission. 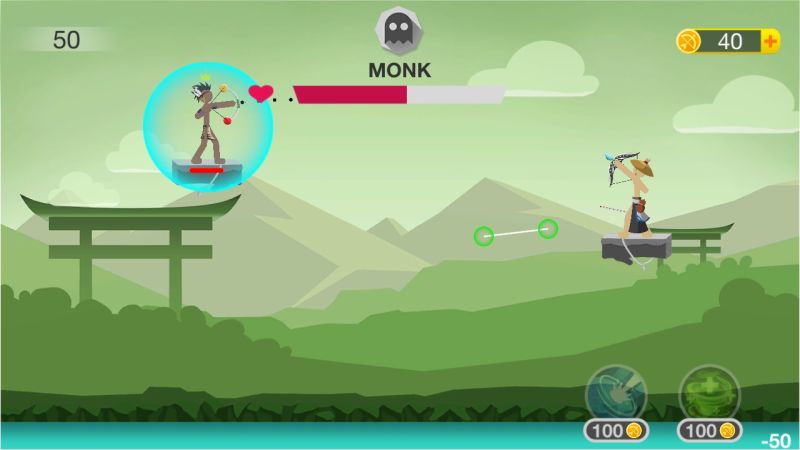 Fortunately, Mr Bow offers a helping hand during those moments. In the bottom right corner of the playing screen, you will notice two boosters. Both of these features will require 100 of your precious gold coins. Gold is the only in-game currency in Mr Bow. By investing a hundred coins in any of the boosters, you can temporarily upgrade the abilities of your character. The booster on the left acts as a shield. Once you activate this feature, a blue aura will appear around your bowman. On the other hand, the booster on the right helps you heal your warrior. Both of these buffs are valuable, so use them with care.

At the end of every stage in Mr Bow, a boss fight awaits you. Numerous creative characters will step into the arena with you, aiming their sharp arrows into your avatar. From special ops guys to samurai warrior or robots – you name it. Mr Bow has it all. But, the majority of these opponents are easy to deal with, as long as you fire quick and relatively precise shots.

With the help of the boosters and a bit of luck, you will be taking down the bosses one after the other. More importantly, Mr Bow arranges the stages in groups of three or four. These clusters of missions are called a blacklist. Once you defeat all three or four bosses on the list, you will receive lucrative rewards for these combo kills. But, there is a catch, as usual. The blacklist can only be completed in one go, i.e. without losing a life. If you get killed, you have to go all over again. So, take care of your health bar and improve the quality of your marksmanship!

Since losing all of your health can mean the loss of progress on the combo kills, the players should do anything to stay alive. But, the opponents in Mr Bow are not going to stand idle and wait for you to recover. Instead, a constant barrage of arrows will fly towards your position. Inevitably, some of them will hit their mark. Furthermore, some of those will hit your character on the head, delivering massive blows to your health. 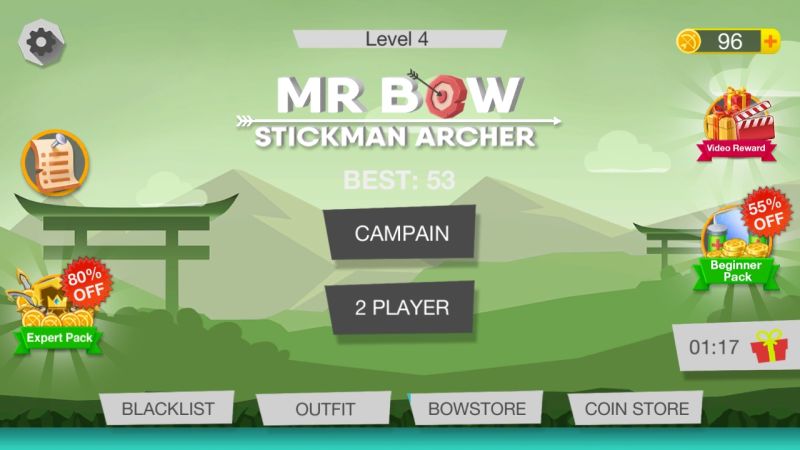 When you get killed by the enemy, you lose all progress on a blacklist. But, Mr Bow provides you with a simple solution that can prevent such a scenario. What we mean by this is the fact that the game will offer you a chance to continue where you left off. The only thing you need to do is to watch an ad. Typically, an ad will last for about 20 or 30 seconds. Either way, we advise you to invest those precious seconds of your day to preserve your progress and continue releasing dangerous arrows at your opponents.

8. Change The Bow And Your Outfit

Mr Bow is a colorful mobile game, full of unusual characters. The action in the game takes place in various locations. Since the shooting range is dynamic, it makes sense to assume that you can also change the appearance of your character. Mr Bow enables this feature, and the players can buy a new bow or equip their avatar with fancy new clothes.

At the lobby screen, the players will find the options that will take them to these stores. The shops are separated from each other. In the bow store, the players can unlock various bows. Some of these can significantly upgrade your marksmanship. That is why we advise you to invest the coins in buying a new bow. Also, you can watch an ad to receive some more gold coins. The same principle applies to the Outfit store. To be honest, a new outfit is only a cosmetic change. But, even these changes can add to the fun of playing Mr Bow.

With this final advice, we conclude our 8-point list of Mr Bow tips, cheats and strategies. In case you are familiar with any other helpful Mr Bow tips or tricks, please drop them in the comment section below!