Might & Magic Heroes: Era of Chaos is an epic strategic RPG from Ubisoft, that’s available on iOS and Android platforms. In this game you help Catherine Ironfist to restore the Kingdom of Erathia that has been destroyed by war. Your objective in the game is to summon units and upgrade them to create the best possible army and clear all the content.

If you are a new player and aren’t sure of where to start, read our Might & Magic beginner’s guide, as it’s jam-packed with tips, cheats and strategies, so you can progress through the game faster!

1. Play The Tutorial To Earn Extra Rewards And Learn The Mechanics

There is a very well-made tutorial that you can access from the Training Grounds in your town. From there you can choose between three different training camps, although when you are just starting out only one will be available: the basic training one. 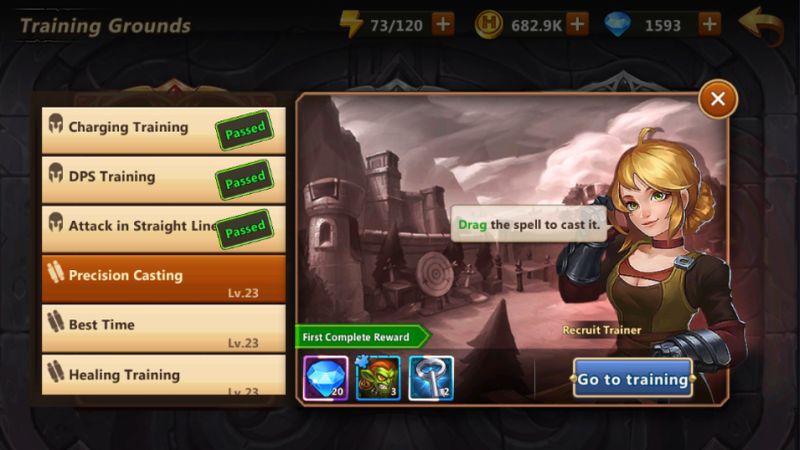 In these camps you will be faced with challenges and scenarios that are there to test how much you really know about the game, and they give you tips and tricks to learn how to make use of the different mechanics that are being explained.

You gain some nice rewards the first time you complete each training, and the tutorial is very well-made, so you should definitely try the levels out as soon as you unlock them. You unlock the various levels by increasing your player level.

Units will march forward in battle, and if there’s nobody on their path, they will wrap around and focus on the enemies in the backrow. This means that it’s very important for you to protect units in the backrow, who deal the bulk of the damage, from the enemy units.

Right before starting a battle you will be presented with the Battle Formation screen, in which you can rearrange your units’ placements and ensure you can protect them to the best of your ability. 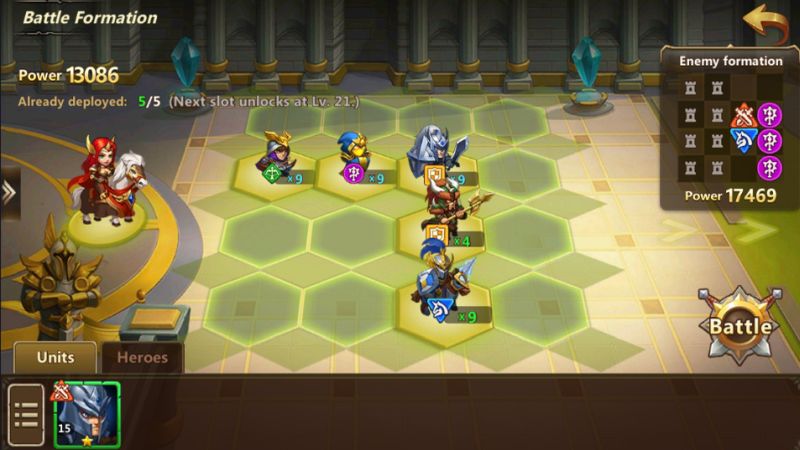 See where the enemy units are positioned on the front row, and try to match as many of them as possible with your own troops. In some scenarios early in the game you might not be able to cover all 4 of the front slots, in that case move your back row troops as far away from the open slot as possible.

You can also check which units you are facing. This is important information when you are faced with units you don’t know, especially when you want to cast spells on them. Checking out the enemy stats allows you to quickly figure out the best course of action. 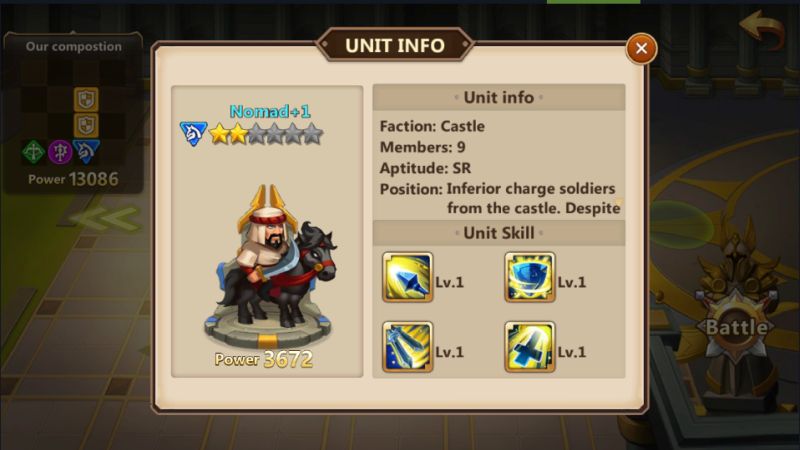 You need to especially wary of the Charge units, the units represented by the blue icon with a horse’s silhouette on them. Those units can quickly reach your army’s backline and deal massive damage to it.

Another thing to pay attention to is what enemy units can do in a fight. For example, Firebird deals massive damage in front of it, so don’t place your backline units on the same row where there is a Firebird. Also, make sure your units don’t end up clumping up because of your formation, or AoE spells (spells that hit all of their enemies in an area) will hit many of your troops and cause massive damage.

3. How To Make Your Units Stronger

The main objective of the game is to build a powerful army and clear all of the story content, as well as participating in battles in the Arena against other players and try to climb the rankings for extra rewards.

First, you need to summon units to be able to use them in your formation. You can summon units by earning enough shards of them. Every unit has its own stats and belongs to a specific faction. You can check the stats of your units in the “Units” screen by selecting which unit you want to inspect. 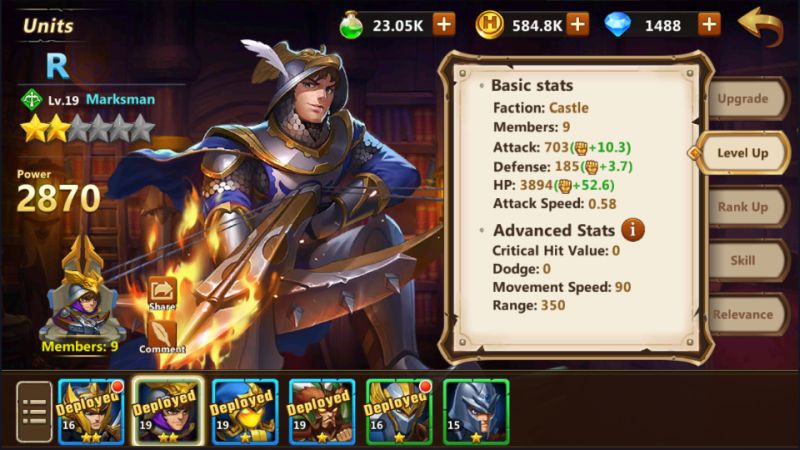 Once you have summoned a new unit, they will start at level 1. Units earn experience by fighting, or you can use experience potions to get them up to speed quickly. Every unit’s max level is equal to the player’s level, so if your player level is 19, the unit’s max level will be 19.

Units have a color that depends on their gear. You first need to upgrade all four pieces of equipment to the stronger color before you can upgrade the unit as a whole to the same color. So if you have a green unit you will first need to upgrade all of your gear to blue before being able to rank up your units to blue. Upgrading the unit’s color will unlock extra skills for it, for example a Blue Cavalier unlocks Glorious Charge, an ability that increases Cavalier units’ Crit Hit by 100%. Every piece of gear requires a specific item to get upgraded, and you can tap on these items to see how to obtain them.

Every unit can have up to six stars. Units start at one star, and you can increase their star value by finding more fragments of the unit. You can spend fragments to increase the unit’s stats in the “Rank Up” screen, and once you fill all the slots by expending fragments you can get an additional star onto your unit, which becomes much stronger.

The last thing you can do to improve your units is making use of their Relevance skills. Some units become stronger or unlock extra bonuses when you run them with specific heroes. For example Swordsmen turn into Iron Crusaders, a much stronger unit, if run alongside Catherine Ironfist. Units also unlock extra abilities at level 24 and 32, based on their faction and their class.

There are four classes in Might & Magic Heroes: Era of Chaos:

Defensive, charge, and offensive units go in the two front rows, whereas ranged and caster units go in the two back rows. Ranged units should stay in the row that is most in the back to maximize their damage, while casters are better in the 2nd to last row.

4. How The Heroes Work

There are 16 heroes in Might & Magic: Era of Chaos. You start the game with Catherine Ironfist, and you can unlock the others by finding their respective fragments, or by purchasing them in the Champions Store. Heroes don’t fight, instead they lead your army, and can occasionally cast spells during a battle.

Some heroes combine well with certain units, making them stronger when you run them together. For example, you can run Catherine Ironfist and Swordsmen together, if you do so, your Swordsmen will enter the battle as Iron Crusaders instead, a much more powerful unit. You can check these synergies in the units’ screen, under the “Relevance” menu. 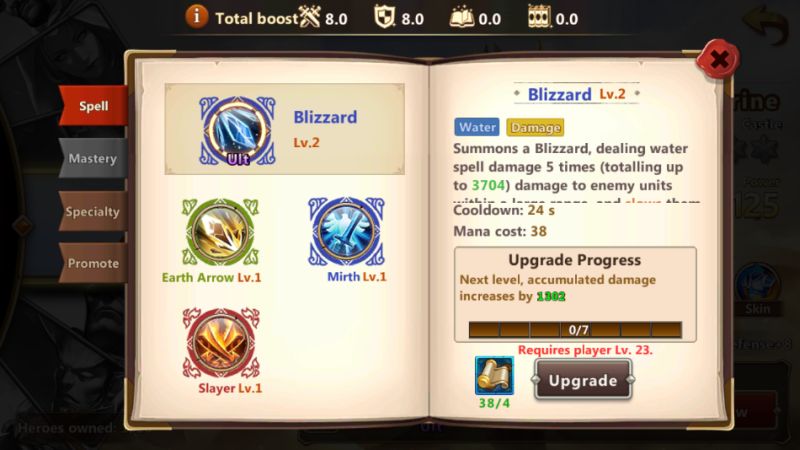 Each hero has access to four spells, and you need to reach player level 20 to start upgrading them. Upgrading spells costs Spell Scrolls, which you can buy in the Exchange House by spending your gems. Spells can be cast during the battle, and have a mana cost. You also need to aim them, so try to maximize their effectiveness, by using offensive spells on your enemies when they group up, and boost or heal your allies whenever you need to.

Heroes can also be promoted. To promote a hero, you will need a certain number of the hero’s fragments. Promoting a hero increases its star-level, and unlocks extra abilities, which you can see in the “Specialty” screen.

There are multiple extra modes in the game, aside from the story content, these mods usually bear specific rewards, and you should try to play in them as much as possible if you are stuck on a story level to gain more resources and units to make your team stronger.

There is an Arena dedicated to PVP matches, where you can challenge other players and climb the ladder. Whenever you fight a battle, regardless of its outcome, you can pick between 3 cards, and get the corresponding reward. 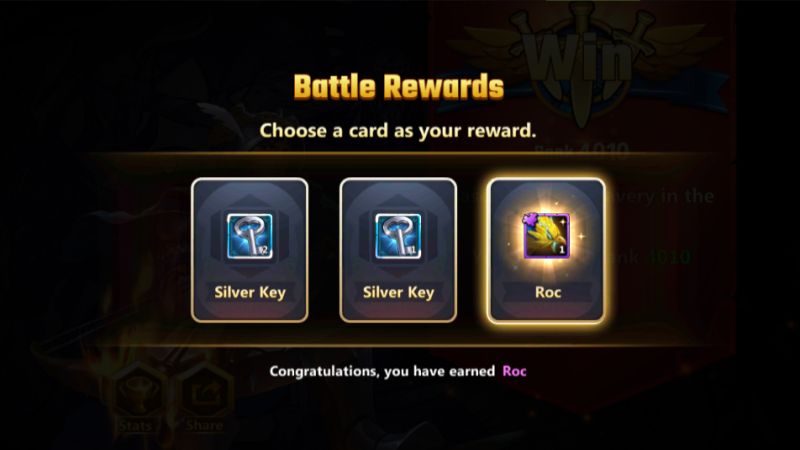 You gain gems if your place on the ladder is higher than your previous peak. You also gain extra rewards based on your current place on the ladder at the end of each day. The most interesting resource you gain through these rewards area the Arena Coins, which you can then spend in the Arena Store, a store whose goods change every day. In here, you can find unit fragments, resources to upgrade your gear, and other miscellaneous resources such as bags of gold and consumables. Go to your town and visit the Colossus to enter the Arena. Arena fights are always played in auto mode. 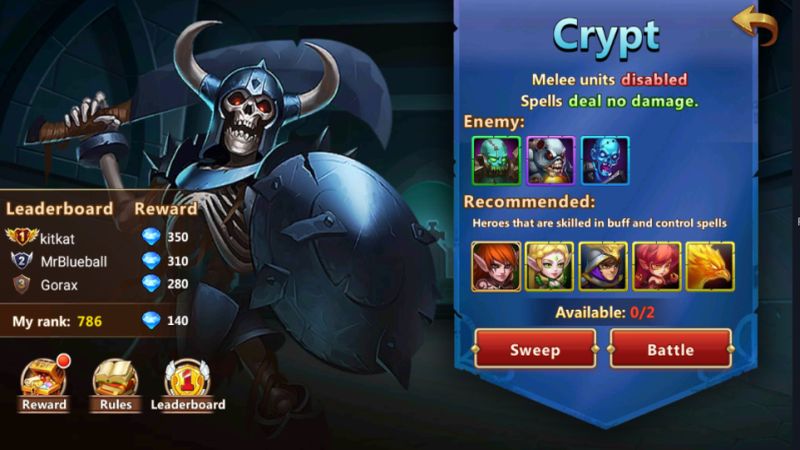 The Crypt is very important because it makes you earn unit experience, which becomes one of the most important resources when you start to getting further into the game, as you will need to make sure your new units can quickly get up to speed with your stronger ones when you reach a certain point. You can enter the Crypt up to two times in a day.

In Dragon Utopia you get some items to help improve your heroes. There are three different dragons you can face: Rust Dragon, Faerie Dragon, and Crystal Dragon, and you different dragons appear in different days of the week, for example the Rust Dragon can only be faced on Monday, Thursday, and Sunday. You can face an available dragon up to two times in a day. The battle consists of a single boss-fight against one of the dragons.

Read up on what each dragon does before engaging it in combat, and make sure to go in prepared. You still get some rewards even if you fail in slaying it, but of course you earn much more rewards by slaying the dragon. You can even select the difficulty of the fight before entering it, higher difficulty fights yield higher rewards. You unlock the higher difficulty levels by increasing your player level.

This wraps up our beginner’s tips and tricks for Might & Magic Heroes: Era of Chaos. There are a lot of different units in the game, and the various game modes will keep you busy for a long time. It is possible to reach the highest level of play without spending money, as the game is very generous when it comes to rewarding its players. Be sure to let us know in the comments if have discovered additional tips or strategies! Until then, happy grinding!