Mario Kart Tour is the newest racing installment in the well-known Mario Bros franchise on iOS and Android. Created by Nintendo, those two iconic Italian brothers are mega popular worldwide. And, now you can join the fun by downloading Mario Kart Tour to your iOS or Android-powered device. This classic racing game will provide you with endless entertainment and plenty of excitement.

At the same time, Mario Kart Tour features challenging gameplay, full of obstacles and praise-worthy rivals. So you will need all the help you can get to win the tours in this game. Thus, going through our comprehensive Mario Kart Tour tips, cheats and strategies is a must. Study the following tips and tricks and apply them in your next race to win maximum points and become the undisputed champion!

In case you are new to the world of Mario Kart racing, you might be surprised by the speed of this game. To clarify, things happen fast when it comes to racing against the likes of Donkey Kong, Yoshi, or Toad. The colorful backdrop makes the gameplay even more chaotic at times, making it difficult to see where you should be going. 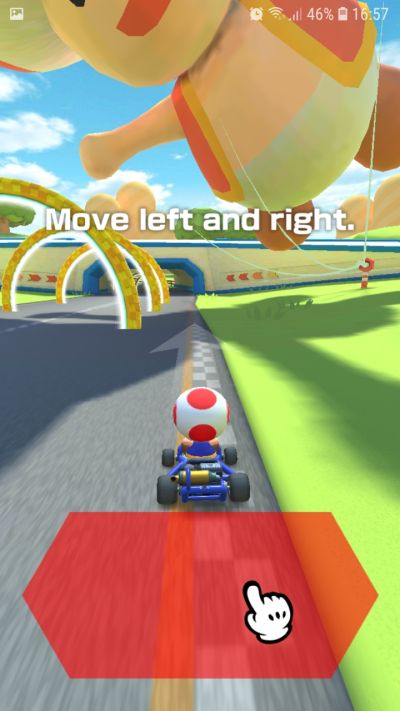 On top of that, the karts in this game are somewhat unpredictable, to put it mildly. Of course, as you progress through the game, better karts will become available. Even so, novice players will have to make a choice early on at the start of their driving career. They will have to choose between the Simple or the Drift method. In other words, these two systems present the driving methods. If you have no experience with the game, it is better to go with the Simple driving method. By choosing this option, you will perform all the steering by sliding your finger to the left or right. At first, drifting and other skills will be hard to pull off. But, with a bit of practice, you will wrap your head around the controls in Mario Kart Tour.

2. Choose Your Driver, Kart, And Other Elements In A Strategic Way

Over the years, Nintendo has expanded the array of characters that can be seen in Mario-related games. As a result, Mario Kart Tour features a plethora of avatars you can choose from. In fact, players will select their driver before every race. Yet, it is imperative that you pay attention when choosing your champion. They all have different qualities and characteristics. On top of that, the characters have certain preferences in terms of tracks and circuit types. What this means is that they could perform better on some racetracks.

Likewise, players will have the chance to select a kart ahead of every race. Needless to say, we recommend that you do not rush through this process. Instead, take your time to see which karts will provide you with the biggest advantage over the opponents. If you assemble the perfect combination, you will be able to collect the maximum amount of points. Of course, it will be easy to win the race if you prepare well and choose the right elements.

3. Always Go For The Rocket Start

We already said that Mario Kart Tour is a classic racing game, which means that the goal of every stage is to be faster than the rivals. To be precise, seven drivers will participate in each race. And, your primary task is to cross the finish line ahead of the others. At the early stages, the races will require you to go two laps around the circuit. Later on, the number of laps may vary. 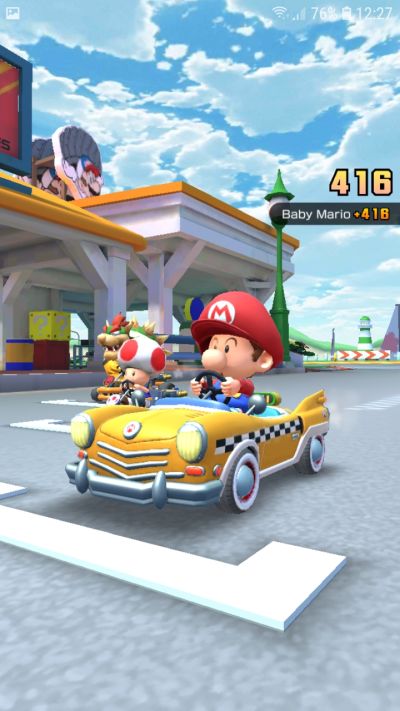 Either way, it is crucial to get a good start to the race. For that reason, players should always attempt to achieve the so-called Rocket Start. To clarify, this type of start will launch your driver forward, allowing him to gain a certain advantage over the other drivers. As the name says, the kart will fly forward like a rocket, leaving the opponents in a cloud of dust. The sequence for triggering this boost starts by holding the screen when the count for the start of the race reaches 2. After that, hold the finger until the counter says Go. At that moment, lift the finger off of the screen and the rocket will be launched. 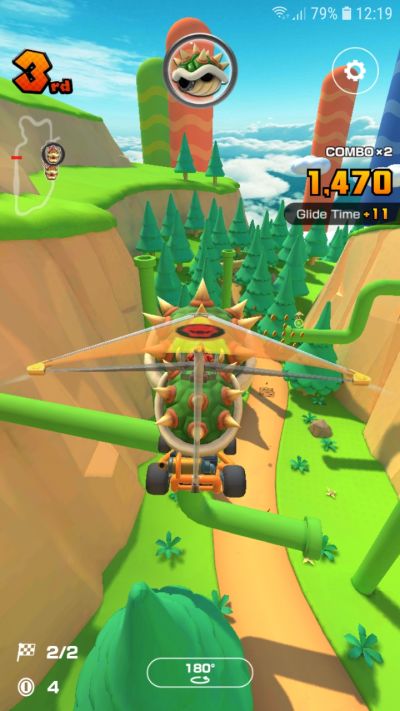 For instance, drifting and gliding through the air will reward you with lots of points. The longer you stay in the air when gliding, the more points will go into the bank. Also, players will earn Performance Points by using the attacking items. We will elaborate more on those items in the upcoming chapters. For now, let’s also say that the champions of a tour earn the most points. So, try to finish every race as the number one, and your points tally will grow as well. As a result, you will earn lots of coins and other important items.

5. Use The Buffs To Attack Or Defend

When playing Mario Kart Tour, players will have an arsenal of items at their disposal. Some of those items, such as mushrooms, have evolved into iconic Nintendo symbols. Besides the famous mushrooms, you will have access to bombs, green shells, bananas, eggs, and so on. Of course, as you progress through the game, more and more items will become available. 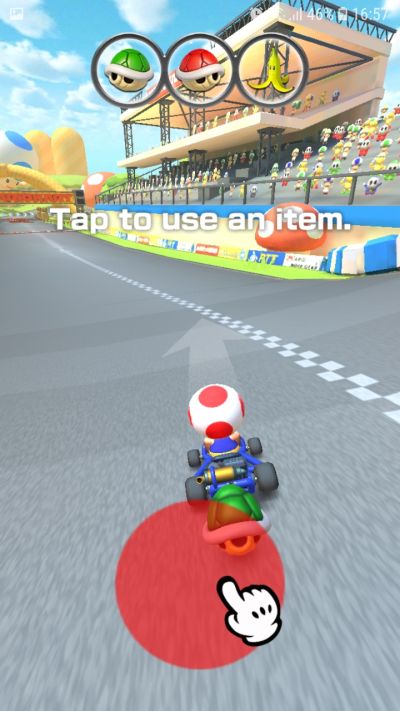 The main purpose of these items is to help you win the race. Since the rivals in Mario Kart Tour will be breathing down your neck at all times, these buffs and power-ups can provide you with a crucial boost. In fact, it is impossible to earn maximum Performance Points if you are not using the buffs. So, always tap the items located at the top of the screen. They will turn up the heat and either attack the opponents or defend you from their attacks. Either way, the items are there to spice things up so make sure to use them at every opportunity. Also, try to use them in a strategic way to maximize the damage you can inflict to the rivals.

In a way, Mario Kart Tour is a sort of never-ending chaos that keeps throwing you around, from one adventure to the other. In all that frenzy, there is a specific mode by such a name. Needless to say, the name Frenzy is pretty self-explanatory. To clarify, the Frenzy will turn your driver into an invincible force, a force that will destroy everything in its path. For that reason, players should always try as much as possible to activate the Frenzy mode. 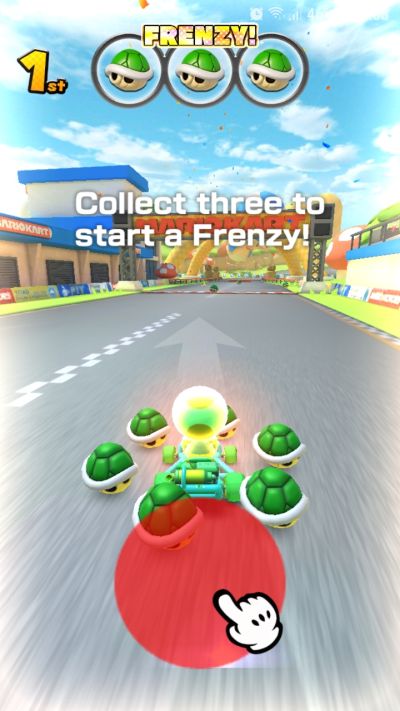 The secret to unlocking and triggering this mode is in collecting three buffs of the same kind. For example, three mushrooms. Once the Frenzy mode starts, the items will spin around the driver, protecting him from the rivals. Also, the speed of the kart will increase. All in all, you will receive a tremendous boost, a boost that should lead you to victory. However, the Frenzy mode comes with a limited duration. So, try to make the most of it while it lasts. Disperse the opponents and get to the front of the pack while the boost is providing you with extra speed.

7. Collect As Many Grand Stars As Possible

Mario Kart Tour is a racing simulation that features several types of currencies, such as gold coins or rubies. But, the most important ones could be the Grand Stars. Yes, even their name triggers notions of grandeur and magnificence. To be honest, the Grand Stars are not all-powerful, but they have a vital purpose in the game. Namely, they will help you unlock new tours and racetracks.

In other words, you will need to collect as many Grand Stars as possible to move on to new stages in the game. In fact, every new level will require a certain fee, which you have to pay in the form of those stars. So, try to collect as many of them as possible. And, the only way for acquiring them is by beating the rivals on the track. Also, Performance Points will play a role in the process. Thus, make sure to boost the points for gliding, drifting, or attacking the other drivers. All of those activities will add to the total at the end of the race, resulting in more Grand Stars.

On top of everything else, Mario Kart Tour seems to be a generous game as well. What we mean by this is that you will be showered with bonus features and rewards as you play this particular release from Nintendo. It goes without saying that players should make the most out of those gifts. By doing so, the gaming experience will become more enjoyable and amusing.

For instance, the so-called Bonus Challenges are a great way to earn extra rewards. The concept of those Challenges is that you have to perform a series of actions within a certain period. If you manage to clear the challenge, you could receive Grand Stars, or even new drivers or karts. Also, every once in a while, you will encounter the Coin Rush feature. As the name suggests, this bonus offer will provide you with a chance to collect lots and lots of gold coins. Likewise, Daily Rewards are something you should not miss out on. In other words, collect the gift for logging into the game on a daily basis.

9. Use Rubies To Fire The Pipe

As we said, Mario Kart Tour is a generous and rewarding mobile game. Also, we mentioned some of the features which can provide you with rewards, such as Bonus Challenges, Coin Rush, and so on. Yet, there is another important element of the game that can bring valuable items your way. The name of this feature is the Pipe, and you may be fooled into thinking that the Pipe is something mundane and worthless. On the contrary, this segment of the game can have immense value if you make the most of it. 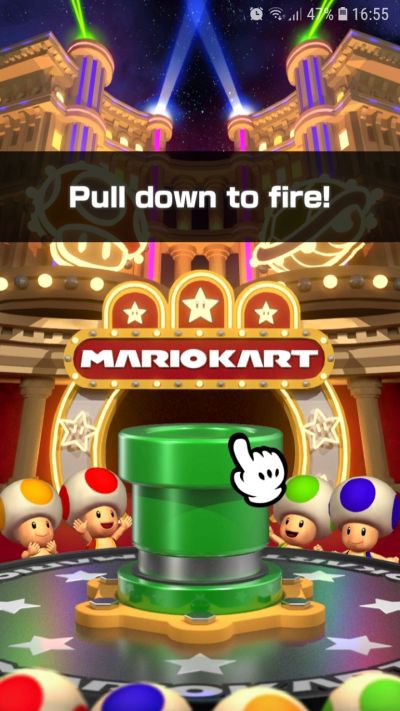 To clarify, the Pipe is a bonus feature that provides random rewards. By pulling the finger down and then releasing it, you will shoot the Pipe. As a result, the beam of light will bring out the gift. Players can collect all sorts of things by using this feature. However, the most important use of the Pipe is for summoning new drivers. In other words, you could summon the legendary Mario if a bit of luck goes your way. Also, it is important to note that every use of the Pipe will cost you five rubies.

10. Visit The Shop Every Once In A While

All of those bonus features that come with the game are refreshing and appealing. Even so, they will not give you everything on a silver platter. Nope, you will have to put some effort into driving and fighting against other brave rivals on the racetrack. In addition, you will have to grind out the coins and stars to unlock new items and tours.

Luckily, Mario Kart Tour also offers the option of buying the items you need. By visiting the shop, you can purchase the items. Of course, not all of them will be unlocked at the start of the game. But the more coins you have in the bankroll – the more items you will be able to buy. The Shop offers three main categories of ‘goods’ – drivers, karts, and gliders. All of them play a role during a race, so make sure to spend the coins wisely. In other words, splash the cash only when you are sure that the item in question will boost your performances on the track.

And, there you have it! This ends our Mario Kart Tour beginner’s guide featuring tips, cheats and strategies that should lead you to the ultimate victory. If you are familiar with any other tips or tricks that could be of use, don’t hesitate to leave a comment below!