Magic Brick Wars is a game developed by Halfbrick Studios, whose name should ring a bell, as they are the folks behind classic mobile games such as Fruit Ninja and Jetpack Joyride. This new game is a real-time strategy multiplayer title in which two kings face each other. Each player places their own barriers and units over the course of the game, trying to make them reach the opposing king and damage them. The game ends when either king’s life drops to zero.

In this Magic Brick Wars beginner’s guide, you are going to learn the basics of the game, and how to make use of the resources you are given to improve your gameplay and win more games. You should already be familiar with the basic game mechanics if you have played Clash Royale in the past, but there are some differences. So without further ado, we present you our Magic Brick Wars beginner’s guide that comes with a bunch of useful tips, cheats and strategies to outsmart your opponent!

1. How The Battles Unfold

Magic Brick Wars is a real-time strategy game, so be prepared to devote your full attention to the battles of the game, if you want to win them. On the top side of the screen you see your opponent’s health, how many trophies will be given to the winner, and how much time is left to complete the fight. If the time runs out before either player’s health has been depleted, then the player with the most health will win the fight.

On the bottom side of the screen you see all the information you need to play the game: your health, what brick you can place, the button to rotate the brick to make sure you place it in the best possible location, your mana bar to know what you can play and how soon you can play your next card, what cards you can currently play with their respective mana cost, and lastly, which card you will get after you play your next card. 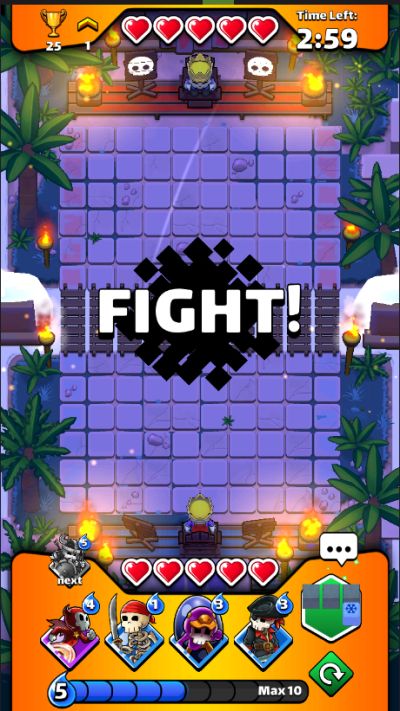 The battle system is relatively simple, but it is also extremely deep. As we have already said, battles happen in real time, and you have to place your barriers and units on the field. They will appear after a second of you placing them, and they will immediately take effect after the second has passed. Barriers can be rotated with the respective button, and all of the barriers have a special brick. We will analyze these bricks more in depth in the next section.

Blocks are free to place, but they take some time to recharge, so you cannot place multiple blocks one after the other, also their shapes are random, and resemble the shapes of Tetris blocks. You can rotate them to make them fit or to make sure you can place the damaging blocks right where you are about to get attacked.

Units have a mana cost, and it depends on their stats, better units will have a higher cost. Not all units are fighters though. You can get for example the Boulder, which simply summons a rolling boulder that does fixed damage to all enemies it hits in a straight line. There are many types of units, so make sure to play them accordingly to what they do best in battle. We will talk more about how to build your deck in the following section.

You should make sure you’re always attacking your opponent, don’t leave them any breathing room. Use your blocks in a smart way to block paths and defend yourself, and dispatch units that will force your enemies to react. The only time to be defensive is when the timer is about to run out and your health is higher than your opponent’s.
Another viable strategy is to play defensive once you have a health advantage over your opponent. Deploy blocks and ranged units behind them and play passively, use cards like the boulder to keep the field clear, and you will win easily a lot of games.

2. Stack Up Your Deck

Your deck represents all the units and bricks you bring to the battlefield. You can bring up to 8 different unit cards, and 3 different brick cards. There are 11 types of special bricks: Fire, Ice, Poison, Stone Wall, Zippy, Zappy, Trap, Confuse, Bomb, Healing, and Skeleton. 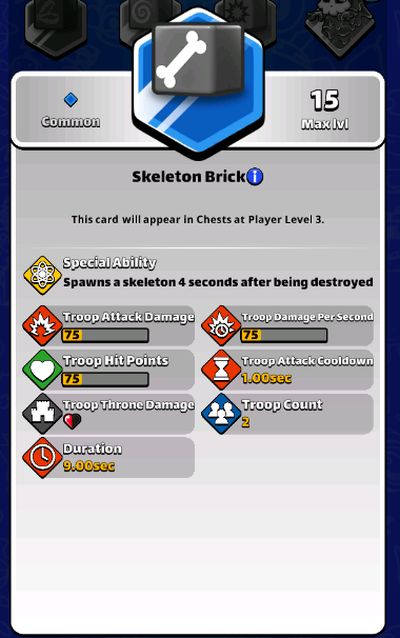 Poison bricks will release a small poisonous cloud that will slow and deal damage to enemies in it, stone wall bricks spawns several reinforced bricks in an area when broken, and are exceptionally good at stalling powerful units. Zippy bricks give your units who pass through them a small speed boost, while zappy bricks will send a lightning chain to any unit that breaks it.

There are 27 unit and spell cards, and they can be divided in various categories, depending on what they do best. For example, the Viking are extremely slow and tanky, and can take a lot of hits before dying, so you should place them to defend your lanes that are under heavy assault, while units like the Devil are extremely fast and nimble, and deal lots of damage, but die very quickly, so are best suited to clear out weakened enemies and then go right into the enemy king.

There are many spell cards, with various effects. Some simply summon an object that deal damage to the enemies it hits, like the Boulder or the Spiked Roller, whereas others like No Cast Area will prevent your opponent from casting spell in the targeted area. You can check out all the cards in the deck screen, even those that you don’t own.

You will have to play the game for a while to get used to what all the various units do, as well as unlocking more cards for your deck. Once you know what type of units you want to run you will be able to quickly build up a deck you like.

Units have a level, in order to increase the level of your cards you will need to find a certain number of duplicates and then spend gold to level them up. You can see how many cards and gold you need to reach the next level in the “Cards” screen.

You can have up to 3 different decks, so experiment with various formations and see which ones you like the most. You can always try a deck out by selecting the “Test Match” option in the deck creation screen.

3. How To Unlock More Cards

You need more cards to build up your deck and to level up your units and blocks, so you will need to find more cards. You can get more cards in different ways: 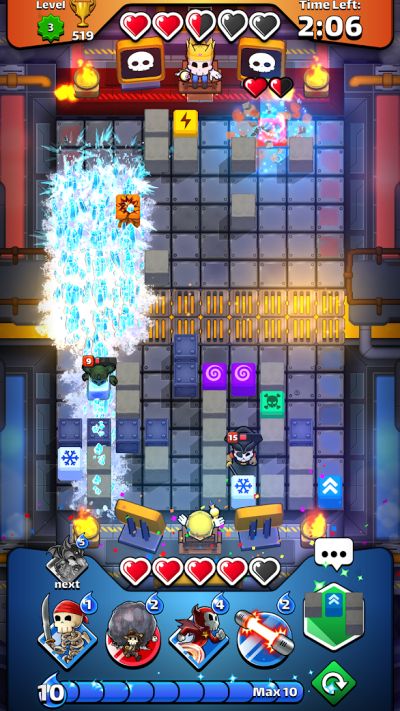 – Win games: when you win a game you get a chest which can be opened either by spending diamonds or by waiting some time. These chests contain gold, diamonds free cards, or other types of rewards. Even if you feel like you are losing every match keep playing, as long as you win your first 3 or 4 games you will be able to build up a decent deck.

– The shop: the shop has a “daily deals” section in which you can buy cards with gold, just make sure to visit the shop every day to see if there are cards you are interested in. The daily deals run for 24 hours, and you can see when they will reset next on the timer right above the cards you can get. You can also purchase chests with diamonds in the shop, and these will also have cards in them, so if you have surplus diamonds and want to power up your deck make sure to check them out. You can also check how many cards are in each chest in the shop screen.

– The mine: you can dig in the mine for extra rewards. You spend stamina to break down the blocks, which could contain rewards, and you gain stamina over time, so check the mine back periodically, use up all of your stamina, and then repeat after some time has passed. There are different types of block in the mine: the blue blocks contain diamonds (the premium currency of the game), the golden blocks contain gold coins, and the rainbow-colored blocks contain cards. Don’t waste stamina hitting the regular grey blocks unless you need to carve a path through the mine, focus on hitting only those that yield rewards in them.

– Friend rewards: you can get rewards by inviting friends via bluetooth, and one of the rewards is a Raskull Chest which contains at least 4 rare cards and 1 epic. This is a one-time only time of reward, so don’t worry too much if you can’t get it.

Attention: you can’t get every card right when you start the game, even if you spend money on it. Most cards are only obtainable once you reach a certain level, this keeps the game balanced between free to play players and those who spend money, since spending money won’t instantly give you the most powerful units, you will still need to play and win games to level up your account in order to unlock the higher-level cards.

4. The Resources In Magic Brick Wars

There are different resources in the game: Gold, Diamonds, Stamina, and Stars.

Gold is the resource you will need the most of, as you can use gold to do almost everything in the game, from upgrading cards, to purchasing the daily deal at the shop, and even increase your max stamina. 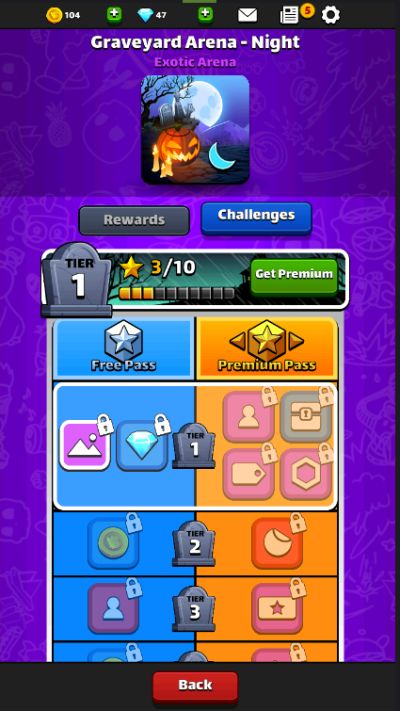 Diamonds are the premium resource of the game, and you can purchase them. Diamonds are mainly used to purchase chests, which contain cards. You can also use diamonds to open the chests you get from winning battles.

Stamina is what lets you progress through the Mine. You use stamina every time you break down a block. You get stamina passively over time, and you can also get it at the end of lost fights.

Stars are a special type of resource tied to the game’s Pass. There are 2 versions of the pass: Free and Premium, and you can purchase the Premium one. The Premium pass yields more rewards than the free pass, but most of these rewards are cosmetic anyway, so you don’t lose much out gameplay-wise by not buying it. You gain stars by completing challenges, you can check what these challenges are from the “Rewards” menu, and then by selecting “Challenges”.

This ends our beginner’s guide for Magic Brick Wars. The gameplay is very deep despite the fact that it looks very simple at a surface level, and it has the potential to stay fresh for a long time. As of now there are only 38 cards in the game, but since it got released recently, it’s understandable. We can’t wait to see what the developers have in store for the game! Let us know in the comments if you have discovered any other tips or tricks for the game! Happy warring!