Kingdom Alive is a new mobile game from Plustonic, and it was published recently by Mobirix. The game features a bunch of characters and exciting gameplay, which means that you will have tons of fun playing this strategy RPG. The storyline of Kingdom Alive follows a group of brave heroes on their voyage through a new world, and they need to overcome hordes of enemies if they want to defeat the evil Heart of Ash.

The likes of Captain Prodd, Tuli, and Aria will bravely stand up against goblins and spirits, but they will need your help as well. That is why our Kingdom Alive tips & tricks guide can be of great assistance to any player willing to help the explorers on their missions through the Forest of Dreams and other similar enchanted places.

1. Pay Attention To The Timer

When playing Kingdom Alive, you will be in charge of a team that consists of nine different categories of soldiers. Once you deploy them, the soldiers will automatically move forward and engage the enemy, and you even have the option of speeding up the action with the commands in the top left corner. For example, there is the option of ‘Auto’ play, and also a command called ‘Continuous battle’. 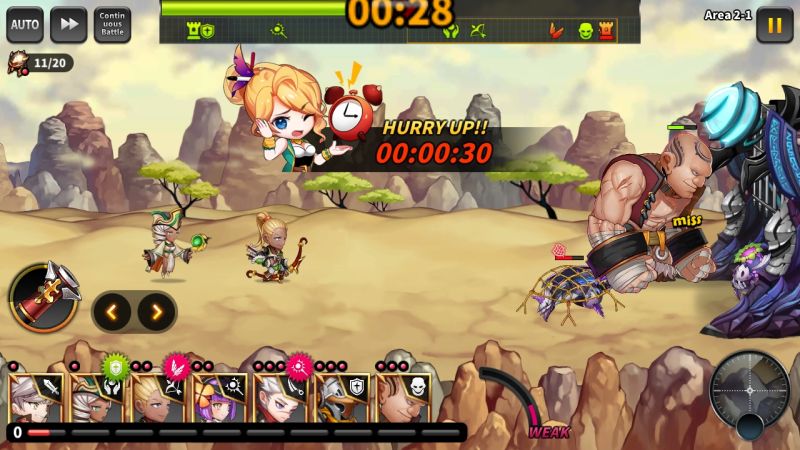 However, we advise the players to always keep an eye on the timer in the upper portion of the screen. The duration of every quest is limited, i.e. you are only given three minutes to obliterate all the enemies and demolish their tower. Unfortunately, this is sometimes easier said than done within the limited timeframe, and that is why the players need to pay attention to the time. If you notice that the time is running out and the enemy is still strong – push harder and deploy all the forces you can come up with.

Of course, the game will also notify you when the time is almost out, and this seems to be a helpful little feature.

Destroying the enemy headquarters is the goal of most quests in Kingdom Alive, but you will not even make it near their defensive structure if you do not attack the opponents the right way. As you progress through the game, the enemies will become stronger and more powerful, and your troops will have a hard time standing their ground against wave after wave of evil monsters. However, if you use the proper tactics, your forces will transform into an elite fighting machine.

If you wonder what we are talking about, allow us to explain. Kingdom Alive provides the players with nine different classes of heroes, and all of them have unique attributes and capabilities. Some are better at fighting against flying enemies, while others only act as healers on the battlefield. The number in the top left corner will tell you how many soldiers you can deploy, and we urge the players to create a balanced and symmetrical team. In other words, a combination of healers, archers, and knights, for example, can give you an advantage over the enemy.

3. Select And Equip Your Team Before Going To War

Kingdom Alive requires a lot of tactical thinking and ingenuity, and even though this can make the game challenging from time to time – these elements also make it so interesting and captivating. For example, the attributes of the enemies which you will encounter on the battleground will largely affect the proportions within your team, and that is why we advise the players to carefully select their units before starting the assault. 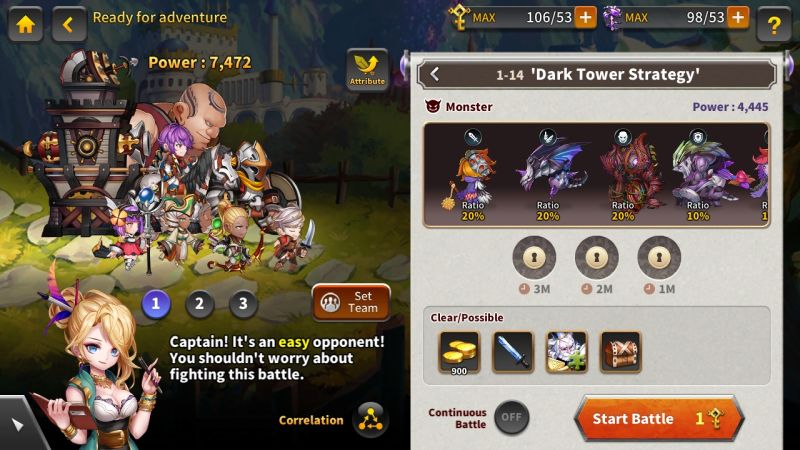 Before every fighting sequence, the players are given a preview of what awaits them, i.e. on the right-hand side, you can see the ratios of the types of enemies you will have to face. Also, their overall power level will be displayed. On the left-hand side, you will see the power of your troops, and there will also be a small ‘Set Team’ icon. By clicking this button, you will have a chance to choose the heroes for your team, and you can also equip them with the necessary equipment.

We also suggest using the ‘AutoMount’ feature when equipping the units with equipment, simply because this option saves time and makes the process as quick as a breeze.

The strength of your team as a group depends on the individual characteristics of your team members. Since Kingdom Alive offers a lot of options when it comes to combinations of units, the players can create high-quality teams if they use the principles of balance and symmetry. However, there are other ways in which you can boost the power of your troops, and we suggest that you explore all of them.

For instance, the players can improve the attributes of their heroes by leveling up their class. Of course, you cannot level up a hero free of charge, and this process requires the use of Evolution Stones. Similarly, the players can upgrade the Skills of each hero, and these actions will also take up some of your resources, predominantly gems, and gold. Also, you can Upgrade the hero by increasing their EXP levels, but this also happens automatically after you successfully complete a quest.

The more experience they have, the stronger the heroes! In the end, this also means that your brigade will be more powerful as well, which will allow you to progress through the missions.

5. Summon Up New Heroes And Equipment

On the bottom of the Welcome screen, i.e. in the lobby of Kingdom Alive, you will see an abundance of options. Some of them are designed to provide the players with an opportunity to increase the power of their soldiers, but one of them offers you the chance of summoning an entirely new character. Additionally, the ‘Summon’ option can be used to obtain new equipment, which can also enhance your chances on the battleground. 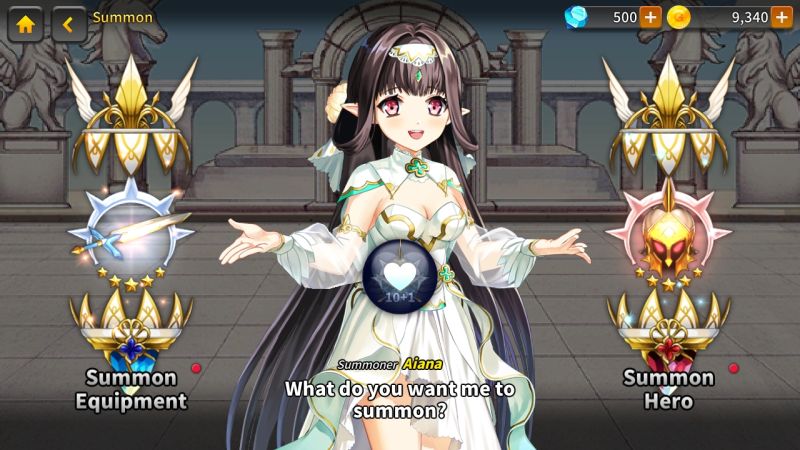 By clicking the ‘Summon’ icon in the bottom, you will be taken into a section which offers two options – summon the equipment, which is on the left, and summon a hero, on the right. We suggest that you visit both of these sections on a daily basis since Kingdom Alive offers one free attempt at summoning per day. In other words, you can generate new useful pieces of equipment or discover a new hero, if you just use the ‘Summon’ feature and exploit its characteristics.

As we all know, archers and knights are not the most efficient units when it comes to taking down the enemy’s citadel. Instead, an artillery barrage can do the job in a hassle-free manner. When it comes to Kingdom Alive, a turret-like tower will be of great use to those players who learn how to use it. This structure can support your troops as they wreak havoc on the battle arena, and that is why we advise the players to update the tower as much as possible. The actual process of updating and leveling up is similar to upgrading your heroes and commanders. 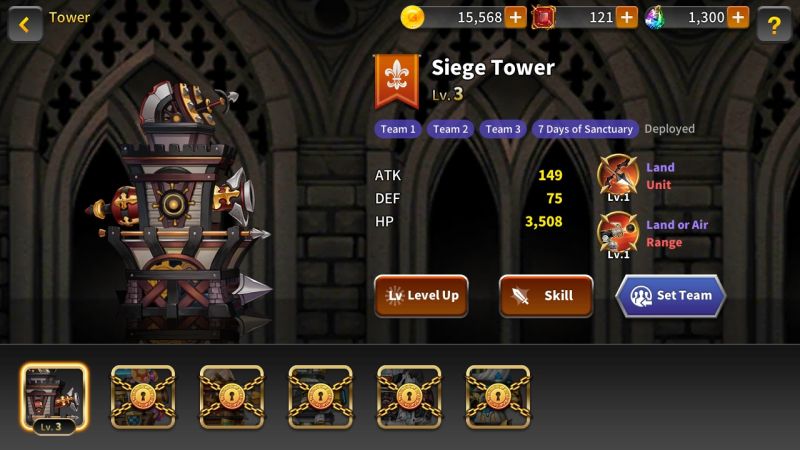 However, enhancing your tower is one thing, but knowing when to use it is a whole new game. What we mean by this is that you need to time your attacks to perfection if you want to cause severe damage to the opponents. In the right-hand side of the screen the players will notice the crosshairs, and once the evil goblin is within reach – the tower can be activated and it will send a powerful blast onto the enemy.

Another small tip that we can give is to wait for the stronger monsters to enter the crosshair. That way you can make it easier for your troops on the ground to take down even the most demanding of opponents.

7. Use Alchemy To Your Advantage

Kingdom Alive is all about spirits, demons, and good or evil magic. Once your troops depart from Brando Village, they will constantly encounter zoomorphic creatures, and those opponents will become tougher and tougher as the game progresses. That is why we suggest that players examine all possibilities of boosting the power of their team, and one such way is the use of Alchemy. The so-called white magic can be highly beneficial, so why not use it to our advantage? 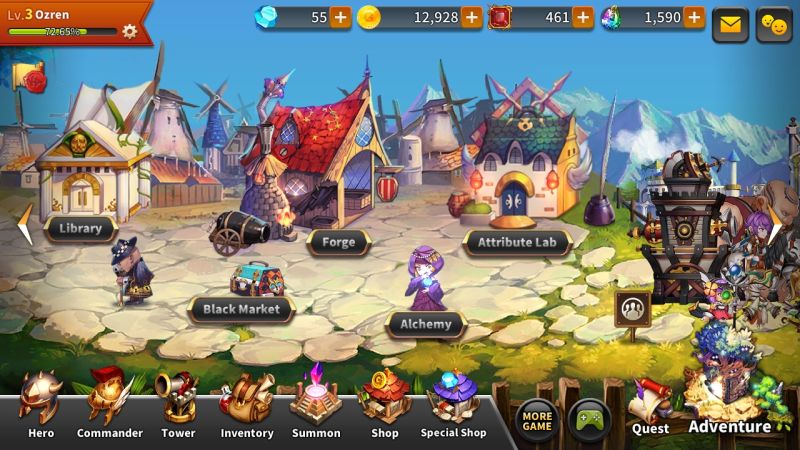 If you swipe left while being in the lobby of Kingdom Alive, you will notice several ‘shops’. One of them is the home of the attractive-looking alchemist, and she will offer her magical services in exchange for some gold or gems, depending on what you need. By visiting the Alchemy and buying the right stuff, you can receive Evolution Stones, which play a big part in upgrading your heroes’ level and power. You can also obtain precious keys or Attribute points, and all of these items can be of use during the gameplay.

That swipe towards the left-hand side, which we already mentioned, can also take you to the Forge, and this ‘shop’ is an important element of Kingdom Alive. The reason for this lies in the fact that your wizards, titans, or assassins can significantly improve their stats if they are equipped with the right helmets, armor, or swords. The proper tools can give them the edge over the enemy, no pun intended, and this can result in a couple of wins for your team. 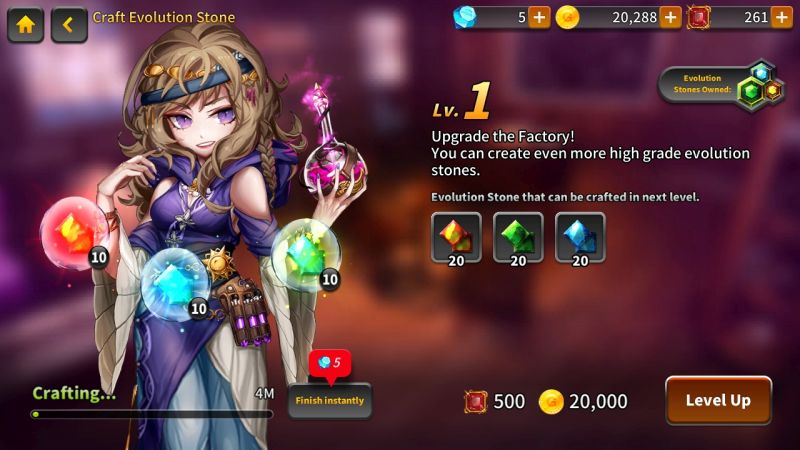 As the name clearly suggests, the Forge allows you to craft your own equipment. However, this shop also offers several other options, such as the ability to merge unused tools, or to improve the ones from your inventory. All in all, this section is certainly worth exploring, and we urge the players to visit the Forge every once and a while. For instance, all those items from your inventory, such as pendants, amulets, rings, or magic robes can find their use in the Forge, and you can make better equipment if you invest a minute or two of your time.

9. Trade In The Shop Frequently

In order to perform all those activities which we mentioned in a couple of previous tips on our list, you will need in-game currencies. Unfortunately, not many things in Kingdom Alive come for free, and that is why the Shop is the best place to go when you are lacking gems or gold. Besides those two, the game features several other currencies, such as several categories of keys, and also the already-mentioned Evolution Stones.

The players can access the Shop by clicking on the icon at the bottom of the Welcome screen, and this section of the game can act as a converter for your funds. In other words, you can convert different units, and re-distribute your wealth so that you can invest it easily in upgrades or crafting of useful equipment. For example, if a certain item requires gems, and you have an abundance of gold, then you can switch those two and then invest the precious stones to obtain the item in question.

10. Pay Attention To The Quests Section

A small red notification sign in the bottom right corner is the one you should never ignore, and a visit to the Quests section can result in lavish rewards and gifts. As you play the game and discover new elements, you will inevitably unlock new features and accomplish certain milestones. Once you manage to do that, the game will reward you with a present, which usually includes a certain amount of gold, gems, and experience points. 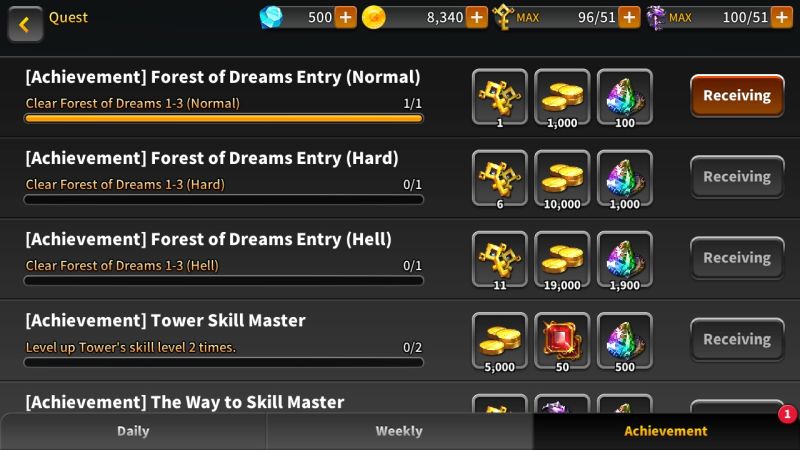 Additionally, Kingdom Alive will sometimes award you with precious tools or skills that would take a long time to unlock following the ‘traditional’ way. As a matter of fact, after every stage of the Campaign, you will receive a reward, and that is why it is important to pay attention to the Quests section and go there often to receive the gifts.

With this final advice, we conclude our 10-point list of Kingdom Alive tips, cheats and strategies. In case you managed to discover any other successful strategies and tactics, do not hesitate to leave us a message in the comment section! 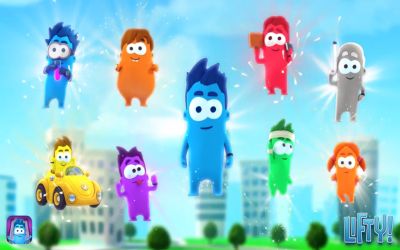 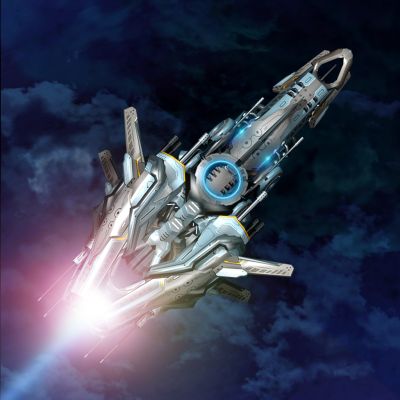