Evolution Games GmbH, the makers of the very popular Unicorn Evolution and Princess Nom Nom Evolution, is at it again with another very addictive, but challenging, game. Idle Royale Tycoon is an idle clicker and strategy game where you combine 2 weapons to create a higher level weapon. The idea is to get higher and higher in the weapon levels by not only combining weapons to collect all 260 weapons, but also to get the bonuses involved. Said bonuses are intended to allow the player to collect all 260 weapons faster. The fun part is that the bonuses are spread around throughout the game so it’s not a “cheap giveaway” but rather a challenge to gain everything. At the same time, Idle Royale Tycoon can be very hard to want to exit! And yes, you can play this while offline. You just won’t be able to get to the ads for certain bonuses.

With such a setup, Idle Royale Tycoon has this tendency to cause questions. These include what to upgrade first, when should you reset, when should you watch ads, and how do you time things to maximize your gains? As it turns out, there is an order to upgrading things and a time to do certain things to maximize your gains. Unfortunately, a large number of players either were or still are randomly clicking and merging! That’s the “Brand X way”. That’s the way you don’t want! The good news is that our Idle Royale Tycoon strategy guide, complete with tips, tricks and cheats, will show you how to maximize your gains.

1. The Main Screen Mechanics For Your Gains

When you first start out, you’ll be seeing the screen as showing below. You’ll only have level 1 weapons being generated once every 10 seconds. But eventually, you’ll end up merging 2 weapons to gain higher and higher level weapons. But eventually, your progression will slow. 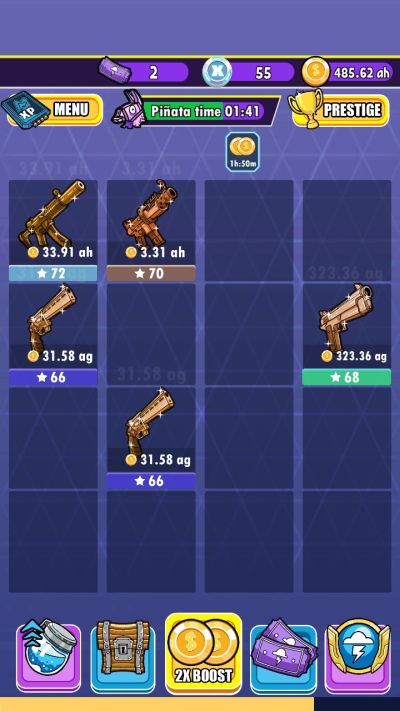 Across the top of the screen are you resources. These include tickets, X Coins, and your currently gained coins. Just below it is the Menu where you can adjust some settings. Next to the Menu are the Piñata Time and Prestige setups. Just below that are the active bonuses. Then the main playing area is in the middle of the screen. At the bottom are the Upgrades, Collection, Coins Boost, Ticket Gaining, and Ticket Spending sections.

The idea is to be able to gain faster and faster each time you reset your current status in the Prestige section. To be able to reset your current status, you have to gain enough gun parts. This is done by merging weapons to gain higher level weapons. Each higher level weapon generates more coins too. Each merge can also produce X Coins. This all depends on the upgrades you did. This also depends on your not overshooting your current highest level of weapon currently on the playing field with certain upgrades. But you also don’t want to reset too soon. In the case of Idle Royale Tycoon, it’s quality over quantity. This means you should get as high of a weapon level before you reset. A good starting point to consider resetting is level 80 or higher.

You can organize the playing field any way you like. In this case, the playing field was organized to keep the highest level weapon in the upper left corner. From there it was simply a matter of letting the playing field fill up. Once it fills up, you can merge weapons over and over in rapid succession. This helps increase the highest weapon level a bit quicker. But even with this, it can still seem slow. But the first important part for filling up the playing field quickly is the Piñata section. Once that timer reaches 0, a piñata will appear on the screen for you to tap on. From there, tap the “Watch Ad” button to double your rewards. Once the ad is completed, the playing field will fill up very quickly. This bonus does not last very long so you have to use your better judgment while the screen is filling up.

Idle Royale Tycoon comes complete with 2 tabs of upgrading options in 1 section. However, your results may not be so great if you upgraded things in the wrong order. 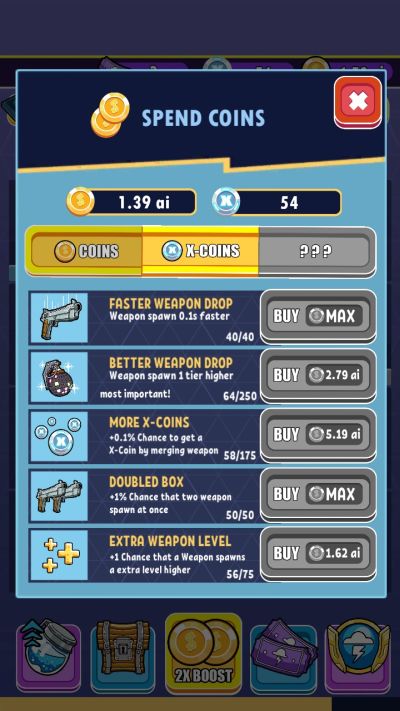 Don’t mind the highlighting in the above screen shot. It’s a little “off” but that’s ok since Idle Royale Tycoon is fun! That’s the Coin Shop! The following is a very effective upgrading priority order. The first part is the Faster Weapon Drop upgrade. That’s the one you want to upgrade to the maximum level first. This will reduce the amount of time a weapon takes to generate onto the playing field. Coins will generate from each weapon on the playing field every 3 seconds as a standard. Weapons will be generated onto the playing field every 10 seconds as a standard. With this upgrade, weapons will be generated every 6 seconds when it’s maximized. At this rate, you’ll gain all the coins from weapons on the playing field twice before another weapon drops.

Second in line for upgrade priority in Idle Royale Tycoon is the Better Weapon Drop upgrade. This will increase the lowest weapon level being generated. So, if you have a playing field full of level 5 weapons and this upgrade is at level 5, 1 upgrade of this option will instantly turn all weapons on the playing field to level 6. No further weapons will be generated below level 6. Another example is if you have 1 level 50 weapon as the highest on the playing field and this upgrade is at level 47. You can add to this upgrade 3 times and all level 47 weapons will turn instantly to level 50 weapons. But there is a catch. Do not upgrade this option beyond the highest level weapon currently on the playing field. You’ll lose gun parts for the Prestige section if you do.

Next for upgrade priority in Idle Royale Tycoon is the More X Coins upgrade. These are needed for the X Coins section which is another set of upgrades. This upgrade increases the chance for you to gain an X Coin when you merge weapons. While we’re on the topic, here’s the X Coins shop showing in the screen shot below. You can already see the upgrading priority in the screen shot! 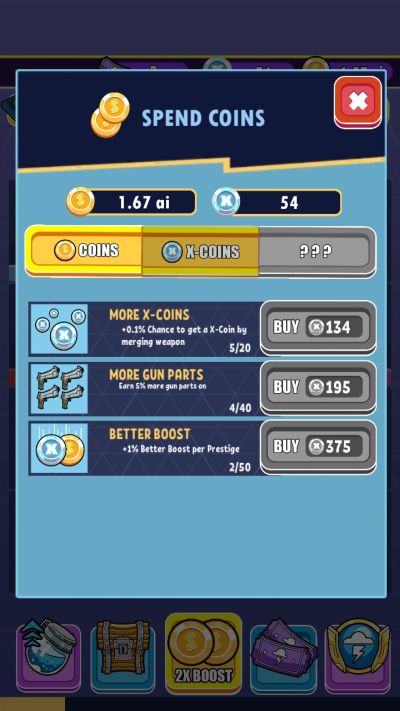 3. The Bonuses Of The Prestige Section

The Prestige section is where you’ll gain bonuses by resetting your game back to the start. But each time you reset, you’ll be able to gain things faster and faster. That’s the idea! 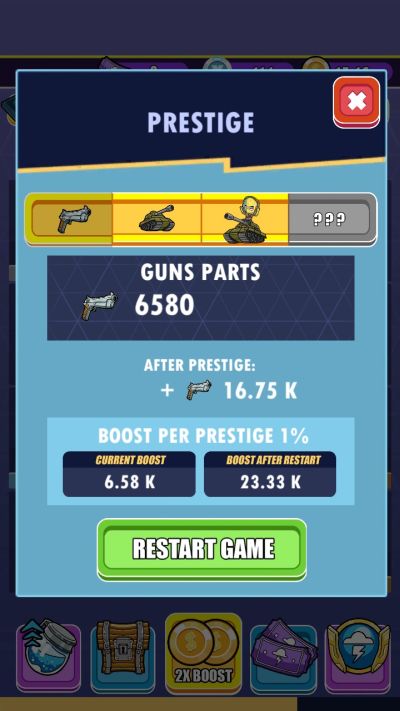 Once you have enough gun parts, you can build a tank. The tanks provide boosts to your gains. The more tanks you build, the more gains you end up with. The downside is that you’ll need more and more gun parts to build a tank each time. The upside is that each reset you do will allow you to build up higher weapon levels faster. Again, the higher the weapon level, the more gun parts you’ll gain. The higher your upgrade options are in the proper order, the easier it will be to merge for higher level weapons faster.

4. Proper Use Of The Bonuses

Believe it or not, Idle Royale Tycoon setup the bonuses to be just as their names imply. However, if you don’t use them properly, you won’t be able to maximize your gains. This will slow down your progress.

The easiest bonus to take advantage of is the Piñata. It’s set on a countdown timer after which you can watch an ad to double your bonuses. Said bonuses are 20 X Coins in total and a 20 second speed up which fills the playing field faster. In checking the very first screen shot above, you’ll see the 2X coins booster sitting in the bottom middle of the screen. Do yourself a favor and watch the ads! Many gamers agree that watching ads is not exactly the high point of fun but it does come in handy in Idle Royale Tycoon! It’s not a stacking type of bonus but it does double your coin gains for up to 24 hours. More coins gained amounts to more upgrade options. So take advantage of this because it also helps the developers create more content for Idle Royale Tycoon. 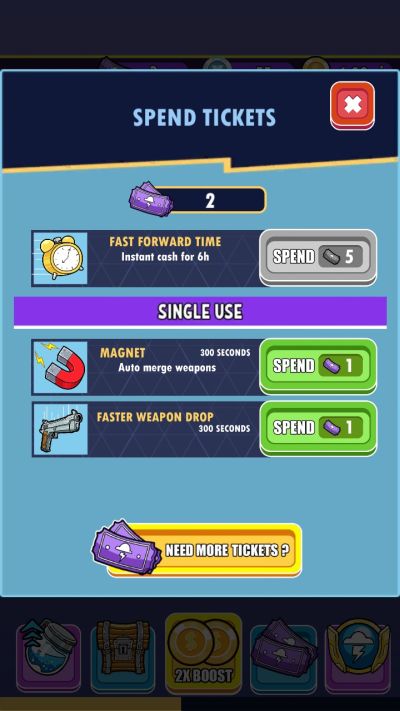 Tickets are the next bonus offered up by Idle Royale Tycoon. You can gain 5 tickets for free every 12 hours. Once again, the ads come in to help you. Most think that the ads are just a waste of time. However, there is always the chance you’ll spot something for an app or game you might like to try out. So give the ads a chance. In this case, you’ll gain extra tickets for every ad you watch in this section up to 5. So right at the start of your Idle Royale Tycoon gaming day, you could end up with 10 tickets to use depending on your timing. Unfortunately, there is a small catch. The tickets are only useful on the Fast Forward Time and Faster Weapon Drop bonuses. The Magnet bonus seems nice at first. Unfortunately, you’ll see you won’t get the chance to fill the playing field nearly as much as you’d like. Save your tickets for the other 2 bonuses.

The Fast Forward Time bonus of Idle Royale Tycoon does just that. It gives you the amount of coins equal to 6 hours of playing. This is according to what’s currently on your playing field. For example, if you have a playing field full of level 5 weapons, the bonus coins gain won’t be so wonderful. But if you have a playing field full of level 100 or higher weapons, that’ll be a hefty coin bonus in an instant! This comes in very handy when your gaming seems to be slowing and you’re not merging for higher level weapons as fast. You just needed a coins boost to use on the Better Weapon Drop upgrade!

The Faster Weapon Drop bonus in Idle Royale Tycoon provides 5 minutes of weapons spawning quickly onto the playing field. It’s exactly like the Piñata bonus but it lasts longer and shows up as long as you have tickets to spend. The real trick behind this is to use it to gain more X Coins. Every merge, even if it’s not to upgrade your currently highest weapon on the playing field, has a chance to earn you X Coins. Since the weapons will be spawning faster, you’ll have a lot more chances! The other trick is to not use the Faster Weapon Drop bonus at the same time you use the Piñata bonus. Yes, they do stack. However, you’d want the bonuses used separately so you’d have more chances at them.

The last bonus sits in the title of Idle Royale Tycoon. It is an idle clicker type of game. This means that even while you’re not playing, you’ll still gain coins. The longer you’re not playing, the more coins you’ll gain. However, this is dependent on what weapons you have on the playing field. So your best bet is to fill your playing field with as many of your highest level weapons as you can before exiting. The other trick to this is when you come back to the game. Once you come back to the game, and if you’re online at the time, you’ll have a chance to watch an ad to triple your coin gains from being out of game. Again, most won’t think highly of ads but when it comes to tripling your coin gains, it starts to become worth the time!

And this wraps up our Idle Royale Tycoon guide! We hope you’ve enjoyed this one, and if you know additional tips, tricks or strategies for the game, please share them with us below in the comment section!