Created by Freeplay Inc., Idle Civilization is a fantastic simulation game, which will provide you with hours of entertainment. As the title of the game suggests, Idle Civilization is all about expanding and developing an archaic society. From Cro-Magnons to Egyptians, you will encounter all sorts of ancient cultures while playing this game.

However, not all missions will be smooth sailing. On the contrary, you will need all the help you can get to overcome the obstacles and modernize the societies. Fear not, as our extensive list of the best Idle Civilization tips, cheats and strategies should be of great use. So, let’s delve into our Idle Civilization beginner’s guide and learn the steps you need to take to create awe-inspiring societies.

1. Tap On The Road To Make The People Move Faster

While playing Idle Civilization, your main goal will be to upgrade the society in question. To do so, you will need to deliver massive amounts of pearls to the Leader’s Cave. To clarify, prehistoric civilizations in this game follow a certain leader. And, the villagers bring offerings to the leader’s home. 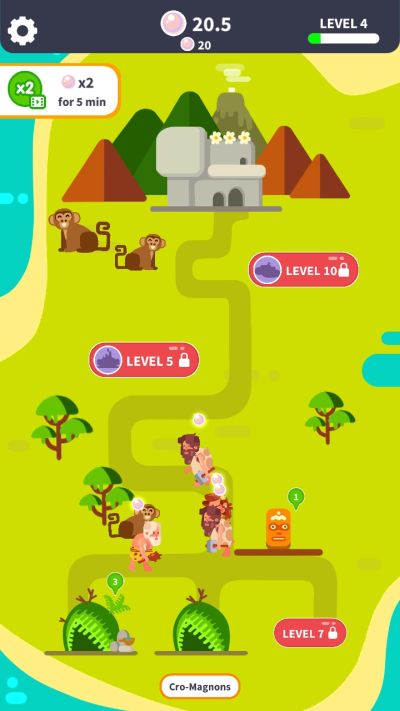 Yet, this process will be very slow in the early stages of the game. In other words, people will take a long time to walk from their primitive huts all the way to the top of the hill. So, to make things a bit faster, players can tap anywhere on the winding road. By doing so, they will accelerate the movements of the villagers. As a result, pearls will start pouring in and your bankroll will grow at a faster rate. Likewise, players can tap on the animals that can be found lying by the side of the road. Monkeys, lions, and other species can also boost the points tally. In short, tap on anything you can get your hands on!

As we said, the members of your society will live in small huts. At the very start of the game, you will have only one hut at your disposal. In other words, only one family will carry the pearls up the hill toward the Leader’s Cave. Needless to say, this is not the most efficient way to expand and upgrade an entire civilization.

So, we recommend that you unlock more huts as soon as possible. In total, players can have up to three huts at their disposal. Every hut has three members – one man, one woman, and a senior citizen. In addition, players can increase the cost-per-pearl rate for each member by upgrading their level. The more advanced the hut, the more you can upgrade the profitability of each of the members of the household. The bottom line is that you should unlock new huts and splash the cash to raise their rank. Three small axes will tell which rank your hut currently holds.

3. Level Up At Every Opportunity

In total, Idle Civilization offers 7 different civilizations. We already mentioned some of them, and the goal of the game is to unlock all of those societies. To do so, you will have to level up, which means that you need to collect as many XP points as possible. For instance, the Egyptians will become available after reaching level 12, and the next society comes at level 25, and so on.

Players can collect XP points in several ways. The most obvious one is by delivering the pearls to the Leader’s Cave. By automation, the villagers will walk up the hillside and bring the shiny pearls. On top of that, you can earn XP by tapping on the animals. Either way, the goal is to fill up the meter in the upper right corner of the screen. Once this gauge is full, it will change into a green sign, telling you that it’s time to step up to the next level.

As you could notice by now, the Leader’s Cave is the central point of the village. After all, the chiefs and village leaders were highly important in archaic societies. So, it comes as no surprise to see a large, well-decorated mansion at the top of the hill. Even the walls of this place are decorated with flowers! 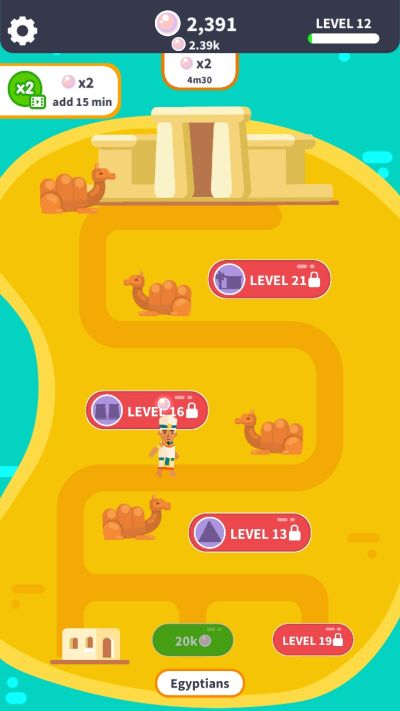 Also, we already said that villagers will bring offerings to this place. Well, the extravagant Leader’s Cave can help you boost the speed of delivery. To clarify, you can increase the walking speed of the villagers by upgrading the Cave. So, you first need to click on the big house at the top of the screen. After that, the menu will provide you with two options – either invest the pearls or upgrade the Cave by watching a video. Players are free to choose whichever method suits their style. The most important thing is to increase the delivery speed and to have more pearls at the Cave.

5. Unlock And Upgrade The Holy Places

History books can tell us a lot about the importance of religious practices for ancient cultures. Prehistoric societies believed in evil spirits, so they used totems and other items to scare off the malicious forces. Idle Civilization will also let you use some of those elements, in an effort to raise the energy and morale of the people.

For instance, the first ‘element’ you will unlock is the Sanctuary. As the name implies, this place protects the villagers from evil gods and spirits. In practical terms, the Sanctuary will boost the bonus for delivering the pearls to the Leader’s Cave. Likewise, players can unlock the Fireplace and the Garden during the first stage of the game. Each of these holy places has the role of a power-up or. Meaning, these buffs will increase the bonus that the players receive. In the end, your points tally will grow as a result of your investment in developing and upgrading the holy places.

6. Don’t Let The Magic Bird Get Away

When playing Idle Civilization, you will have a chance to boost your points tally through several methods. It goes without saying that manual labor will be the primary source of pearls. At the same time, bonus features can also be a valuable asset. 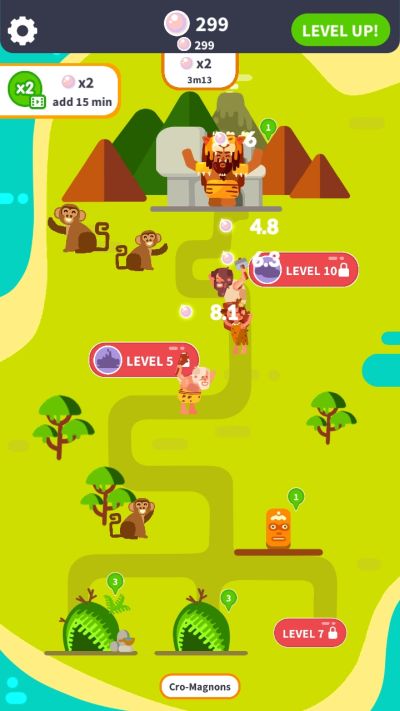 For example, one of the most rewarding bonuses is the so-called Magic Bird. The bird will fly across the screen every once in a while. When that happens, you need to react fast and tap the bird a couple of times. If you are fast enough, the colorful parrot will drop off precious gifts. As a matter of fact, the Magic Bird bonus will last for 5 seconds. During that period, pearls will rain down from the sky. Therefore, it is easy to see why you should never miss the chance to catch the Magic Bird.

7. Call Out The Ruler

Aside from the Magic Bird, some other bonus features will be at your disposal as well. For instance, a dark cloud will often fly over the village. The principle with the cloud is the same as with the bird – catch it before it flies out of reach! So, tap on the cloud several times to activate the bonus.

Likewise, the game offers a generous bonus nicknamed “Call out the Ruler”. In the upper right corner, you will notice a giant lion’s head. All you need to do is to tap on this icon and a lucrative reward will go your way. However, the Ruler does not stick around for long. In other words, this bonus has a limited duration, and you should accept the offer before it expires. Since this bonus is not tied to any terms & conditions, it is easy to see why players should always accept the free money.

8. Claim And Double The Offline Bonus

As we said at the beginning of this list, you will need all the help you can get while playing Idle Civilization. To be precise, you will need to make the most out of the available pearl-collection methods. Yet, sometimes we all have to take a break from the game and leave our village unattended. 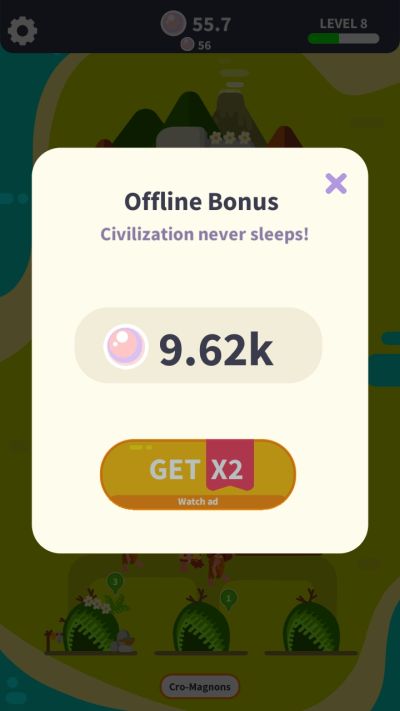 Well, the people in your society will not sleep even when you do. What this means is that the pearls will be dropped off at the Leader’s Cave even while you are offline. Once you come back to the game, a sizable amount will be ready for you to claim it. On top of that, players can double the size of the offline bonus. By watching an ad, you can collect twice as many pearls. So, use this opportunity and invest 15-20 seconds into watching promotional videos. More often than not, huge sums of the offline money will allow you to skip a couple of levels in a flash.

With the final tip, we wrap up our Idle Civilization beginner’s guide. If you are familiar with any other useful tips or tricks for the game, feel free to let us know in the comments!