MOBA games have a huge following all across the globe. And WolfFun’s new mobile game Heroes Strike aims at becoming one of the greats. In an attempt to follow the likes of DOTA and similar legendary titles, the guys at WolfFun created an exciting and action-packed mobile game. By the way, WolfFun also stands behind the well-known Tank Raid Online.

As soon as you download Heroes Strike to your Android or iOS device, you will see the beauty of this mobile game. Above all else, this game offers an abundance of PvP action. Your 3-men team will face loads of enemies, and you will need all the help you can get to become the king of the arena. With that said, our in-depth Heroes Strike beginner’s guide is packed with a bunch of tips, cheats and strategies to crush your enemies in the game. So, let’s see what it takes to wipe out all those enemies!

1. Stick Together At All Times

Every showdown in Heroes Strike takes place in a relatively small arena. The interior design of the battlefield will change as you go through the game. Yet, the basic shape remains the same. Also, most of the walls and barriers inside the arena are powerless against bombs and rockets. Meaning, you can get to your enemies in a direct line. At the same time, this also means that they can get to you in a flash.

To stay alive, the best course of action is to stick close to your teammates. Since the action in this game takes place in 3v3 mode, you and two other guys will fight side by side. At times, the strength of your team members may not be on a high level. On the other hand, sometimes you will have mighty sidekicks on your side. Either way, it is important to keep a tight formation at all times. By doing so, the three of you can send a barrage at the enemy and bombard them with missiles simultaneously. The radar in the upper left corner can help you find the teammates if you ever get lost!

2. Replenish Your Health During Battle 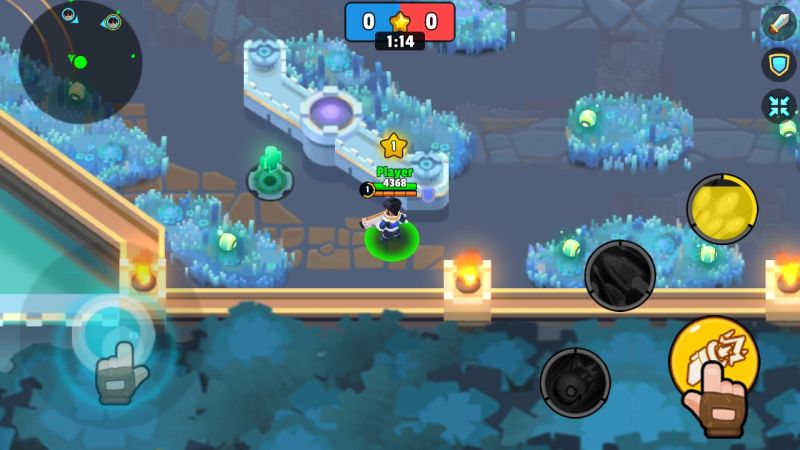 While playing Heroes Strike, you will find yourself in the middle of a chaotic bloodbath. Bombs will land right and left; enemies will come at you from all sides. Also, your teammates will move in random patterns, so you could end up alone and cut off from the rest of the group. In those moments, the bad guys could take a big chunk out of your health by unleashing their strongest weapons.

If such a situation happens, the best course of action is to – run! Even though this action does not seem very heroic, a tactical retreat is the best strategy in certain moments. On top of that, players should run towards the green cross that can be found in the four corners of the arena. As you can guess, the cross will replenish your health, providing you with stamina and energy to jump right back into the action. So, try to reach the health booster whenever you find yourself in danger.

3. Move Around And Collect As Many Stars As Possible

It goes without saying that constant movement can also be a great strategy when playing Heroes Strike. Even though some heroes do not offer spectacular levels of mobility, you should always move around the arena. By doing so, you will find cover and escape dangerous situations. Or, you could outflank the enemy and attack them from the back.

Moreover, constant movement can also bring a lot of valuable points. To clarify, the stars and the orbs will be scattered all over the battlefield. In addition, every kill you make will generate new stars. The reason for collecting these objects lies in the fact that these items can boost your points tally at the end of the stage. In other words, we recommend that you collect as many stars and orbs as possible. As a result, the so-called Battle Box will reward you with more valuable stuff than ever before!

4. Keep An Eye On The Scoreboard At All Times 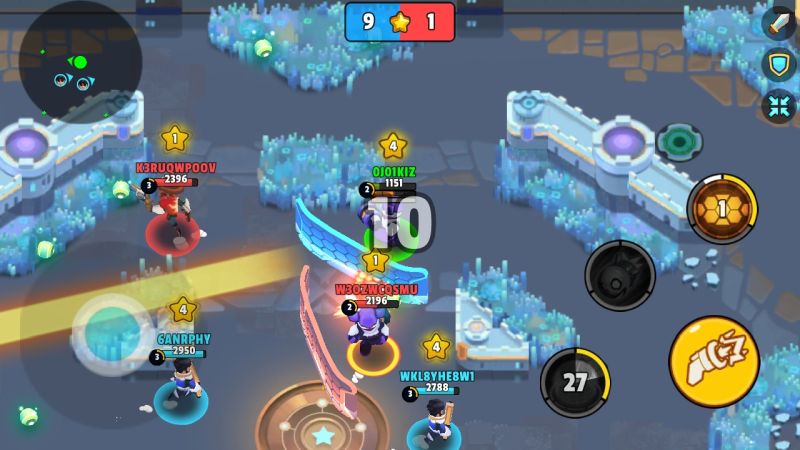 3v3 battles can provide you with electrifying and invigorating experience. Moreover, you can play with Heroes Strike with or against real-life players, which can further boost the excitement. Nonetheless, one thing remains the same, no matter which playing mode you choose – everybody wants to win! Yes, you probably wouldn’t read these tips if you are not a competitive player.

So, the little scoreboard at the top of the screen will keep you posted on the most important aspect of the game. As with all MOBA games, the number of kills is vital for success. In addition, some other actions can influence the results. However, the golden rule for playing Heroes Strike would be – make as many kills as you can. By going on a killing spree, the points will skyrocket, and the enemy will never be able to beat you. Needless to say, double kills are highly rewarding as well!

5. Finish Every Battle In Style

Since the number of kills determines the outcome of the battle, players need to be proactive. The so-called ‘seek and destroy’ strategy is the best way to go. Of course, we already mentioned that some situations will require evasive maneuvers as well. So, try to balance attacking behavior with strategic movement. By doing so, the enemy will stand no chance against you and your sidekicks.

However, sometimes the opponents will launch a mighty campaign against your team. If you see that you’ve lost the lead, start preparing a counterattack as soon as possible. The reason why we say this is the fact that every battle in the game has a limited duration. Once the timer reaches the final 15 seconds, the countdown will begin. In a way, this should inspire you to maximize the efforts and collect as many kills as possible before the time runs out.

6. Level Up Your Heroes 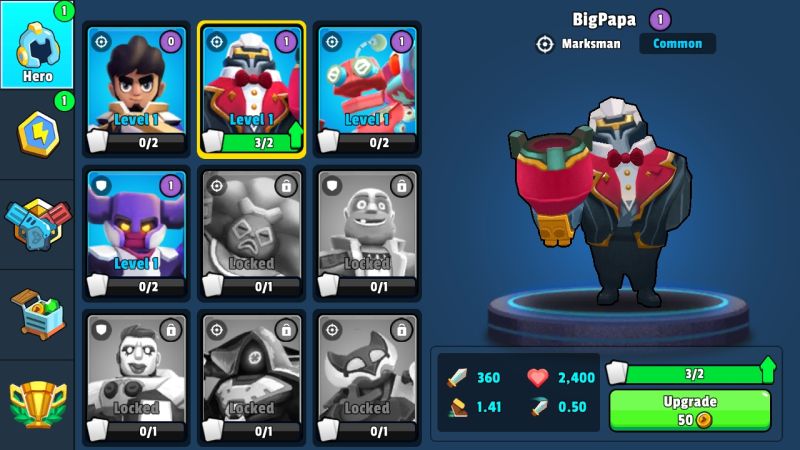 Heroes Strike is a mobile game that can offer a great mix of strategy and action. Likewise, this MOBA also provides a wide array of heroes. From marksmen to tanks, the heroes come with different features and strengths. For that reason, we recommend that you always take a quick peek at the stats on the right-hand side of the character screen. Among others, important characteristics are speed, damage, and health.

At the early stages of the game, you will have access to the likes of Raiden, Destroid, or Veinka. As you progress through the levels, new heroes will be unlocked. Of course, the new guys will come with superior powers. Also, it is crucial that you level up their abilities at every opportunity. To do so, head over to the character screen on the left-hand side of the lobby. Then, see if any of the avatars have a green arrow pointing upwards flashing next to their name. If you find one – splash the cash and level up the hero.

As we said at the beginning of this list – you will need all the help you can get when playing this game. To clarify, the enemies in the arena will be a tough nut to crack, especially when you start playing against other real players. For that reason, it is important to unlock powerful heroes and use them in a tactical way. Also, the game allows you to unlock new skills and to improve them as well.

The section with the skills and powers is also located on the left-hand side of the lobby screen, under the Heroes section. By clicking on this icon, you will be taken to the library of skills. Among others, you will notice formidable abilities, such as the Timer Bomb, Deadly Beam, or the Bullet Valley. Either one of these skills will do wonders for your cause, annihilating enemies with ease. In addition, don’t forget to level up the skills whenever you get the chance! 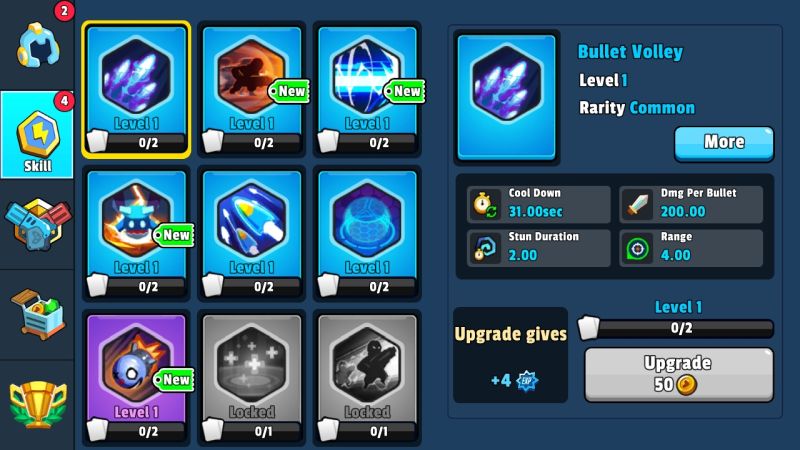 The arena in Heroes Strike is not a welcoming and hospitable place. In fact, the enemy will have no mercy for anyone who enters unprepared. As we said in the previous chapters, it is crucial that you upgrade your heroes and their skills as you progress through the game. Yet, sometimes you will need a bit more help. Well, here is another quick tip that could give you the necessary advantage over the enemy.

So, the thing you need to do is to select two skills before going to battle. That’s all. Ahead of every battle in the game, you will have an option to equip your heroes with skills. It goes without saying that players should maximize this opportunity. In other words, make sure to select two of the best power-ups at your disposal. Check the features of every skill and find the one that best suits your playing style.

There you have it! This ends our beginner’s guide for Heroes Strike. Of course, if you happen to know any other useful tips or strategies for the game – feel free to drop us a line int he comment area below!