PNIX, Inc. is a mobile game developer that has been active since 2012. While the company holds merely six games under its current app portfolio, it has already earned more than 20 million downloads from all its releases on the Android platform alone. Mini Golf King, Gun Zombie, and Castle Burn are PNIX’s top games with Mini Golf King earning well over 10 million downloads. Each of the company’s titles enjoy a well above average user rating from its players as well.

Golf King – World Tour is PNIX’s latest mobile game, which takes a more mature swing towards the sport compared to the developer’s popular mini golf game. Golf King – World Tour offers realistic golf courses that you can play on and compete in real time against friends and other players. You can also customize your avatar from models, clothing, accessories and even winning gestures that make each victory even sweeter. Each win can earn you better golf clubs that can be further upgraded to increase its power and accuracy on top of other important stats. If you enjoy golf games characterized by relatively simple controls and fairly competitive gameplay anyone can enjoy, then be sure to give Golf King – World Tour a shot!

Anyone can easily pick Golf King – World Tour up and play it within minutes as the controls and mechanics of the games are as simple as they come. Tapping and holding makes the entirety of controls to adjust your aim and your swing power. Beyond that, it’s just a matter of timing to determine the accuracy of the shot in line with current wind speeds and direction.

With the first few matches being more of a trial game, it’s enough to give you a good grasp of the controls and prepare you for the more competitive matches ahead. If you are having a hard time winning matches or landing your shots close to where you want them to, then check out our Golf King – World Tour beginner’s guide for some useful tips, cheats and strategies!

If you have played several golf games before, then you know that there is always more than one way to get through each course. Although in some cases, the path seems a little obvious and straightforward, some courses are strategically designed to make it so that the shorter routes to take are the more challenging ones. With bunkers and water hazards littering some courses, as well as trees that may block an otherwise better direction, going for a more conservative approach and choosing to play safe should be your general strategy. 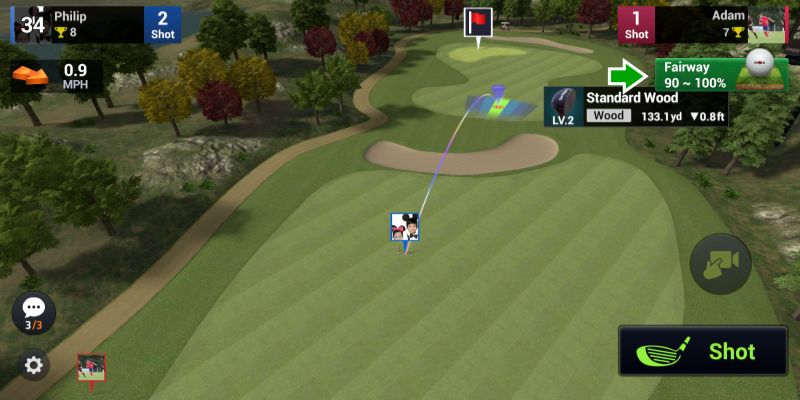 Before you proceed to go for a more aggressive path, make sure that you have mastered timing each shot as well as secure a firm grasp on the impact of winds based on their strength and direction as well as the relative angle of your shot. While the latter may prove to be the bigger challenge, the best way to get good at it is through practice.

2. Use Rythmic Counting To Get The Timing Right

One of the most basic things you need to master early on in Golf King – World Tour is timing the release of each shot. As you tap and hold at the start of each shot, you will see a meter appear above it with a moving line across bars to indicate varying levels of accuracy you can make on a shot. Your objective is to hit the yellow center area of the bar to more closely have a result close to the shot projection at the start of your turn. 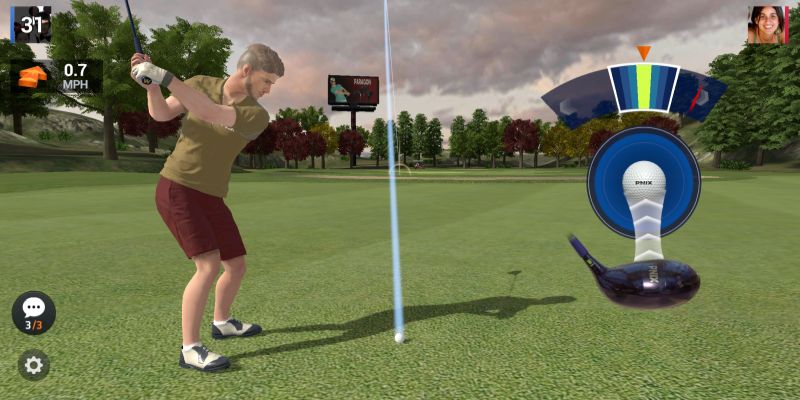 Depending on the quality and level of your golf club, the speed at which the line moves may vary and in this sense, it will be a little more challenging to secure a perfect shot with lower level clubs. In any case, however, counting each time the line hits the spot for a perfect shot should help you time its release. Take note as well that as much as perfect releases should net you a result close to the projected shot, the wind’s speed and direction can still impact the end results differently.

Keep in mind that you also need to make a shot within 30 seconds. While using rhythmic counting can help you make a perfect shot, it can also lead to taking a little more time before making a shot especially if you are still adjusting to the method. As such, make it a habit to stay conscious of the timer without even bothering to look at it at the top of the screen. Be conscious just enough to keep track of the remaining time while counting off to time your shot.

3. Don’t Use Too Much Power

The power of the shot and resulting distance the golf ball can travel to depend largely on how much power you invest on the shot. Although the initial shot from the teeing ground may preferably have as much power in it as possible, the same does not always hold true for most succeeding shots, especially in the greens. As every bit of pull you exert while holding down a shot can increase power, pulling it all the way will give an indication that you are using too much power. While seeing the “Over Power” indicator is a clear sign that you are pulling too hard, there will be numerous scenarios when using power well within what is acceptable can still be more than what is needed for you to get the results you want. 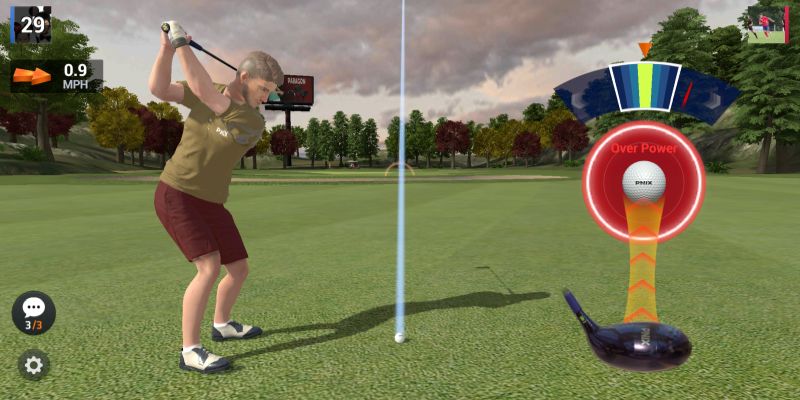 For beginners, it will not be as critically important across the fairway given that there are plenty of similarly favorable spots within the area you are targeting. Within the putting green, however, extra care must be observed with each stroke within the greens especially with chances of making a putt. Despite the holes in Golf King – World Tour being bigger than actual holes or virtual ones in other golf games, it is still possible to miss a putt due to excess power rolling the ball out and away from the hole.

4. Enhance Your Clubs As Soon As You Can

On top of coins and experience points you earn after each win as well as accomplishing quests, you can obtain various packs that contain different golf clubs. You can access the different clubs you have and upgrade them by tapping the golf bag icon at the left side of the screen. Once you have opened several packs, you will obtain extra copies of clubs. You can easily determine clubs that you can upgrade through notifications within the club page and beyond having enough extra copies of the clubs, you will also need coins to do an upgrade. 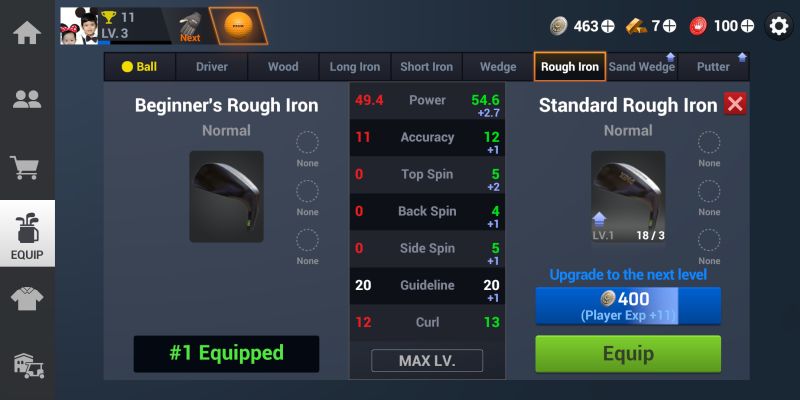 Upgrading increases the stats of the golf club, which is why it is best to upgrade them as soon as you have the needed resources to do so. Beyond contributing positively to your performance in the succeeding matches, you will also gain some experience points from each upgrade. Just be sure to leave enough coins for you to continuously be able to pay for match entrance fees. Beyond that, prioritization as to which clubs to upgrade first should be based on the ones you use more often.

Beyond the immediate rewards you earn after each match, there are extra quest points and club packs you can earn by accomplishing quests. You can tap on the tier banner at the upper right side of your screen to see your current tier as well as the rewards you can earn by progressing through to the succeeding tiers. Under the quest tab, there are simple objectives you can accomplish to earn the respective rewards. 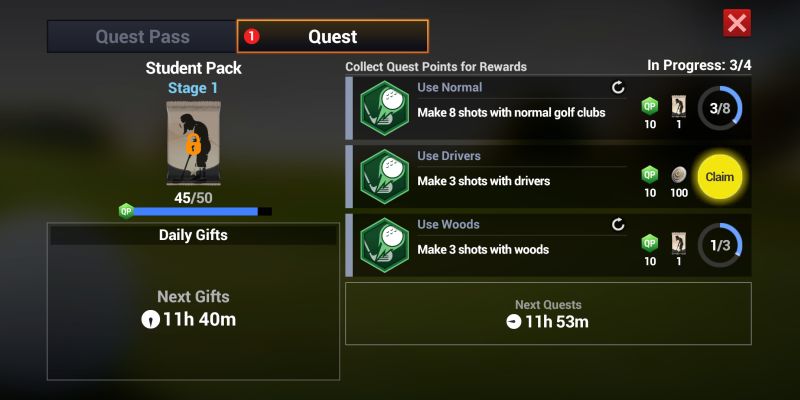 For the most part, the objectives you need to meet fall well within the activities you do within any match. Given that there are no stamina limitations or similar game mechanics that delimit how much you can play, you can easily achieve all 4 daily quests after playing just a couple or more matches.

6. Watch Ads For More Coins And An Epic Pack

While you can expect that most, if not all, free-to-play games that do not mainly bank on in-app purchases rely on the existence of ads to keep the game running, Golf King – World Tour does not hamper gameplay in anyway with ads that pop up while you are playing. 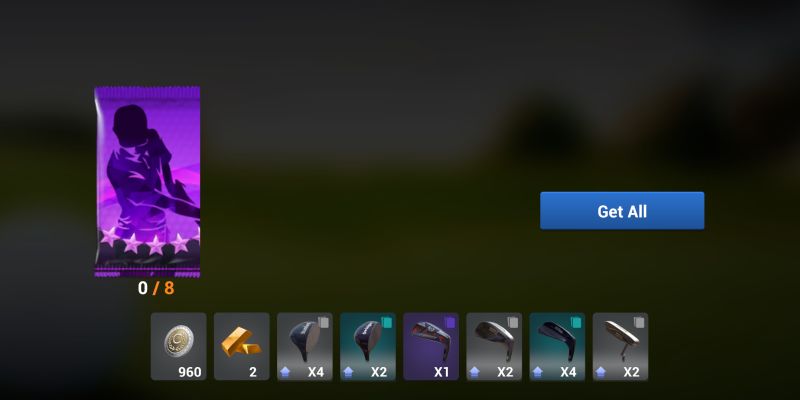 There is also a set limit as to the number of video ads you can each day for extra rewards. This can be done through the “play button” icon at the lower left side of your screen. If you can, you should watch ads continuously until you get the top reward before you start playing. You can earn a lot of coins after watching through the initial ones and receive an elite pack after watching the last ad. As you may get some upgrade materials from it, it would be best to secure it first and upgrade clubs if possible before engaging in any match at the start of the day.

There you have it! This ends our beginner’s guide for Golf King – World Tour. If you have played the game for quite some time and have likewise discovered some tips or strategies we have not mentioned in the article, feel free to share them with us!

When I open certain packs I have gold bars but they don’t register or add on to my current number. Why?

I've seen 2 colors of wind circles in this game...green and yellow. I know with green, I think, 1 rung is 1 mph. What does yellow mean?

What is accuracy referring to in Golf King? Is any increase in accuracy % affecting the meter or what other way?

What are red crown chips used for?