Have you ever wondered what it would be like to be part of a gang war, but you didn’t want to get hurt? Gang Clash may be the perfect solution for you. This new mobile game puts you in charge of your very own gang. The gameplay in Gang Clash is pretty straightforward. You meet an opposing gang on the street, start the fight, then watch everyone brawl until one of the gangs has been wiped out.

Of course, your goal is to wipe out the opposing gang. To do so, you must be stronger than them. Simply having more people in your gang usually works in the early levels of the game. However, you will soon realize that numbers are not everything. There are different types of units and knowing how to use them strategically will help you win. Check out our Gang Clash guide for tips, cheats and tricks to learn how to win every fight!

Before you hit that Fight button, make sure you pay attention to the bar above it as well as the slider that goes back and forth. Tapping on the Fight button makes the slider stop, and where it stops can determine whether you win or lose a battler. You will notice that the bar has three colors: Red, Orange, and Yellow. The closer the slider is to the center of the red zone, the stronger your gang’s morale will be. If you accidentally stop the slider on top of the yellow zone, your gang members will just shuffle around on the street, waiting to be beaten to a pulp. 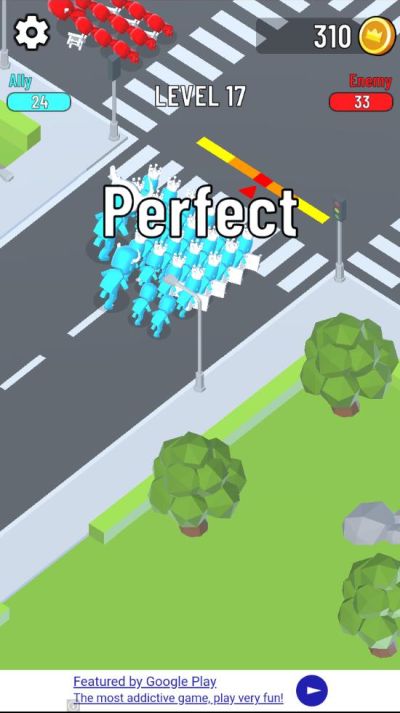 At the end of each round, you will have the option to buy additional units by tapping on the middle button at the bottom of the screen. You will need to spend gold to purchase new units, and the cost goes up after each summon. The result of each summon is random, but you will often be given a choice between two units. The first option is just a random unit that you can claim immediately. The second option is a unit that you need or an upgraded one. You will need to watch a video advertisement to claim the second option. 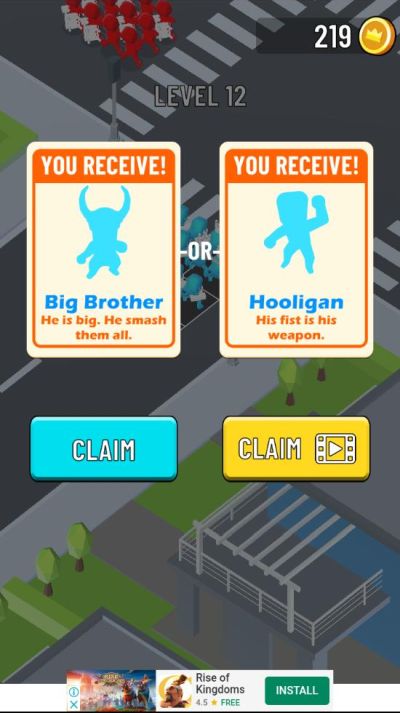 Once you use up all your current money on purchasing units, the purchase button will change into an ad offer that will give you yet another unit for free if you watch a video. Keep in mind, however, that you will not be able to receive this offer if there are no empty slots on your team. Always buy new units at the end of each round in order to claim the free unit and to make sure you will be strong enough for the next levels.

3. How To Unlock Better Units 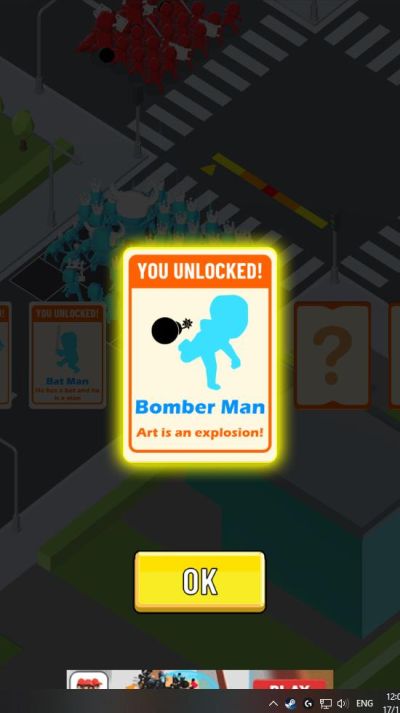 When you start out in Gang Clash, the only unit you can purchase is the Hooligan. To unlock better units, all you have to do is keep progressing. As you reach milestone levels, new units will be unlocked. Unfortunately, you don’t automatically get those new units. They are only added to the pool of potential units that you can acquire when summoning. New unit types are usually better than old ones, so if you are given a choice between two 1-star units, and one of them is newer, always choose the new one. 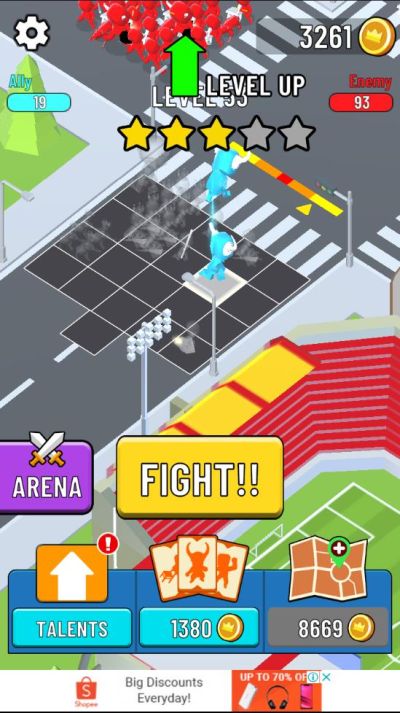 Once you have two 3-star Hooligans, combining them will result in four Hooligans with a white crown. You can keep combining your units until the stars are maxed out. When you pick up a unit, all other units will be greyed out except for those identical to the one you are holding. This makes it easier to see if there are any units that you can combine.

Don’t be afraid that you might end up with less units on the field. Evolved units are always stronger, making it easy for them to take on multiple low-quality units. On top of that, combining units also helps free up space for new units. Otherwise, you would be forced to purchase new slots which are more expensive than new units.

Even if you have a lot of powerful units, if you don’t position them correctly, you won’t survive the higher levels of the game. Pay attention to each unit’s role. For example, Chair Throwers are ranged units that deal a lot of damage, but they are squishy. If you put them up front, they will get trampled before you can make sure of their attack power. Make sure you put melee units in front of them like the Hooligan and Big Brother. This way, they can safely attack from a distance for a while before the enemy units get to them.

You should also pay attention to where the enemy units are. There are three lanes in battle, and there are times when the enemies will only be occupying one or two lanes. When that happens, make sure you position your melee units near the side where they will most likely encounter the enemy units first. Once you have more unit options, you may want to put a few melee units at the back line for when the enemies have jumping units like Doggo. The melee units at the back can help the ranged units fend off those bad Doggos.

Once in a while, you will encounter a single giant unit on the enemy team. You will notice that this giant doesn’t seem to go down no matter what you do. Don’t think that you are losing when this happens. Boss stages are for collecting a lot of gold. The goal is to keep beating on him until time runs out.

Of course, you also have to make sure that your units survive until the end of the time limit. If they get wiped out before the time ends, you will lose. If your units survive, you get a lot of gold because every punch your units throw will make the Boss drop coins.

When you reach level 20 in Gang Clash, you will be able to unlock Talents. These are various perks that would help you in battle or give you discounts when purchasing new units. Each purchase costs gold, and the price will go up every time. You won’t be able to choose which Talent to invest in, but if you get a duplicate, that Talent gets upgraded. Since they are all useful, you can’t really go wrong in investing in Talents, but there is a way to get them for free. 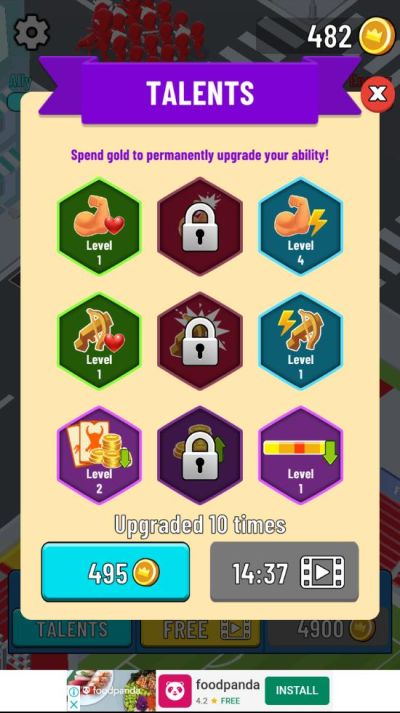 Every 15 minutes, the game gives you the chance to unlock a Talent for free in exchange for watching a video advertisement. If you are diligent enough in watching ads every 15 minutes, you may never need to pay for a single Talent. Just make sure you remember to go back and watch an ad because the 15-minute timer will not start until you claim the current freebie.

When you reach level 40, the Arena button will appear on the left side of the screen. Tap on it to enter the Arena. The Arena is where you can challenge other gangs in order to win various rewards. Upon entering, you will see the details of three opponents, including their name, level, and the reward you will receive when you win. The list refreshes every 30 minutes, but you can refresh immediately by watching a video advertisement. 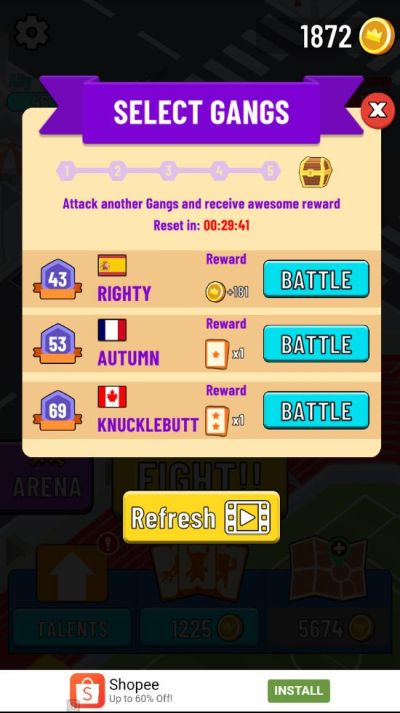 Keep in mind that these gangs are not like the ones you battle in the normal rounds. They are much stronger. That means you need to score an “Awesome” or a “Perfect” in order to take them down. Even then, you might still lose. The good news is, you can challenge them again after leveling up some more before the list refreshes.

When you win, you will receive gold or new units. The higher the level of the opponent you chose, the better the reward. You will also be given the option to claim an even better reward by watching a video advertisement. Needless to say, you should always accept the offer. Winning in the Arena is tough enough as it is, don’t waste an opportunity to get better rewards.

9. Triple Your Earnings, Here’s How

At then end of each round, you are given a reward based on the number of units you defeated. You earn gold even if you lost the round as long as you were able to take down at least one enemy. A gold multiplier will spin after the round, giving you a chance to double or triple your earnings, though there is also a chance it won’t change. 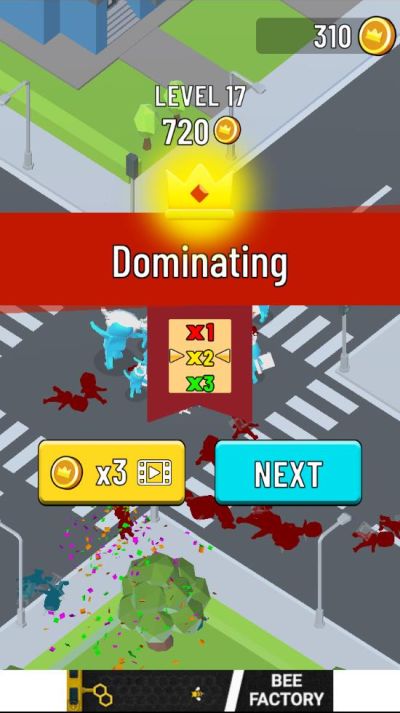 After the multiplier is done spinning, you will be able to triple the earnings once more by watching a video advertisement. That means you can earn up to 9x of the original amount if you are lucky. Always accept this offer because money is everything in this game. It helps you purchase new units, unlock slots on your team, and upgrade your Talents. The more money you have, the easier it will be to defeat your opponents. 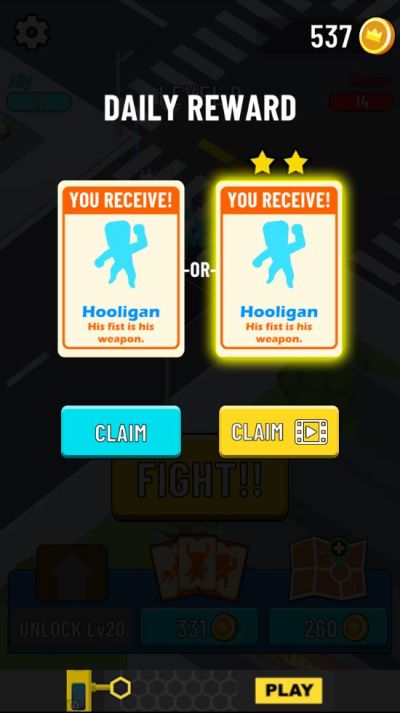 Even if you don’t have time to play, make sure you at least try to log in once per day. The game gives out daily rewards for players. All you have to do is enter the game for the first time each day, and you will automatically receive your reward. You also have the option to receive a better reward by watching a video advertisement. The ad takes half a minute, so it shouldn’t be too hard to make time to upgrade your daily reward.

11. How To Get Rid Of Distractions

As with most free casual games, one problem with this game is that there are pop-up ads. They can get annoying after a while, especially when you are on a roll and you end up losing your momentum because you have to keep sitting through an ad. Unlike other games that allow you to remove ads with a single purchase, the ads-free version of this game comes in the form of a VIP subscription. It costs $7.99 weekly and $19.99 monthly.

It seems a bit steep, but you also get daily VIP units while the subscription is active. The red zone on the power bar also becomes bigger, making it easier to hit “Awesome” and “Perfect”. A 4x option will also be added to the random multiplier wheel at the end of each round.

Now, despite all that, it is understandable if you still don’t want to shell out cash for a casual game. There is a free solution. Just play the game offline, so it won’t be able to access the ads from the server. The downside for this solution is that you also won’t be able to take advantage of any of the ad offers available in game. Playing offline is probably best if you just want to pass time and play as many games as possible.

Winning a gang war takes more strategy than you think. It’s a good thing you can rely on our Gang Clash tips, cheats and tricks above to help you win every match! In case you know additional tips for the game, don’t hesitate to share them with us in the comments below!

What are you talking about dude. If you play Gang Clash your Units are Red/Purple & if you play Cross Fight you Units are Blue/Green

Did you unlock the China Town already? Need help!

My blue units have turned red and I don't know why. Any idea how to switch them back to blue?

So when does China Town get unlocked? I've bought all available spaces in the second town, and I need to expand.