FRAG Pro Shooter is a brand new game developed by Oh Bibi and it’s available for both Android and iOS platforms. The game is a shooter where each player controls a character of a squad of 5, while the other 4 are controlled by the AI. Players can switch to any other character whenever they wish. The objective of the game is dropping the enemy teams’ points to 0, which can be achieved by either destroying the objectives or killing enemies. There are a lot of unlockable characters, each with their own unique playstyle, and the gameplay is fast paced and rewarding. In this FRAG Pro Shooter guide we will share some tips, cheats and tricks to get you started with the game and improve your chances of winning tournaments.

1. Learn What Every Character Does

As with all class-based shooters, learning what each character does is vital to ensure you increase your chances to win games in FRAG Pro Shooter. For example. knowing Jet can fly with her jetpack won’t leave you with a puzzled look on your face when she gets to the high ground, but will instead have you figure out how to respond to that. Another thing to learn is how their weapons function. For example, some weapons hit almost immediately after shooting, while others, such as Big Paku’s Rocket Launcher have a delay between the moment when you shoot and when they actually hit. Keep in mind that different weapons have different projectile speeds.

Learning how to hit with each weapon while aiming is fundamental to gain the advantage during gunfights in FRAG Pro Shooter, so make sure to practice it as much as you can! You can check what each character’s ability does, its cooldown, range, damage, and any additional information (for example, Big Paku’s ability pushes back enemies hit), by tapping on their icon and then tapping on the Info button. 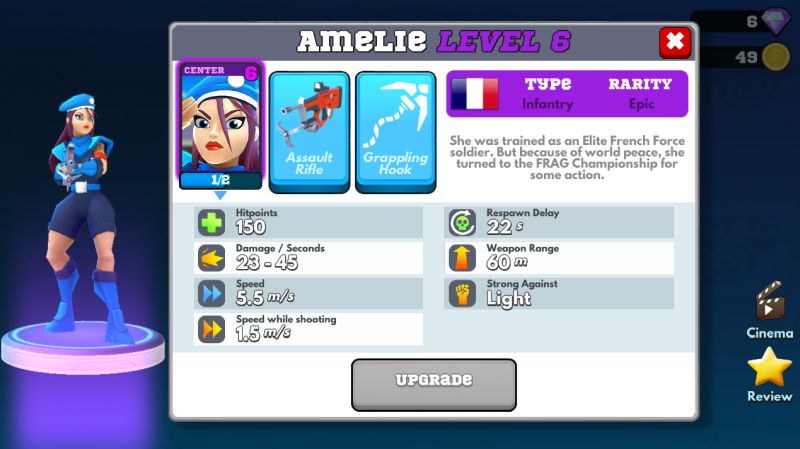 On this screen you can also check every character’s Hit Points, DPS (Damage Per Second), how fast they move, and how fast they move while shooting. If you tap on the weapon’s icon you will be able to see additional information about it, such as how many ammos are held in its magazine, how long it takes to reload it, it’s fire rate, and the base damage of each bullet. Every character belongs to one of 5 categories: Attack, Defense, Camp, Center, and Wildcard, and what this classification does is telling you which one of their stats are better compared to other characters. Attack shooters deal more damage, while Defense shooters have more Hit Points, Camp shooters are better at long range fights, while Defense shooters excel at defending your own objectives, Center characters are jacks of all trades, and can do a fine job in any role you want them to.

There’s a lot to know about, so my suggestion is to first get accustomed to the characters you get at the start, since most of your opponents will also have access to the same pool, and then work your knowledge up from there. Don’t worry, you don’t need to know all of these numbers by heart, but make sure to at least know the basics of every character.

To unlock new shooters, you need their respective cards, which you can find in the chests you get by playing FRAG Pro Shooter. You can build up to 3 different teams, which will allow you to test which team composition you like the most without having to switch out cards after every game. Once you’ve decided which shooters to use, you will also have to upgrade them. In order to upgrade them, you will need a certain number of cards of the shooter based on the level they are currently at, and gold. You earn gold by playing the game. You should upgrade all of the shooters you use regularly, and focus your resources on your favorite ones. Make sure to not waste gold on shooters you don’t plan to use a lot, unless you plan to spend money on the game.

Having upgraded characters is the second most important thing in the game, right after playing well, since higher level characters have better stats, which makes them deal more damage and last more in battle. Different characters can be unlocked from crates you find in different worlds, so you will need to progress in the game before having access to all of them. Don’t worry, all of this comes naturally with playing the game. Building a team takes time, since you’ll have to wait a decent amount of time to open chests if you aren’t spending money. Every character has a role they excel at, so make sure to build a balanced team composition. Leveling up your profile gives your tower and bunker extra Hit Points.

There’s a lot you can do while in battle other than shooting. You can switch to any character by tapping on the minimap on the top left corner, and then tapping on the icon of the shooter you want to play as. You also have to switch to an alive character every time you die. Next to the minimap you see an icon with a camera on it. Clicking it will let you switch between 1st and 3rd person view. While 3rd person view is generally better for the gameplay, 1st person is very nice if you need to aim certain abilities better, for example Amelie’s Grappling Hook. 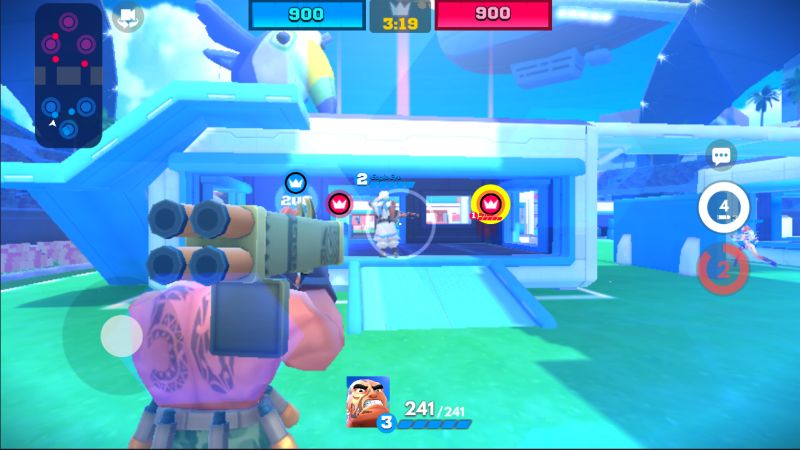 On top of the screen you can see the amount of time left before the match ends, and how many points each team has left. When a team’s points reach 0, that team will lose the match. When the timer reaches 0, the team with the most points left will win the match. On the right side of the screen, the icon at the top opens the chat, where you’ll be able to send emoticons or quick phrases to your opponent.

Right below it, you can see how many bullets you have left in your weapon before having to reload. The game reloads automatically when your magazine is empty, but you can reload manually by tapping on this icon. This is especially useful while traveling through the map with no enemies in sight. The last icon on the right is your ability’s icon. It tells you when your ability is ready, or how long until it is. Tapping on it will use the ability towards the direction you’re aiming at. Certain abilities, like Eagle Eye’s are toggled, meaning that you can keep them on for how long you need for, if you don’t want to use them anymore all you have to do is tap on the ability’s icon again. Lastly, the crowns represent your team’s and the enemy’s objectives. You can order the AI to defend / attack the objective simply by tapping on its crown.

An important gameplay element is that falling into the water will instantly kill the shooter, so you can use an ability that displaces your enemies, such as Big Paku’s Rocket Burst to push them in the water and getting an easy kill. This makes mobility abilities like Amelie’s Grapping Hook and Jet’s Jetpack more valuable if you have quick fingers, as they can allow you to recover from an attempt of throwing you in the water by your enemies. Shooters with the Camp role can make very good use of high grounds and covers to snipe from far away to help your aggressive shooters push through your enemies’ lines. Med kits spawn in specific points of the map, and they heal your character by a percentage of their maximum Hit Points. There are 3 different tiers of Med kits, the smallest ones heal your character by 25%, the medium ones by 50%, and the big one heals your shooter fully. There’s only 1 big Med kit in each map, and it’s always at the center of it. Knowing where the Med kits are will let you to escape death and turn around a fight that was going poorly.

There are Gold coins and Diamonds scattered through the map in some games. Picking them up will bolster your resources, although the Diamonds are gated by a paywall. You can get a lot of Diamonds this way by paying a modest amount. Gold coins are important to update you team, you can even purchase Diamonds with them, so make sure to collect them. Sometimes when the timer is about to run out you will see “Frenzy Mode” on top of the screen. Which means all the points losses will be doubled until the end of the game. This is a great way to stage a comeback, and it will keep you on your toes if you are winning. When your magazine is running low on ammo, look for cover while you reload. You should also look for cover if your ability that could turn the tides of the fight is about to come off cooldown. Quick decision making is instrumental to your success.

5. Learn How To Fight With Each Character

Learning to move while you’re shooting is the most important thing when it comes to winning gunfights. Making it difficult for your enemy to hit you (especially with weapons with slow projectiles, like Big Paku’s Rocket Launcher) will greatly extend the lifetime of your shooter. Living for longer can be the difference between winning or losing the game. Getting one extra ability off, reaching a Med kit, or simply killing your enemies faster than they kill you are why you should master the art of moving while shooting. It comes naturally with playing, so don’t fret over it if you aren’t good at it at first, practice makes perfect. Your goal is to maximize your damage output while minimizing the amount of damage you take.

6. Login Daily For Goodies, Check The Mission And Shop Tabs

As with every free to play title with unlockable content, the Missions tab is very important, you can access it by tapping on the Medal in the main Battle screen. Here you can keep track of what you need to do to get extra goodies from the game. Tapping on the missions at the top will tell you what you need to do to get the chests. Remember to check in for your free chests, as you’ll need them to upgrade your team. You also get free chests in this tab without having anything special to do, which is very nice. You can get anything from the free chests, even Diamonds (the game’s premium currency). 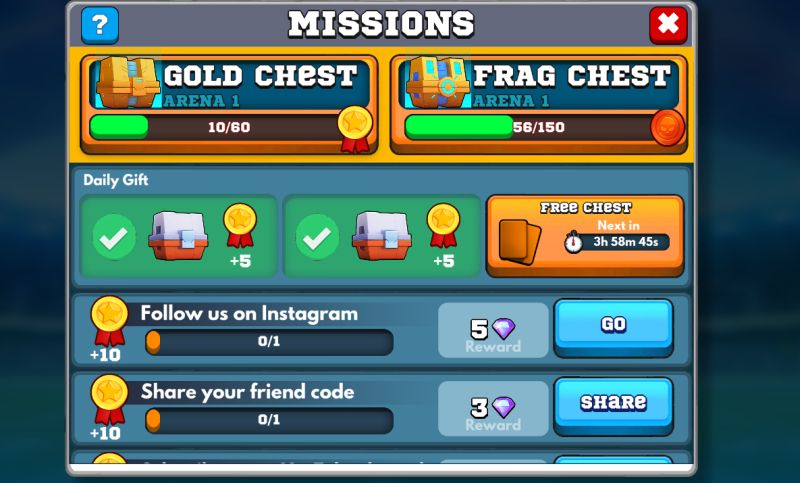 You can also get extra diamonds just by following the creator’s Instagram page, sharing your friend code (you can find it in your profile page), or subscribing to the game’s YouTube channel. By doing these quests you will unlock additional quests, like Playing Online Games or Joining a Club, so make sure to do them. In the shop you will get a free reward each day, sometimes it’s going to be Arena Points, other times Gold Coins. You also get offered different shooter cards you can purchase with Gold, so if you want to upgrade your team you should visit the Shop every day.

This wraps up our guide with tips, cheats & tricks for FRAGS Pro Arena Shooter. The fast-paced gameplay, the uniqueness of each character, and the amount of unlockable content is so big that the game will keep you busy for a while. If you have any other FRAGS Pro Arena Shooter tips, cheats or strategies, then make sure to let us know in the comments!