FPS.io is a new shooter game from Nanoo Company Inc., and it seems that they once again managed to create a highly addictive mobile game. As a matter of fact, you will spend days fighting real-time opponents from across the globe. Worldwide rankings allow you to compete with people from every part of the planet, but there are many other reasons why you will fall in love with FPS.io.

Your action figures will have no mercy for the enemy, but only if you know how to maneuver them around in the Pixel-style world. Also, it is vital to know what you need to do during the shootouts, and that is why our FPS.io guide will provide you with the essential tips & tricks for surviving in the brutal world of action figures. With that said, let’s move on to our FPS.io tips, cheats and tricks in a complete strategy guide! 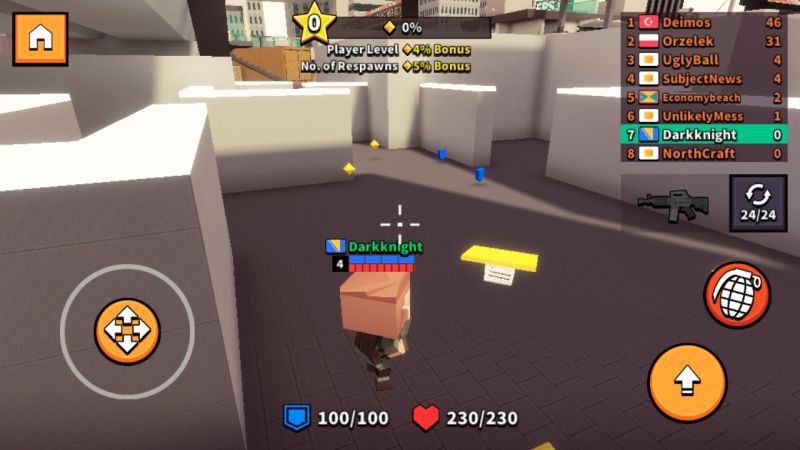 The map of FPS.io is relatively small, but it does offer enough opportunity for playing hide and seek. In other words, you can hunt your opponents down or you can hide and wait, but once they realize your position – it’s time to beat it and get to safety! Unfortunately, it is not always easy to get out of sight instantly, and your health could take a serious beating before you even realize what is happening. The armor and health in the initial stages of the game are easily harmed, and it will not take much for them to disappear altogether.

For all of these reasons, constant movement is your best option. As they say – the enemy cannot kill what he cannot see! During gameplay, the players will see a yellow arrow in the right bottom corner, and this arrow is the symbol for „jump“. If you combine this option with directional arrows, you can make giant leaps which can take you away from the immediate danger.

Once you get far enough – you can turn around and make the opponents feel very sorry for pointing their rifles at you in the first place!

2. Collect Stuff Along The Way 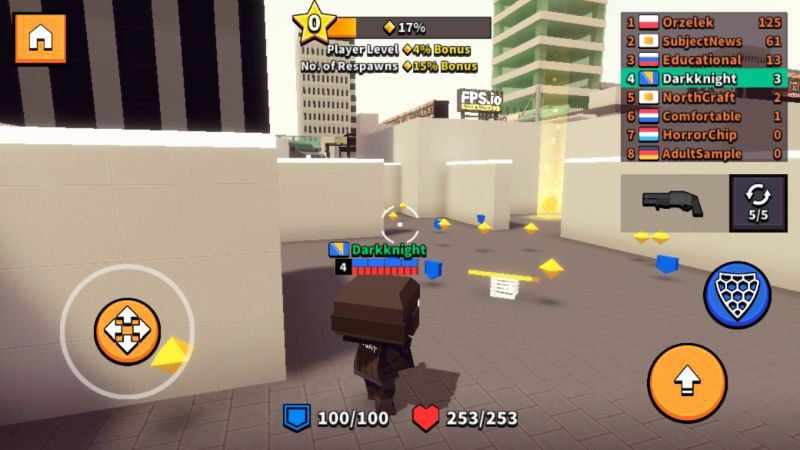 Moving around all the time and avoiding getting killed will probably take precedence over everything else when playing FPS.io. However, we suggest you invest some effort in collecting those blue, red and yellow symbols which lay scattered all around the map. Novice players will quickly realize the purpose of those symbols:

Blue represents the ‘armor’, and you will see the status of your armor in the bottom of the screen during gameplay. Needless to say, the strength of your armor can save you when the going gets tough. Yellow represents ‘experience’, and you will notice the gauge in the upper portion of the screen change as you collect the yellow symbols. Red represents ‘health’, and we all know why this element is precious. If you happen to be wounded, try to collect a few of those red hearts because they can prolong your gaming session.

Once you are familiar with the symbols, accumulate them in accordance with your needs and gaming style. Most importantly, they can mean the difference between a successful and unsuccessful session, and since you only get four respawns – better make them count! 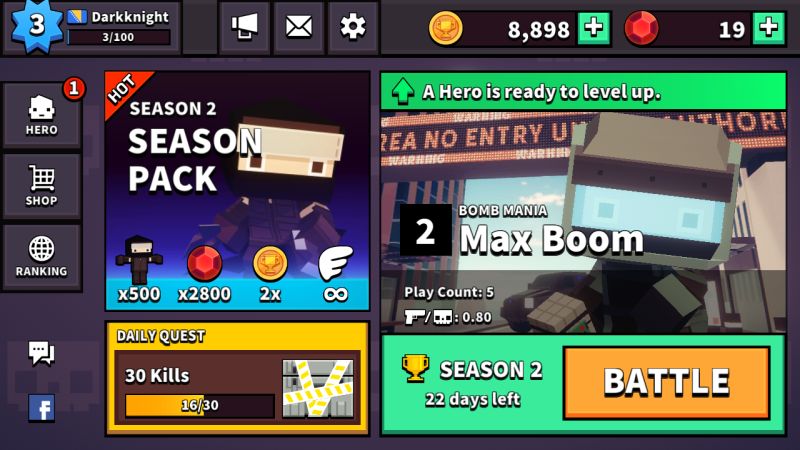 Stronger characters will give you better chances of surviving close encounters with players from across the world, and the only way to make your action figures stronger is by using strategic power-ups. Your team in FPS.io will consist of four ‘specialists’ at the very start of the game, but later you will unlock some other characters as well. All of them have their own strengths and weaknesses, and this diversity will test your intelligence and adaptability.

However, all of your heroes can level up, and this means that their features, such as ‘damage’ or ‘range’ can be improved as well. Once you level up your hero, they become more agile, stronger, and most importantly – more deadly!

On the left-hand side of the welcome screen, you will see the ‘heroes’ section. Pay attention to notifications in this area because they will show you the moment when one of your characters is ready to move to the next level.

Use the coins wisely and invest in power-ups which will increase the overall success of your team. A well-balanced group of soldiers can earn lots of kills, and that is why upgrades play a vital role when playing FPS.io.

Collecting kills is the goal of the game, and your mission of a bounty hunter will not always be easy to complete since you will be up against sharpshooters from all over the globe. All of you will be thrown together into the gladiator pit and then your survival instincts should start kicking in. No matter if you are in control of a character armed with a sniper or a bomb – your job is to collect the kills and stay alive for as long as possible.

Daily challenges are a feature which can help you on your way, and every experienced player will pay attention to this useful segment of the game. When it comes to FPS.io, daily challenges consist of a certain number of kills you need to achieve within a 24-hour period. At the very start of the game, the milestone is set to 30 kills, which should not be too demanding of a task.

Of course, the overall strength of your team will affect the speed at which you collect the kills. However, strategic movements and proper timing can do wonders in the arena, and we advise our players to always think one step ahead and to try and predict what the enemy will do next. 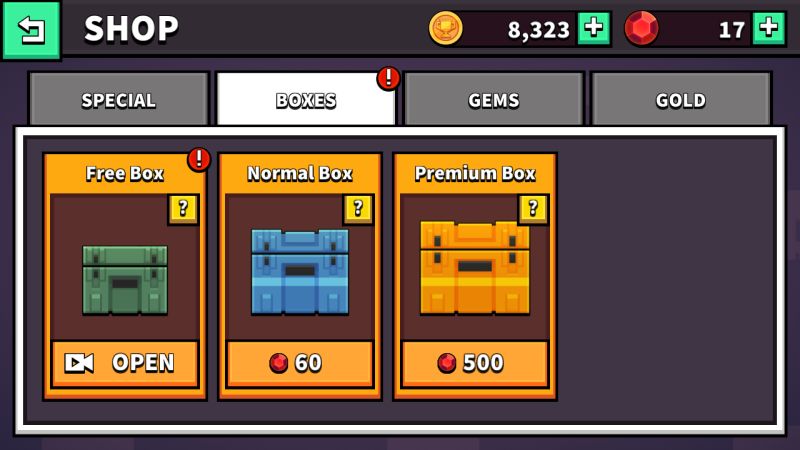 Another helpful feature in FPS.io is the use of boxes as a way to entice the players with free stuff. After all, everyone loves gifts, and who would say no to a present which can significantly boost your chances of survival in the gaming arena?!

The ‘Shop’ on the lefthand side of the screen will take you to the Boxes, and you can collect a free box every 15 minutes. The task you need to complete before opening the box is to watch an ad, and we advise the players to “invest” those 30 seconds and collect valuable rewards. Freebies in FPS.io will boost your cash balance, your number of gems, but if you are lucky – you can also receive important power-ups and upgrades.

Aside from the free Box, the game also offers the so-called Normal and Premium box. Unfortunately, they do not come free of charge, and you will need to sacrifice your hard-earned gems if you want to see what is hidden inside one of these. The Normal box will cost you 60 gems while the Premium one will require 500 of your precious stones.

6. Use The Sniper Wisely 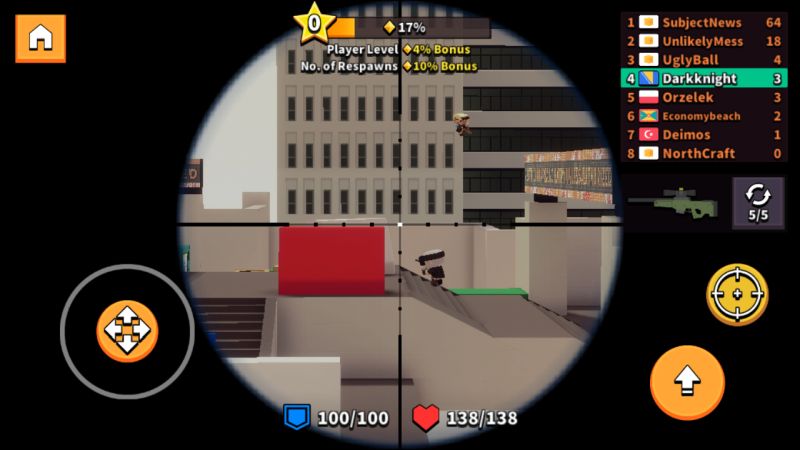 Eva, or the action figure with a sniper rifle in hand, is one of the most powerful characters in the FPS.io. Of course, you will need to know how to use her strongest assets to maximize her potential. Her armor is not the best, but the range and the power of her shots are a sight to behold! That is why you can earn a couple of kills every time its Eva’s turn to cause havoc on the battlefield.

Just like any other sniper gun, the rifle in the FPS.io has a telescopic vision which can make faraway objects look like they are placed on the palm of your hand. Since the shooting in the game is automatic, every time an enemy enters the crosshairs – bam! Congratulations, you got yourself a headshot or a critical hit, at least.

The best strategy for using the sniper is to be sneaky and find a concealed position, preferably on the higher terrain. By doing so, you can avoid detection, and the opponents will wander right into the trap without ever knowing what hit them. Unfortunately, you will not have a „flanker“ or a „spotter“, and it is imperative that you look around every couple of seconds. Whether you like it or not – the enemy can be just as sneaky as you are! 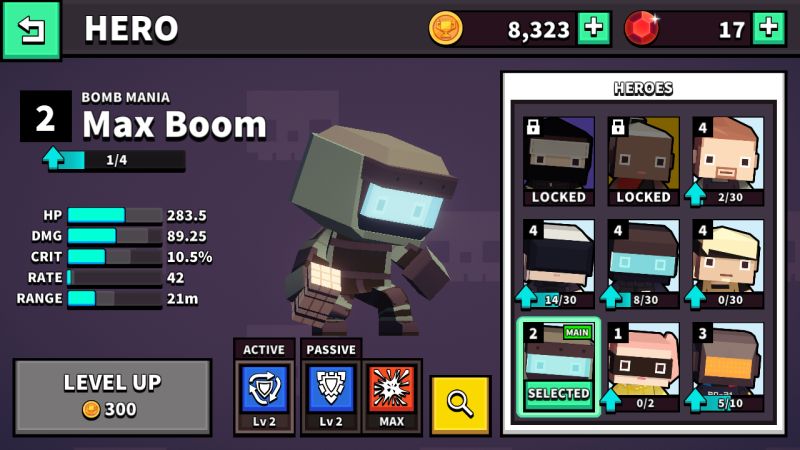 The action figure with the most powerful blast in FPS.io is called Max Boom, a name which pretty much tells you about his abilities and qualities. In other words, once you target the enemy – Max will throw away a nice little package of C4 right onto the enemy. Of course, the opponents will have a hard time surviving such an attack, and that is why the bomber man is a great character to use. He is especially deadly in tight corners and corridors, i.e. in places where your opponents cannot get away easily.

Explosives and detonations can be lethal, and we suggest that you maximize the potential of Max Boom by tracking down the unsuspecting enemy and throwing the ‘package’ directly in front of their feet. If you manage to do that – the savage bloodbath will ensue, and after that – you only need to collect the experience points and enjoy the boost in your reputation level.

Another noteworthy element of FPS.io is the fact that some other characters can also throw explosive devices. For instance, the Mercenary can throw away hand grenades, and they can cause severe damage if you time their release perfectly. 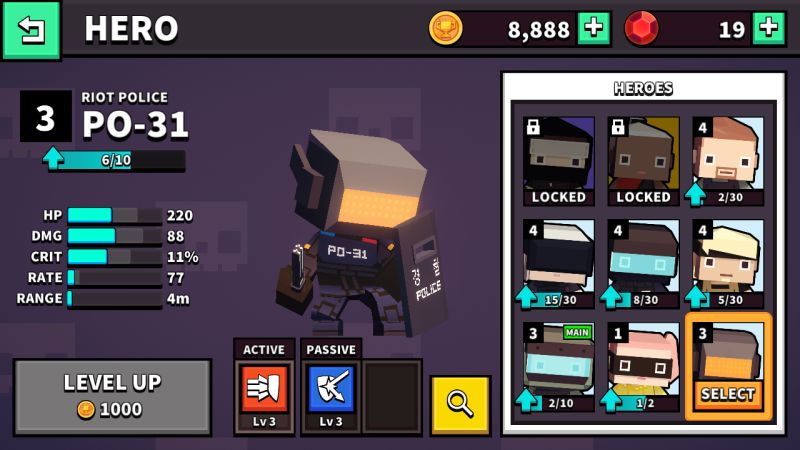 As we said earlier in this guide, the actual map of FPS.io is relatively small, and you will frequently encounter your opponents, whether you want to or not. Aside from sniper and the assault rifle, all other weapons will have a pretty small range. What this means is that the players will be involved in a lot of close combat, and that is why we advise our readers to prepare themselves for this scenario.

Your commandos and soldiers can take a beating, but the best option for direct fighting is the member of the SWAT team. This hero is called Wesker, and he is equipped with a powerful shotgun. Also, his stats for damage and HP are on a high level, but the range of his shooting will require you to come in proximity with the opponent.

The member of the riot police can also be of use in direct confrontation, and his baton can make the opponent unconscious and dizzy while you drain their health points. Either way, the guys from the police are a force to be reckoned with, and they could earn a few kills for the team every time you deploy them.

Another important hero in FPS.io is called Alex, and he seems to be an engineer. He packs a small machine gun, better known as ‘Uzi’, and his shooting power is not all that great. To be honest, it will take a while before you finish off the enemy using Alex’s weapon, and most of them will get away before you complete the job.

However, this little guy has an ace hidden up his sleeve, and his ‘secret’ weapon comes in the form of a stationary machine gun. If you use the option on the right-hand side of the screen during gameplay, Alex will drop the turret, and this submachine gun will lock the targets and spit out ammo independently. In other words, you can get behind the covers while the enemy tries to fight the present you left them.

The Engineer is a powerful asset, and you should use his characteristics wisely. We advise the players to combine his secret weapon with strategic positioning, i.e. to drop the machine gun in an area where the opponents frequently walk by. Once they get in range, the turret will set off on a killing spree, and you can watch the action from a safe distance.

Since this tip concludes our 9-point checklist, we sincerely hope that our in-depth FPS. io guide can help you defeat as many opponents as possible. If you are familiar with any other tactics which can be of use when playing this game, please leave them in a comment down below!