Force Master, an addictive mobile game designed and released by Voodoo, will help you on your path to master your telekinetic skills and improve your control with the force. This French game studio is behind a number of popular mobile titles, such as Helix Jump, Scribble Rider and Uphill Run to name a few. You can count on them to continue making smash hits, and Force Master will also keep you glued to your phone while you traverse the various levels it offers.

Throughout this Force Master guide we will be tackling the different tips and strategies you can use to complete all the levels. We will also talk about the different ways of spicing up your game in the long run – ways to give it a little more variety. The basics of this game are pretty effortless to pick up and learn, but there are other factors to Force Master that you’re going to have to learn if you want to make the most out of your experience.

So, sit back and let your mind wander free. It’s time to defeat some baddies with the flick of a wrist.

Before we dive into the deeper layers of this game, we first need to understand the basics. Movement in this game can be classified into two parts. The first type of movement is going forward – the necessary movement to get us through a level. In order for us to move forward, we just need to drag our fingers along the screen. Remember that it is possible for you to bump into the objects that are strewn around the level. 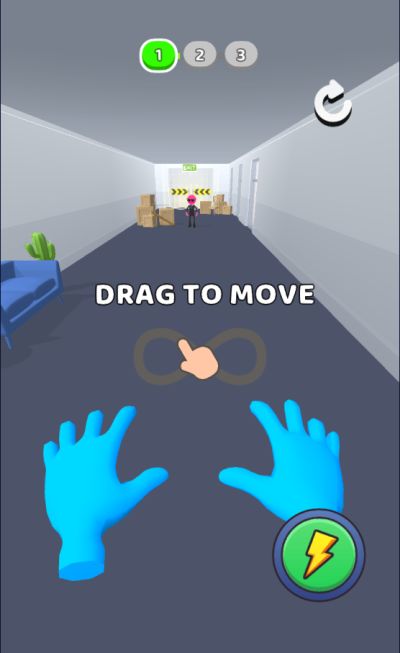 You may not see it, but I also need to use my legs.

2. Use Your Environment To Your Advantage

We talked about how we can get rid of the obstacles that block our way by just shoving them aside, removing them from our sight so we can walk past them. One other way of getting rid of them is to use them is by turning them into our very own weapons.

Being the force master that we are, we can pretty much toss around everything and anything in this game. Be it from those random boxes that you see on the right to the cars that are parked from the left – all of these can be used as projectiles to deliver a painful message to those that oppose us. 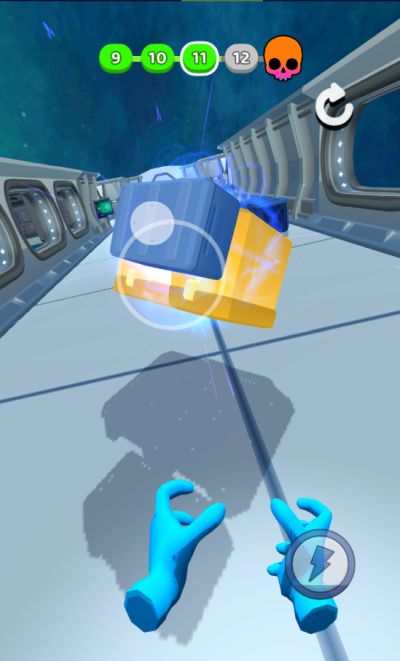 Time to chuck this in your direction. You guys ready?

As you progress further into the game and when the baddies start using projectiles against you as well, those objects that are within your field of vision can also be used as a shield mechanism to protect you from incoming damage. You don’t exactly need cover mechanics with this useful power!

While you may want some little order in your walk towards victory, order that you can achieve by moving things out of the way, it will also be in our best interest to spread some chaos to help us make progressing further into the levels easier.

Remember to be on the lookout for certain objects clad in black and yellow stripes. They’re objects you’ll have to move them to find the end of the level. These objects may range from doors that you have to physically push, bridges that you have to lower, or a little glass window to your right. They stand out like a sore thumb so it is unlikely you will miss them.

3. Protecting Yourself From Bullets And Projectiles

A few levels into the game, you’ll be introduced to other types of baddies. Initially, you’ll just see the regular enemies that walk towards you and slap you to oblivion. You will then encounter some enemies that host an arsenal of guns, some also dual wield! While we are not fully concerned with the guns that they wield since we have no control over that, we do however need to discuss the bullets. 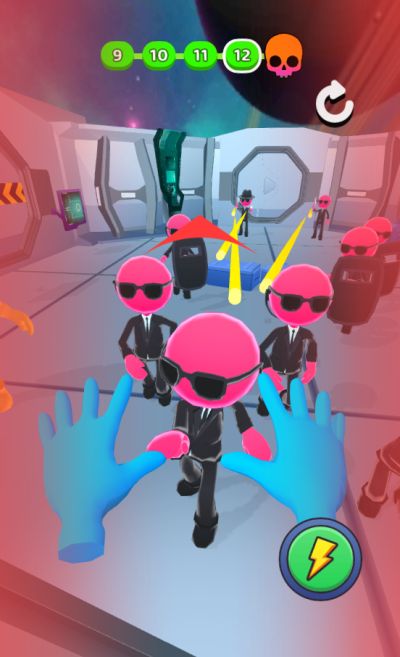 Time to send both you and your bullets flying.

Bullets show up on your screen as streaks of yellow, easily distinguishable from all the chaos that is happening across your screen. You can easily swipe left and right before they reach you so you won’t take any damage, but where is the fun in that? Let’s make use of them and swipe towards the direction from where the bullets came from to reflect them back at the baddies that fired them. If they hit any unprotected enemies, they’ll die on the spot. Nothing like turning a good defense into a good offense, right?

4. Arming Yourself With A Weapon Of Your Own

There are certain stages where there are mini-turrets firing at you. There are also some stages where there is a random bazooka lying on the ground. Rather than just swiping away at it and disposing of these interesting weapons, why not make things a little interesting? Grab that little thing off the wall or pick it off the ground and plow through the enemies that stand before you. 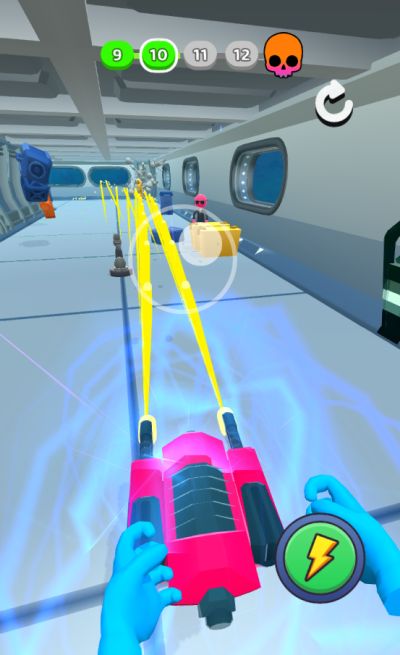 Two can play at that game. Say hello to my little friend.

It’s quite sad that you can only use these weapons while stationary and you can’t carry them through the rest of the level, but it’s a big help to clear a lot of enemies in a short amount of time. You can also have a little fun and kill off every enemy except for one, then chuck the weapon you used to finish off the last guy.

5. Don’t Rely On One Movement

There will be times that you might get tired from all the box lifting and bullet deflecting that you’d decide to just use one movement to clear the whole level. This is actually an okay technique but there are levels with swarms of enemies that won’t be so easily cleared with simple movements. 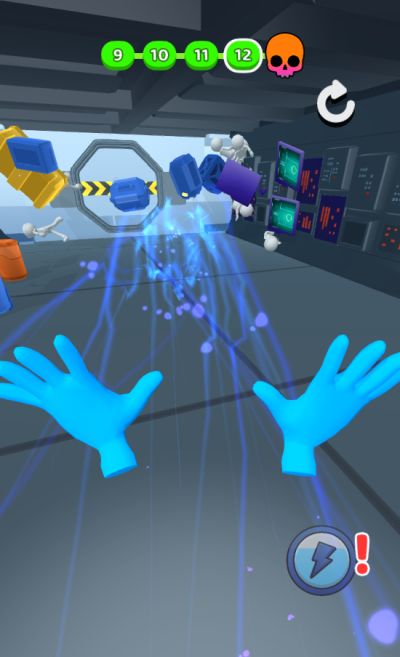 Aside from just the enemies, there will also be moments that just pushing and pulling will hinder your progression due to the environmental debris that might block the door to the next room.
The best practice is to always try to mix up your moves. This will also make the game more interesting since you’ll see plenty more interactions rather than just seeing your enemies fly away from you.

Every few levels, you’ll be pitted against a boss. It’s usually a one versus one fight set in a small stage with different objects spread across the room. The boss also usually is dual-wielding pistols with a high fire rate, something that we should be concerned about since we can only take a few bullets before having to restart the level due to dying. 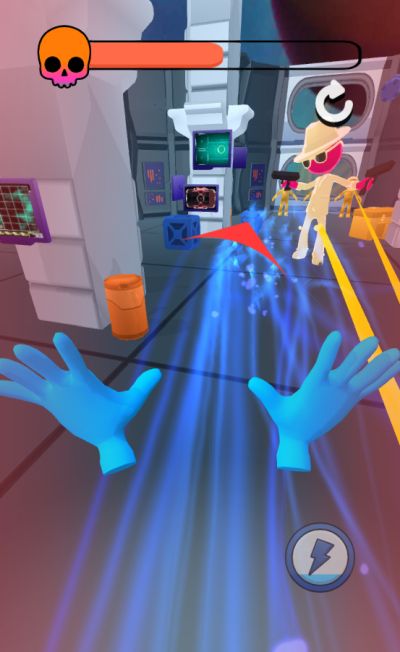 Who brought guns into a telekinesis fight? You sure about that?

You can take the easy way out and just throw some objects to the boss, hitting him with that barrel, then with that box, then with a little push or two until he dies, but where’s the fun in that?

Remember when we had the talk about reflecting bullets back to where they came from? This is the best place to test your skills and see if your practice has really paid off. You can challenge yourself to try and get rid of the boss using just the bullets that he fires at you.

One other thing that we should take note of is that little circle with the little lightning icon inside. It’s our special move that will help us clear some hard places at certain levels. This special move charges up whenever we kill an enemy. It takes roughly ten to thirteen kills for it to fully charge, making it usable at least once or twice per level if ever you use it instantly when the charge is full.

You should not get into the habit of instantly using this handy skill whenever it’s available though. It is best if you save it when you are dealing with a massive force of baddies. This is so you can avoid taking damage and just instantly clear that big wave of baddies. 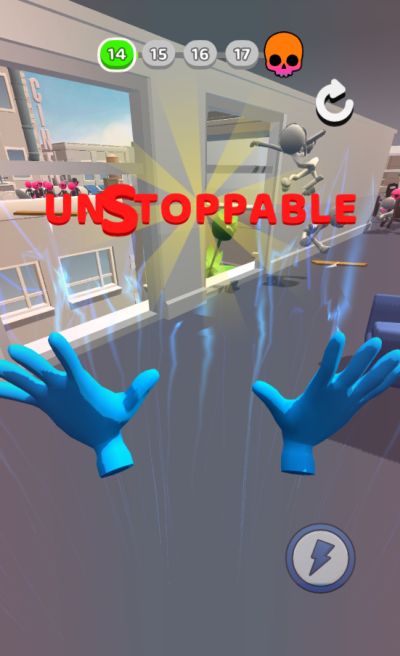 Excuse me, coming through, nothing to see here!

Breaking the habit of wasting your special move on a couple of enemies will make things easier for you when you reach the higher levels of the game. Use it sparingly and you’re sure to go the distance, as well as your enemies as they go flying about due to your telekinetic prowess.

8. Other Points Of Interest

There may come a point where you’d like to challenge yourself to make things a little more interesting. If killing bad guys is not enough entertainment for you, you can step it up a notch and give yourself the requirement of clearing the stage without getting hit even once. 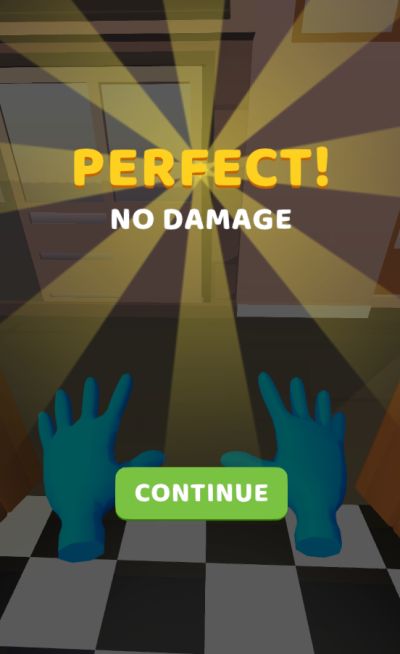 Practice may only lead to perfection.

You will be surprised at how this might change your gameplay. You might just spam certain flicks just to instantly get rid of any enemies along your path or you may resort to being too defensive just so no bullets will touch you.

Won’t it be interesting to have a game mode where you will fail it if ever you take one instance of damage? Let’s hope that Voodoo gives us a mode like that in the future iterations and updates of the game but for now, let’s settle for seeing that PERFECT screen at the end of the level.

Let us change things up a notch and give ourselves a requirement in beating a level. Challenge yourself in clearing the level only with the usage of the objects scattered around the stage. No pushing or pulling, or making the enemies fly across the stage. No deflecting bullets as well. Only crushing them with different types of objects will do. 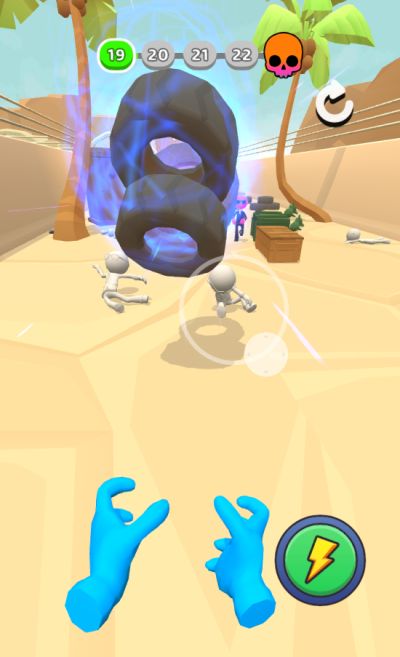 I will not lay even a finger on you.

This will give you the opportunity to appreciate more of the game by looking into tactics as to how you will be using the different objects in conjunction with each other. Be it from flinging a torpedo at your enemies, chucking a barrel that explodes on contact, or maybe throwing a bunch of wheels to a mine on the ground to make the latter explode.

Every level you complete, you’ll be shown a part of the next cosmetic that will be available for you. After clearing three levels, you will be given the opportunity to get the revealed cosmetic by watching a short advertisement video. These cosmetics change the sprite of your hands into something more interesting. It can be a wolf’s paws, a robotic gauntlet, or maybe just a gold ring on your ring finger.

These cosmetics, while not really affecting the gameplay, give the player a chance to customize their character even by just a little bit. They do not give any attack up or defense up stat, but at least these cosmetics will help you kill your enemies in style. Pretty fancy! 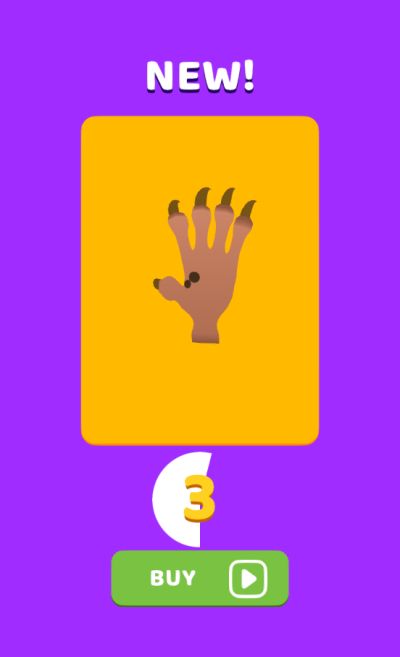 I like what you have done to your nails!

Overall, Voodoo delivered us another game that we can sink our time and teeth in. Force Master is a fun game that will help you burn some idle time. It is a game that requires players to take matters into their own hands, literally. There are many ways to clear each level, making each playthrough different from one another. Different play styles are also encouraged by the game, you can never be always on the offensive and you can never always rely on dodging and block.

If ever you want a mobile game that gives you near godlike telekinetic powers and that surge of happiness whenever you clear a plethora of enemies, we recommend you grabbing Force Master. A game that will keep you glued to your phone as you mention to yourself “I’ll finish one more stage”. Always remember: the force is your ally.