Folding Blocks, a new iOS and Android title from Popcore Games, is an innovative mobile game. With unique gameplay and colorful playing area, you’ll be spending hours trying to beat the system. The goal of this puzzle game is to unfold the blocks, i.e. to double them in size until there are no more empty spaces on the board.

Soon you will realize that the levels in this game are not as easy as they appear. To help you grasp the basics and learn how to play, we prepared a comprehensive list of Folding Blocks cheats, tips and tricks guide. By following these guidelines, you will be connecting the squares with ease. So without further ado, let us unfold our Folding Blocks guide, including some useful tips and strategies.

One of the essential tips we could give you about playing Folding Blocks is to take your time when playing. During the early stages, the game will be easy and simple. As a result, you will feel the need to rush through the levels and complete as many of them as possible. Of course, there is nothing wrong with that. As long as you are managing to pass to the next stage, keep up the good work. 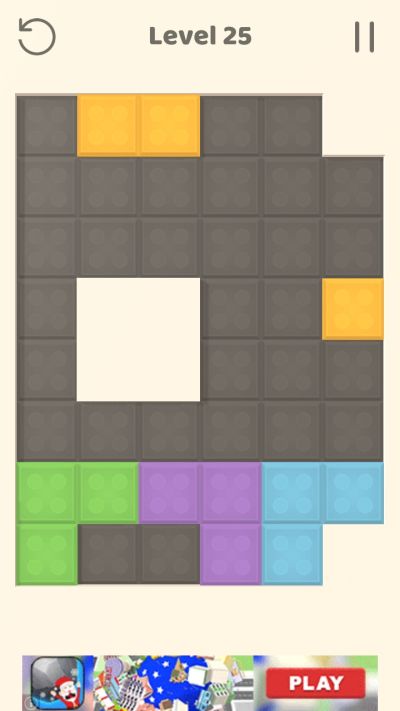 However, Folding Blocks becomes complicated and demanding once you reach level 30 or 40. By that time, you will notice that this game does not feature a timer. In other words, players can plan their course of action for days if they feel like it.

To sum up, we suggest that you devise a plan for every stage. During the gameplay, you will be unfolding the blocks one by one. It is important to create a chronological order of those steps. One wrong move and you’ll have to start the level all over again!

2. Divide The Board Into Segments

Speaking of proper plans, a systematic approach has proved to be the best method for completing the levels in Folding Blocks. After all, the game features 455 different stages. If you want to reach the final one – a good strategy is a must!

What we consider a systematic approach is to divide the playing field into segments. Of course, you have to do this in your mind, i.e. in a virtual way. After that, you can start dealing with the portions of the field one by one. For instance, you first tackle the bottom left corner and then go to inspect the situation in the bottom right one.

By moving from phase to phase, you can unfold the blocks that belong to a certain area without missing any small piece. Later on, we will explain how certain tools can help you prevent mistakes and make corrections when needed. For now, let’s just underline the importance of systematic ‘dealing’ with sectors when unfolding the colorful tiles.

Even though smaller particles can be annoying, finding the right space for the bigger elements is detrimental to your success. Moreover, large clusters of blocks can help you spot the patterns more easily. That is why we also recommend paying attention to those pieces at the start of every new stage.

For instance, if you have a T-shaped fragment placed in the top left corner, you could consider folding it down towards the bottom corner. More often than not, these moves will result in success. In other words, Folding Blocks is a game that relies on patterns a lot. The sooner you learn how the gameplay works – the easier it will be to go over the stages.

So, try to deal with the big shapes first. They have the biggest impact on the situation in the playing field. Once the large chunks are in their proper position, the individual blocks will be easy to deal with.

4. Take A Break If You Get Stuck

Folding Blocks is a great game for practicing your cognitive skills and intelligence. While you play this game, logical thinking will be an integral element of the decision-making process. In other words, you will be constantly pushing your brain to try and solve the puzzles. 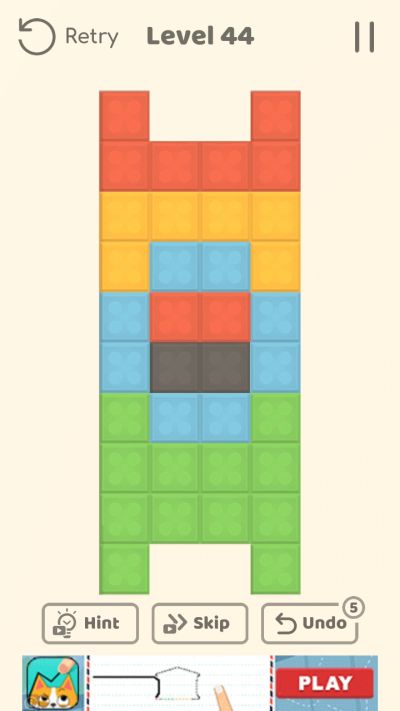 But, sometimes our brains get stuck or they end up in a loop. When that happens, it is best to take a break and shift your focus to something else. Even better, you should try and ‘clear your head’ by engaging in a hobby or some relaxing activity. Folding Blocks is a game that requires constant focus and concentration, but we are not machines or robots.

If you ever get stuck while playing Folding Blocks, we advise you to leave the game and come back later. As we all know, the famous Eureka moments come to us when we least expect them. For instance, you could spend hours looking at the clusters of blocks without seeing the solution. And yet, the answer could appear in front of your eyes while doing something entirely different.

5. Use The Hints Option To Get Help

For those players who do not want to leave the game every so often, Folding Blocks has provided several useful tools. Those tools serve as upgrades and boosts, or as tutorials and guidelines. Either way, you should make the most of them when playing Folding Blocks.

For example, the game provides a convenient tool named Hints. As the name implies, this feature will provide you with tips and tricks on how to beat a certain level. When you press the Hint button, you will see the scheme of colors that you need to unfold. In a way, the game will present you with a master plan of the positions, but it is still up to you to complete the job.

Please note that the Hints option does not come for free. What we mean by this is that you will have to watch an ad if you want to receive the solution to the puzzle.

6. Use Undo To Retrace Your Steps

As you progress through the game, Folding Blocks will increase in difficulty. The levels will become more challenging and more intricate. Consequently, the number of moves per stage will increase as well. You will have to unfold the blocks several times before covering up the entire playing field in the proper manner. 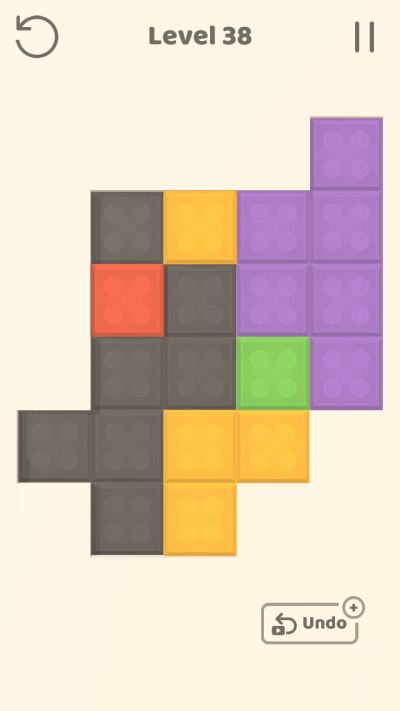 But, the wrong decision can take away all your progress. If you unfold a wrong block, you will fill up the space that is planned for some other element. Luckily, the game allows you to correct your moves. The Undo feature lets you retrace your steps and go back. In other words, the Undo allows the players to go through the history of their moves and make corrections where needed.

Needless to say, the Undo feature also requires that you watch an ad. As a result of spending 20 seconds watching the promotional video, you will have a chance to correct all your mistakes and progress through the next stage.

7. Retry The Level For Free

Among other options, Folding Blocks allows you to play a certain level many times. To clarify, you can have as many attempts at a level as you want. Of course, all the features and tools that are at your disposal should help you overcome the obstacles. But, the Retry button in the top left corner is a constant option when playing the Folding Blocks.

As the name suggests, by tapping on the Retry button, the players will have a chance of starting over. Yes, all the progress will be lost. But, a clean slate is sometimes the best option. Above all, it gives you an opportunity to experiment with the moves and see what works. Once you are out of moves, just hit the Retry button and try a different approach to solving the puzzle.
The Retry feature is available at all times. Moreover, you can use it free of charge, i.e. without watching ad videos.

8. Skip The Level If All Else Fails

The strip of icons below the playing area hides one more useful feature. We saved it for last because you should only use it when all else fails. In a way, this last option feels like giving up, and we know that champions hate to give up. But, the Skip feature lets you reach the final levels more easily. That is why we want to suggest that you use this tool when you are certain that you cannot find the solution for a certain mission. 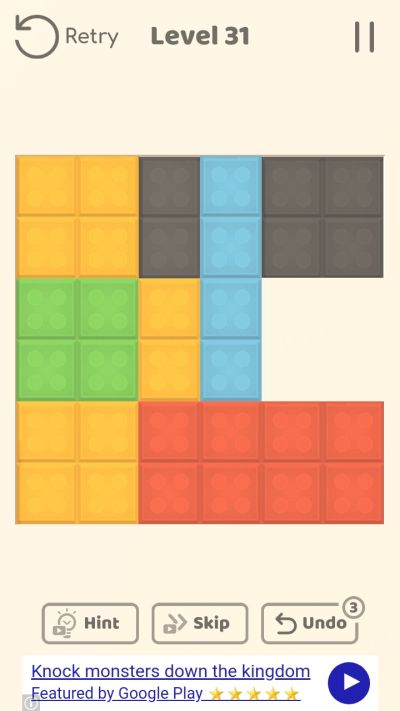 Not all levels in Folding Blocks are the same. Some of them are super-easy while others require a lot of mental stimulation. On top of that, some levels seem to be impossible to go over. If that happens, the Skip feature is a great tool. By watching an ad and pressing this button, the Folding Blocks game will do its magic. In another way, you will be transported onto the next level.

With the final tip on our Folding Blocks guide, we conclude our comprehensive list of the most helpful tips, tricks and strategies. Yet, if you know any other Folding Blocks cheats or hints, don’t hesitate to let us know in the comments!

How long or what do I need to accomplish so I can play the 1% levels?