Have you ever watched Game of Thrones and felt like the Targaryens had it too good? Have you ever wondered what it would be like to have your own dragon and burn through cities, destroying castles, and flaming the flesh off your enemies, leaving only ruins behind?

Thanks to Drag’n’Boom, you can do that without even coming off as a violent tyrant who hates people. But the game goes one step further and instead of letting you own a dragon, it lets you be one yourself! You start off as a rebellious little orange dragon who just wants to burn down everything in its path — people, buildings, more people, more buildings! Along the way, you’ll collect gold and amass a treasure of your own.

The game is pretty simple and easy to learn. There are only two controls. You press on the left half of the screen and swipe in any direction to fly your dragon in that direction. Similarly, you press on the right half of the screen and swipe in the direction you want to shoot your dragon’s weapon (fire, flames, flaming arrows, etc.). The game’s premise? Kill everything that moves.

Drag’n’Boom has multiple levels and all you have to do is collect three stars in each level by getting the maximum possible score. Each level, you get five lives. You lose a life every time you take a hit from an enemy’s attack and the game is over if you have lost all of your lives, meaning you have to start the level all over again. You can also replay a level to try for a better score.

Every few levels later, your dragon will be rewarded with a new power; from more powerful fireballs to even hotter flames, making it even easier to roast the in-game enemies.

In the start, the game might seem a little too simple. All you have to do is keep moving to the right to the end of the level and kill any enemies you might encounter on the way. However, as you move further into the game, you’ll realize how important the movement of your dragon is, with respect to the enemies you meet.

Just keep in mind, you have to continuously move your dragon in order to keep it safe. The worst thing you can do is be stationary, even for a second, as that is enough time for your enemy to hurt you (or take your life).

2. Slide With The Floor

The starting levels are pretty easy. All you have to do is get to the end of the level while collecting all the coins. Even the starting enemies can be easily killed by simply hitting them with your dragon — no flames necessary. So you can simply swipe in alignment with the ground, making your dragon go faster, hitting the little enemies along the way. This also ensures that you collect all the coins that are placed along the way.

As you progress further in the game, you will start to encounter tougher, more lethal enemies. The best way to do this is by flying your dragon high in the air above the enemies and shooting down fireballs continuously. However, do remember to keep your dragon moving here and there so an enemy can’t attack you meanwhile.

From up in the air, not only do you have a higher chance of hitting the little enemies on the ground, but it also keeps you safe from ground attacks. Being in the air will at least give you the upper hand even if it makes it harder to aim while flying.

4. Kill All Enemies To Increase Your Score

Completing a level is really easy, as long as you don’t really care about killing the enemies. But the game uses a star-system, where your score depends on how you have performed at the particular level. Your score in each level depends on a number of factors and killing all enemies is one of them.

Just like killing all your enemies is a necessity to getting three stars, collecting all the coins placed throughout the level is also necessary. There is no time requirement in Drag’n’Boom and the movement is really fluid, so this isn’t really a hard task. Just remember to move around and make sure you collect all the coins. Even if you miss one coin, you’ll have to attempt the level all over again just to get all the stars.

6. Go Crazy With The Fireballs

There is really no restriction on the number of fireballs your dragon can fire, so why not go crazy? Even if you have a bad aim, one of them is likely to hit an enemy. Moreover, enemies don’t really die from one shot, and even if they do, their body jumps around and the game also awards you with extra points for completely finishing them off.

Think three fireballs are enough for a tiny knight? Well, that means you should fire at least ten.

The game is all about getting three stars in a level. It isn’t really a pre-requisite for progressing into the game, but it’s nice to know that you have thoroughly beaten the game.

Here are a few tips for getting all the stars:

Basically, you have to be impeccable throughout the level to ensure three stars. Fortunately, the levels aren’t long themselves so if you think you can do better, just hit retry. The worst you can do is waste a couple of minutes while trying to get a better score. 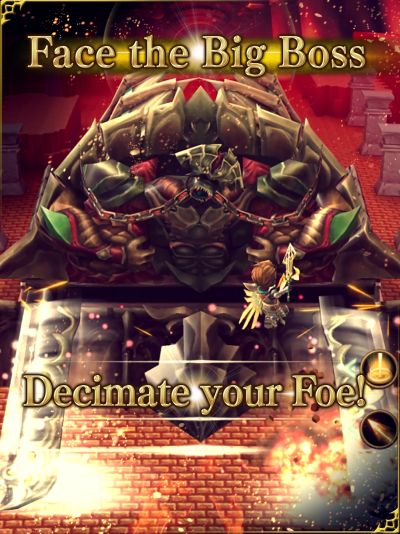