The makers of AdVenture Capitalist are back with a very similar game for iOS device owners, one that offers a twist on the mobile game classic, and a parody of communism to be exact. Yes indeed, the new game is called AdVenture Communist, and in here, you are being invited to become the “glorious leader” of your own Communist state, as you gather more resources, research upgrades, and optimize your production so you can make it up in rank much faster. This game is also an idle clicker, just like its predecessor — that means you don’t need to keep tapping or clicking all the time, and you can let the game work for you as you leave it for some time, earning more currency while you’re away. In short, the game promises to be “everything you’ve ever wanted in a communism simulator.”

Although anyone who’s played an idle clicker, including, but not limited to AdVenture Capitalist, should be familiar with how things work in this game, we’re going to make a bit of a disclaimer — there are several other twists beyond the Communism theme, and a number of new features that set it apart from its capitalist predecessor. So without further ado, let’s go ahead and bring you our list of AdVenture Communist cheats, tips and strategies. We’re here to assist you in earning currency and unlocking new products faster, so read on for 10 of the best tips and tricks we can come up with to help you to that end. 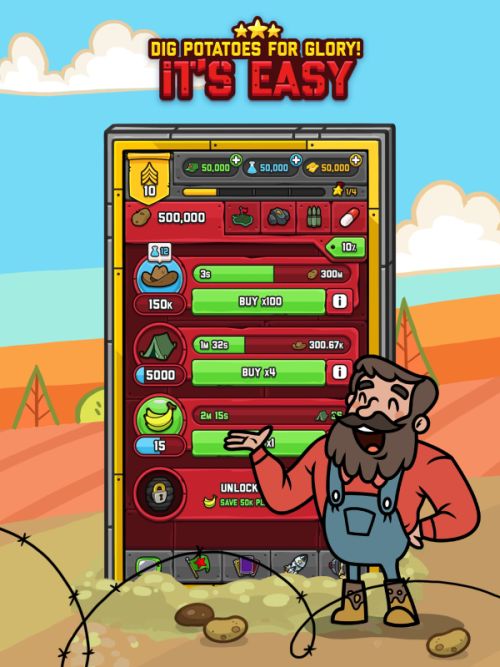 One thing we like about AdVenture Communist is how the game really focuses on the “idle” half of “idle clicker.” The game is so idle, in fact, that you don’t need to do too much clicking. Instead of the game asking you to click to manually earn resources, you can simply tap-and-hold on the green resource button on the bottom right of the screen, and just sit back and relax, keeping your finger on the button until you reach the required resource count in order to purchase your first automated resource. For example, you just need to hold on the green resource button for Potatoes until you reach 100 of them to purchase your first Farmer.

We would recommend that you continue using the green resource button until you’ve purchased enough of the first automated resource (Farmers for the Potato industry, Workers for the Land industry, etc.) that it takes three seconds or less for new resources to be created automatically.

2. Comrades Are Your Main Currency / Basis For Ranking Up 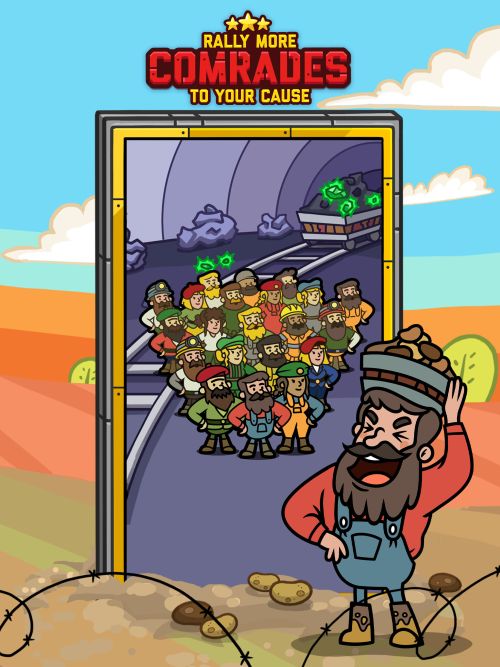 As this is a game called AdVenture Communist, there’s a strong focus on Communist jargon, and that includes the use of “Comrades” as your primary currency in the game, as well as the population of your state, and the basis for ranking up. Comrades are automatically generated by the game, and the number of Comrades that you can earn per second gets increased as your character keeps ranking up, and as you complete more missions. And that actually leads us to our next basic tip in the game.

Missions are like quests you can complete by playing the game normally. For example, the game may ask you to buy a certain number of Potatoes, Farmers, Communes, or Collectives — again, you can achieve these things organically, without any need of special effort on your end. But it pays to look at the missions from time to time by clicking on the main menu button on the lower left of your screen. Select Missions, and you can view each mission and see how close you are to completing them. You can then optimize your purchases to ensure you complete the missions faster, though we believe there’s no real need for that. Completing missions rewards you by increasing the number of Comrades you can earn per second, so make sure you regularly collect those mission rewards once you see a number appear on the main menu button!

4. The Circle Of Life

We aren’t exactly referring to the song from The Lion King, but if you paid attention to the tutorial, you should have noticed a reference to the “circle of life.” By that, the game means that every resource is connected to each other. Taking the example of the Potato industry, Collectives produce Communes, Communes produce Farmers, and Farmers produce Potatoes. With that in mind, you will notice that there are new Communes being created once the Collective progress bar has filled up and reset. Likewise, you’ll see new Farmers being created after the same has happened with the Communes progress bar. But also bear in mind that each time you purchase new resources of any kind, that’s going to come at a price. You can view the price of a resource by clicking on the “i” button on the left side of the “Buy” button.

As you purchase more of a certain resource, you will also see that it will be producing its own resources progressively faster. Again using the Potato industry as an example, buying another Commune would speed up the pace in which Communes create new Farmers.

5. Watch Those Ads For A Boost 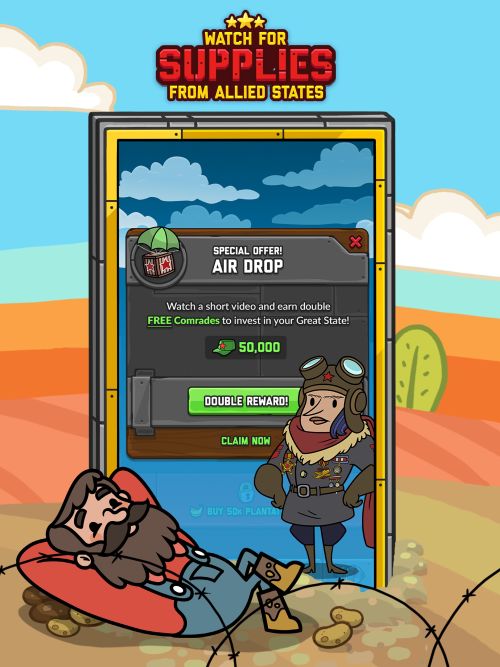 The game will tell you early on in the tutorial that it’s a good idea to watch ad videos. That’s because each ad video you watch could speed up the production rate in any given industry, while offering a few other benefits. On the upper right hand corner of the screen, you’ll see a television icon for the Boost button; tap on the TV and you’ll be given a menu of specific boosts you can receive by watching ads. These allow you to expedite production across the board (for all products) in a certain industry, though the game is generous enough to make the first video you watch cover all industries for a limited period of time.

Aside from speeding up production, advertisement videos also appear if you’ve been away from the game for some time, and want to increase your offline earnings. Make sure you watch that video when the game asks you if you want to watch it, because that will double the amount of Comrades you’ve added to your state while you were away from AdVenture Communist! This is especially useful if you’ve been out for several hours, say, if you last played before going to bed.

6. How Are Medals Different From Missions? 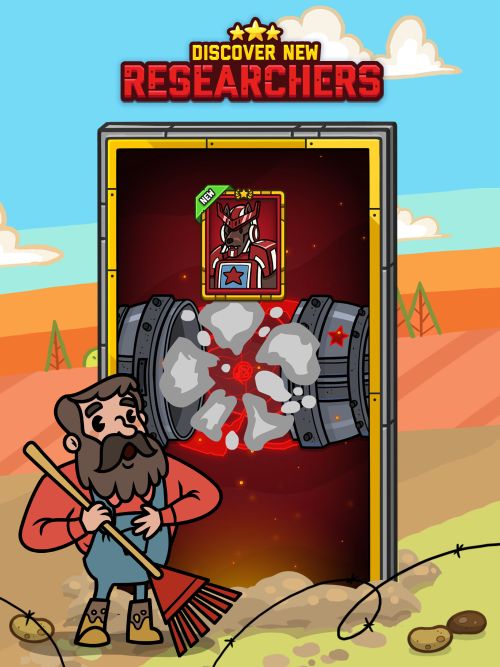 On the main menu, you’ll see an option for Medals right below Missions, and you may notice that these Medals are earned by doing something similar, albeit more intensive. For example, you can earn medals for digging several hundred million Potatoes, recruiting several million Farmers, etc. Again, medals can be earned organically. But they differ from missions mainly because of the rewards you can get, which include earning points for Science research. These points can be invested in technologies that allow for even bigger production boosts, though they may be rather hard to come by.

Research is important because it allows you to study technologies that will carry over to your next play-through even after you’ve prestiged. (We will get to that later, don’t worry!) But we have to observe that it does take a while for the medal requirements to be met. Your patience will be rewarded in the end, as you can get some hard-earned Science points, though if you cannot wait and need a quick fix, you have the option to spend real money buy any one of several packages in the in-game store, with these packages including a generous amount of Science points.

7. How To Spend Your Science Points 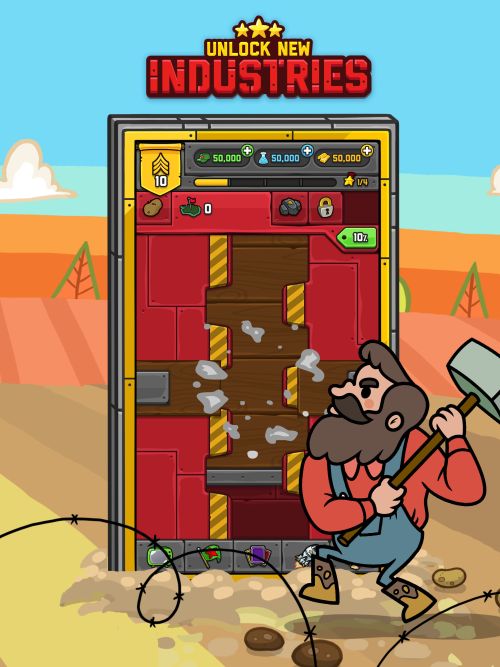 When it comes to spending your science points, you may be tempted to spend them the moment you see something worth boosting. But since the amount of points needed to boost a resource’s production speed goes up from one business to the next, we would recommend that you save up those science points for the higher-end businesses, e.g. the Weapons and Medicine industries, as opposed to those like the Potato industry, where it’s so easy to quickly earn more of a certain resource. You don’t want to deal with an interminable wait as you try to earn enough of one resource to unlock another, right? That’s something you’ll be dealing with in the later stages of your play-through, and something that can be addressed by spending your science points wisely.

8. Make Use Of The Percentage Options

See the bar on the bottom of the screen with the “X1, 10%, 50%,100%”? This is a staple of most idle clicker games, but we’re going to talk you through this feature nonetheless. Choosing x1, which is the default, means you can only buy one unit of a certain resource at a time. Likewise, the other options represent 10 percent, 50 percent, and 100 percent of the maximum number of units you can buy at a time.

In most cases, the 50% and 100% options are the best ones to choose, as they save you all the effort of tapping repeatedly on the Buy button for any given resource. But sometimes, you may have to space things out, particularly in those situations where you can only buy so much of a certain resource, in order to allocate it better toward the other resources it is dependent on. That would mean starting out at 100 percent, then working your way down to x1 so you can be sure you’re only purchasing what you need at that given time. 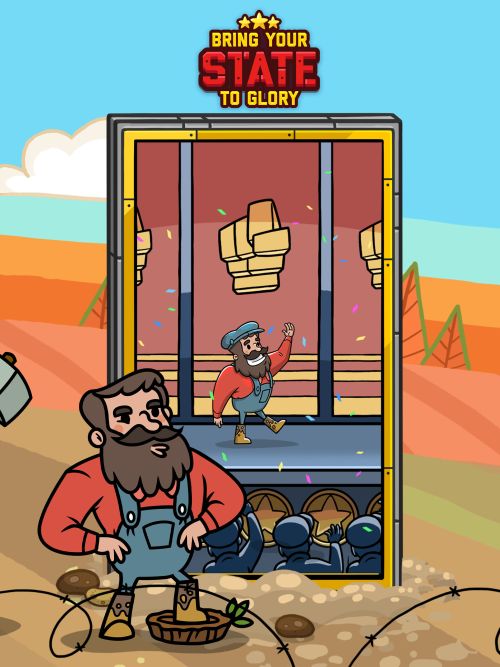 AdVenture Communist has premium currency in the form of gold bars. You can use this currency in the shop, where you can buy a number of special power-ups that could exponentially increase the speed in which resources are earned. For example, Button Auto-Tap, which automatically taps the big green resource buttons for you, is worth 25 gold, while Proper-Ganda (all resources are produced 5x faster) is worth 150 gold.

As far as we’ve observed, there are two ways to earn gold in the game. The first way would be to go to the shop and purchase the starter package (gold and a few power-ups) or any one of the many gold bar-only bundles. Generally speaking, you get better value for your money if you purchase the more expensive gold packages, though it’s still best to buy something in the midrange price point at most, should you decide to part with your real-world cash.

The second way to earn gold is to click on the gold bar button on the top right corner of your screen. That’s going to pull up an offer wall, but if you ask us, we often have negative experiences when dealing with offer walls, such as the ones from Tapjoy. Your mileage may vary in this area, however, and we’re sure you can agree that being able to complete multiple offers for free is always better than spending real money to buy premium currency for a mobile game.

Prestiging, as it always is in idle clicker games, refers to the process of resetting your game and starting from the very beginning, albeit with a few perks to help make your next play-through faster than the last one. In AdVenture Communist, you will be able to benefit from “advanced science” once you prestige, as well as greater amounts of science points awarded via medals. Since science is so important in helping you unlock new resources or purchase existing ones faster, the best time to prestige would be when you’ve hit the proverbial ceiling, and are progressing toward unlocking new resources at a glacial, super-slow pace. Of course, you’ll need to bear in mind as well that you can only prestige once you’ve acquired 10 medals!