You can’t blame Disney for releasing quite a few Match 3 games based on its popular characters. Match 3 is, after all, one of the simplest genres in gaming, simple enough to attract non-gamers to mobile titles, yet more complex than the “easy to learn, hard to master” titles Ketchapp does so well and so frequently. That said, the latest such Match 3 puzzle from Disney is called Disney Emoji Blitz, and like most of its titles, you can now get it on your Android or iOS device.

You can play fast-paced rounds of Match 3 puzzles to earn prizes, complete missions, and collect more emojis, including those from The Lion King, The Little Mermaid, Cinderella and other Disney classics, and those from newer films such as Finding Dory and the Toy Story series. All in all, there are 400 Disney and Pixar emoji characters and items to collect, and various super powers and combos to unleash by matching more than three pieces.

That sums up the game, but what about playing it? Most people know the basic mechanics of Match 3, but each of the major titles in that genre have something special that makes them stand out in terms of gameplay. So read on, as we present to you our list of Disney Emoji Blitz tips, tricks and cheats that can help you in your quest to collect more of your favorite Disney characters and items.

1. Speed Is The Name Of The Game

Most Match 3 games will allow you to, and encourage you to take your sweet time and carefully plan out every move so that you have the best chances of completing a level with three stars. Not Disney Emoji Blitz, though, as it is as fast-paced as it sounds. It’s all about speed here, and you can, in fact, make new moves while the pieces are dropping and combos are being strung together by the natural arrival of new pieces. 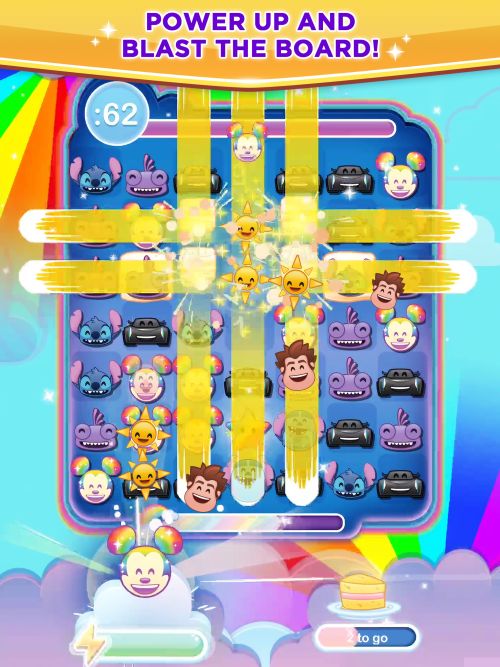 This game will encourage you to think, think, and think at all times, regardless of how fast things are going, so you’ll want to start practice making moves on the fly as early on as possible; look at the right after matching in the left, and vice versa. More speed means less time and a higher score, so forget one of the most basic and common rules of Match 3 gaming as far as this game goes – if you snooze, you lose!

2. Make Your Matches From The Bottom

Fortunately for Match 3 purists who may be having a hard time dealing with the fast-and-furious mechanic, Disney has kept another longtime standby rule in the mechanics of Disney Emoji Blitz. Like you have to do in most previous Match 3 games, you’ll want to work from the bottom moving up, as that’s going to give you a better chance to collect items and gems, and string together combos as new pieces fall into place.

3. Don’t Pay Much Attention To The Items 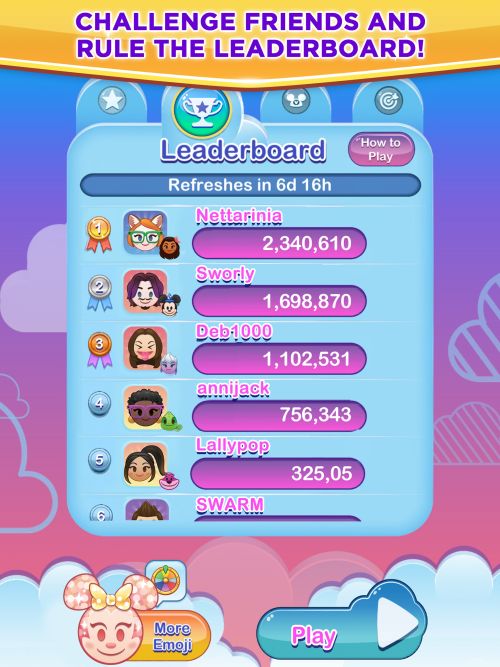 The game will allow you to collect a variety of Disney items, and this would take place once the items drop to the lower portion of your screen. But don’t make moves to make them drop down, while neglecting the moves you need to do to make things go faster and to string combos together. The items can be collected in the natural progression of the game, which means you should focus on your matches, and not play with the specific purpose of collecting items. Otherwise, you’ll end up wasting precious time which is, as we explained above, of the essence.

4. When Should You Use Your Super Powers?

The special emoji get unlocked at random as you collect and open more chests, as opposed to getting unlocked in order. Now many would say it won’t make much of a difference what emoji you prefer, as all of them are at least solid, and can be helpful as you try solving more puzzles. Use those “super powers” as soon as you activate them, as that’s going to help you get familiar with the powers, and maximize their capabilities. Just test as many of them out as possible, until you find a super power that fits your play style perfectly.

Want to unlock more emojis which you can use on your keyboard? (Bonus tip – do this by allowing access to Disney Emoji Blitz, doing a tap-and-hold on the earth icon on your keyboard settings, and selecting the game.) There’s the puzzles, of course, which you have to complete as quickly as possible. Aside from that, you’ve also got missions, which you should complete as soon as possible to unlock new ones. Complete as many as you could so that you can earn more coins and other rewards.

That’s all for now, as far as our list of tips and tricks for Disney Emoji Blitz is concerned. Do you know other hints for the game that we should add to this list? Feel free to let us know by commenting below!