Charlie’s Angels: The Game is the latest mobile game from the highly acclaimed studio TabTale. This game follows in the footsteps of TabTale’s previous excellent releases. Those releases include the Cheating Tom series, DIY Fashion Star and Fashion Tycoon to name a few. It goes without saying that you will have a lot of fun if you download either one of those games to your iOS or Android device.

1. Get Familiar With The Controls

Learning the controls in Charlie’s Angels: The Game is quite easy as there is a well-constructed tutorial at the beginning of the game. This tutorial will show you how to jump, shoot and do many other acrobatic moves. Learning from this tutorial is essential in achieving high scores in the early stages. Of course, later on, you will have to master some advanced tricks and moves. 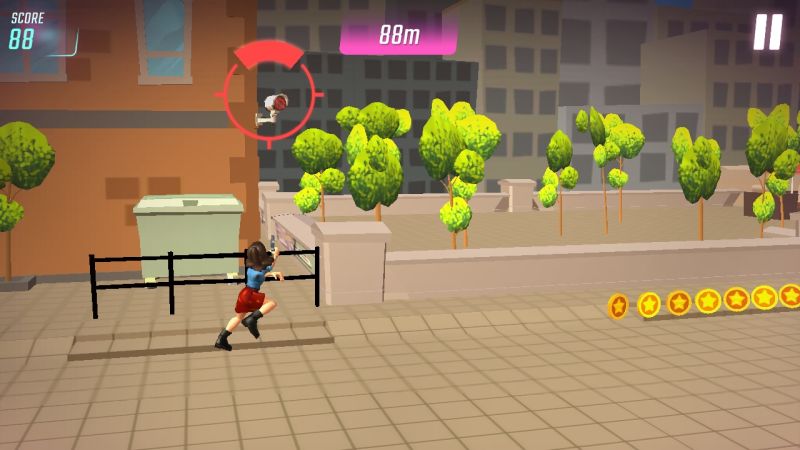 The difficulty of the game increases as you make progress. This is why you have to learn how to adapt to various situations. For instance, the left bottom part of the screen holds the key for jumping. Whenever you notice an obstacle in front of you – tap on the screen. Moreover, double-tap will make the angel do a midair flip, prolonging the jump. The right-hand side handles the shooting, so tap on the right whenever you see a camera or an enemy agent.

The beginning of Charlie’s Angels: The Game is quite straightforward as you have only one character you can play with. The ‘starting’ character named Elena carries a gun that will help you eliminate enemy agents at these early stages. Level her up and you will gain bonus damage which will increase your score. Gaining high scores will allow you to unlock other characters. In fact, some of them are available for unlocking from the very start of the game, as long as you are able to splash the cash. 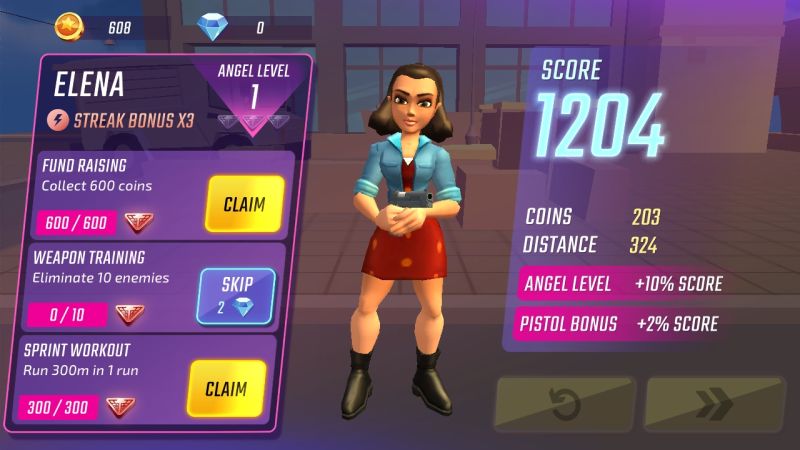 From Elena to Jane, every agent is unique. This means that they have advantages and disadvantages. For example, the red-haired Chiara can bring you extra points for coin streaks. Or, if you into battle with Erika as your avatar, you start with a free shield. Likewise, the attractive blond named Sabina will reward you with a 20%-coin bonus. So, unlock as many angels as you can, you will not regret it!

The quality of the performance will affect the number of rewards you get. Maxing out stages is a must for those that want to complete everything with flying colors. Charlie’s Angels: The Game won’t punish players that fail, but it will punish those that don’t even try. Every attempt at a stage will offer lots of coins, which are great for leveling up characters and unlocking upgrades. In other words, every run you make will bring some sort of reward.

But ambitious players will not be happy with ‘trying’. So, if you want to win, we have some good news. The trick is in playing with new agents at stages where you failed because the new girls might have the skills needed to achieve what was once impossible. Also, it is imperative to learn the layout of every level. As a result, the completion rate will increase. Stay at one level for as long as necessary, as the time spent will be turned into the experience you need to progress.

4. Earn As Many Coins As Possible

Grinding old stages with new agents is the best way to earn experience and coins. Focusing on one character may have its perks, but it might get boring to play the same avatar for a long time. So, change them up a bit to try and collect even more gold. But why are the coins so important? Allow us to explain. 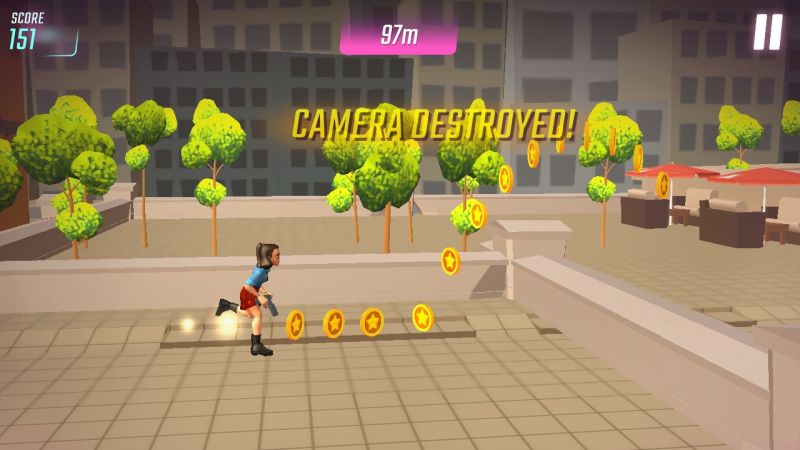 The gold you earn will go into the treasury, and the game will let you amass a decent wealth. Well, you will need it if you want to unlock all the possible upgrades and characters. For instance, to unlock Jane, you will need 7.500 coins! Likewise, different types of power-ups and weapons require certain amounts of gold. Therefore, don’t be lazy and jump every time you see a bunch of coins floating around. Also, you will receive a briefcase full of gold every time you level up an agent, so don’t miss out on this opportunity.

5. Maximize The Gains With Combos

Charlie’s Angels: The Game rewards players who are willing to be heroic and do great things during missions. If you manage to do well on a stage, you will earn combos that multiply the number of points. Continue doing this in a timely manner and the rewards will be enormous.

Getting these combo bonuses isn’t as easy as it might seem. One second of a delay between your actions may stop the combo meter. This could make things a bit difficult for beginners. Yet, if you follow our tips and tricks, the scores you could only dream about will be within reach. Becoming familiar with your angels and knowing their skills will also increase the quality of combos. So, don’t forget to learn about their specialties. And, it goes without saying that you should level them up as soon as you get the chance.

6. Complete Missions and Achievements To Increase Your Score

Every mission you start will contain objectives you can finish to claim extra rewards. These can range from the number of enemies killed to how long the coin collection streak is. Fulfilling all objectives in a mission will propel your score. Needless to say, this will reflect on the number of upgrades you will be able to unlock after completing the missions.

You can find the objectives for the missions on the lobby page. To be clear, the objectives are quite demanding and it might take you several attempts to claim the rewards. You should always look for objectives that are easy to complete and offer lucrative rewards. After all, the more gold you collect – the better your next attempt will be if you spend the coins wisely.

In a way, this game rewards persistence and effort. Yet, quality tools can make the process easier and more effective. Thus, we recommend that you splash the cash on power-ups and weapons. You will find these sections on the left-hand side of the main menu. Once you unlock them, a whole new world will open up and Charlie’s Angels: The Game will become much more enjoyable. 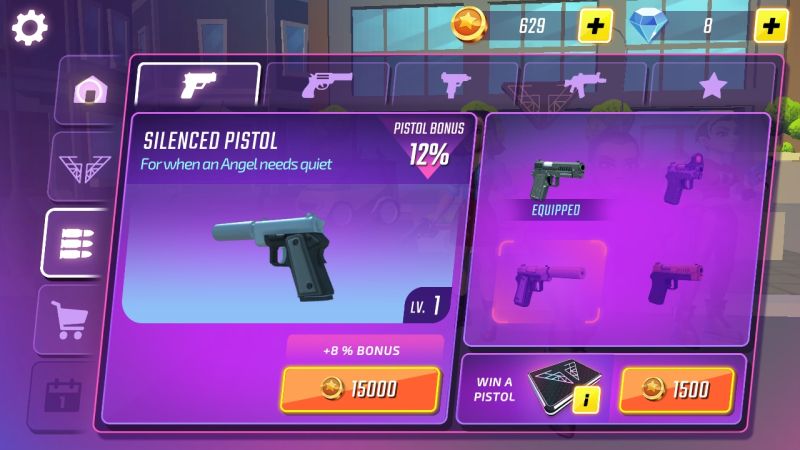 The magnet, the shield, and the multiplier are the first three boosters you will be able to unlock. Investing the coins in these power-ups will boost your results, in more ways than one. To be honest, the magnet will come free of charge, and this booster will allow the angel to collect a lot of coins. Likewise, all those other power-ups can be highly useful. At the same time, you should invest some cash in enhancing the quality of your weapons. Luckily, the game offers a wide range of guns and pistols.

One of the most frustrating things when playing this game will happen when an obstacle appears in your way out of nowhere. Of course, sometimes you will fail to react in a split-second, and the angel will crash into the obstacle. For example, cars and trucks will often stand in the way. But the city is full of barrels, balconies, or park benches. Any of those objects can affect your score. Better said, they can end your run and force you to go back to the beginning. 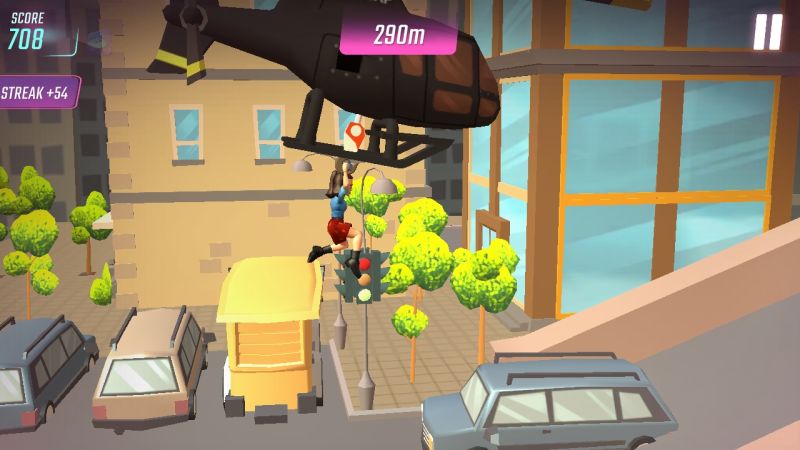 However, Charlie’s Angels: The Game will allow you to continue from the place where you’ve made a mistake as long as you watch an ad. In other words, you can save your progress and even earn more coins if you ‘invest’ 20 seconds of your time. Since this seems like a fair deal, we recommend using this option at every opportunity. Moreover, the scenes where the angel is flying through the air holding onto a helicopter are something you should never miss. Yet, don’t stare too much and be ready to react as soon as the helicopter drops off the girl.

There you have it! An in-depth Charlie’s Angels: The Game tips, cheats and tricks guide. Nonetheless, if you think some other strategies should also be a part of this guide, don’t hesitate to drop us a line in the comments!