Call of Duty: Mobile is a great FPS game published by Activision for iOS and Android devices, which quickly became a smash hit soon after release due to a multitude of factors, but the most glaring reason is that the game is very fun to play.

If you are just starting out in the game, we recommend taking a look at our Call of Duty: Mobile beginner’s guide. Now, this new guide aims at helping out more experienced players hone their gameplay even further and climb the ranks up to the upper echelons of the competition. So without further ado, let’s delve into this Call of Duty: Mobile advanced guide, as we share with you a bunch of tips, tricks and strategies to take down your enemies effectively.

1. Get Used To The Advanced Aiming Mode

In Call of Duty: Mobile there are two different aiming modes: Simple and Advanced. In Simple aiming mode, the game will shoot automatically when an enemy is in your crosshair, whereas in Advanced you have full control of your aim and shooting. Simple mode is great when you are new to the game, as it allows you to focus on the other aspects of the game, such as getting used to the controls and the maps, but once you are comfortable with them you should switch to Advanced mode, so that you have full control of how you approach fights. 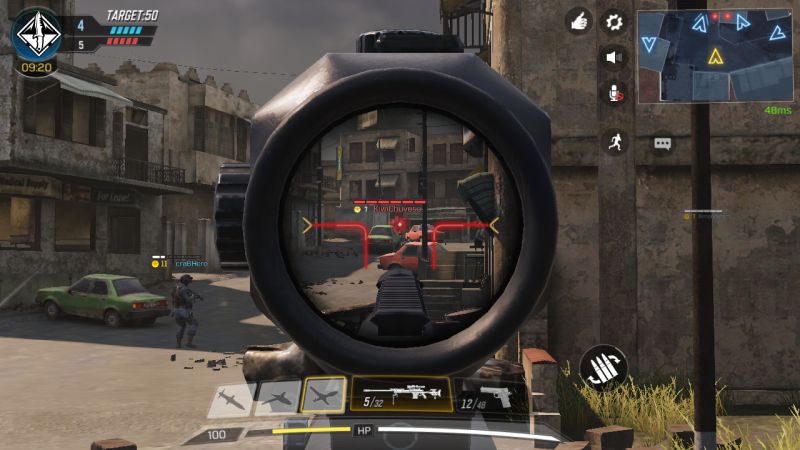 Advanced mode helps you being more deadly as well as using your bullets better. The issues with simple mode are glaring when you use a sniper rifle such as the DL Q33: very often you will see your character shoot bullets that had no chance of hitting the target, wasting time, bullets, and potentially costing you your life.

Moving and aiming is hard on a phone, so getting used to Advanced mode is going to take a while, but it is absolutely worth it, as it makes you much deadlier in combat. You can get kills quicker and with less bullets.

2. Master Sliding To Outmaneuver Your Opponents

Another feature that’s hard to use is sliding. To slide you need to be running and then press the crouch button. Sliding is very useful when you want to surprise people behind a corner or a wall, as they won’t be ready to hit you, since usually they will be aiming much higher than your current position. You can also use sliding to reach cover more safely than just by running.

Especially now that the game is still new, very few people are abusing the sliding mechanic, so using it is going to give you a huge advantage compared to someone who doesn’t use it. It is unexpected and effective.

There are 3 different categories of perks you can use in your loadout: Red, Green, and Blue. You unlock them by leveling up your account, and you can run one of each category.

Here is a list of the red perks and at what level you unlock them:

Fast Recover (level 6): increase HP recovery rate by 35%
Persistence (level 14): scorestreak progression does not reset on death, but scorestreak cost are doubled
Lightweight (level 20): you sprint faster and take less damage when falling
Agile (level 30): you switch between weapons fast and also aim faster when you aim after sprinting
Flak Jacket (level 39): reduces the damage you take from explosions by 35%
Skulker (level 45): You move faster while you are crouching and walking

The green perks are the following:

Vulture (level 12): you pick up ammo from the dead bodies of your enemies
Toughness (level 16): you flinch less when taking damage
Tracker (level 24): you can see enemy footprints
Cold-Blooded(level 32): you can not get hit by AI-controlled scorestreak gadgets (you can still get it by gadgets controlled by a human player)
Hard Wired(level 41): you become immune to various scorestreak gadgets, and also become harder to track through perks
Ghost (level 47): your position cannot be revealed by enemy UAVs

Lastly, here are the blue perks:

Hardline (level 13): you earn more points
Demo Expert (level 20): your explosive deal extra damage
Dead Silence (level 27): your footsteps don’t make noise
Engineer (level 37): you can see the scorestreak and what equipment your opponents are bringing with them, you can also set up a booby trap on enemy Care Packages
Tactical Mask (level 43): enemy tactical equipment is less effective on you
Alert (level 51): you hear enemy footsteps more clearly

As for which ones to pick, it depends on your playstyle. If you are more of the sneaky type who likes to get behind enemy lines and provide support fire from a flank, consider running Skulker + Ghost + Dead Silence, while if you find yourself in the thick of the action you could pick Hard Wired + Tactical Mask + Flak Jacket.

Try out different combinations and see which one you like the most.

In some modes, as soon as you spawn, you are invincible for some seconds, which means you don’t take damage from enemy shots. This is very useful especially in Frontline, where someone might get to your spawn-point and do a massacre. Great defensive utility, but you can use it offensively on some maps, especially in the smaller ones like Killhouse. 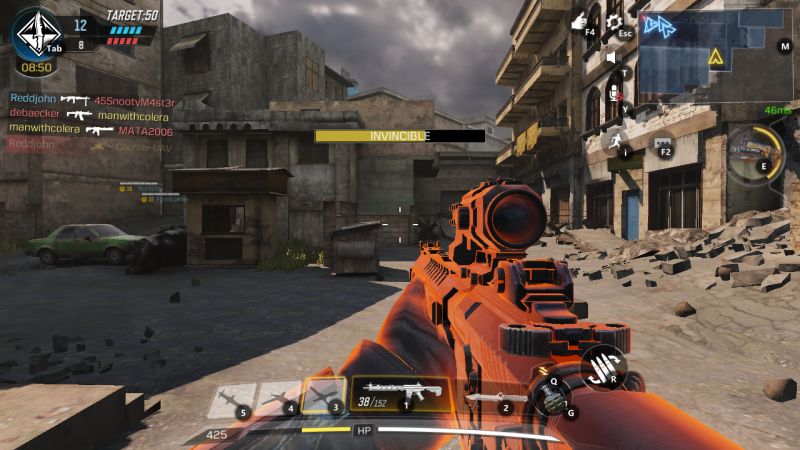 Spawn and run right in front of your enemies, if you have been quick, you will still have a couple seconds of invincibility left, this will allow you to shoot without any way of getting punished.
Naturally, you can’t always do this, it only works in smaller maps and only in modes like Team Deathmatch or Frontline.

Conversely, be careful of invincibility when you are running through the enemy spawn points, as you won’t be able to kill them at all when they just spawn, you are better off running away and hiding for a couple seconds, just enough for their invincibility to fade away.

5. Try To Get Scorestreaks

Scorestreaks are important in Call of Duty: Mobile, because they unlock extra gadgets for you to get even more kills. To get scorestreaks simply get points without dying. This is where perks such as Persistence and Hardline come into play: they make earning these gadets easier, and considering how powerful some of these gadgets are, they are always extremely helpful.

Right after you download the game you only have access to 3 of them, but by progressing through the levels you will unlock many more. You can see what scorestreak gadgets you have unlocked so far and pick which ones you’d like to bring to the battlefield from the main menu, by tapping on the “scorestreak” button right above the “loadout” one.

The 3 gadgets you start with are the UAV, which reveals the position of all enemies without the Ghost perk on the minimap, the Hunter Kill Drone, a drone you deploy yourself that seeks out an enemy soldier or vehicle and blow them up, and the Predator Missile, a remote-controlled missile that will explode on contact with a hard surface. 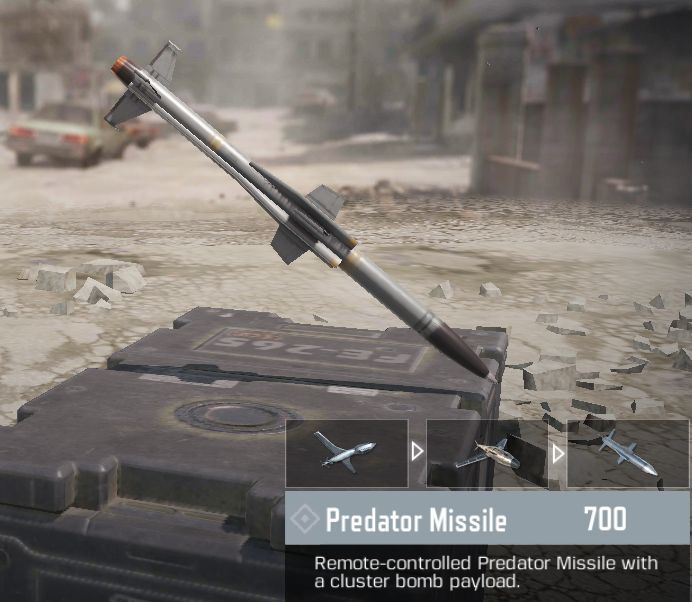 To get the UAV you need to get 400 points in a streak, the Hunter Killer Drone requires you to earn 500 points, and the Predator Missile 700. You can unlock additional scorestreak gadgets by leveling up your account. Airdrop simply calls a care package with loot in it (very useful in the Battle Royale game-mode, less so in regular games), Counter-UAV removes the minimap from your opponents’ screens, effectively rendering enemy UAVs useless. The SAM Turret is a turret that automatically locks onto enemy aircraft scorestreak gadgets and shoots them down; very useful against Hunter Kill Drones and Stealth Choppers. Sentry Gun works like the SAM Turret, except instead of focusing on aerial enemy units, it automatically locks on enemy soldiers.

Stealth Helicopter seems a bit broken to me right now, when you use it a stealth helicopter is deployed, which will automatically fire and kill multiple enemies from above. Generally speaking it gets about 5 to 6 kills every time you use it, which is insane when you think about it. It requires a scorestreak of 1000 to be used, so at least it’s not that easy to get, but when you do you give a massive score boost to your team. 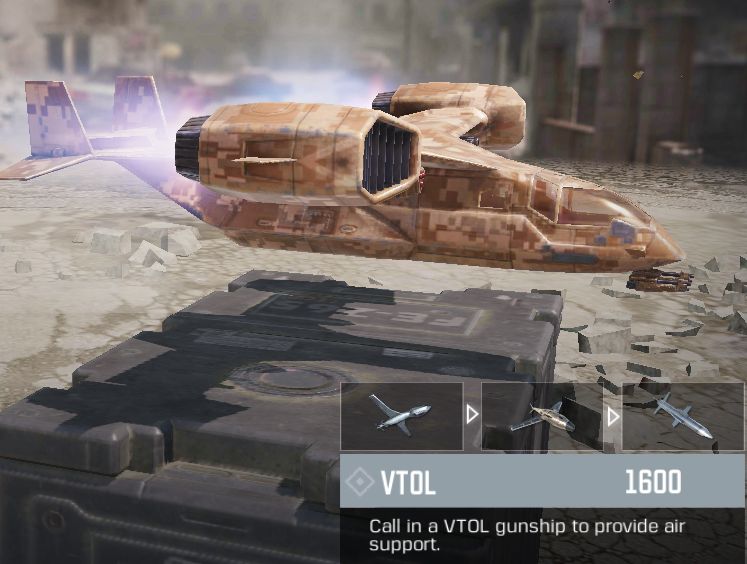 The last scorestreak gadget you unlock is at level 54 and it is the VTOL, which requires you to get a streak of 1600 points before you can use it, which is super hard, but absolutely worth it. VTOL deploys an aircraft unit that you fully control, you can move it around and shoot with it. It fires rockets, and it’s very easy to get over 10 kills with it, should you unlock it.

There is another gadget that is hidden: the tactical nuke, to get it you have to get 20 kills without dying in a game, and then you will have access to it. It is not very tactical if you ask me, but I digress. It is a massive nuke that is going to erase the enemy team and get you multiple kills. Be careful as it will also blow up cars and other inflammable objects around you, so stay away from those or you will end up blowing up yourself.

You can start playing ranked once you reach level 10 in Call of Duty: Mobile. Everyone starts from the Rookie rank and has to work their way up until the Legendary tier. Here are the ranks:

Every tier except Legendary has 5 categories in it, so you can be for example Veteran I, II, III, IV, or V. To reach the Legendary tier you have to be among the 10 best players of your server. Everyone starts from 1 point and then has to reach a certain number of points to progress through the next rank, for example to reach the Master I rank you will need to reach 3000 points. As you can imagine, since you start from 1, it’s not exactly easy nor quick to reach that level, but that’s why they are called Masters in the first place. 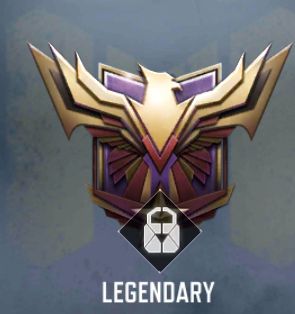 Don’t get discouraged though, earning points is easy. The points you gain are calculated at the end of each match, based on your performance. Winning or losing doesn’t seem to influence how the score is calculated, so don’t worry too much about your teammates (although you should always work together with them through communication and voice chat if you want to earn even more points). At low ranks even bad performances won’t end up costing you too much, but the higher your rank is, the more your poor performance is going to influence how many points you lose at the end of the game, so you should always try your best even if the game feels hopeless.

This concludes our advanced guide to Call of Duty: Mobile. The game is very fun and you can play it as much as you want, and it is hard sometimes to say “no” to one more game before going back to our daily lives. Seeing the legendary maps from the Modern Warfare series of the franchise also brought a touch of nostalgia to the title. Overall, this is a great game that’s also very deep considered it’s on mobile. There are a lot of weapons, perks, attachments, gadgets, and even gamemodes that will keep us glued to our phones’ screens for a long time. Let us know in the comments if you have found out about other cool tricks or tips, until then, happy warring!