If you’ve ever been thrown into the air by your parents or relatives, you know how fun and exciting this activity can be. Buddy Toss, a mobile game created by CurryGames, is a virtual replica of that same child’s play. The game is available for iOS and Android devices, and there is no doubt that Buddy Toss will provide you with endless entertainment.

Having said that, this game features innovative and unorthodox gameplay. That is why a lot of players need a little bit of assistance when tossing their buddies for the first time. Luckily, our Buddy Toss tips, cheats and tricks guide will help you launch your friend to the galaxy. So, let’s see what it takes to make the highest possible toss.

Buddy Toss is an addictive mobile game. With colorful graphics and entertaining gameplay – you will spend hours soaring through the sky. On top of all that, the game provides players with two distinct playing modes – Standard and Story. Both of these can be fun and enjoyable if you know what you should be doing. That is why our in-depth Buddy Toss guide is here, to help you with everything you need. 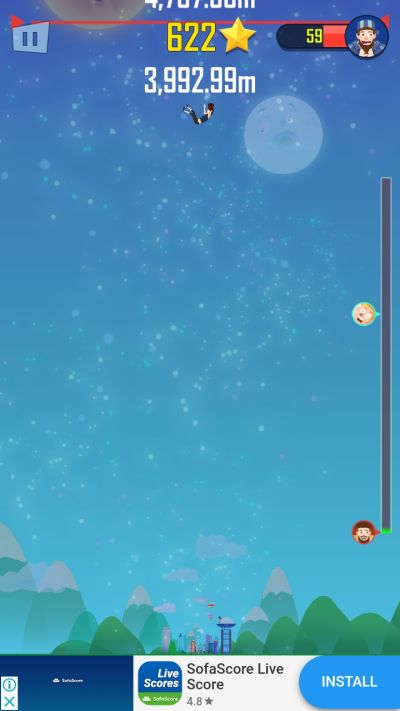 The Standard mode is easy to access. You just need to tap the center of the screen in the lobby. The goal of the game in this mode is to make the highest possible toss. But, the number of attempts is limited, and it directly depends on the available energy. Also, your strength and skills play a part in every toss.

When it comes to the Story mode, the mechanics of the throws are the same. Yet, you will have additional tasks while flying through the air. Depending on the story, your flying buddy could catch objects midair, or he could shoot down unwanted aliens and their ships.

2. Time Your Moves To Perfection

As we already mentioned, the mechanics of the gameplay in Buddy Toss require some time to get used to. In fact, the concept is pretty simple – tap the screen to toss your buddy. But, the timing of your moves is crucial, and a lot of players may struggle with this element at first. That is why we are here, to make it easier for you to grasp the basics. 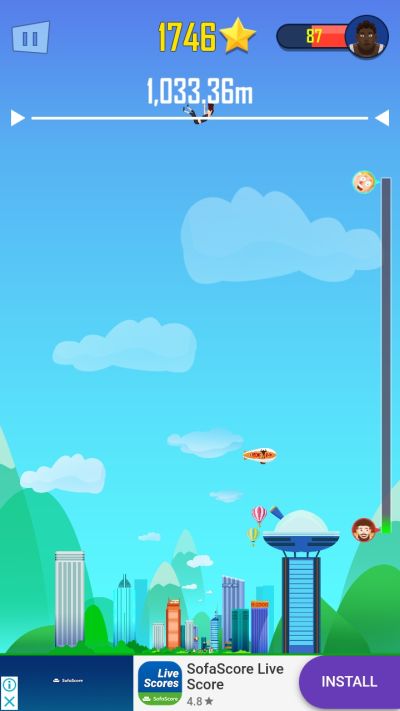 Also, the gravity is your enemy at Buddy Toss. The longer your friend travels down towards the ground – the more velocity her or she will develop. As you could assume, falling down from high altitude is a risky endeavor. You have to be on your best at all times if you don’t want the flying buddy to become a pancake on the ground in front of you.

3. Pay Attention To The Energy Level

Tossing your friend into the air can be an activity that can go for hours, but we all get tired sooner or later. The same happens in the Buddy Toss, i.e. your energy levels are depleted after a certain number of throws. That is why it is important to have a plan of action and strategize your moves when playing this game.

The gauge in the top right corner of the screen is the energy bar. Once you make a toss, a small part of the energy is consumed. At the early stages of the game, the players will be able to make up to 10 tosses until their energy runs out. But, boosters and upgrades can improve their stamina. We will elaborate more on the use of boosters in the upcoming chapter.

For now, let’s just remind you to always keep an eye on the energy gauge in the corner. Plan your moves accordingly and never let the stamina run out without making the highest possible toss.

Speaking of upgrades, Buddy Toss offers you two ways to improve your results. Aside from improving your throwing skills, which comes with practice, there are two distinct types of upgrades. The players can choose between Power and Size when investing in buffs for their character. Both of these enhancements can play a big role during the gameplay, and that is why players should invest the available funds. 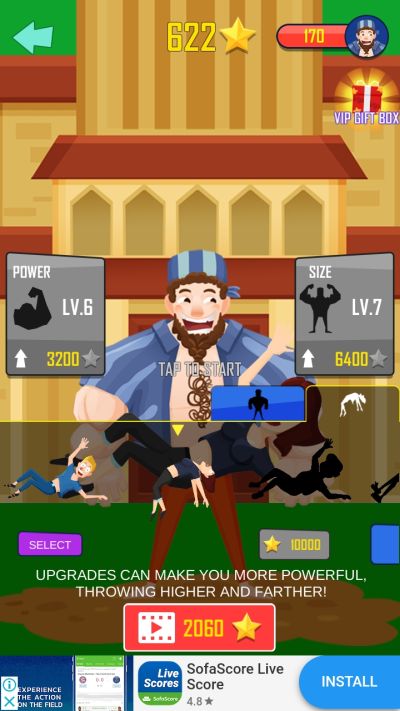 Stars are the in-game currency in Buddy Toss, and they are awarded after every tossing session. Of course, high score results will reward you with the biggest loot. The best way to invest those stars is by going to the Lobby screen and selecting one or more of the upgrades.

By investing in Power, your character will become more potent in terms of tossing the friend. Similarly, investments in Size will help your champion put on some muscle mass, making him more capable of reaching spectacular heights with the throws.

5. Change The Looks Of The Characters

When it comes to the characters in Buddy Toss, some other changes are possible as well. However, those other changes are mostly cosmetic. What we mean by this is that you can buy new skins for the throwing bro, as well as his flying sidekick. Both of the characters can receive a complete makeover, creating the game more enjoyable and entertaining. 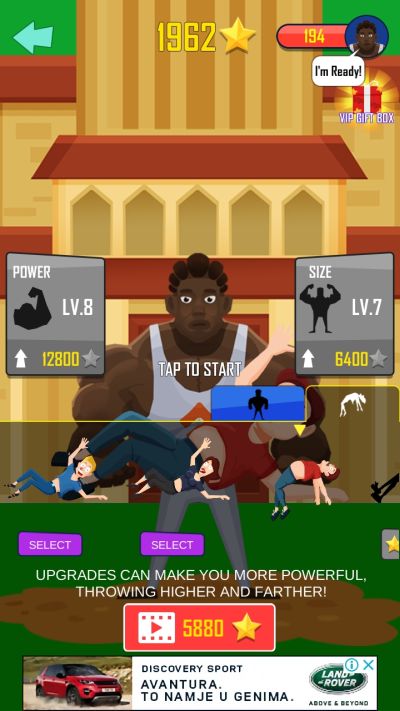 In the Lobby, the lower half of the screen is dedicated to those cosmetic modifications. Once again, two sections are available. The first section lets you choose a new skin for the big guy who makes the toss. New skins require money, i.e. the stars, to be unlocked.

The second section is reserved for the character soaring through the air. Again, you will need to invest some of your in-game currency to unlock a new skin. But, the range of available options will certainly make the gameplay more colorful.

As you could notice, the stars are a valuable commodity in Buddy Toss. Even though you can acquire a bunch of stars after a successful tossing session, there will never be enough money in your account. That is why we want to provide you with a useful tip on how to grab a big bag of stars in a flash, hassle-free.

Actually, the game itself offers you a bunch of stars free of charge. Since we all love free stuff, such an incentive is more than welcome. Yet, not all players will use this present, even though the goodies are up for grabs. Why? Because the requirement for this bonus is to watch an ad. By spending twenty seconds of your life, you can earn a massive amount of stars. It seems like a fair deal. That is why we urge the players to visit this section from time to time and to invest those precious few seconds of their day to watch a video.

After you collect the prize, you can spend the money on upgrades. Once your character’s strength and size improve, every toss will generate more stars than ever before.

7. Tap To Steal The Items

The final two tips on our Buddy Toss guide will be related to the activities you need to perform while playing the Story mode. As we said earlier, the Story mode is one of the two playing systems in the game. We recommend that you try out the Story mode because it offers a storyline that will encourage you to make the highest possible throws. 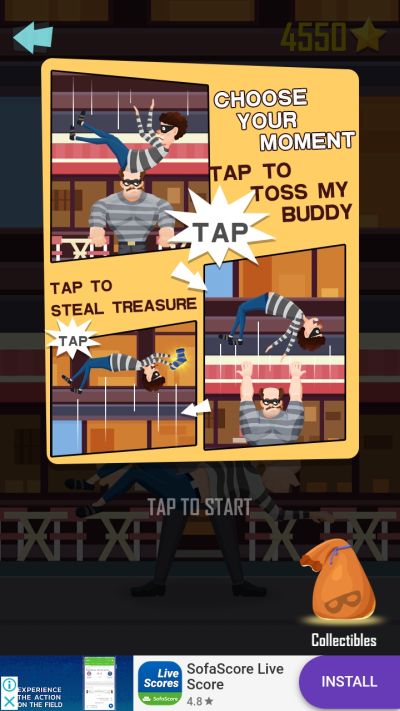 The first story follows two robbers that are trying to steal as many precious objects as they can. Your task is to help them collect the valuables without getting caught. Also, you want to avoid not catching your buddy as he flies towards the pavement!

The higher you toss your sidekick, the more items he can collect. As he flies through the air, you need to tap the screen at the right moment to bag the item. Remember that you can only grab the objects as you are flying up, not downwards.

8. Shoot The UFO And Save The Sheep

The other quest in the Story mode deals with a struggling farmer and his sheep farm. According to the small intro, it seems that a UFO is hovering above his field. Even more, the aliens are abducting his precious sheep! Your goal is to take down the spaceship and save the poor animals.

By flying high into the air, you can reach the same altitude as the UFO. Once you find yourself at the same level – tap the screen to start firing at the aliens. We advise you to plan the shots and target the vital parts of the ship. Also, improved guns are available at the Shop. These tools can make your shots more potent, taking down the alien ship with ease.