Have you ever wanted to own your own board game, all along with houses, hotels, interesting tiles to step on, and other players that can come to your board and play on it a bit? Well, Board Kings does all that, and more.

The game lets you build your own board game, expand it by adding more tiles, build and upgrade house tiles in order to get more coins by stepping on one, and visit other player boards to get huge rewards, destroy their buildings, and steal their money! What’s not to like?

Now, the game starts slow, with you having a small board with just a dozen or so tiles. By throwing dice you’ll earn coins for stepping onto every tile, with special buildings (bank, rail station, police station, and gem bank) giving you special bonuses. For instance, stepping on the police station will send a police car and place it on a random tile, thus locking every player (other than you of course) who’s luck turns on them and land them on the tile with the police car.

The bank gives you huge coin bonuses for stepping on it, while the rail station drives you to another player’s board. Stepping on the gem bank will give you a couple of gems as a bonus. There’s also a card tile (like in Monopoly), which gives you special prizes when stepped onto.

Now, Board Kings is a relatively easy game to play, right? You roll dice, travel through the board, collecting money and bunnies (bunnies are needed for most upgrades) and expand and upgrade your board with coins earned. But, Board Kings hides some of its mechanics, making players to lose money, chose expensive upgrades, and spend unnecessary real money. We played the game for hours and hours, found some tricks that can push you forward through the game, making it easier to play, and collected them all in this guide. Stay with us and find out how to build a huge board empire!

Most tiles featured on the board are without bonuses. Once stepped on, they give you a certain amount of coins. They are shown as houses, and every single one of them can be upgraded. 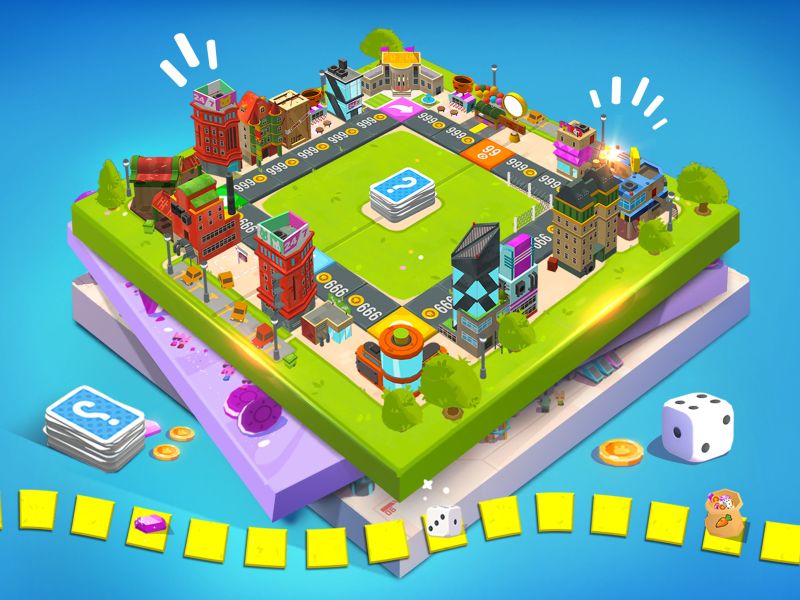 Now, although some ask more coins for an upgrade, they all give you the same amount of coins. For instance, upgrading normal tiles to level 2 will grant five additional coins for stepping onto the tile. So, upgrade cheaper tiles first, and only after all the cheap ones are upgraded proceed with upgrading the rest.

This way, you’ll earn more coins since there will be more upgraded tiles on the board, and will, on the long run, upgrade all normal tiles faster. Remember, these regular tiles can be upgraded indefinitely and higher levels will ask for gems. So, once you notice that regular tiles ask for gems in order to be upgraded, finish leveling up other tiles (the ones that ask only for coins) before leveling up gem-hungry tiles.

2. It’s Better To Wait For Your Rolls To Completely Refill Before Playing The Game

When you start Board Kings, you’ll get a certain amount of freerolls. After you spend them there are two options. You can either pay gems (which can be won by playing or bought for real money) for new rolls or you can wait for your rolls to refill.

Now, it is better to wait for your roll meter to completely fill (to get 30 rolls) than to have just a couple of rolls at your disposal. By waiting for the meter to fill up to the max you’ll be able to play longer, to earn more coins and to upgrade more house tiles. By playing just a couple of rolls (you get for every hour) you won’t earn – in most cases – enough coins for an upgrade, so there will be a surplus of coins on your board which can be stolen by other players.

The best strategy is to play all rolls, and then spend as many coins as you can so that your coin stash ends up being as humble as it can. That way, other players won’t find your board so interesting because they won’t be able to steal lots of coins from you. Since, aside from stealing your coins, other players can also destroy your buildings, having a tiny coin stash will make you less interesting for other players to visit your board. You’ll be left alone, and you won’t have to spend coins for repairing damaged buildings.

3. When Choosing Which Players To Invade, Select Those Who Have The Most Bunnies 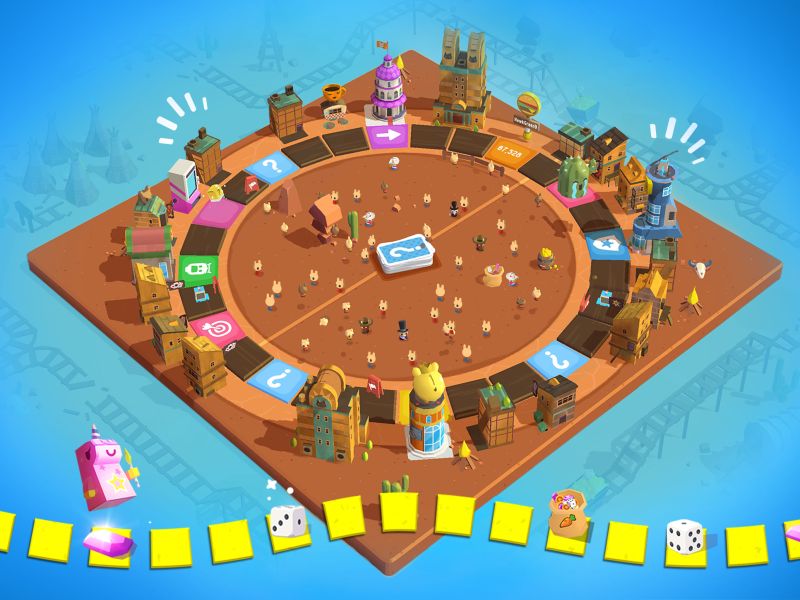 Bunnies are collected the same way as coins – by stepping on houses. They can also be earned by upgrading your buildings, and finishing quests. The more bunnies a player has, the higher the chances are for that player to store lots of coins in their stash. So when choosing which player to invade, always pick the one with the biggest amount of bunnies collected.

4. Don’t Spend Money On The Vending Machine; It Can Only Give You New Playing Figures

In Board Kings, there are dozens upon dozens of new playing figures (called totems) to unlock. They won’t give you any bonus, nor will they grant you more coins for stepping on houses or onto a bank. You can unlock new figures by stepping onto the vending machine. The machine will give you free gifts from time to time, but in most cases, it will ask for 30 gems in order to give you a prize. Since prizes contain exclusively new figures, it’s better to not spend hard earned gems on them, and use the vending machine only if there’s an option for a free prize.

5. When Arrested, It’s Better To Pay The Fine Than To Spend Rolls For Trying To Roll Doubles

When you visit other player boards, you can get arrested by stepping on the tile occupied by a police car. You’ll end up getting arrested and the only way of getting free is to roll doubles. The game will give you an option to pay a certain amount of coins in order to get out of the prison. 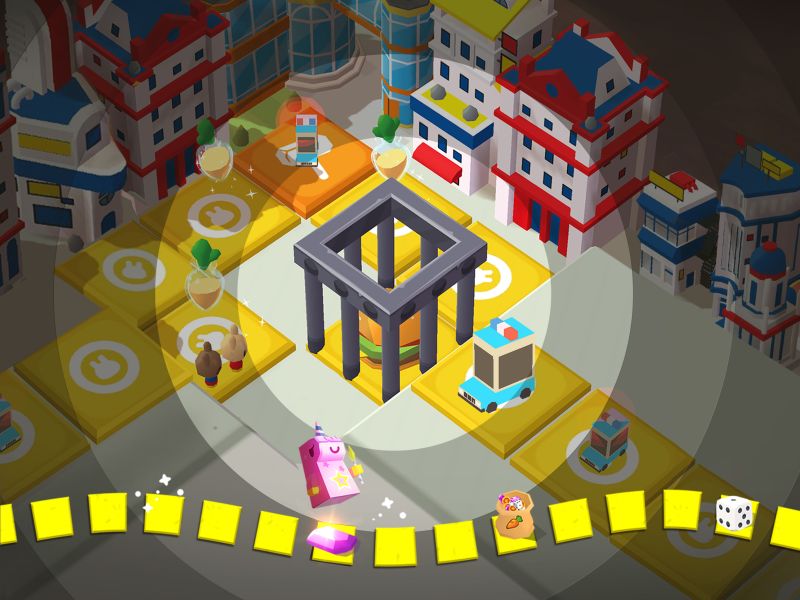 Since rolling double is pretty hard, and for that, you’ll need a lot of rolls we recommend you to pay the coin fine instead of trying to roll doubles. The fines usually cost just a couple of hundred of coins, which you can earn again with just a few rolls. It’s certainly better than spending precious rolls in order to get a double.

6. Don’t Watch Ads, They Aren’t Worth Your Time

Board Kinks will offer you to watch ads in order to get additional rolls. Watching ads to get prizes is helpful in most other games offering the option since the prizes can be quite helpful. Sadly that’s not the case in Board Kings.

You see, the ads usually last half a minute, and the prize is just one additional roll! Watching a video ad for half a minute just to be able to roll dice one more time is a bad offer. Just don’t waste your time on ads, the prize is too humble. The only time this could help you is when you are a couple of hundreds of coins short to buy a house upgrade. Only then watching ads can do you any good, because with one roll you can earn up to a thousand coins.

So, if you need a couple of hundred of coins but you have left without rolls, watch an ad. In all other situations, refuse the offer.

7. Save Up Gems To Buy Extra Rolls

Gems are the luxurious in-game currency. They can be earned by stepping on the Gem bank, or won when visiting other player boards. They can also be bought for real money, and 80 gems will give you ten additional rolls. While this looks like a poor deal, sometimes it can be a life-saving offer. 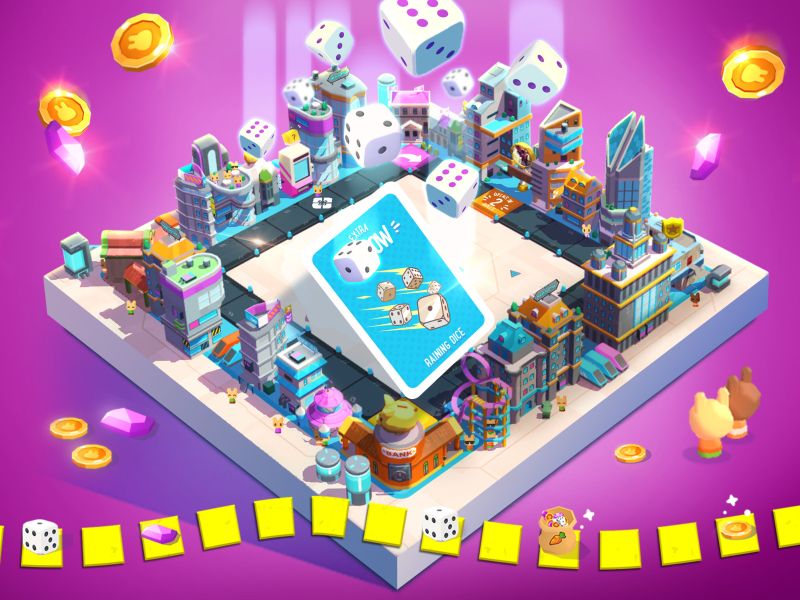 Save up your gems and spend them to buy extra rolls only when you really need those rolls. For instance, you ran out of rolls, but have almost the exact number of coins needed for an upgrade. Or when you need just a few extra rolls in order to send a couple of more cop cars out before exiting the game.

Remember, this can be of huge help but use it only when really need to. This way you’ll be able to spend all of your coins before leaving the game, making your board less interesting for other players to invade it.

Thank you for reading our Board Kings Guide. We really hope it has been a helpful reading, and we hope you learned something that will aid you while you build a perfect game board.

The advice we provided you with in the guide will make the early game easier and will make other players to not invade your board as frequent as other player boards. Remember, do not spend gems on extra rolls and do not leave lots of coins in your stash before exiting the game, those two things are very important to remember. Thanks for reading and happy gaming!

What is the piggy bank that gets full all about? Can I use those stored rolls? If so, how?

When I get jailed on another person's board I have option to run away or pay with gems. Why is it I can't pay with coins??

I have a gold star hopping around that says Level Up when I click on it but it doesn't work. I have plenty of coins but the star comes back when I try to change the level. It won't let me roll, either. What am I doing wrong?

Do you have to pay for the rolls saved in the pig?

How to increase coin in board king game