Published by Ubisoft, The Mighty Quest for Epic Loot is a new hack and slash game that will provide you with endless entertainment. As we all know, Ubisoft knows how to make a great RPG, and this particular release is no exception. You can play The Mighty Quest for Epic Loot on Android or iOS-powered devices. Due to its charming graphics and invigorating gameplay, this game is attracting a lot of players worldwide.

Yet, there is more than meets the eye when it comes to the gameplay of The Mighty Quest for Epic Loot. With that in mind, we created a comprehensive The Mighty Quest for Epic Loot beginner’s guide, featuring a bunch of useful tips, cheats and strategies. By following these guidelines, you will raid all the castles in the magical land of Opulencia with no problems whatsoever.

1. Explore The Levels And Smash Every Treasure Chest Along The Way

As the name suggests, The Mighty Quest for Epic Loot is all about going on exciting adventures. In other words, the goal of the game is to collect as much treasure as possible as you go on raids through the castles in Opulencia. All in all, more than 100 different environments await you in this game, and they all look charming and morbid at the same time. 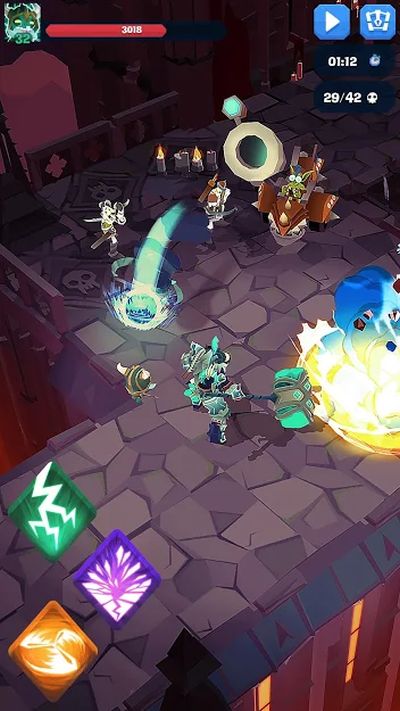 We could also say that The Mighty Quest for Epic Loot is a classical ‘dungeon crawler’. Either way, you will go through various levels, fighting off mobs of enemies. Also, a bunch of treasure chests will be scattered along the way. Well, we advise you to smash every single one of them! By doing so, you will collect as many coins and diamonds as possible, which are in-game currencies. In the upcoming chapters, we will explain why the coins and diamonds are so valuable.

The enemies in The Mighty Quest for Epic Loot come in all shapes and sizes. In most cases, you will be obliterating armies of goblins and skeletons as you go through the missions. In addition, banshees and other haunting creatures will stand in your way. On top of that, the so-called boss fights will put you up against the ‘keepers’. These giants can land a devastating blow, and that is why it is imperative that you learn how to dodge the enemy attacks. 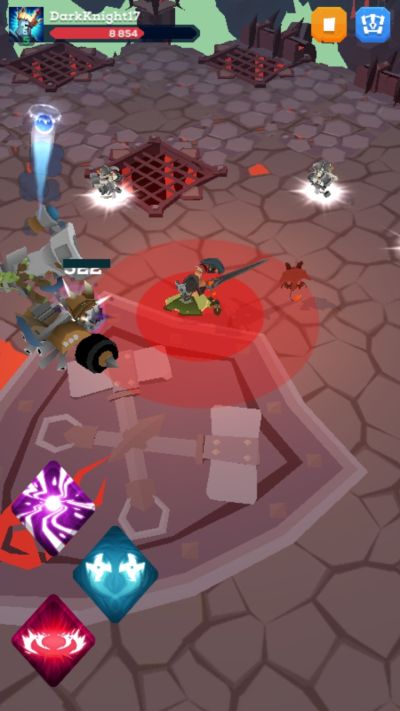 In general, the combat mechanics in the game are straightforward and easy to use. When it comes to dodging in particular, you will need to swipe the screen in the preferred direction. After that, your avatar will roll away to safety. Also, a large red circle on the ground can serve as a warning sign. So, whenever you find yourself within the danger zone, roll away and dodge the blows. The sooner you master the art of evading the attacks, the quicker you will be able to defeat the ‘keepers’ of the higher levels in the game.

3. Equip Your Hero With The Best Gear Out There

Remember the coins and diamonds we mentioned earlier? Well, the bounty you collect on your quests can help you become stronger. As a result, you will be able to collect even more loot, which will allow you to get even better gear. And so on, rinse and repeat. Even though this gameplay loop could sound a bit boring to some players, The Mighty Quest for Epic Loot is everything but boring. After all, this game offers more than 1.000 items you can collect, and this can provide you with days and days of entertainment. 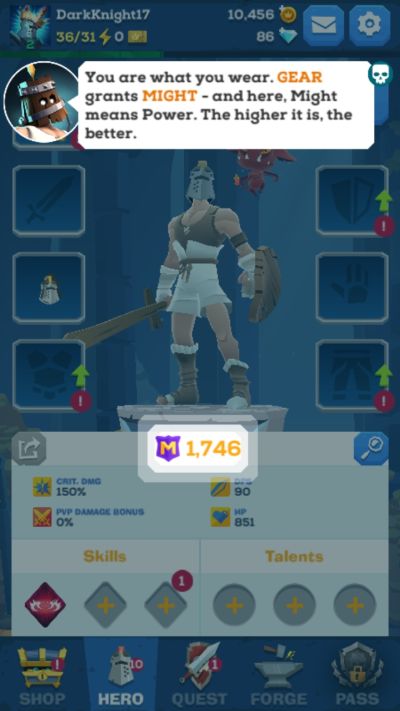 By clicking on the Hero card on the bottom part of the screen, you will be able to equip your avatar with all sorts of gear. From helmets and shields to swords and armor – this game has it all. Of course, you will not have all the items, at least not in the early stages of the game. So, head out there, raid some castles, and collect those powerful items!

4. Upgrade And Promote The Gear

As you progress through the game, the quests will become more and more challenging. Consequently, you will need a more powerful gear to survive the journey. So, upgrading your gear seems like a smart idea. And, The Mighty Quest for Epic Loot allows the players to improve the performances of their gear in a quick and efficient manner.

Likewise, the players can even Promote the gear to the next level. Needless to say, this process further enhances the quality of the weapons and armor.

Yet, the process of upgrading the gear will require a small sacrifice. In other words, you will need to merge the items you are not using with the one you want to upgrade. When it comes to The Mighty Quest for Epic Loot, this process is called fusion. And, the so-called fusion orbs are a valuable item which can help you boost the level of the gear. All in all, explore the possibilities of upgrading and promoting the gear. Every upgrade will raise your Might and you will become even more formidable than before.

High-performance gear is the key to progressing through the stages in The Mighty Quest for Epic Loot. In other words, you have to ‘loot big or die trying’ if you want to restore order in the magical land of Opulencia. However, fearsome enemies will stand in your way. For that reason, we advise the players to use an alternative method for unlocking the amazing gear. To clarify, we urge the players to visit the Shop section and open the Chests at every opportunity. 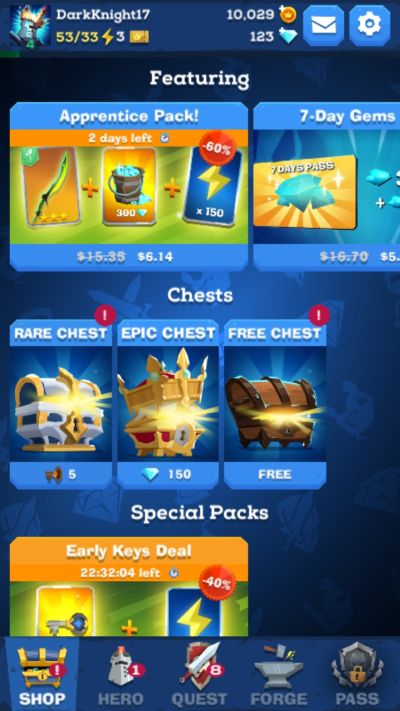 The Mighty Quest for Epic Loot provides players with three types of Chests – Epic, Free, and Rare. As the name implies, the Free chest is the one that you will receive a daily basis. In essence, this category of chests offers items with the lowest value. On the other hand, the Epic and the Rare chests are the ones that you should collect as soon as possible. Of course, these categories do not come free of charge, and you will have to invest a certain amount of diamonds or coins to unlock the treasure.

6. Engage In Side Missions To Unlock Extra Rewards

Even though the Adventure mode is the primary mode in The Mighty Quest for Epic Loot, there are others as well. For instance, the Trials are an interesting element of the gameplay. If you decide to take part in the Trials, you could win some remarkable items. Thus, we encourage you to engage the Trial missions as soon as they become available. Unfortunately, the Trials appear every so often, and you will sometimes have to wait for an entire day before a new stage opens up. 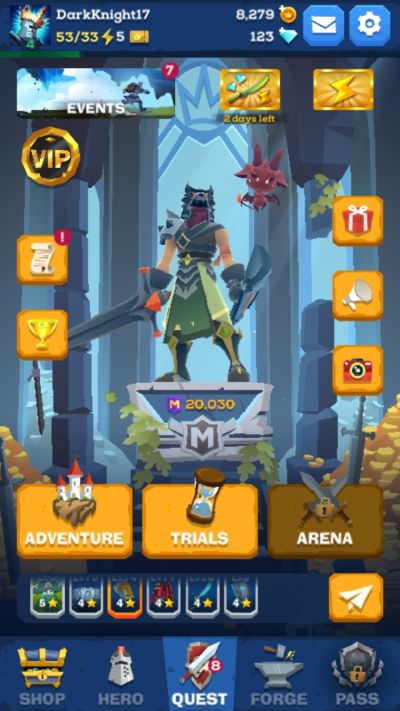 Either way, the Trials are a form of side content that can provide you with extra entertainment and extra loot. The concept of these missions is to survive until the timer runs out. Of course, this is easier said than done. In other words, the hordes of enemies will keep on coming at you in waves. Stronger and stronger opponents will pop out of nowhere, and you have to kill them all to win the epic loot.

At the early stages of the game, you’ll be wiping out skeletons and goblins with one swing of the sword. To clarify, the opponents will not present a challenge at all. Needless to say, this situation can result in boredom, and that is why the Arena is the perfect solution. In case you feel that PvE battles are too easy for you, switch to the Arena and try the multiplayer mode. But, it is important to note that PvP mode is available after you upgrade your character up to level 8.

Of course, the multiplayer mode will face you up against real-life opponents. Consequently, the battles will become much more challenging. Moreover, you will need to be on top of your game at all moments. The Arena works on a simple principle. Once you defeat the enemy – the other one will appear, ready to fight to the death. In short, the Arena is an action-packed section, and you should give it a shot when playing The Mighty Quest for Epic Loot.

8. Rely On Your Skills And Talents When Fighting

Last but not least, a tip that could win you a lot of gold in The Mighty Quest for Epic Loot. Yes, Skills and Talents are an essential element when it comes to combat in the game. So, we advise the players to learn more about them and use them during the raids. By doing so, the opponents will stand no chance. 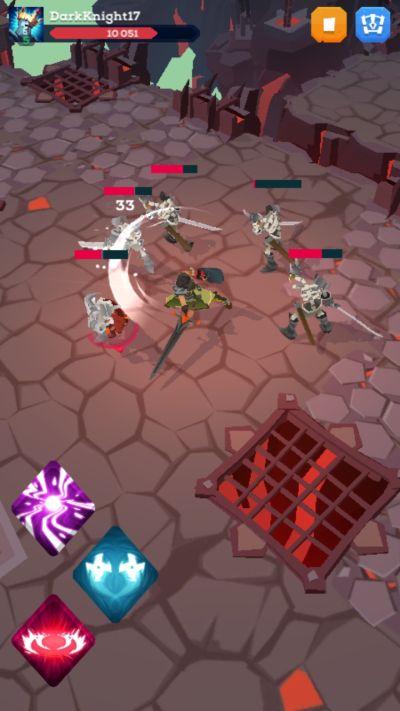 For instance, Skills will appear on the screen in the form of the three icons in the bottom left corner. The purple, red, and green icon can unleash powerful attacks. Yet, it will take some time for the Skills to replenish, so use them with caution. In other words, you need to time your moves and activate the Skills at the right moment.

On top of that, players can combine the Skills, which can result in marvelous attacks. For example, the purple Skill draws the opponents towards you while the red one deals damage to the enemies around you. So, make a combo of these two and all the haunting creatures will be obliterated in the blink of an eye.

With the final tip on our list of The Mighty Quest for Epic Loot tips, cheats and tricks, we conclude this guide. Hopefully, these strategies and tactics will help you on your odyssey through the colorful castles and wastelands of Opulencia. If you know any other useful tips, then be sure to drop us a line!