Talking Tom used to be a plain old virtual pet who repeated everything you said in a different voice. After becoming a huge success, Tom has gone on to bigger and better things. Talking Tom Hero Dash is Tom’s latest adventure, that’s now available for iOS and Android devices.

In Outfit7’s addictive game, Tom transforms into a superhero, and you need to help him chase down the evil raccoon gang members who kidnapped his friends. Travel across different cities in order to save them all from the raccoons. Drive off the villains and restore order in each town. Don’t forget to collect a lot of coins and gems along the way and unlock new outfits for each of your heroes. Do you have what it takes to save the day? Read our Talking Tom Hero Dash beginner’s guide for some useful tips, cheats and tricks! 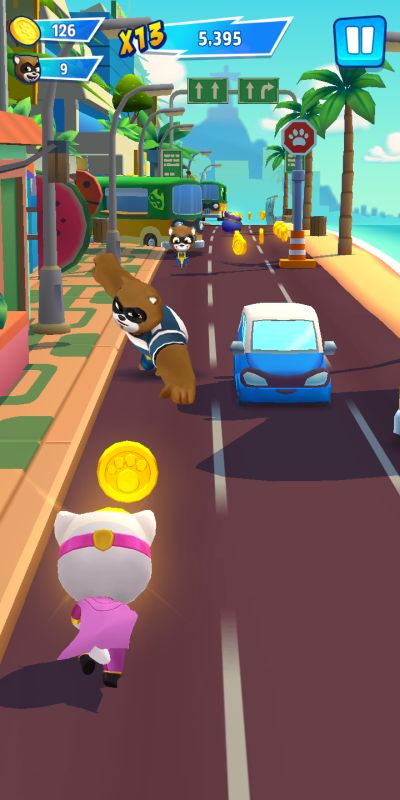 The game’s controls are pretty simple. You just need to swipe left or right to switch lanes, swipe up to jump, and swipe down to slide under obstacles. Each run starts out slow, so you have plenty of time to avoid obstacles, chase down raccoons, and pick up coins. The longer your run continues, the faster your character will get. Soon, you would be going so fast you will barely have time to swipe. When that happens, it helps if you know what’s coming ahead of time. Make it a habit to always look ahead to see how the obstacles are laid out. This will help you mentally prepare for the moves you will be making.

There are several power ups in Talking Tom Hero Dash. These appear randomly throughout the map, and they help you progress in your run. They’re not always noticeable, so make sure you keep an eye out for them. They normally appear on a different lane as the coins. When they do, make sure you always choose the power up. There are a lot of other ways to get coins in the game, anyway.

The magnet power up automatically picks up all coins and coin bags even if they are on different lanes. The super jump power up looks like two arrows pointing up. When you pick it up, your character will make one great jump over whatever obstacles are ahead then will land with a powerful force that can take out obstacles and raccoons in three lanes. The shield power up will give your character a temporary barrier that will make him immune from damage. The lightning power up will make your character zip ahead for a short duration, taking out obstacles and picking up all raccoons and coins along the way.

3. Pick Up Those Raccoons 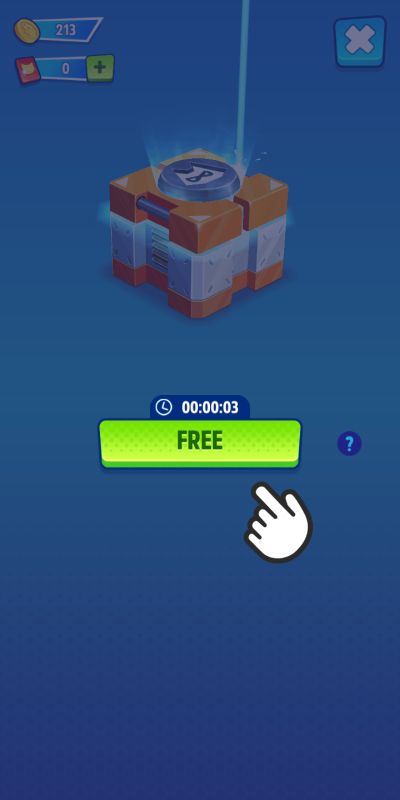 As you progress through your runs, you will come across plenty of raccoons. Pick them up whenever you see them. The good news is that they usually appear on the right path, so you won’t get in trouble for running towards them. At the end of your run, you will get a Super Chest for every 50 raccoons you picked up. Raccoons carry over to the next run, so don’t worry if you pick up less than 50.

You will also encounter bigger and armored raccoons in later stages. You just need to keep hitting them in order to pick them up. Most of the time, these big raccoons play an important role in clearing your path, so it’s always a good idea to ram into them. 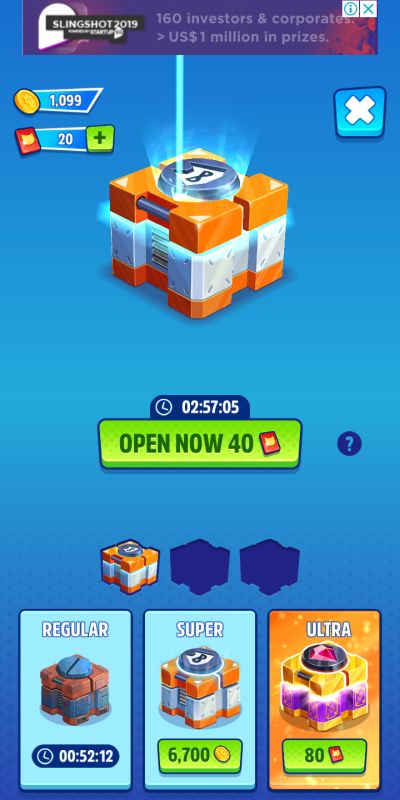 Super Chests take several hours before you can open them, and you can only have a maximum of three at any given time. Make sure you queue up a chest as soon as possible. Otherwise, all additional raccoons you pick up will go to waste. Aside from the Super Chests, you also get a free Regular Chest every 6 hours. Once the 6-hour countdown is done, you just need to watch a video advertisement in order to open the free chest. Unlike most other games, the 6-hour countdown actually keeps going even if you haven’t opened the first free chest. That means you get to open two free chests in a row if you were gone for 12 hours.

You can open more chests by purchasing them from the in-game store. Super Chests cost coins while Ultra Chests cost Credits, the game’s premium currency. All chests have the chance of dropping power ups, costume pieces, coins, gems, and Credits. Of course, the better the chest, the bigger the prizes.

When you accidentally end your run, you can continue where you left off by spending Credits or by watching a video advertisement. Never spend Credits to continue because premium currency is so hard to come by and you can always just watch an ad instead. Ideally, you should only continue your run if you are close to beating your existing record, or you have already beaten it and you just want to push yourself further. If your run had just begun when you died, you may as well just restart instead of wasting time on a video. 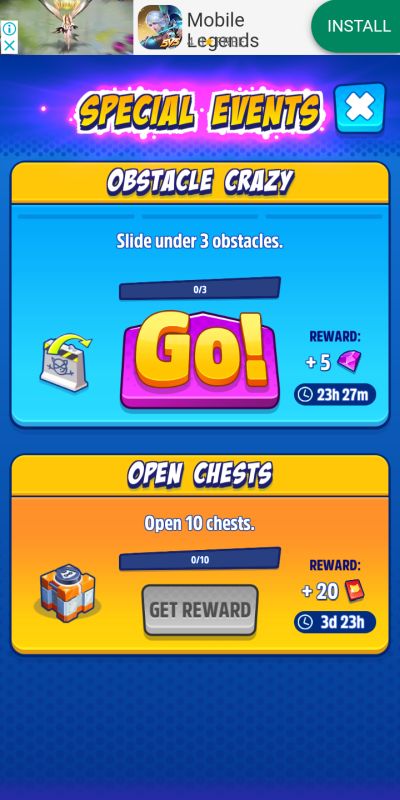 After you unlock Angela, you will be able to participate in Special Events. These are essentially missions that you can complete in exchange for rewards. Make sure you always check the Special Events because this is the best way to earn free Credits. Don’t forget to take note of the time limit on the bottom right of each Special Event. If the time expires before you can complete the event, you will no longer be able to get the reward and the mission will be replaced by a new one.

Now that you know about Special Events, you are probably wondering how you can unlock Angela. All you have to do is fully restore the first town. Tap on the city icon on the bottom of the main screen. You will be taken to town where you will see a bunch of raccoons wreaking havoc. You will need to spend coins and gems in order to clear out the raccoons one at a time. Once you have cleared all of the raccoons, you will have a Boss battle sequence where you need to take apart the Boss’s vehicle until you get to the cage that’s holding Angela.

Completely restoring the first town will unlock the next location. You just need to kick out all the raccoons and restore the next town in order to fight the Boss once more and rescue Hank. Hank and Angela are both playable characters that you can use as soon as you unlock them. They also have their own sets of costumes that you can acquire from chests. 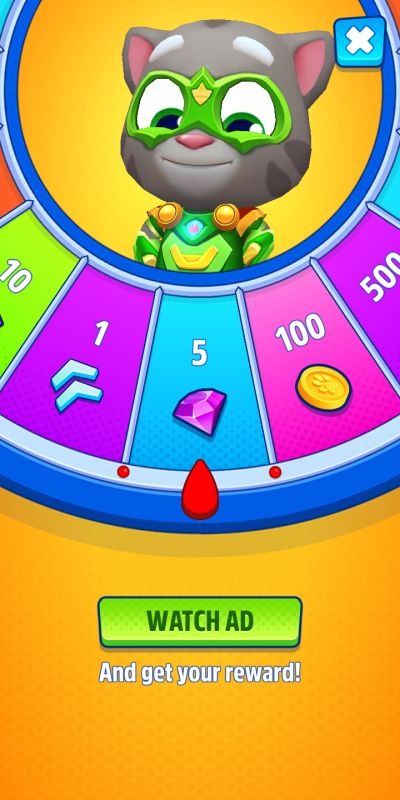 Perhaps the easiest way to earn gems and coins in Talking Tom Hero Dash is by spinning the prize wheel. On the main menu, a chest will appear on the right side of your chosen hero. Tap on it and you will be given the option to watch an ad in exchange for a free spin. Watch the ad then tap on the spin button to get a random prize. The great thing about this is that you can keep watching ads until you get all the coins or gems that you need. The prize wheel also drops power ups and Credits at lower rates. If the chest disappears from beside your hero, just wait a few minutes and it will reappear. If you don’t mind watching a lot of ads, you can earn enough coins and gems to clear the first town without actually playing.

It is time to unleash the superhero in you through Talking Tom Hero Dash! Be sure to follow our tips and tricks and you will be able to obliterate the raccoon gang members with ease!