The Toad Rally is one of the two primary game modes in Super Mario Run, which is, of course, that all-new game from Nintendo that’s available on iOS, but not yet available on Android. As we’ve explained previously, this game is now giving Pokemon GO a run for its money as one of the most popular titles in recent mobile history, and it’s easy to see why. Nintendo has taken all that’s good about the Mario franchise and translated it into an experience designed for mobile, creating a side-scrolling platformer with 24 levels across six worlds, six playable characters, and, once again, two primary game modes, namely the single-player Tour mode, and the multiplayer Rally mode.

We’ve already talked about the Toad Rally in our Super Marion Run ultimate strategy guide. But if you want to get the gist of the Toad Rally in specific, we’ve come up with a specific Super Mario Run strategy guide that talks exclusively about this game mode, as well as the Toads you can add to your Kingdom. So read on, as we share some helpful tips and tricks on how to win more Rallies, as well as unlock all of the Toads in this game.

1. The Basics Of Toad Rally

Toad Rally is Super Mario Run’s multiplayer mode, and your score in this mode is determined by two things – how many coins you collected, and how many Toads gave you the thumbs-up. Some say that both items are equally important, and that you should try to collect as many coins and impress as many Toads as possible at the same time. But there are others who believe that impressing Toads is slightly more important. If you win a Rally, that means the Toads you impressed will be added to your Mushroom Kingdom. While coins can be collected in Tour and Rally mode alike, Toads can only be gained by winning Rallies, so it does make sense to put a higher premium on impressing them in your runs.

2. What Happens In A Toad Rally?

Once the Toad Rally begins, you have 60 seconds to impress the Toads by pulling off the moves that are designated as a thumbs-up in the Notebook and collect as many colored coins as possible. Those thumbs-up moves mean that they are crowd pleasers, so you want to focus on them (and the coins) more so than finishing ahead of your opponent or going a certain distance. You will be racing against “ghosts” of other players, and you don’t need to worry if the ghost is well ahead of you; oftentimes, they might not have been that impressive or collected that many coins after all. The same, of course, applies to you.

You should only be looking out for yourself when playing in Rally mode. Don’t pay much attention to the ghost, but if you see an “X,” that signifies the point where their run had ended. That should give you an idea of the more dangerous points in the Rally, so take good care once you’re in or around an “X” mark.

3. It’s Okay To Refresh Your Opponents

You may encounter situations where your current batch of opponents in the Toad Rally are too good, leaving you little chance of winning regardless of the opponent you choose. If that’s the case, you can simply go back to Tour mode and play or replay one of the levels. Once you go back to Rally mode, you will see a new batch of opponents to choose from, and hopefully they will be easier to defeat. You can also employ this strategy if all the Toad colors you’re looking for have been assigned to more difficult opponents.

4. What’s The Deal With Mushrooms?

There’s a very good case with using Mario as your character in the Toad Rally. While the other characters are, regardless of their size, always considered “small,” meaning they will always die when hit once. That puts them at a huge disadvantage should they “die” and go back a bit once they get into the bubble; instead of earning coins and gaining favor from the Toads, they’ll just be sitting there, unable to do anything. But since Mario can become “big” once he collects a mushroom, you can use him for an extra advantage and an extra cushion considering the dangers that lurk in Rally mode.

5. Chase After The Stars And Pink Coins

We strongly suggest prioritizing the stars and the pink coins when playing the Toad Rally. Stars can be collected by going through red rings, rotating blocks, and other means, so you want to impress the Toads by pulling off those tricks and collecting Stars that way. Likewise, you should employ a similar approach with the pink coins, as they are valued at 10 coins each, and are a great way for you to get the Toads to like you.

6. You Can Ask For A Rematch With A Twist

Once you lose a Toad Rally, and you will eventually get to that point if you haven’t yet, you will lose Toads, making this a rather high-stakes in-game mode. But you can ask for a “rematch” for one ticket, and the reason we use quotation marks for “rematch” is as follows. That rematch will be against the same player, but their final score will be different, representing how well they did in another run. That means you should think long and hard before challenging someone to a rematch; you may think you lost by such a close margin that you have a realistic chance of winning the second time around, only to find out that the rematch score is higher after all. The good thing here is that it probably won’t be that much higher, but in most cases, you’re better off finding a new opponent than gambling against the same player.

7. Unlocking Toads In The Free Version

Super Mario Run has a free version and a paid version, and as you may have guessed, there are things that make the free version a “lite” take on the paid edition. These include the fact you can only unlock red Toads in the free edition. So if you want to unlock the other color Toads, you will have to make some in-app purchases. Just as a reminder, the in-app purchase will cost you $10 or its equivalent in real-life money, so that’s a rather hefty investment in relation to the usual cost of in-app purchases.

8. What Happens After You’ve Paid For The Other Toads?

After paying to unlock the other color Toads, you will have to defeat the first world in Tour mode. This will allow you to unlock the green Toads. But you will then have to go through the second world and complete it if you want to get the blue and yellow Toads. That’s going to give you the full complement of Toads, and once you’ve done all that, you can then return to the Toad Rally and take advantage of the full benefits of that ten dollars you spent to get the game’s full version.
You can then look at the Toads that are available from any given opponent. It will always be red Toads if you’re playing the free edition, but if you’ve paid and if you’ve completed worlds 1 and 2, you will see Toads of different colors. Remember that not all of your opponents will have all Toads available at their disposal.

9. What’s In It For You With The Colored Toads?

Once you’ve got enough Toads of all colors, they will serve as a pseudo-currency of sorts, allowing you to buy more buildings, add to your decorations, and get you a lot of other items that won’t be available if you only have the red Toads. And those buildings, as we explained in the list of general tips and tricks, will allow you to get more characters instead of simply having Mario as your only choice of player. 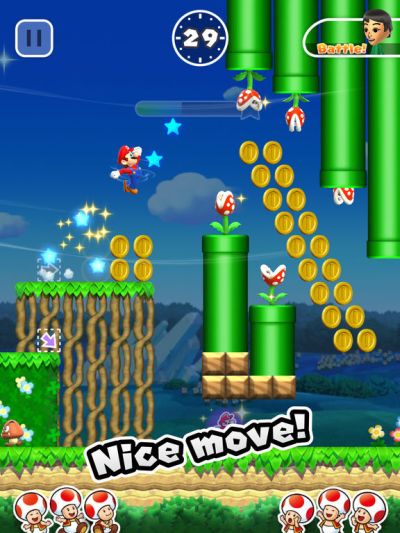 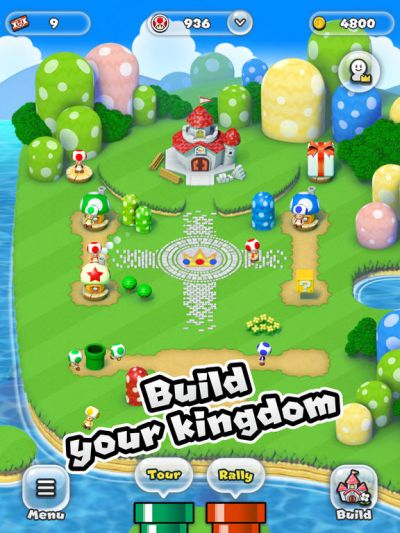