Squish Machine is a deceptively cute little puzzle game with some pretty deadly consequences. This iOS-exclusive game lets you control adorable characters as you go through different levels. The goal for each level is to push a number of colored buttons in order to turn of the machine. You will only have a limited time to do this because the machine will squish you if you are too slow. There are 16 different characters for you to unlock and over 120 levels to complete. Do not let all the cuteness fool you, though. The difficulty level ramps up quickly as you progress in the game. Soon, you will be dodging obstacles and jumping through hoops just to get to the next button. Do you have what it takes to survive all the levels? Check out our Squish Machine tips and tricks if you want to make it all the way to the end! 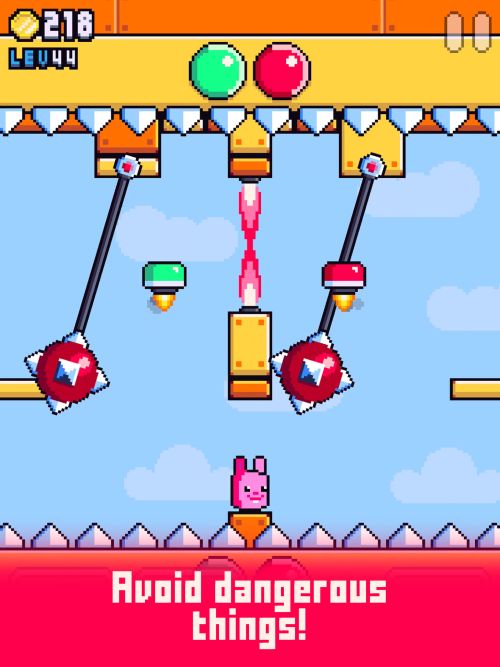 There are only three buttons that you need to worry about in Squish Machine: Left, Right, and Jump. The most important button that you will be using, however, is the Jump button. While jumping is pretty much self-explanatory, this button actually has a bigger purpose than just getting you from one platform to another. You can repeatedly press the Jump button in order to hover in midair. It takes a bit of getting used to, since you are basically flying Flappy Bird style, but once you have it down, it makes your life a lot easier.

As we mentioned earlier, your goal is to push all the buttons needed to stop the machine from squishing your character. You will usually have multiple buttons to press within a level before you can stop the machine. Take note of the number of buttons before jumping around. You want to have an idea of where most of the buttons, so you can plan your moves. You might not have the chance to backtrack once your character is jumping in mid-air.

Plan the order in which you will be hitting the buttons. While you can get away with jumping towards whichever button you see first, this habit will be punished in later stages of the game. Keep in mind that you have a time limit. If you waste your time going back and forth between the platforms, you will most likely end up dead. Analyze the screen and figure out the most efficient route to take.

You will start encountering enemies in early stages of the game. The enemies have varying movement speeds, with slower ones being easier to kill or avoid. One thing to keep in mind is that just because you can kill an enemy does not mean you should. That’s because some stages can only be solved if you use certain enemies strategically. If you went rogue and killed all of them, you will end up sitting alone in the middle of the stage, waiting for the machine to flatten you. It is better if you avoid enemies as much as you can until you finally need them.

A good example of using enemies strategically is the mine monster. It is a mine that follows you around and will explode upon impact. There will usually be more than one of these pesky monsters, and that is a good thing. Use it to your advantage by luring them towards each other. They will explode when they hit each other, allowing you to proceed with the level without having to worry about getting followed.

One thing to keep in mind when playing this game is that you don’t really need to worry too much about dying. If you can’t seem to figure out the solution by just staring at the screen, it might be time to just do something and see what happens. The worst-case scenario is that you may need to watch a video advertisement in order to start over. That isn’t so bad compared to other games where you run out of lives and have to wait several hours to continue playing. 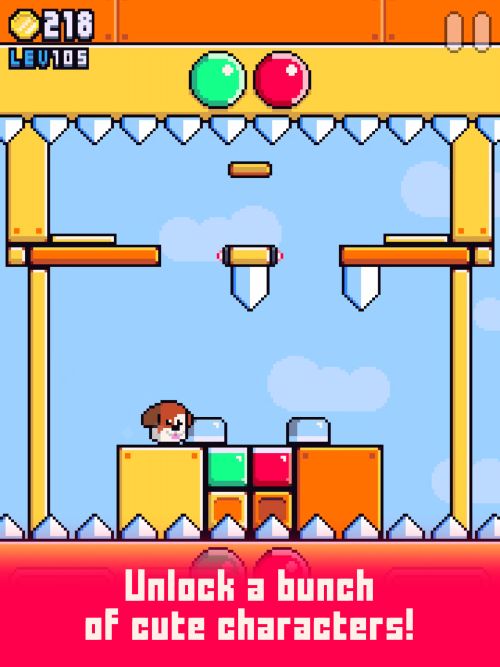 Different levels require different solutions. Since the game is time pressured, you might be tempted to just rush through the levels as quickly as you can. Remember, this is a puzzle game, not a race. There are some levels that will require you to slow down, so you can figure out how to avoid enemies and obstacles. If one approach does not work, try switching things up a bit and you might be pleasantly surprised.

Since Squish Machine has platformer elements, there is some skill required when it comes to controlling your character. Make sure you time your movements correctly in order to get to where you need to be. If you press and hold on the Jump button, you will get a higher, but slower leap. Short taps on the button will allow you to make it through smaller gaps. Master the timing of your jumps in order to make it through all the obstacles in the game.

Aside from the long and short taps on your controls, you should also rely on visual cues when timing your jumps. There are a lot of hints scattered throughout each level when it comes to timing. For example, the laser cannons have light indicators on them. They will fire when all the lights are on. Use this visual queue to jump while there are still lights that are off. Keep an eye out for such clues, so you will know when the best time to move is.

6. How To Unlock New Characters

There are 16 characters in the game, but only the first one is available for free. You can unlock the others by spending coins. The character prices differ, starting with 50 coins for the cheapest one. Even though there is a price difference, they all work the same way. There are no special skills or advantages for unlocking the more expensive characters. Of course, it would be fun to play as a ninja or a one-eyed alien once in a while. You can collect coins by picking them up while playing through the different levels. Since the only use for coins is to unlock cosmetic characters, make sure you do not sacrifice your run for the sake of grabbing that one extra coin.

Surviving the Squish Machine isn’t easy, especially when you have the threat of certain death looming in the horizon. Follow the tips and tricks listed above if you want to make it out alive!