With is minimalist design and creative gameplay, Shootout 3D is an addictive mobile game that attracts a lot of players worldwide. Published by Kwalee, this game is available for both iOS and Android devices. Even though, Shootout 3D is a light game in terms of file size, it offers a lot of fun.

At the same time, the mechanics of shooting in this game could cause problems for some players. For that reason, we have come up with an in-depth Shootout 3D guide tips, cheats and strategies. By following these methods, you will grasp the basics of the game in no time! On top of that, you will be able to eliminate all the enemies and protect innocent civilians. So, let’s dive deeper into this exciting game!

1. Pick The Right Angle For The Shot

When playing Shootout 3D, you will be using a lot of geometry. In other words, the laser-guided shooting will require a lot of tactical thinking. Even so, the mechanics of the game are not as demanding as they may seem at first. Moreover, a quick tutorial at the start of the game will provide you with important guidance. 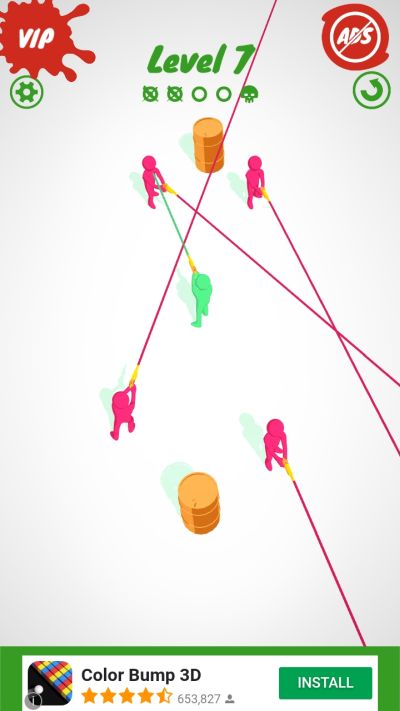 First and foremost, it is important that you learn how to aim and shoot in Shootout 3D. Well, you will move the gun by swiping the screen to the left or right. As a matter of fact, your avatar can rotate in 360 degrees, and this allows for all sorts of shooting opportunities. Either way, your goal is to lock on the target without causing harm to yourself. To clarify, you will have to pick the right angle before taking the shot. By rotating your avatar, you will also twist and turn the guns of your opponents on the battlefield. So, move their guns away from you and tap the screen to shoot!

2. Observe The Situation On The Battlefield

At the early stages of the game, Shootout 3D will present you with easy missions. The number of enemies will be small, and you will get rid of them in a quick and straightforward way. But, things will start to change as you move through the game. In other words, the higher levels will demand much more thinking and planning before you take the shot.

So, we recommend that you take your time before tapping the screen and releasing the bullet. After all, the missions in Shootout 3D do not come with a timer so the duration of the stage is not limited. In the same way, you have unlimited ammo. But, be careful with shooting in this game. Since the opponents will also release the bullets at the same moment as you do – you could find yourself in the line of fire. For that reason, observe the situation and prepare everything before you start the showdown.

3. Protect The Civilians At All Costs

It goes without saying that you should protect your avatar at all times when playing Shootout 3D. Likewise, the hostages deserve to be protected at all times. Since the bad guys in Shootout 3D seem to be kidnappers, your task will be to take them down and free the innocent civilians. To do so, you will have to find the perfect line of shooting. In most cases, this will be easier said than done. 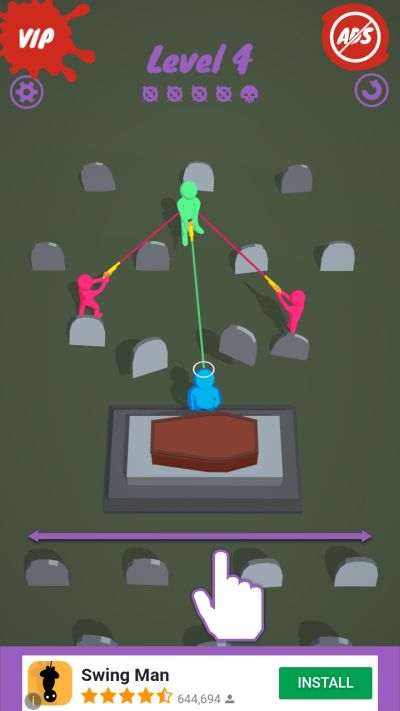 Luckily, we are here to help. So, the secret to the successful protection of the civilians is finding the right angle to start the gunfight. Once you release the first shot and eliminate one of the terrorists, the situation should take a turn for the better. After that, you should rotate your character in 360 degrees until you find the angle that once again offers a safe shot. So, repeat this process over and over again, rinse and repeat. In the end, do away with the last of the terrorists and liberate the hostages.

4. All Of Your Avatars Must Stay Alive

When it comes to certain levels in Shootout 3D, your avatar will appear alongside his twin brother. To clarify, there will be the two of you against a band of bad guys. And, as much as you may appreciate the help, the extra avatar could cause problems as well. Why? Well, you have to think about the safety of the other guy! If he gets caught with the bullet – the mission is over and you will have to try all over again. 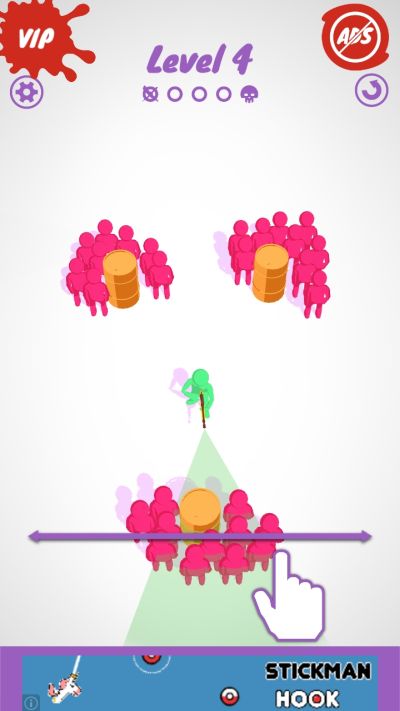 For that reason, we suggest that you treat the two avatars in the same way. Think of them as one unit and do not allow them to get in the line of fire. After all, the battlefield in Shootout 3D can quickly turn into a massacre. Thus, it is imperative that both soldiers of justice survive the slaughter. To sum up, keep the enemy lasers away from the good guys. By doing so, you will beat even the toughest of the bosses in Shootout 3D.

5. Create A Ricochet To Kill Enemies From A Distance

As we said, the levels in Shootout 3D will get progressively harder and harder as you go through the missions. Once you win the boss fight at the end of every level, you will earn the rights to move onto the next stage. And, sooner rather or later, you will need to learn how to rely on different objects to win the standoff. To clarify, the gameplay of Shootout 3D allows the players to use all sorts of items to kill the enemies. 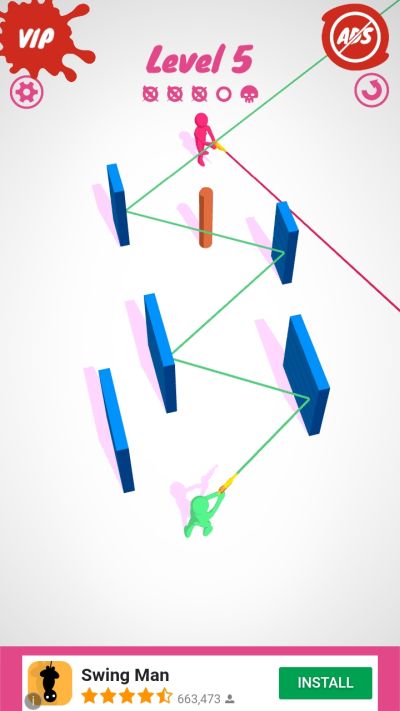 For instance, the walls are a great way to wipe out the opponents. Once again, the laws of geometry will be at play here. So, you will need to point the laser at the right angle against the wall. Consequently, the bullet will rebound off of the wall at a certain angle. In some levels, there will be a couple of walls, which will allow the bullet to rebound many times before it reaches the target. Even so, the ricochet will let you get rid of the enemies that are not standing in your direct line of fire.

6. Shoot The Barrels To Cause An Explosion

Speaking of objects in the nearby area, barrels full of dynamite are an ideal solution for your problems in Shootout 3D. In short, you can eradicate the threat by detonating a barrel or two. So, all you need to do is point the angle of your shot in the direction of the barrel. After that, tap the screen to release the trigger. In a way, the barrels are a great trap, and we suggest that you always make the most of this opportunity.

On top of that, the terrorists can trigger the detonation themselves. Thus, you should also take advantage of this possibility. Therefore, point their guns towards the barrels and tap the screen. Since the terrorists in this game are not the sharpest tools in the shed, they will commit a suicide bombing without a second thought. Needless to say, you just need to make sure that you stand far enough from the blast.

7. Shoot At The Piles Of Timber To Squash Your Enemies

At times, Shootout 3D can turn into a sort of a morbid game. For instance, the next tip in our list is a bit bizarre, even though the game features cartoon-like graphics. To clarify, there will not be a lot of blood around, but the concept of squashing the terrorist with giant logs could make your stomach turn. 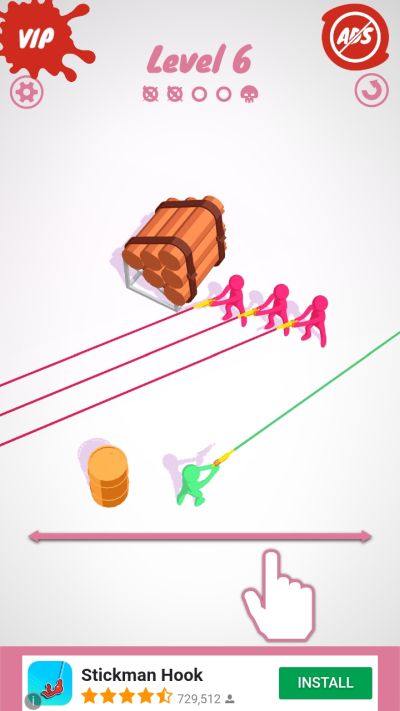 But, if you are not overly sensitive, you should not have problems with pointing your gun at the logs. So, if you notice a pile of timber somewhere near the enemy – aim the gun at the pile. If you shoot the timber, the logs will roll down, crushing everything in their way. In most cases, evil terrorists will find themselves in front of the avalanche of wood. And, you will get rid of them in a quick and effective way. Yes, the method may be a bit brutal. But, the important thing is that the hostages are safe and sound.

Every once a while, you will come across complicated levels in the Shootout 3D. But, with a bit of creativity and strategic thinking – you will find a way to overcome the opponents. However, some levels will be more challenging than others. And, no matter how much you try, it will be impossible to find a solution. So, when such a moment comes, it is good to know that the game offers a simple and effective solution.

At the bottom of the screen, you will see an enticing offer. To clarify, the game will let you skip a level if you watch a promotional video. As you know, the ads will take about 20-30 seconds of your day. It goes without saying that you should accept the offer. By watching the ad, you will save much more time than by trying to defeat the enemies in a tough and complicated level.

There you have it! This wraps up our guide for Shootout 3D. If you happen to know more tips, cheats and strategies that could be of use, please leave us a message in the comments!