From the creators of Crossy Road comes another epic arcade puzzle game called Piffle! Available on Android and iOS, this game adds a twist to classic block-breaking gameplay. The goal of the game is simple. You just need to smash all the blocks on each level in order to clear it. To smash the blocks, you will have the help of piffle balls. You start off with a handful piffle balls and you can pick up more as you play through a stage. The more balls you have, the easier it will be to destroy the blocks.

Don’t get too comfortable, though. Piffle starts out easy but quickly ramps up in difficulty as you progress. Soon you will be going up against crazy blocks the move and produce even more blocks. You will need to maximize the use of each ball if you want to succeed. It’s a good thing you can rely on our Piffle cheats, tips and tricks to help you rake in those points!

As you play through the levels, you will quickly realize that resources are hard to come by in Piffle. This is why it is extremely important that you don’t miss out on any freebies. One easy source of coins and items in the game is the daily login bonus. You get to choose one from nine possible prizes each day. On top of that, you can watch a video advertisement to pick a second prize. Make sure you are connected to the internet before you log in for the first time each day in order to take advantage of the second gift!

The game’s mechanics seem simple at first. You just need to tap and drag on the screen in order to aim then let go to send the piffle ball flying. The ball will follow the path of the dotted line, but it will only tell you the path towards the first bounce. It is up to you to predict the direction the ball will take after it bounces. It’s really just a matter of physics, so if you have played similar games before, you should be able to predict the path after a few tries. Your character will move to the spot where the first ball touches the ground, so pay attention as well to where they will most likely drop. You don’t want to end up with a bad angle in the next round.

The balls will continue to bounce without losing momentum as long as they hit the ground. That means it can keep going for quite a while if it gets stuck behind a row of blocks. This is usually what you want to aim for unless there are blocks at the bottom that are almost touching the ground. Try to get as many balls stuck behind blocks in order to maximize the damage that they deal. Aiming sideways instead of straight up also helps keep the balls in the air for a long time. If the balls are taking too long to travel, you can press the fast forward button to speed things up. Don’t worry because the fast forward effect will stop as soon as the last ball hits the ground. 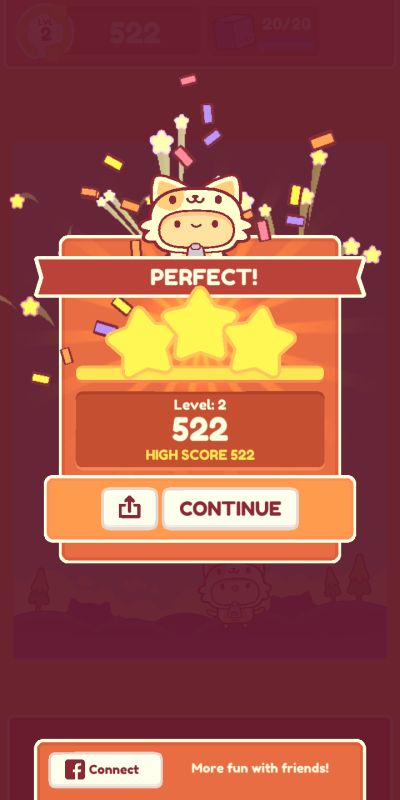 Every level you complete has a star rating. The highest possible rating is three stars. Each star you acquire will go towards unlocking a chest. You will see how far along you are in terms of opening that chest by checking the yellow icon on the top right of the screen. The more stages you complete, the sooner you will be able to open that chest. These chests contain coins, power ups, and crafting materials. Make sure you try to collect as many stars as possible in order to open a lot of chests!

There are several types of special blocks in Piffle. They can help or hinder your progress depending on how you use them. The game does a great job of explaining how each special block works, so it is only a matter of figuring out how to use them properly. For example, the Lightning block will empower all piffle balls that pass through it. That means each ball will deal double the damage to all the blocks it hits until it hits the ground. Try to aim in such a way that you will pass by one of these Lightning blocks, so you can take advantage of the damage bonus before they disappear. Familiarize yourself with the different special blocks so you can incorporate them properly into your strategy.

Aside from special blocks, you will see piffles floating around beside the blocks. When a ball passes through them, they will drop and add one more ball to your arsenal for the rest of the level. Try to pick up as many extra balls as you can as it will help you take out high-numbered blocks in one shot. Just make sure you are not wasting any moves on picking up these extra piffle balls. Aim in such a way that the balls will pass through the piffles but will also go on to destroy blocks afterwards. 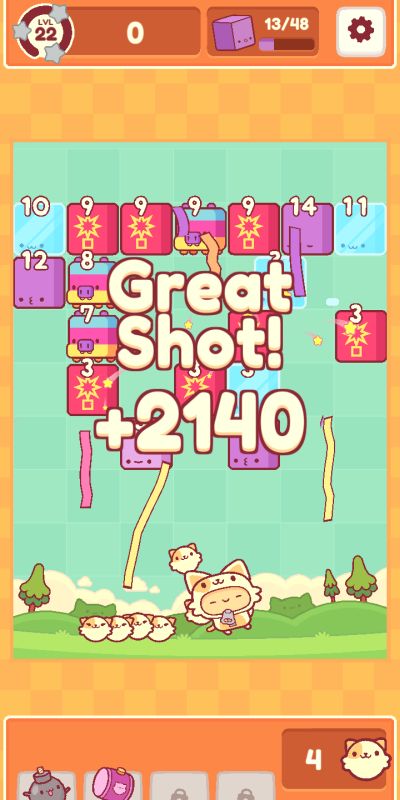 While it is entirely possible to complete a level with brute force, the game does reward you extra points for style. There are different moves you can accomplish that will reward you with bonus points, allowing you to push your high score further. A Good Shot means you were able to take out multiple blocks in a single shot. A Great Shot means you were able to wipe out all the blocks on the screen. You also get a Bounce Bonus if your piffle balls bounce around for a long time. A Hero Piffle is a bonus you get when you have a single piffle ball get stuck between blocks and end up bouncing back and forth until it takes out several on its own. Aim for these fancy moves whenever you can in order to maximize your score.

7. Use Your Power Ups Sparingly

As we mentioned above, resources are hard to come by Piffle. That includes power ups. You get a handful of each power up every time it is introduced. After that, you will need to unlock them from chests, get them as rewards, or purchase them with coins. Since you don’t get a lot of coins to begin with, it is not advisable that you spend them on repeated power up purchases. Try to complete each level without the help of power ups. If after several tries, you still can’t get through, you can go ahead and use a power up. Just make sure you use the correct power up for that level to avoid waste. The game will often recommend a power up indicated by a green thumbs up icon, so go with it if it is available.

8. When To Use Your Last Chance 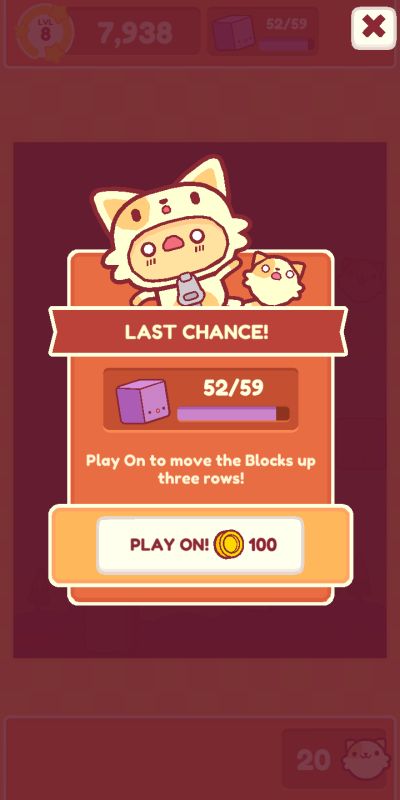 When you fail a level, you will be given the option to continue where you left off by paying 100 coins. Again, this is not recommended because precious coins are hard to collect. If you really must continue, make sure you are only a few blocks away from completing the level. You will see how many blocks are left before you agree to continue. Even if you are close to completing the level, it is still recommended that you start over instead of wasting 100 coins. The only time that it would really be necessary is when you used up power ups on a particularly challenging level and you are certain that you will be able to complete the level after spending the 100 coins.

When you reach level 18, you will be able to unlock the Crafting section. You can access it by tapping on the fifth button at the bottom of the screen. There are two tabs here: Patterns and Ingredients. You automatically get the Admiral Muffins pattern when you unlock the Crafting section. Other patterns can be acquired from chests and special levels. Each pattern will require a set of ingredients. These can be acquired from chests as well as rewards. Once you have all the necessary ingredients, you will be able to craft a new piffle that you can use in-game.

10. Take On The Daily Bonus Challenge

The Daily Bonus Challenge is unlocked upon reaching level 22. This is a level that you can play in exchange for a chest. Keep in mind that the level changes every day. That means you need to complete it before the day ends or you will miss out on the reward. The Daily Bonus Challenge also consumes hearts when you play it, so you will not be able to play if you used up all your lives in regular levels. Try to complete the challenge first before you spend more lives in the normal stages. You should also watch out for the Special Events as it will reward you with more valuable items such as exclusive patterns for crafting. 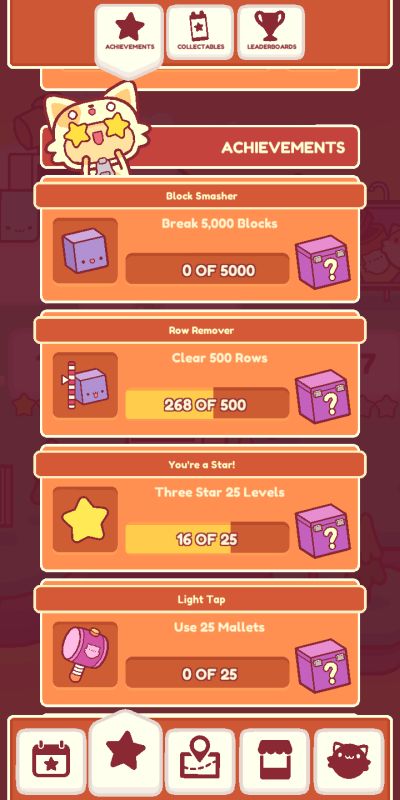 When you tap on the star button at the bottom of your screen, you will be able to see your progress in the game as well as the list of available Achievements. These are milestones for certain activities such as breaking a specific number of blocks or using a power up a number of times. You will receive an in-game notification if you accomplished an achievement, but it is also a good idea to check this section regularly in case you missed the pop up. Rewards include coins, power ups, crafting items, and patterns, so try to claim as many as you can.

Upon completing a level, you will sometimes see a play button below your star rating. Tap on it and a video advertisement will play. Once the ad is done playing, the amount of coins you earned from that round will double. The button isn’t as prominent as you would want it to be, so it is possible to miss it if you are in a hurry to move on to the next round. Keep your eyes peeled to make sure you are not passing up a chance to earn additional coins. Make sure you take advantage of this whenever it is available. Each video only takes a few seconds, so there isn’t really any reason to skip this offer. 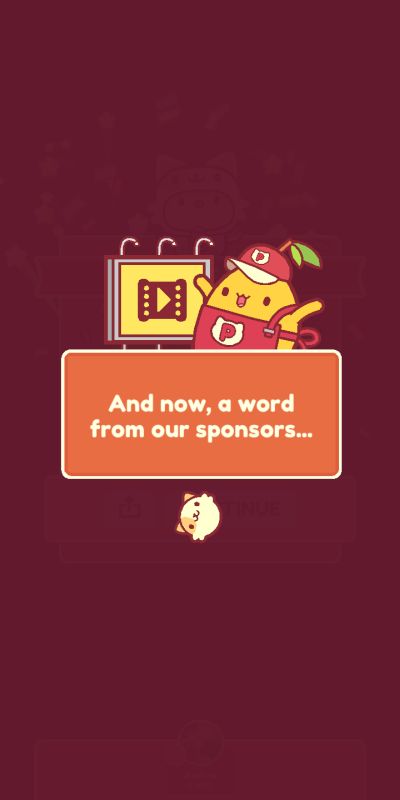 After a couple of games, a video advertisement will show up. The developers are actually pretty considerate with pop up ads because they only appear occasionally, and you can skip them after the first few seconds. If you really can’t stand any type of advertisement, you can just play the game while your device is in airplane mode. Keep in mind, however, that you will not be able to take advantage of the coin bonus ad offer and the second daily gift if your device does not have access to the internet. Of course, you could always get rid of ads the legitimate way through any in-game purchase. Don’t worry because you will still have access to the ad offers even if you pay to make the pop up ads go away!

As you may already know by now, you can only have a maximum of five hearts. Once these run out, you will have to spend coins to recharge your lives to continue playing. Otherwise, you need to wait for them to regenerate over time. Of course, you don’t want to stay in game and stare at the screen while the hearts regenerate. Instead, you can just turn on the push notifications. This way, you can just go about your daily business and the game will inform you when your hearts have been fully recharged.

You are now ready to demolish some blocks! Make sure you follow our list of Piffle cheats, tips and tricks above and you will be breaking records scores in no time!