Merge Plants: Zombie Defense by prolific developer ONESOFT is the type of zombie defense game that doesn’t end with zombies munching your brains out. Merge Plants is played by merging together the different defensive plants in the comfort of your backyard. It’s an easy game to get into. How can you even relax with zombies coming? Well, Merge Plants lets you do just that.

So far, the game has sixty plant types at your disposal. They help you keep your brains intact by spitting at the incoming zombie hoard, while you sit back and relax inside your house. Zombies litter the road, and it’s your job to upgrade your plants so they grow stronger and more capable to kill the zombies. Whoever said that gardening won’t be useful in a zombie apocalypse is clearly wrong.

Merge Plants: Zombie Defense’s gameplay doesn’t require much from the player – it’s played half idle and half active. It’s also not the jealous type. Feel free to play this only when you have free time, and you can leave it whenever you like. It’s a good game to play during study breaks. It’s perfect for kids!

Merge Plants: Zombie Defense could be played both actively and passively. Actively playing the game means managing your plants for long sessions, changing things up as different scenarios arise. Passively playing Merge Plants: Zombie Defense means opening the game, use up all the resources you collect while offline, set up your plants, and then leave the game offline for a while – rinse and repeat.

This Merge Plants: Zombie Defense guide aims to help you progress faster without having to resort to microtransactions by maximizing the resources given to you. You’ll find a lot of recommendations on triggering optional events and actions in this guide which will help you make more powerful plants that can help defend your lawn. So without further ado, let’s get plantin’ and mergin’ in Merge Plants: Zombie Defense.

Before diving right into resource management and strategies, let’s first talk about the game interface. In the above image, we’ve broken down the screen into the basic elements, and numbered them accordingly. We’ll talk about them one by one. 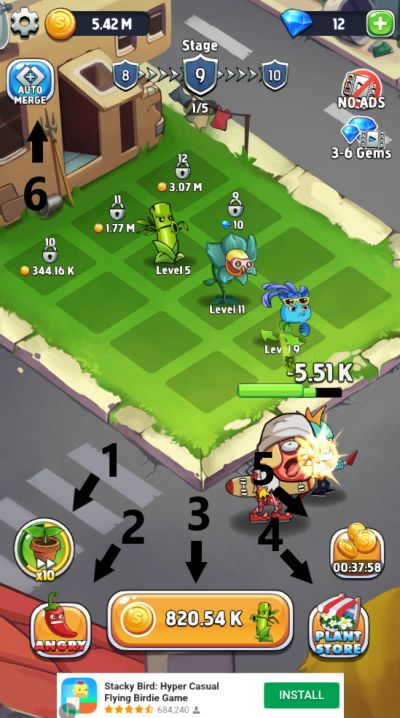 FAST GIFT: It’s raining… plants, hallelujah! The first item on our interface tour allows you to place plants on your lawn more quickly, as if those plants are manna from heaven. Unboosted, using this feature will automatically provide you with a decent-leveled plant (which scales depending on the highest-leveled plant you have) every fifteen seconds. Having this around is both a blessing and a curse. It’s a blessing since you receive free plants every 1.5 seconds. It’s curse because you might be overwhelmed by the amount of plants you have in your backyard. But having too much plants is a good problem to have. More plants mean less zombies marching towards you. 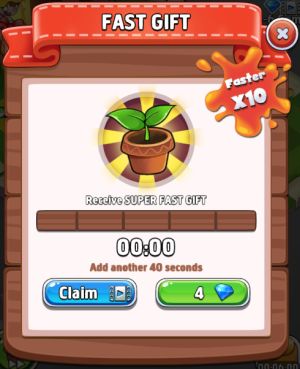 ANGRY PLANTS: Angry plants! That growth formula seems to have been made of jalapeños. This part of the interface gives your plants a speed boost for a short period of time. This effect is not very dramatic – it’s not going to make a lot of difference when used. But sometimes this small boost in speed will help your plants deal the smallest bit of damage left needed to take down a nearly fallen zombie. Use this in a pinch, or as regularly as you want. The choice is yours. 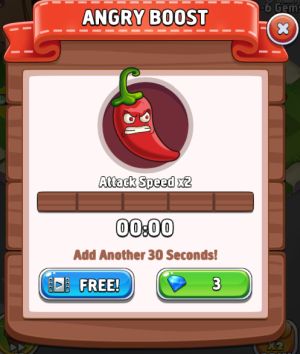 PLANT QUICK BUY: The third on our list is called the Plant Quick Buy button. The plant that you will be able to quick buy is usually a few levels higher than the plant you automatically get on the fifteen second interval. This will then change depending on the highest-leveled plant that you have. One thing to take note of is that the more times you buy a certain plant, the higher the cost of buying that same plant will be the next time around. Let’s talk about small optimizations on that idea later on, but simply clicking this whenever you have enough money will also do the trick.

THE PLANT STORE: The fourth on our list is the plant store. This will be your one-stop-shop the moment that the plant in your quick buy button becomes too expensive. Without having the option to buy the quick buy plant, you can still buy other plants not readily visible to you. To make these plants appear, just click the Plant Store button, and you will have access to all the other plants you have available. Each plant listed on the Plant Store will also have its passive abilities written beside their images. As for now, these passive abilities won’t do much. But later on in the end-game, choosing the plants with the right passive abilities will spell the difference between becoming a successful plant merger and becoming zombie feed. 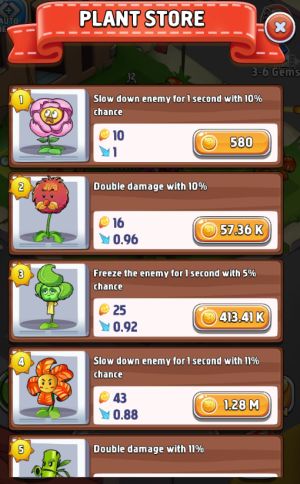 DOUBLE RICH BOOST: Just like the Fast Gift feature, this one is also optional and is not at all needed to progress further into the game. Admittedly, having the option to have double money drops per kill will make your progression much faster. You might consider using this if you need a few more coins to buy that next plant that is delaying your merging and progression. However, if you’re playing actively, this is the kind of boost that you will keep on using. Having more money is always good news for the active player. 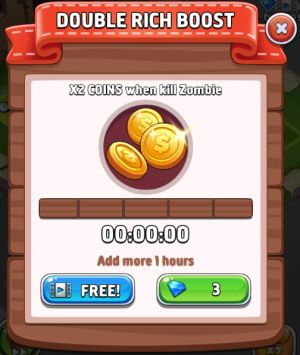 AUTO MERGE: The last one for our interface tour is the Auto Merge feature. We highly recommend you use this when you activate the Fast Gift feature. The two features work hand-in-hand. You won’t have to worry about getting overrun by too much plants in your backyard. When two plants of the same type and level appear, they will automatically be merged (and become a stronger version of the plant). This will clear off land, allowing you to place even more plants. Without Fast Gift activated, Auto Merge is wasted. Make sure to use them together always. 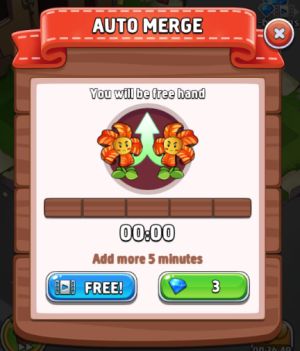 One of the things that you will first notice about the game, excluding the zombies that are waltzing through the side, will be the slots in your back lawn. Limited as they may be, they provide you ample space to get your plants and merge them together.

The game starts with six accessible slots to put your plants in, which will become filled as time passes thanks to the free plants falling from the sky. 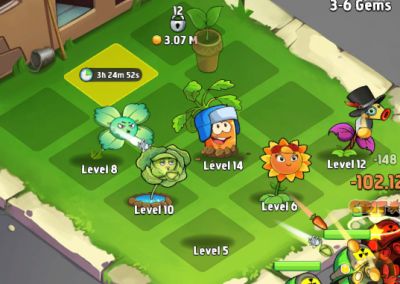 Our main goal now is to unlock the six extra slots. Doing so will give us more space to get more plants. This is easy to do because the unlocks require very minimal resources. Don’t fret about the one plot of land that demands gems since you will eventually get these gems by unlocking higher leveled plants.

The only hurdle that you might experience while unlocking the extra plots of land is the time constraint on each unlock. This time requirement, which is implemented when you unlock via coins and not gems, increases with each subsequent unlock. We knew before playing this game that gardening takes some time – we just thought the wait involves growing the plants themselves, not in preparing the soil.

Anyway, there is no reason for you to keep your low-level plants since they just take up too much space. The higher the level of a plant that you have, the higher damage output they provide. Upgrading a plant will almost double the damage that it deals. Keep this in mind as this will be the main concept of the game.

3. Get More Plants, Here’s How

One thing that you might see floating around your screen, literally, is the plant fairy. She zips from left to right then to the left again on the upper part of your screen before exiting your game entirely. If you miss her, don’t worry. She’ll be back after a few minutes. Try clicking on her before she leaves, though. When you catch her, she’ll give you a bonus in return of watching an ad or by paying her with gems. 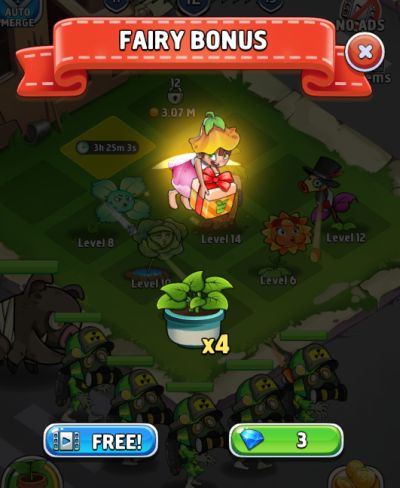 With the fairy’s blessing, you will be instantly granted four plants that are just slightly weaker than the plant in your Quick Buy button. The collective power of these plants is almost always double the plant on your Quick Buy. This small progression is optional and is not necessary but try to grab the opportunity before it flies away!

So, you’re playing Merge Plants actively and have been clicking that Quick Buy button non-stop. Let’s say you now have the option to buy a level seven plant by spending seventy million gold. You stop and look at the amount of gold you are earning from each zombie kill and see that you are only getting about a hundred thousand. You take a step back and reassess. You ask yourself, is this seven million gold plant worth it?

That’s actually a pretty good question and the only way that we can answer that is by opening the Plant Store. After contacting your local florist, you can compare the prices of the plants in the list. Let’s take the next screenshot as an example. 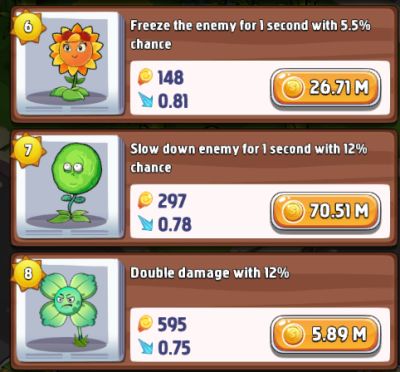 Which one is the most cost-effective purchase?

Let’s dive into some math. Take note that in order to know how many lower leveled plants you need to get a certain leveled plant, then just remember that each level up requires you to merge two of the same plant of the same level. Getting a level two plant needs two level one plants. A level three plant needs two level two plants – or four level one plant – and so on.

Solving might be a little time consuming, but this is one way to optimize the resources that we are given.

This technique should be used if it satisfies these two conditions:

If these steps are too complicated, then you can just buy whatever plants you like, following these steps will let you raise your plants faster in the long run, but it’s not worth the hassle if you start playing around with your calculator more than your smartphone.

5. How To Complete More Levels

Each stage in Merge Plants consists of five levels, although each level except for the fifth is technically the same as the last one. The fifth one pits you against a boss. This zombie boss is bigger and badder than the rest and packs quite a lot of health. This will usually be the time for you to pop that Angry Plants buff to pump up some additional damage. Upon whacking the zombie boss to oblivion, you’ll get a gold reward and you’ll have clearance to go to the next stage and the ability to get even more gold.

Overall, Merge Plants: Zombie Defense is quite an easy game to get into. You can go in the game and just play it casually without optimization and you’d still be able to reach the end game. It’s pretty straightforward and doesn’t really need a lot of introductions or tutorials. 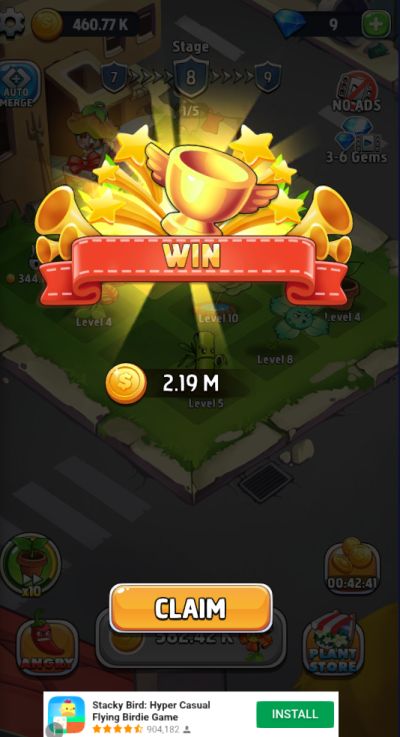 I need harder zombies. Try to put a bucket on their heads, maybe?

The graphics are very child-friendly, although the microtransactions strewn about is something you should be concerned about when letting a child play But hey, it’s a free game, so the developers have to make money somehow using ads and in-game purchases.

Don’t worry if you can’t clear a certain stage and end up failing a boss. You’ll just go back to level one of the stage and you can try again. Just make sure to water… err, upgrade your plants from time to time so you can progress further. Progress is easily found, but just be ready to face some minor setbacks lurking around the corner.

These would be all the tips and tricks that we have come up with Merge Plants: Zombie Defense. If you happen to know additional tips for the game, feel free to let us know below in the comments!

@josef, just use the angry boost