KleptoCats 2 is a unique game from HyperBeard, where your always increasing tribe of house cats travel through portals in order to bring a plethora of varied stuff to your house, with the ultimate goal of completing your collection and unlocking all secrets. It is a sequel to KleptoCats, and as in the first game of the series, KleptoCats 2 is revolving around getting every bit of treasure, a task your cats are responsible for completing.

This game can be pretty addictive, especially for those who play games in order to unlock all achievements because KleptoCats 2 is basically revolving around completing your item collection, which is one huge achievement to unlock, meaning that you won’t put the game down until your cats end up having no more items to bring.

The graphics feature cute semi-pixel art style, and aside from completing your item collection, you are able to get new cats by collecting precious gems (the game’s premium currency). And while having more cats cannot hurt, you will probably want to invest gems in getting coins and allowing you to receive new items at a faster rate, but more on that later.

KleptoCats 2 is one of those games that are all about the journey, perfect for stress relief and for playing it while at work. It asks just a couple of minutes on a daily basis but it gives so much joy and fun. If you’re one of those persons who want to complete their collection fast (but without spending real money) while at the same time unlocking and solving all secrets, stay with us and find out what to do in order for your cats to drag all of the stuff and leave it at your porch.

1. You Shouldn’t Have More Than Three Cats

At the start of KleptoCats 2 you will have two cats, which means you’ll get new items at a reasonable rate, but since the game features many more kitties to unlock, the player can have more than a dozen furballs if they want.

Each new cat asks for more and more purple gems, available each day via daily prizes or obtainable by spending real cash. If you don’t want to spend cash on getting new cats, and if you want to complete your collection faster, we advise you to get just one extra cat, at least until you collect all items. So, spend five gems on getting the third cat and from then on you will be able to send all three of them outside, to bring you new and unique items. Getting a fourth one won’t help you because only three can be sent on fetch assignments at once and even if you could send all four (or more) to get new stuff, you would probably end up not having enough coins for all of them to go outside. You see, sending one at a time is free, the second one costs 100 coins to send and the third one is 180 coins. Meaning that having all three kittens outside, searching for loot, will cost you 280 coins each time you deploy them.

2. Invest Gems In Coins, Instead Of Saving Them To Unlock New Cats

In KleptoCats 2 you receive purple gems via daily prizes and by solving secrets. You also can buy them with real money, but the purpose of this guide is to help you solve secrets and gather items without spending money, so we will presume that all of our readers don’t want to spend real money.

In that case, you should get a new cat once you collect five gems, and from then on you should spend gems on getting coins in order to be able to send all three cats on treasure hunts at the same time. This way you will get treasures at a faster rate and your collection will be completed much faster than in case you spend gems on getting new cats. Since KleptoCats 2 isn’t a game where you can receive duplicates, only puzzle pieces (each cat has its own puzzle that can be completed with getting new pieces) and coins, you are guaranteed to get a new item (in case a cat gets you an item and not coins or a puzzle piece), so investing gems in coins is a viable strategy.

3. Gather Poop And Play Mini-Games To Get Coins

Yes, you read it right. The house will be filled with cat poop every time you enter the game so tap on it since each poop piece gives you two coins. Further, you can get additional coins by playing one of the three mini-games. You can catch fish, play a version of snake in which you guide cat that eats steaks, and you can also go fishing. The fastest way to obtain coins is playing snake. The cat is moving pretty fast and there are lots of stakes around meaning you will receive coins at a pretty fast rate. So, if you need a couple of coins in order to send a cat on a treasure hunt, the best way to earn those is to play snake.

KleptoCats 2 is filled with secrets that, when solved, give you gems. Each room has a couple of those. Some can be solved from the start, and others will ask specific items in order to solve them.

We have a complete list of secrets for each room along with solutions, so read on in order to get some free gems.

Bear in mind that some secrets can be solved on their own, while others ask for specific items. This means that, when we inform you about items you need in order to solve a secret, it means that even if you have the solution, it won’t work until you have all necessary items needed for solving the secret.

The first secret can be solved after you get a safe. The solution is written on the safe and it reads “secrets.” Just type the word in the safe. 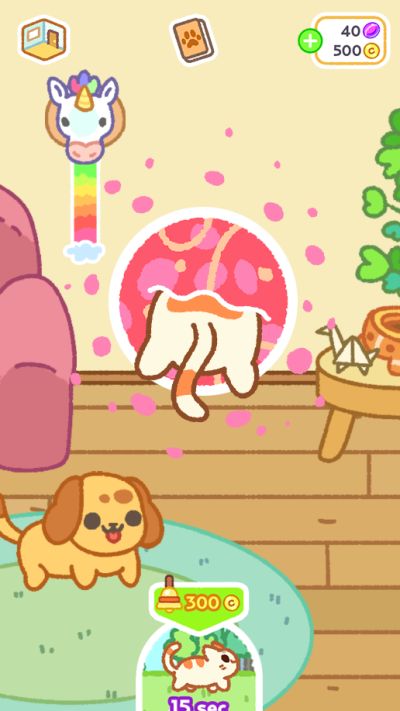 The second secret that gives you one gem can be solved after a cat brings you an ID card that reads DR on it. You’ll notice dots on it, it is actually a secret word written in Braille alphabet and it reads cat. So, in order to solve the second puzzle just enter “dr.cat” (along with the dot) in the safe combination.

And in order to solve the third secret, you have to obtain two items. The first one is a light switch that will allow you to turn down the light in the shed. Once you turn down light in the shed you will notice a group of symbols appearing on the lamp on the ceiling. The order is: left, up, down, down, up, left. Next, if you have a jar of red gemstones in it, just tap on it and it will open a menu. Each red gemstone corresponds to one direction (up, down, left, and right). Just figure out which stone equals which direction and then just enter tap the stone in the correct order we shown you above. This will give you a special purple ribbon for the shed, but sadly it won’t give you any purple gem.

The patio has four secrets that give gems for solving them and one purple ribbon special secret.

The first secret that can be solved right from the start (no item requirements) ask you to enter “Popocatepetl” as the safe combination (just click on the safe icon inside the room menu). Coordinates on Popocatepetl (a volcano located in Mexico) show up when you take a screenshot while you are at Patio, but they are pretty hard to spot. Instead of trying to spot them, just enter the code and receive one free gem. 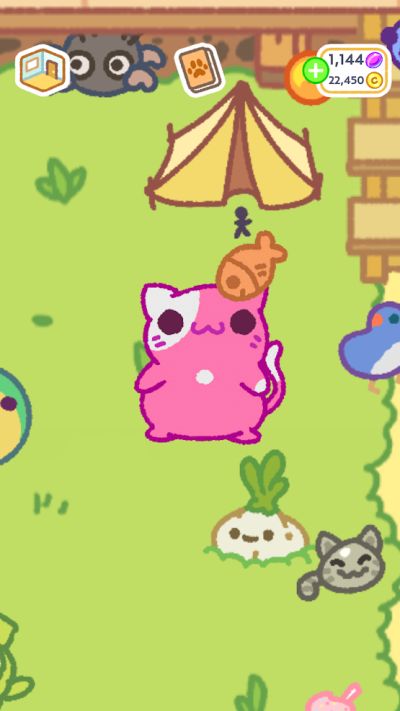 Next secret asks for a specific item. One of your cats should bring you a Tamagotchi. On its display, you will see a familiar emote: (=OwO=). Just enter the emote in the safe (use letter O instead of zero) and that’s it.

And the final one that gives you a blue ribbon involves a picture of flowers that can be found on the wall on the far left side on the Patio and one special item that looks like two purple cat heads that are placed on the bush next to the wall where flowers can be found.

As you can see, flowers are placed on lines that look like a music staff. And they are indeed notes, but all you have to remember is colors of those flowers. Once a cat brings you an item that looks like two purple cat heads tap it and it will open a new menu where can tap on five singing cat heads, each being of different color. In order to solve the final Patio secret, you should tap on singing heads in this order: purple, blue, green, red, orange, green.

Once you activate the singing heads in the right order a shard will appear in Patio’s pond, it will sing a short song and you will get a purple ribbon for the Patio. Now you have solutions for all Patio secrets!

And finally, we have the Lobby, which also is filled with secrets.

The first secret, which can be solved without any specific item can be found on the wall on the upper right side of the Lobby. You will notice a bunch of lines and dots, representing a code written in Morse code. When transformed into letters, it spells “the master comes.” Just enter in into safe (by clicking on the safe icon in the Lobby menu). 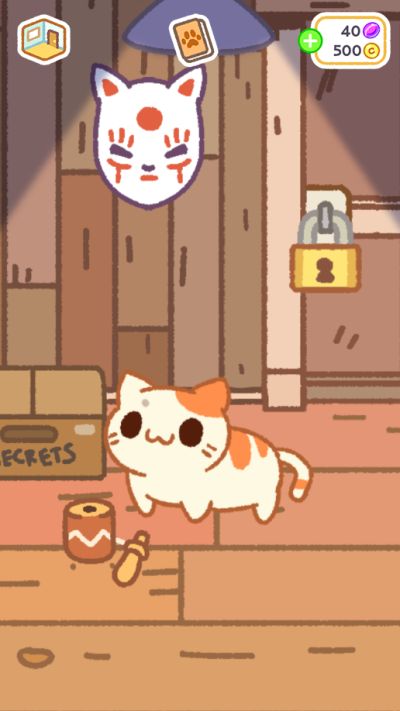 The next secret asks for two items to have – a bus ticket and a coffee mug. The two combined spell 20-055 and in order to solve the secret you need to enter the numbers (along with the dash) inside the safe.

In order to solve the third Lobby secret, you one of your KleptoCats has to bring you a newspaper that reads “where he at?” on the front page, along with a picture of a cute dog underneath the title. The solution hides just under the title and is written in Braille. After you decode it, it reads “he here,” and this should be entered in the safe. Here’s another purple gem for you!

And the final Lobby secret that gives you a purple gem can be solved once you get your hands on the telephone. You will see a code that, once decoded spells “This is not real.” All you have to do is to enter the code in the safe and that’s it!

And the final secret, the one that gives you a purple ribbon for the Lobby, asks for two specific items. The first one is a letter that, once tapped shows a list of items along with numerals next to them. And the second one is a cooking pot that, once tapped on, shows you a menu filled with various alchemy items.

In order to unlock the final secret, you have to combine the two items. First off, look at the list found in the letter, this is the sequence of items that should be tapped on once you tap into the cooking pot. The problem is that the final three items cannot be figured out easily, but we have the right combination, so no worries. Next, once you open the cooking pot menu, tap on these items: eyeballs, claw, mushroom, yellow gemstone, blue plant, and claw again. This will activate a sequence in which you’ll see a witch cat that stirs the pot and cooks something nasty, along with unlocking the purple ribbon for the Lobby!

And that were solutions for all secrets that can be found in KleptoCats 2, just remember that some ask specific items to be obtained before you can solve them.
Okay, folks, that’s all for now. We hope this guide helped you to complete your KleptoCats 2 items collection and to solve all secrets hidden in the game. Thanks for reading and happy gaming!