There is no knight in shining armor in this story. Kingdom Rush is about the return and rise to power of the almighty wizard, Vez’nan. Ironhide Game Studio’s brand new mobile game Kingdom Rush Vengeance puts a twist in the typical epic tower defense by putting you in the shoes of the bad guy. Your goal is to build your dark army and show the kingdom who their true ruler is. Spread terror across the once-peaceful kingdom as you face off against mighty empires and equally powerful Bosses.

There are three Kings for you to take down as you expand your influence in their respective territories. You will have to overcome 16 challenging stages if you want to become the ultimate evil ruler. Choose the best combination of towers and heroes in order to achieve victory. If you need help in winning any of your battles, just check out our Kingdom Rush Vengeance beginner’s guide for some useful tips, cheats and strategies below! 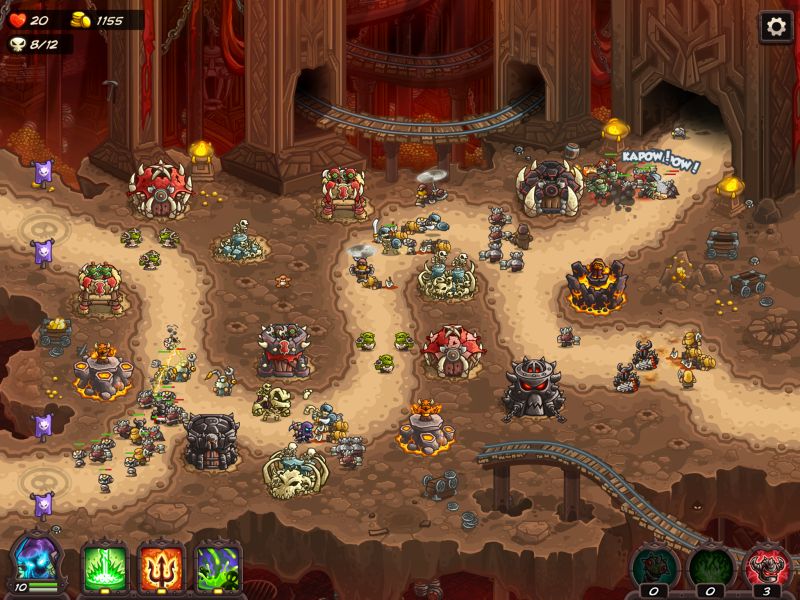 In Kingdom Rush Vengeance simply spamming your enemy with attacks will not get your far. You need to maximize the use of each wave in order to keep winning battles. To do so, you will have to find out what you are up against. Luckily, you have the skull icon for that. Check out the skull icon before deciding on which units to use. This will tell you what kind of enemies will be coming up next. The game is also nice enough to give you detailed information whenever you encounter an enemy for the first time

When plopping down units, make sure you find the optimal position for each one. Look for the best spots where they can work together in order to overwhelm the opponent. Place your melee barracks near your ranged towers. Doing so will allow your ranged towers to fire away at incoming opponents while your melee units deal with anyone who get through. You can then send in some Demon Goonies to take care of stragglers who managed to slink away from your front lines.

The towers that you put down may be sold at any point of the stage. You might be afraid to do this because of the gold loss, but sometimes this is the best course of action. Leaving a tower in a position that is no longer useful may be a bigger waste than just selling it off and buying a new one. For example, when you reach the final waves of the game, you might notice that the enemy types can now easily break through your front lines. If you invested heavily up front, you would have very little troops near the exit goal. Instead of waiting to earn enough money to build new towers, you can effectively reposition your units by selling off the ones you don’t need and investing the money in more units near the goal.

If you are wondering what to put down near the end goal, powerful melee units should always be your priority. Use the ranged and melee combination near the start and middle sections of the stages, so they can whittle down the enemy numbers and leave just enough for your stronger melee units to finish off before they get to the end goal.

Upgrading a tower instantly creates a wave of upgraded units on the battlefield. Keep this in mind when trying to trample your opponents. It is best if you time your upgrades just as a wave leaves the tower. This way, you will have another wave following the initial wave, making it difficult for your opponents to deal with all of them at once. Save this move for later parts of a stage in order to secure your victory. 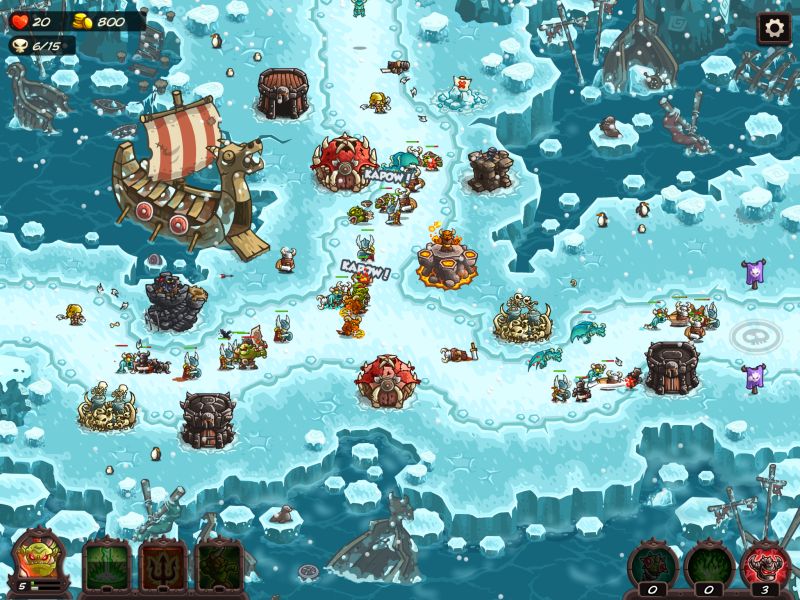 As you progress in Kingdom Rush Vengeance, you will start encountering stages where there are multiple spawn points for enemies. Instead of spreading your resources thin by assigning troops at every spawn point, find where the paths of the enemies converge. You can then set up heavier defenses in that area to slow down their progress and wipe them all out. Orcs are useful at slowing down enemies while your ranged units fire away.

Even though the game offers up information on new enemies, there will come a point where it will be hard to keep track of all of them. When you can’t seem to remember what an enemy unit does, or what it is good at, just tap on it. Tapping on any unit will allow you to view its information, strengths, and weaknesses. Do not hesitate to review enemy information before putting down new towers.

7. Use Your Power Ups Wisely

Kingdom Rush Vengeance allows you to bring up to three power ups into battle. Make sure you use them wisely because you need to purchase them with gems. While you are free to bring any power up you like, it is usually a good idea to take two damage-dealing ones and another that gives you some kind of stat boost. Avoid spamming your power ups just because there are plenty of opponents. Save them until the later parts of a stage to ensure that they are used for the most powerful enemy waves.

8. Play The Other Modes For Rewards

When you beat a stage for the first time, you will be able to unlock the Heroic and Iron versions for it. Beating the stage in these modes will reward you with gems that can be used for purchasing even more power ups. The Heroic stage will have you overcome several Elite Waves with just a single Life Total. The Iron stage, on the other hand, makes you deal with just one Elite Wave, also with just one Life Total. The primary difference is that you can only use the pre-set Tower setups. Make sure you upgrade the towers included in the pre-sets before taking on the Iron Challenge to increase your chances of success.

9. Stay On Top Of Your Upgrades 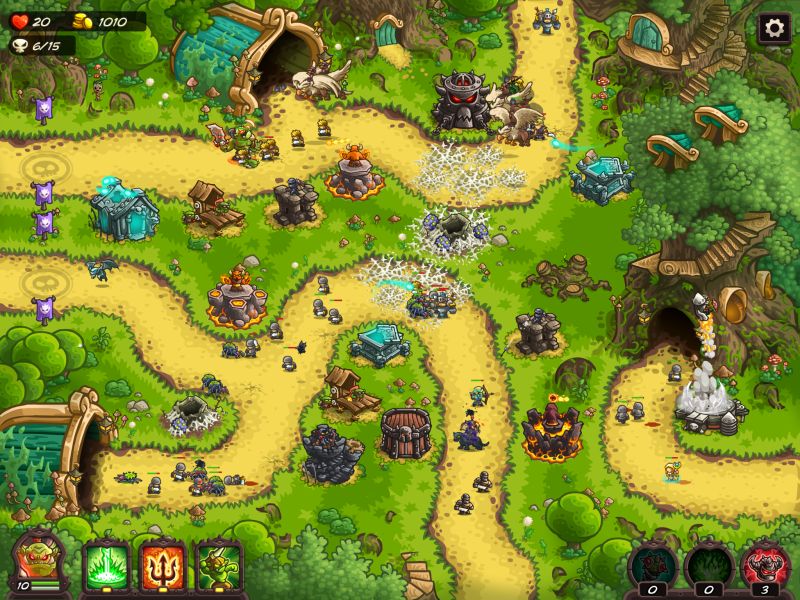 There are two types of upgrades in the game. The first one is for upgrading your power ups and it costs Souls. Souls can be acquired by simply playing through the campaign stages, so just keep progressing until you have enough. When purchasing upgrades, focus on the ones in the second tier. You can then use up your Souls for the first, third, and fourth tiers. Choose just one of the upgrades in a given tier before moving on to the next one to avoid focusing too much in a single tier.

The second type of upgrade is for your heroes’ abilities. You will need to spend Hero Points for this type of upgrade, and you can only acquire it by leveling up your heroes. For both types of upgrades, make sure you spread them out to ensure that you have a well-rounded team after investing your hard-earned points.

10. When To Use Your Abilities

Now that you have upgraded your abilities, you should know better than to waste them. Using abilities at the right time can help turn the tides of battle. For example, if you use your abilities to send out drones like Demon Goonies, you should keep in mind that their damage output isn’t that great. Use them to chase after weakened enemies or upgrade them so they will explode when they die. You can also combine Demon Goonies with your Soul Impact ability in order to wipe out large hordes of enemies. Study each ability carefully and find a way to maximize its use in battle.

Why would you want to summon enemies, you ask? If you are confident in your ability to wipe out the next wave, you can tap on the skull icon to summon them early. This is not just for showing off, though. Doing so will reward you with extra gold that you can spend towards strengthening your forces in preparation for the more difficult waves. Don’t worry because you will know what the next wave of enemies will be, so it should be easy enough to determine whether or not you are ready to take them on. 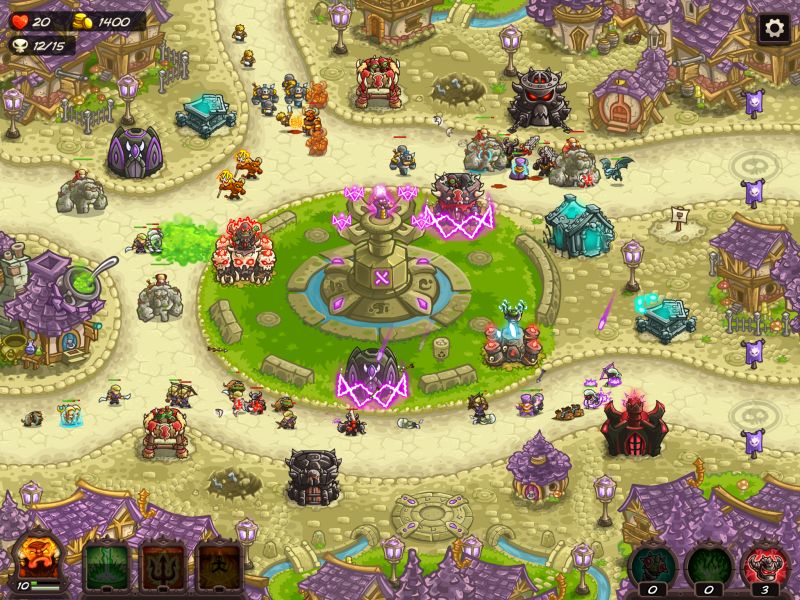 There are several slots on the map that can be equipped with towers. You also have 16 different towers to choose from for filling up these slots. Try out different combinations of towers to see which ones work best with your play style. When you are starting out, you can settle for three ranged towers and two towers with melee troops. Later on, once you have access to all of the towers, you can try out the Orc Shaman, Spectres Mausoleum, Melting Furnace, Bone Flingers, and Elite Harassers. There are other combinations out there and it is up to you to find your favorites!

One of the best ways to get more gems in Kingdom Rush Vengeance is by completing achievements. These are milestones that you reach within the game. The more difficult it is to reach that milestone, the more gems you get as a reward. Achievements include killing a certain number of enemies, reaching specific levels with a character, selling a number of towers, and so on. Make sure you regularly check the list of achievements, so you know which ones you can work towards accomplishing right away.

A dark wizard’s journey is not as easy as everyone thinks. Make sure you rely on our Kingdom Rush Vengeance tips, cheats and strategies to ensure your victory in every battle! Do you know any other tips or tricks for the game? If so let us know in the comment section below!