INKS is a brand new game from State of Play Games, that’s described as “pinball for a new generation.” Not only do you get pinball mechanics you may know from the actual machines, you also get “skillful tactical challenges,” as well as a chance to create some “wondrous” works of art by firing the ball across the canvas, hence the name of the game. You’ll be firing off vivid bursts of color on the canvas as you keep on playing, with the game recording a visual history of your play-through across more than 100 unique tables. But there’s also the goal of reaching an impressive level rating in mind, and that’s what you probably want to do, above focusing on the artwork aspect of the game.

This is quite a unique and interesting casual game, and that means there are aspects of the game that may be a bit too challenging for new players. That being said, we’ve compiled a list of INKS tips and tricks that can help you improve on your level rating. That’s pretty much the only thing you should bed shooting for in earnest, so read on and improve your game the next time you play a level or two!

1. There’s No Condition For Losing

Almost every mobile game has situations where you can lose, get killed, or end up in any other situation that translates to these two dreaded words — “game over.” That’s not the case in INKS — you will be scored based on performance, but otherwise, there’s no timer to deal with, and no limit to the number of balls you can use. That means you’ve got all the resources in the world needed to pass a level. Furthermore, the game makes all the levels available after you’ve completed the tutorial stage. That allows you to jump from one level to another, especially if you’re having difficulty in one of them, instead of having to complete each level in order.

2. How Can You Tell Your Level Rating?

It all boils down to the color of the ball; you start out with a gold ball, and it’s your objective to finish each level with that ball still retaining the same color. Doing so will get you as rating of “1,” and you will also receive a star if you complete a level in the fewest possible moves. Losing a ball, which could happen if the ball reaches the bottom or enters a vortex, would mean you get a silver star and a rating of “2.” (Lower ratings are better in this game, quite obviously.) Lose yet another ball and your rating will go down to 3, with a copper ball replacing the silver one.

Now if you lose all three balls, each respawn will have you using a black ball. You won’t be ranked if you’re left using the black balls, and if you complete a level with a black ball, that’s simply that — you get no ranking, and all you get is a designation stating you completed the level. But the good thing is that you can replay levels at any time if you want to improve your level ranking. Furthermore, you will always hold on to your highest rank even if you replay a level and get a lower rating than your all-time best.

3. You May Have To Choose An Optimal Side To Start On

This is what you may have been waiting for — some actual tips on how to get the best possible rating. And it’s easy to get that coveted “1” rating with a little practice. Take note that the side you tap on at the start of the level, or each time a new ball spawns, would be the basis of which flipper the ball is sent to. It’s all up to you as to whether you want to tap on the left or the right side of the screen, but there are some stages where you really need to choose the correct side to tap on. For example, there’s the fifth and sixth levels on the Dawn pack, where you need to watch out for the vortex on one side of the table. That vortex will draw in any balls that come near it, so you should tap on the opposite side of the vortex to prevent it from getting sucked in.

One interesting thing about play-throughs is that you will see a thin trail of paint once your ball makes its way through paint splashes. You can use this trail to show you where the ball will go if you hit it at specific points. So if you see a trail moving from the end of a flipper to one corner of the table, you will see that hitting the ball at that point will send it to the corner in question. It’s almost like the Precision power-up, which we will be talking about in our very next tip, but you don’t get the same additional benefits aside from the clues to the ball’s path.

In addition, the black ball has its own trail at the start of a level, which could be instrumental if you’re struggling to complete a level, especially the more challenging ones that don’t have a lot of paint for you to work with.

5. About Power-Ups And How They Work

INKS comes with some power-ups that could help you achieve a higher rating in the levels. For starters, you’ve got the Stopper, which blocks the bottom of the board in such a way that your ball cannot fall into the center hole. This always works if the flippers are down, but there’s a chance the ball could pass through the opening between the Stopper power-up and the flipper. Be very careful when tapping the screen as the ball is descending. The Precision power-up helps you by showing you the exact trajectory of a ball if you choose to tap on it. It also assists by greatly slowing down the ball, which should help you tap at the right moment and make the right move. Take note that the ball will still be moving normally around the board, and that it will only slow down once it’s within the range of either one of the flippers. You will still have to hit the ball before it falls into a hole if it’s headed there, so don’t expect this power-up to spoon-feed you all the way. It buys you more time and gives you an idea of your ball’s path, but aside from that, everything else is on you.

6. How To Buy More Power-Ups

Once you’ve unlocked the power-up feature in the game, you will start earning Credits, which are represented by a lightning bolt, and earned based on how you perform during the levels — that’s 10 credits for a star, five credits for a “1” rating, three credits for a “2” rating, and one credit for a “3” rating. As expected, the Precision power-up is more expensive, costing you 30 credits each and lasting you the entire level, and the Stopper power-up costs 15 credits, also good for one whole level play-through. It’s important to note this one-play-through limitation, because if you buy a power-up for a level then replay it, you won’t actually have any power-ups to use in the replay, and will need to buy them again if you want to benefit from them again.

The game will allow you to replay previous levels to earn more credits, but the catch here is that you will only earn credits in a replay if you get a higher level rating than your previous best. So if you got a “3” and one credit in your first play-through, you won’t earn another one-credit reward if you get another “3” — you need to get a “2” or better. 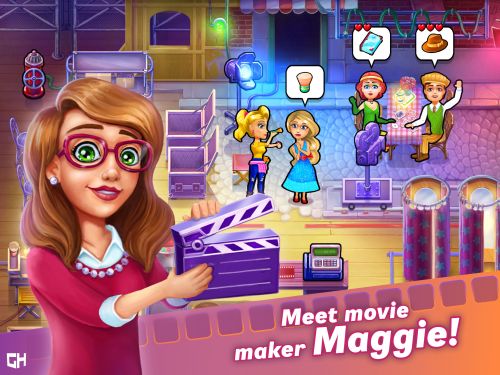