Hyperball is a wacky new action title from Good Job Games, a developer that’s responsible for a number of addictive mobile games, such as Color Bump 3D and Spinner.io to name a few. In a nutshell, Hyperball is a football game where you try to score goals by sending the ball into the opposing team’s net. The twist is that you get to do all that while driving a car. You will need to score more goals than your opponent before the time is up. In this article we will provide you a bunch of Hyperball cheats, tips and tricks, so make sure you read on!

Of course, you will also have to keep the opposing team from scoring in order to secure your lead. You can play against the game’s AI or go into multiplayer mode where you will have to compete against players from around the world. Make sure you don’t end up sending the ball into your own goal, though. The mechanics of the game are simple enough, but scoring is easier said than done. Don’t forget to read our Hyperball cheats, tips and tricks below before heading out onto the field! 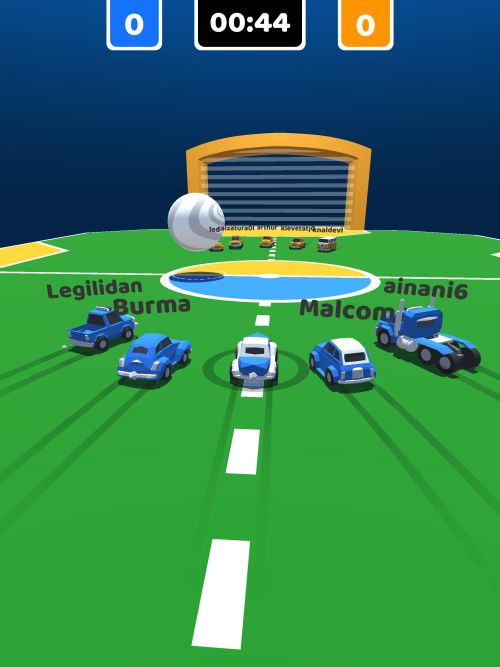 One of the biggest challenges in Hyperball controlling your car. Mastering the controls is essential if you want to keep scoring, especially if you are playing against other people. To move slowly, you can hold your finger on the screen. Slower movements are easier to control and are more precise. If you want to dash towards a certain direction, just quickly release your finger from the screen. Dashes are useful for closing in on opponents, blocking goals, or even running away with the ball. Just be careful when dashing because it will send the ball flying and you may end up sending it into your own goal.

It may sound counter intuitive but shooting directly at the opponent’s goal will most likely end in failure. Instead of aiming at it, you should try to shoot at an angle. The game’s physics can be pretty accurate when it comes to bouncing off walls, so you would be able to tell at what angle you should be shooting. If you aim directly at your opponent’s goal, you would most likely end up hitting the bar. Worse, the ball could bounce straight towards your goal when this happens. Of course, you could try the opposite by aiming at your own goal, hitting your own bar, then having the ball bounce off towards the opponent’s goal. That is a bit riskier than making it bounce off the walls, though.

A good way to score a goal without any risk of having the ball bounce the wrong way is to simply drive it directly into the net. It takes a bit more work since the longer you have the ball with you, the more difficult it will be to keep the other team from stealing it from you. At least you won’t have to worry about angles and balls going out of control.

3. Best Offense Is A Good Defense

No matter how many times you score a goal, you will still lose if you keep letting the opponent score. Make sure you do not let the ball go anywhere near your own goal. Don’t wait until the ball is within shooting range of the net. It will be a lot more difficult to defend once the ball gets too close. On top of that, you have inept AI teammates that will most likely fumble and accidentally shoot the ball into your own net. Don’t rely on them and defend early. You will only need a single goal if you manage to keep the opposing team at zero.

Since you will most likely have the best common sense on your team full of rookie AI, it is better if you focus on defense. No matter how inept your AI teammates are, they will eventually get lucky and score. Just stand back and knock off any attempts of the opposing team to send the ball into your net. Of course, if you do get an opportunity to score without leaving your own net vulnerable, feel free to take advantage of it.

4. How To Make Sharp Turns

Running straight will make you vulnerable because other players will be able to anticipate your movements. If you have people chasing you, or you feel like you will get blocked off, you should make a sharp turn to throw off your opponent. The easiest way to do this is to make a quick flicking motion with your thumb. Your car will make a sharp turn and you will be able to steer away from your opponents. This is also a good trick to use if you want to get a clear shot at the goal. 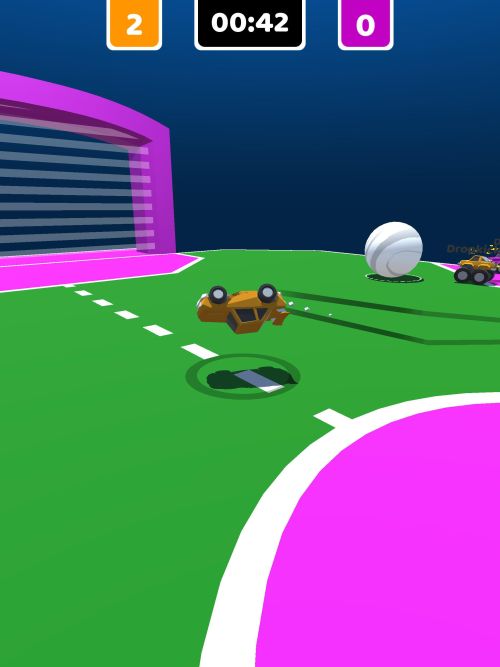 A great thing about Hyperball is that you can get away with playing a little dirty. By that we mean you can rough up your opponents a bit to keep them from getting the ball. If you are having trouble securing the ball for yourself, or you see an opponent chasing your teammate, you can actually knock them out of their path by nudging them. You can also send them a bit further away by using the shooting motion on them. It’s really effective in keeping the ball with your team.

The game gives you the option to switch to a different car. Unfortunately, the cars in this game are purely cosmetic and offer nothing in terms of gameplay. On the plus side, that means you are also free to choose whichever skin you like since it won’t give you any disadvantage. There are five cars available for you to unlock. As of this writing, the only way to access them is through the VIP membership. You can take advantage of the free three-day trial of the VIP package but make sure you cancel before the third day ends.

If you are the type of player who likes customization options but do not want to spend real money on VIP membership, you can settle for changing your team colors. Doing so will change the color of your car and your goal. Both these options can be done for free. Just tap on the jersey button and it will cycle through a few color combinations. Just keep tapping on it until you find what you like.

Hyperball can be played offline but only up to a certain extent. If you complete the game while offline, the match will just end, and you will start over on the same level. Unless you feel like practicing on the same level over and over, it’s really not much fun to do. You will only be able to move on to the next level once you are connected to the internet. Make sure you have a stable connection to avoid wasting your efforts in winning a match.

It is time to take football to the next level by driving around in Hyperball! Make sure you use all the tips, cheats and tricks listed above and you will be scoring goals like a pro! If you have anything to add, feel free to drop us a line in the comment area below!