One of the most popular simulation games on Steam, Stardew Valley, has finally arrived to iOS devices. The game is now available on the App Store for $7.99. Fans of the original game will be glad to know that the iOS release is a full version that plays nearly the same way as the original. The only major difference is that it has been optimized for mobile devices with the addition of touch-based controls. 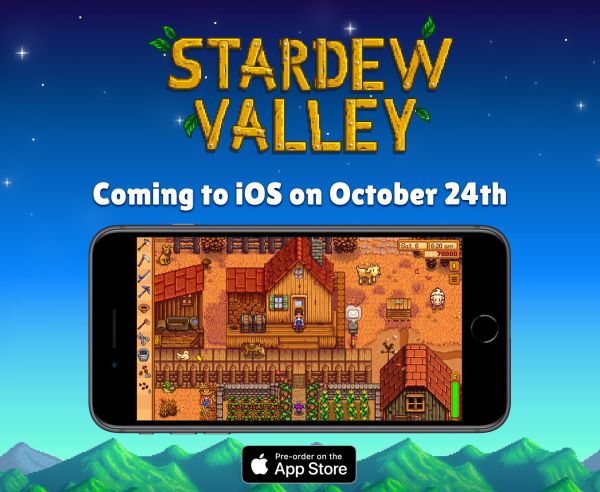 For those who are new to the game, Stardew Valley is a farming simulation RPG that has been largely inspired by the SNES game Harvest Moon. Players enter the game as an ordinary guy who inherited a small farm. They will then have to plant crops, raise animals, and manufacture goods in order to bring life back into the farm. The farm expands by clearing more land as the game progresses.

Unlike social media farming games that have become rampant in recent years, Stardew Valley, has RPG elements where players get to explore the entire village and neighboring areas. There is also a combat system that allows players to fight off monsters. Players can choose between manual and auto combat, giving them full control over when they want to engage the enemies. Managing relationships with townspeople is also part of the gameplay mechanic. There never really is a dull moment in the game. In fact, most people would find themselves not having enough time to do everything they want to do.

This is where strategy comes in. There is only so much time in each day. Players will need to strategically plant their crops to ensure maximum profit while minimizing the time spent tending to them each day. Time management plays a key role since there is a whole list of other items to gather, including ores, fish, mushrooms, and so on.

Those who have already established their own farms in the PC or Mac versions need not worry. They can transfer their progress to the iOS version, so they can continue their progress on the go. Players will also be glad to know that there are no in-app purchases, which means they get the full game in one go. The only feature that will really be missed is the multiplayer option. Other than that, the iOS release does everything all the other versions can do.