Famous historic battles and well-known generals await you in the sixth installment of the European War series, and players will be delighted by the quality of European War 6:1804 developed by Easy Tech. The graphics and the mechanics of this turn-based strategy will remind you of the classics such as The Age of Empires or Civilization, and there is no doubt that European War 6:1804 can provide you with hours of entertainment.

The level of your capital city is a major factor in the gameplay of European War 6:1804, and we advise players to always start the mission by upgrading the levels of their buildings and structures. By doing so, the production of goods and experience points will increase, which will allow you to create more army units since you will be having more gold. 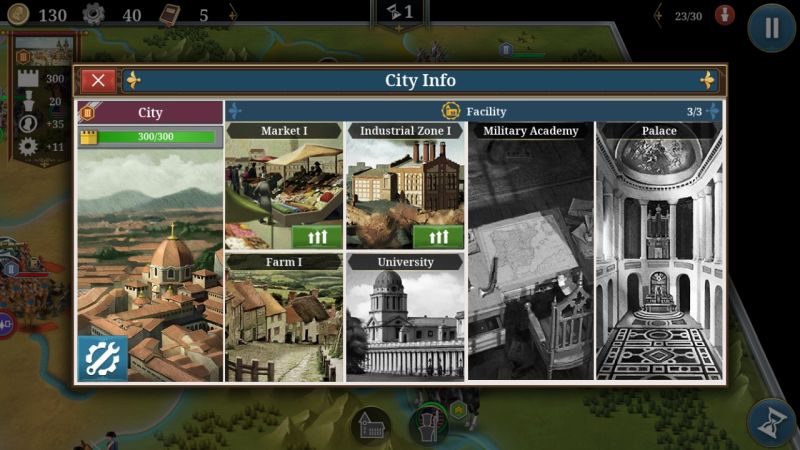 By clicking on the city in question, the players will see an overview of their city’s main elements such as markets, industries, military academies, and so on. If any of those buildings have a small green square with three arrows pointing upwards – you can upgrade this building. Upgraded buildings will bring a lot of benefits, such as improved yield of gold, but they will also allow you to train more units and the overall population limit of your cities will increase.

Also, the cities have an additional menu which is called ‘national technology’, and the players should always explore this section. If there is an opportunity for an upgrade – do it immediately, and your troops will soon notice the difference.

2. Assign A General To Your Troops

As we already mentioned, a plethora of famous generals are available in European War 6:1804, but you will have to complete missions to unlock their characters. At the very start of the Campaign mode, the players will have two generals on their disposal – Clinton and Jourdan. Later on, a number of marshals and barons will be available, and the players will have the opportunity to boost the strength of their troops by assigning an experienced warrior to command those units. 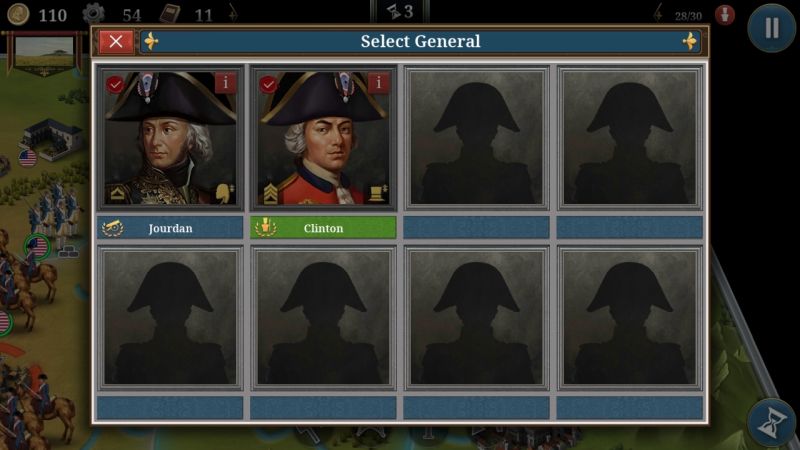 The importance of generals is immense, and they often mean the difference between life and death out in the battlefield. Commanders boost the statistics of your units, i.e. the stats for attacking and defending will significantly increase once you assign a general to the brigade in question.

The process of assigning a commander of the unit is pretty straightforward, and you only need to move your troops away from a city. Once they arrive onto an open terrain, you will see an icon which resembles a hat in the bottom of the screen. By clicking this icon, you will be taken to ‘ Select General’ menu, and then you only need to pick the best military expert to lead your troops to victory.

3. Power Up Your Generals

Since the leaders of your forces are so important, it would be wise to invest some gold into powering up those same generals. Luckily, European War 6:1804 allows for a convenient and hassle-free way in which you can upgrade the stats of your commanders. In other words, the likes of Grant, Suvorov, Nelson, and many others can become even more powerful and respected if you upgrade their characteristics.

There are several ways by which players can enhance the stats of their generals, and one of those ways is by increasing the rank of the commander in question. There are numerous ranks you can choose from – starting off from a major, captain, lieutenant, and all the way up to the generals and marshals, respectively.

On the other hand, the players can also upgrade the actual title of the commander. The titles have an effect on your troop’s morale and strength, and they range from a viscount, count, and marquess, all the way to a duke or even a prince!

4. Invest In Training Your Troops

As we all know, professional soldiers spend a lot of time crafting their skills and practicing their fighting abilities, and the same applies to fighters available in European War 6:1804. In order to train your units, i.e. to enhance their statistics and power, you need to visit the ‘Training Skills’ section. The icon in the bottom of the screen will take you there, and an abundance of options will await the players who visit this menu. 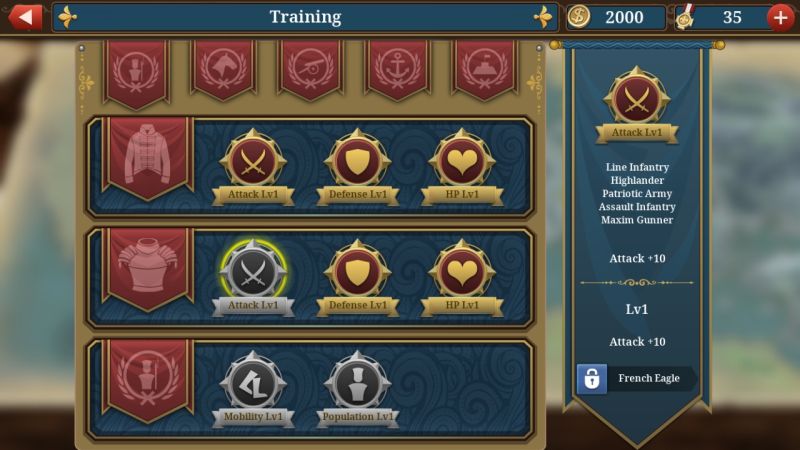 The skills are divided according to the category of your troops, which means that the cards on the top allow you to change the class of the particular unit which requires training. The types of troops available in European War 6:1804 are infantry, cavalry, artillery, naval forces, and forts.

By investing the in-game currencies, i.e. gold and respect points, the players can purchase new skills for their battalions. The skills will be assigned to the troops automatically, and the next time you encounter the enemy – your soldiers will prove to be a much tougher nut to crack. Additionally, trained troops will allow you to complete challenging missions in different modes in the game.

5. Use Artillery To Lay A Siege

When it comes to the actual gameplay of European War 6:1804, there are several useful techniques which you can apply which will enable you to overcome the enemy easily. For instance, the siege of a city can turn into a long and arduous process if you attempt to take over the city by only using the infantry units. Even the cavalry will have problems defeating the enemies who will have a ‘higher’ ground by staying within their fortified positions.

Because of this, we advise the players to invest in buying a couple of cannons. These artillery units can bombard the enemy from a distance, and the barrage can take down even the most fortified of cities. However, the artillery is notorious for its low mobility, and the players should always keep that in mind.

The enemy garrisons may be tough, but a siege from heavy artillery is the Achilles heel of every city in European War 6:1804, and that is why all players should explore the benefits of this type of units.

A lot of fighting in European War 6:1806 will take place out in the open field, and your infantry units could be vulnerable to attacks from cavalry or artillery. Luckily, there is a simple solution which can help during those moments, and it can even help you win the encounter in most cases. 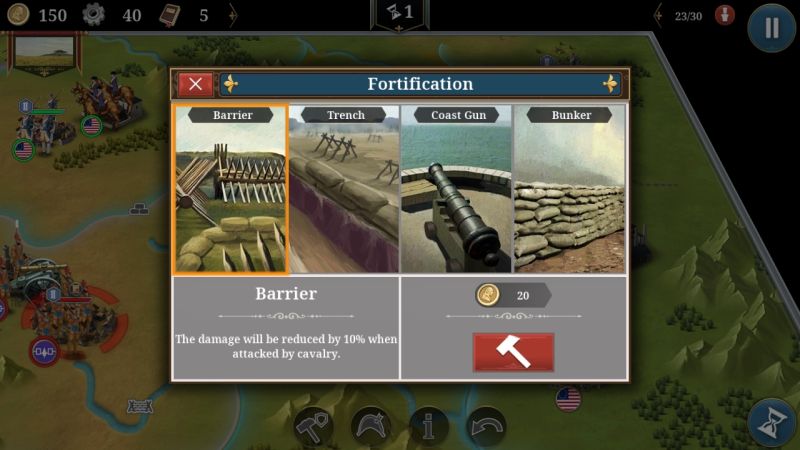 What you need to do is to fortify your position, and this can be done by setting up barriers or bunkers, or by digging up trenches. For instance, the enemy cavalry will have a hard time facing barbed wire fence around your trenches! Furthermore, the game also allows the use of coastal guns, and these can be of great help during naval battles. All of these fortifications will decrease the damage your troops will sustain during combat, and that is why we advise the players to use them as much as possible.

However, the barriers and trenches do not come for free, and a small amount of gold will be deducted off of your account every time you want to stand your ground and prevent the enemy from advancing forward.

European War 6:1804 is all about strategic thinking and tactics, and you need to make smart moves if you want to come out victorious out of every battle. For instance, money is often scarce in the initial stages of the game, and you will not be able to afford as many troops as you would like. That is why we suggest saving money for more advanced troops and buying only the top of the crop.

If we use infantry as an example, the players will notice the difference in the price of ordinary militia and a unit of grenadiers. The militia may be cheaper, but at the same time – these troops will not cause much harm to the enemy. The HP of these ‘weaker’ units gets depleted quite rapidly since their defensive stats are pretty low. On the other hand, a group of riflemen or grenadier will be more expensive, but if you choose to invest in these forces – you will have an elite band of soldiers at your disposal.

The same rule can be applied to all other categories of troops in European War 6:1804, and that is why players should plan their course of action to perfection.

8. Transport Your Troops By Sea

In many of the missions and quests in European War 6:1804, players will have access to the sea, and this presents a significant advantage when it comes to the transportation of your units. Intermediate and advanced players are probably aware of the fact that the units they control can often be slow and sluggish when it comes to movement, and that is why sea allows for faster access to your targets. 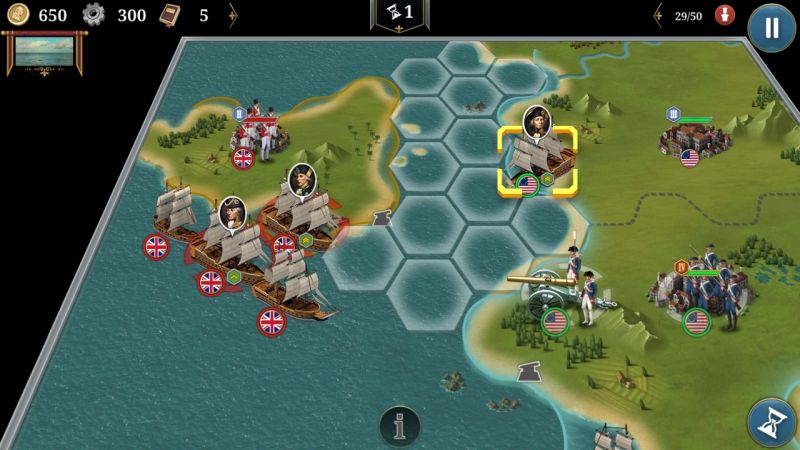 If you want to get your infantry, cavalry, or even artillery onto a boat, you need to get them close to the sea, i.e. within range of their allowed movement circle. After that, you only need to click on the field that is in the water, and voila – your troops have embarked on a sailboat.

Admittedly, these boats are relatively weak when compared to specialized naval units, such as a frigate or a corvette. However, they can still sink an enemy ship here and there, and most importantly – your troops will cross the water and you can deploy them on land once they reach the shore.

Aside from the Campaign mode, which is the primary segment of the game, European War 6:1804 offers several other playing modes. For example, the Conquest mode offers a lot of possibilities, and players should definitely check this option. 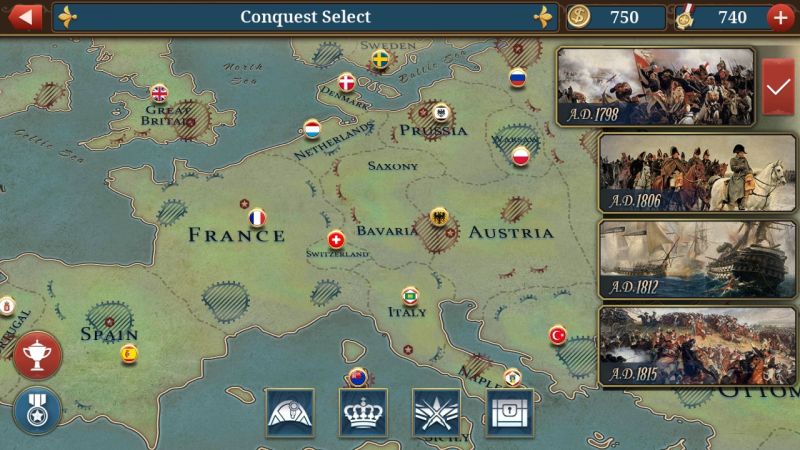 The Conquest will take you to the European continent torn by wars and conflicts. As a matter of fact, the players can choose from four different periods, and all of these will offer different borders and countries. All of these historical periods have one thing in common – you will have a chance to recreate the map of Europe and to expand your empire to unseen levels.

However, the Conquest will require a lot of diplomacy, and players need to know how to interact with other players and how to offer them a proper incentive. In other words, you are free to form alliances or declare war as you see fit, but, you need to be careful and use the proper strategies against different enemies.

10. Beat The Clock In Challenge Mode

Since the Conquest mode can be played indefinitely, some players could be in need of something faster. The creators of European War 6:1804 have thought about that, too, and they added the Challenge mode to the game. As the name clearly suggests, this mode will challenge your strategic skills, and you need to plan every single move if you want to progress onto the next level. 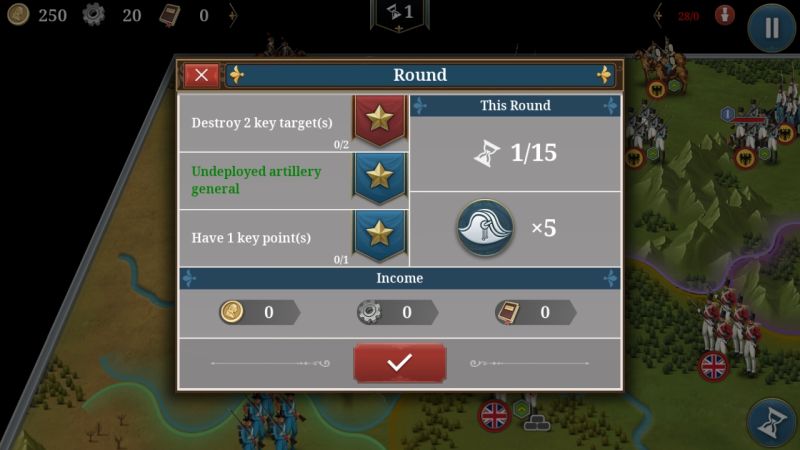 The concept of the Challenge mode is based on a limited number of turns which is given to the player. A small sand clock at the top of the screen is always there to remind the players on which move they are now. If you fail to achieve either one of the three tasks which are required – you will not be able to move onto the next level. However, if you do manage to complete the quest in a given number of turns – you will often unlock the generals and other rewards.

With the final tip on our 10-point checklist, we conclude our European War 6:1804 tips and tricks guide. Hopefully, our overview of the most important tactics and techniques will make it easier for you to win every mission. If you have any other strategies which can be of use – don’t hesitate to drop them in the comment section below!