Halloween does not end with October as far as Disney is concerned. Several Halloween-themed events are lined up select Disney games up until November 2. Disney initially announced their plans for spooky events for Disney Emoji Blitz and Disney Heroes: Battle Mode. Other games have also received the Halloween treatment since then, including Disney Tsum Tsum, Disney Magic Kingdoms, Star Wars Battlefront II, and Star Wars: Galaxy of Heroes.

Disney Tsum Tsum players can hunt for ghosts in the Haunted House until the event ends on October 31. Those who succeed will be rewarded with an exclusive Bat Hat Minnie Tsum Tsum. Those who want to get ahead can take advantage of the special limited-time Kingdom Hearts and The Nightmare Before Christmas Tsum Tsum in order to get character bonuses.

Disney Emoji Blitz fans can enjoy free Jack or Sally emojis from The Nightmare Before Christmas in celebration of the animated film’s 25th anniversary. The witches of Hocus Pocus have also come to celebrate with their own set of emojis to give away. The Oogie Boogie Villain event will also give players a chance to earn the Oogie Boogie emoji until October 31. 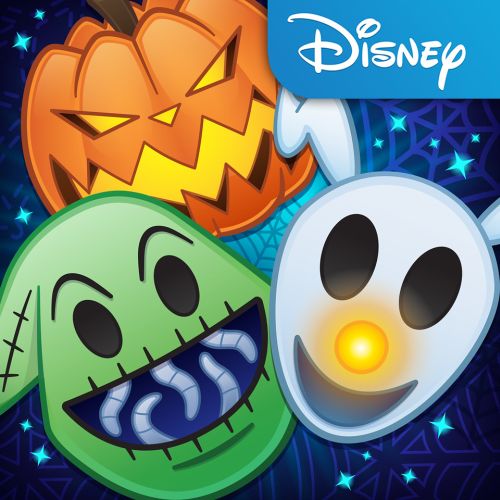 Dark clouds loom over the castle in Disney Magic Kingdoms as Maleficent takes over along with her full army of villains. Players will need to take her on in the Tower Challenge in order to restore the kingdom’s bright and sunny skies. The game also does not miss out on the anniversary of The Nightmare Before Christmas as a newly elected official drops by to oversee things in the kingdom.

Star Wars Battlefront II ends the week with a definite treat as Death Star II and Jabba’s Palace reappear during the Double XP weekend event. Players will also be able to spook themselves as they play through Halloween-themed versions of certain maps, including Mos Eisley, Endor, Kashyyyk, and Naboo. Finally, those who drop by the cloning facility in Kamino will find that it is haunted by an ocean storm.

Disney Heroes: Battle Mode will have its very own Trick or Treat event from October 29 to November 2. Players will be rewarded with points for scaring off enemies with the help of Monsters Inc heroes, collecting candy drops, and acquiring Halloween-themed badges. New characters Maleficent, Scar, and Hades will also be introduced during the event period.

Star Wars: Galaxy of Heroes is running a two-tier event from October 30 to 31. During the Defense of Dathomir event, players can recruit Nightsisters in order to defend the planet from the invasion of General Grievous, Count Dooku, and the Separatist Army. Mother Talzin shards await players who succeed in tier 1. Victors from the second tier, on the other hand, will receive 2-4 Zeta Ability Materials for their efforts.

Disney Tsum Tsum, Disney Emoji Blitz, Disney Magic Kingdoms, and Star Wars: Galaxy of Heroes are all available for download from the App Store and Google Play Store. Star Wars Battlefront II is available on Xbox One, Playstation 4, and PC.