Supercell may have a bunch of new games, but that does not mean they’ve forgotten about the one that essentially put them on the map. Clash of Clans has just received a major update this December, which includes the much-awaited Town Hall 13. The update brings in a whole new level of gameplay and strategy that will surely shake things up. 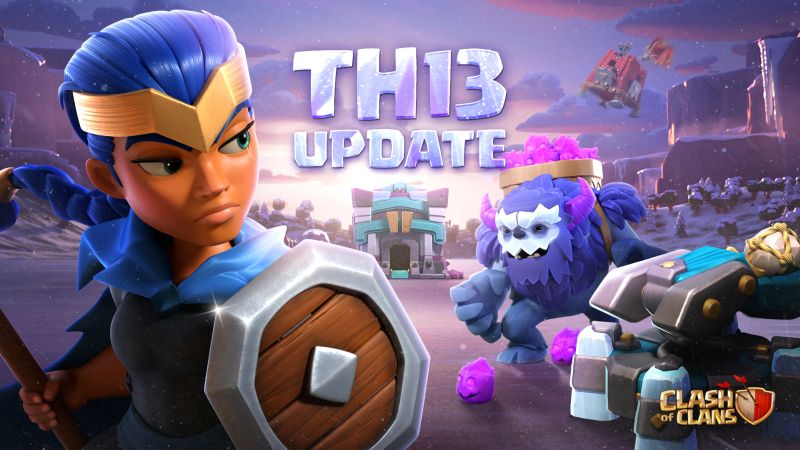 As we have mentioned earlier, the biggest news in this Clash of Clans update is the arrival of Town Hall 13. All those high-level players who have been sitting on their Town Hall 12 finally have something to throw their resources at. Town Hall 13 has a Dark Elixir and Ice theme that gives a player’s base an icy makeover once everything has been upgraded to max.

Town Hall 13 also has a new defense skill called Giga Inferno which deals damage to nearby opponents. When Giga Inferno is upgraded to level 3, the Town Hall will release an ice blast that slows down enemies upon reaching 0 Hit Points.

The Clash of Clans December update also welcomes new faces to the roster: a hero and a troop. The Royal Champion has a powerful shield attack that is perfect for demolishing defensive buildings. The Yeti, on the other hand, is a hulking troop with smaller minions called Yetimites on its back. These Yetimites retaliate every time the Yeti takes damage. When the Yeti falls, the Yetimites will break free and swarm enemies on their own.

There are also two new structures available with the update. The first is the Scattershot, a defensive building that fires a projectile at a target. The projectile then breaks apart and hits additional targets in a cone behind the initial target. The Siege Barracks, on the other hand, is a new Siege Machine that carries additional units on top of the ones donated by other members of the clan.

New units and structures aren’t the only changes that come with the Clash of Clans December update. Heroes now automatically use their abilities if they are about to die. This helps avoid wasting skills if the player is busy with other units. Army Camps, the Siege Workshop, and the Laboratory may now be resized to open up space in the village.

Moreover, there are a few balancing updates in the patch, including HP buffs for the Giant, the Valkyrie, and the Miner. The Lava Hound’s explosion radius has also been nerfed to prevent over dependence on these fiery pups. The limit for Gold, Elixir, and Dark Elixir that can be looted from raiding has also been increased to encourage more players to raid despite the cost resources.

Finally, while the Global Chat is still unavailable, Clans will now be able to find more members thanks to the improvements to the new recruitment tool.

Clash of Clans is a free to play strategy game for Android and iOS devices. If you are interested in trying it out be sure to head over to the App Store or Google Play and grab the game.