Burning, smoking wheels, blazing machine guns and metal, twisted debris which make the base for the most fanciest of vehicles. Is it Carmageddon or a new CD Projekt Red Cyberpunk game I’m talking about? Nothing of that sort. It is simply Metal Madness.

Metal Madness is a brand new game created by GDCompany for mobile devices, set in the brutal world of vehicle fights where only the strongest and the smartest survive. If you are a fan of the old school video game Twisted Metal, and want to feel again the unique vibe of Mad Max and the 80’s, you should definitely try this one out.

Metal Madness is a fast-paced, third person perspective action shooter, in which you become a driver of one of the fancy vehicles made out of nothing more than molten metal debris. In this post apocalyptic world bringing the unique atmosphere of cyberpunk-based games, you are meant to bring doom upon your enemies on numerous arenas where only the most resilient participants win. Apart from your crude vehicles you will have a whole variety of close-range and long-range weapons to choose from, such as shotguns, flamethrowers, sniper rifles and even such innovative and futuristic weaponry as plasma and lightning guns.

The life of the drivers on the arena means little and is rather short. If you want to be the last man standing, you will certainly need a set of tips and tricks which will help you outlive your opponents. If you are new to the game and want to know more about its mechanics and hints to become the winner, be sure to check out our exclusive Metal Madness tips, cheats and strategies in a complete strategy guide!

…and never get yourself caught in a standoff situation. These are the two most important rules that you want to remember of whenever you enter one of the bloody arenas in Metal Madness. Now let’s dig into this hint a little deeper. 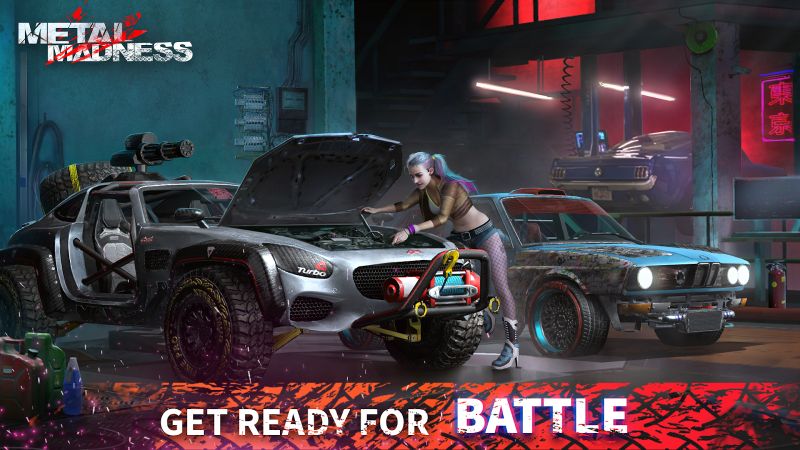 If you are not moving and just standing in one spot, it is likely that you quickly become an easy prey for your opponents. In this case, usually the winner is the one who started shooting first, and, as you may guess, sometimes you will not be the one who opens the fight. Also, a lot depends on the weapon both you and your enemy have. Sometimes you will be the underdog in a fight and you will have to outwit your superior opponents in other ways. This is why it is important to be constantly on the move to maintain control on the battlefield.

Metal Madness has an implemented auto-aim, so targeting and maintaining the aim on your enemies is easy as cake. This feature may work both in your favour as well as in the favour of your opponents, so to be effective, you have to be aware of how the mechanics in Metal Madness works. Once you happen to be on your enemies’ crosshairs, it’s not that easy to lose them from your tail. One of the ways of losing and even fooling your enemies is to drift with your car and try to stick to your enemy’s tail as much as possible. If you will remember about this simple rule, you will pretty much be in control of the situation on the field. At least… until someone else gets on your tail.

2. Maneuver Your Vehicle And Pick Your Fights

You will probably notice a repeating tendency amongst the players who will press the gas button and blindly drive forward without being aware of what’s happening around them. Others, will rush towards you with little HP. This is an easy recipe to get shot eventually and lose the control on the field of battle. You don’t want to make the same mistake as they do. 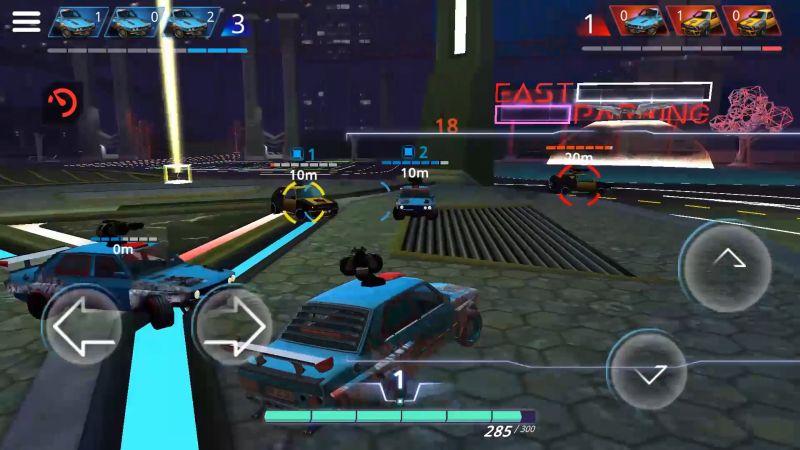 Always try to maneuver your car as much as possible to minimise the risk of getting shot, even by an accident. The good thing to do is to swivel your vehicle on left and right whenever someone starts shooting at you. In such a way, you will avoid most of the shots and, in the process, you will be able to outwit your opponent. At this point, you also have to remember that every vehicle has its pros and cons that pretty much dictates your approach on the arena. The same applies to the weapon of your choice. More about vehicles and weapons you will learn further in the guide.

Also remember of picking your fights carefully. If your car is damaged, don’t go in a berserk-mode into battle, but assess your chances of winning and losing the incoming encounter. Your primary target should be wounded enemies. It’s important to pick easy targets not only because simply they are on the verge of their existence and once you finish them off they will be gone for some time, but also because the HP of the vehicles that are left to themselves, regenerate very quickly.

3. Don’t Use A Shotgun Against A Sniper Rifle

In Metal Madness, not only matters the way how well you can control your vehicle, but also what are the weapons of your choice. Depends on the weapon you choose, you will have to appropriately adjust your role on the battle field. 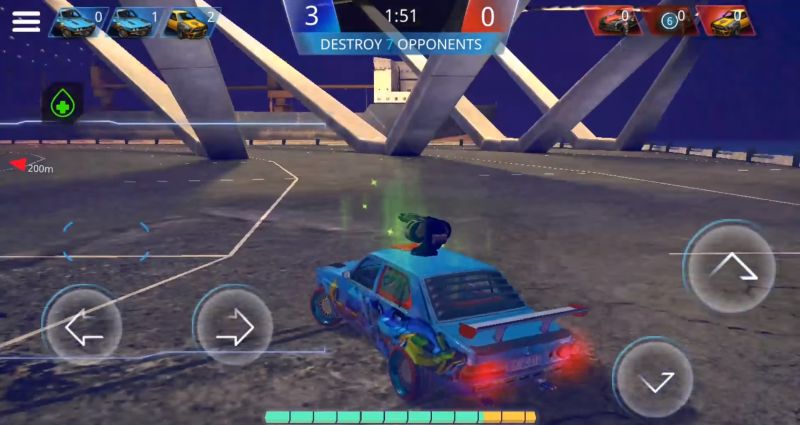 In the game you will choose from a variety of close-range as well as long-range weapons. Once you will decide to arm your vehicle with close-range guns, such as a shotgun or a flamethrower, you will probably have to be in the heat of battle most of the time to damage your opponents. Accordingly, if you choose to equip your car with long-range weapons, such as a sniper rifle, machine gun, laser or a rocket launcher, the best idea would be to take a safe spot and shoot your enemies from afar.

Being in the centre of battle severely limits your visibility and the general awareness on the field, therefore you will have to rely on drifting your vehicle and performing quick maneuvers to win your battles. On the other hand, if you arm your vehicle with a long-range weapon, such as a machine gun or a sniper rifle, you want to be as far as possible from the heat of battle in order to have a full control over the arena. Long distance will grant you better awareness and help you pick your targets. Remember that as a “sniper” you should focus in the first place on eliminating other snipers who might cause trouble to you and your allies. If you have a close-range weapon, the best way to uncover enemy snipers is to perform quick rushes on the enemy positions in the search for the snipers, quickly removing them and returning to the centre of battle where you will be most needed.

4. Adjust Your Weapon To Your Vehicle

Depending on the weapon you have, you will have to pick the right vehicle in order to be effective on the field. In such a way, if you plan to batter on your enemy’s windshields or bumpers it’s best to pick slower, but heavy armoured vehicles, so, for example, you will be able to withstand a massive hail of bullets from a machine gun. Contrariwise, if you decide to maneuver with your vehicle to outwit your opponents, it’s best to choose lighter and faster cars. It’s also worth to remember that every car offers a secondary bonus apart from speed and armour. 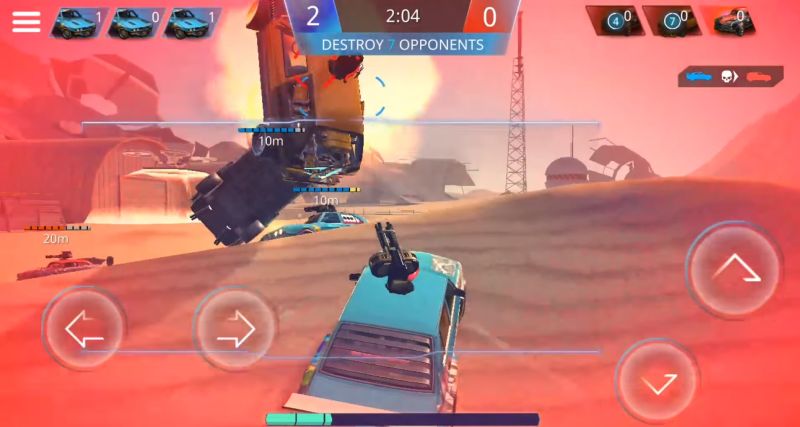 A “Knight” vehicle model (1625 Armour and 140 mph speed) is an example of a car that is quick, but also rather light armoured, thus if you plan to bump on your enemies quite often, you should pick something heavier. Knight works well, however, combined with long-range weapons, such as a rocket launcher or a sniper rifle. You can, of course, adjust your sniper role to a heavy armoured vehicle, so you will become an unbreakable turret. In the end, it all depends on the way you see yourself in battle. If you want to play slow and safe, pick a vehicle with high armour. Otherwise, go for the quick but lighter options.

In Metal Madness there are several ways of how you can defeat your opponents and, in the process, master your final result.

To win a match not only you have to destroy your enemies on the arena, but also collect special, shining crates called C.U.B.E.S. These items appear on the field randomly and can be picked up by players whenever they drive right on them. You have to remember, however, that the more cubes you manage to collect, the more likely you will become a primary target for your enemies, since the number of cubes one possesses is visible to everyone.

Once your team manages to gather 10 of them, the countdown will start, indicating the time in which your team will automatically win for possessing most of the C.U.B.E.S. At this point, if you want to guarantee your team’s success, you will have to hide from the line of sight of your enemies as long as possible. In the event of your death, you will lose all the cubes and it is likely that your enemies will collect them all, and in the process, turning the tide of battle.

To master your final battle result, make sure to kill as many enemies as you can. If you happen to be the best in the ladder, you will gain additional rewards when the battle ends.

Also, remember about performing daily missions for tokens – a currency that can be exchanged in the in-game store for a number of features, such as weapons, vehicles, but also premium improvements.

Similarly to the majority of mobile games, you will face a choice of playing Metal Madness for free or pay for additional upgrades in the premium store. 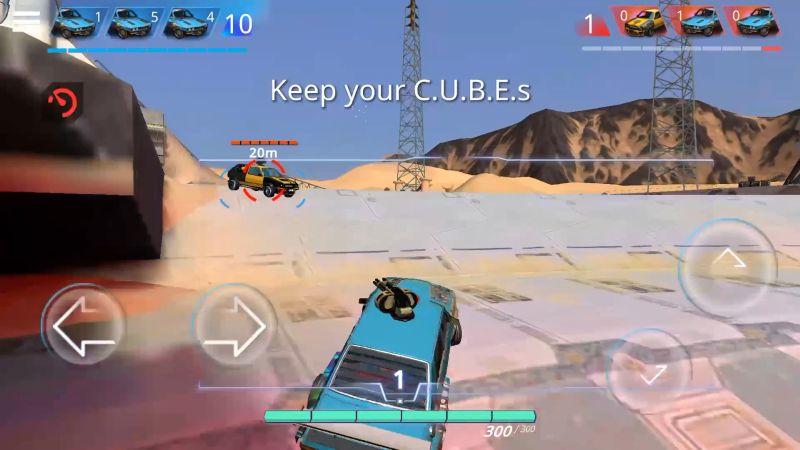 In the end, it’s completely up to you whether you want to pay or not. You can farm tokens in a normal way by playing and winning battles, but in order to gain a slight advantage over your opponents I would recommend to make the minimum investment equal to $3.12 and buy a Swordfish vehicle. Then, you can equip it with an Impulse Gun and successfully lay waste to your enemies, at least in the early stages of the game. Of course, you are not obliged to do so, since, after all, having fun is all what matters in playing games.

And this wraps up our compilation of Metal Madness tips, cheats and strategies! If you have any other useful tips and tricks, that we haven’t mentioned in the guide, feel free to let us know in the comment section below!

Hi all! I am a very good player in Metal Madness. I know all the tips and tricks and how to win when you are the last man standing from your team. I just wanted to ask can you please tell me to make best equipments for cars? Many players take Knight with Rail gun. I also saw a player having Knight and sniper gun on it, and did a very good health damage. Please tell because for sometime, I am losing many matches. BEST EQUIPMENTS FOR BEST CARS. Thanks.

Hi, Mam request. I noticed that the destroyer has a QR code on the windscreen. What is it for?