Green Panda Games is back with a brand new mobile title called Idle Construction 3D, which continues down the well-trodden path. Remember, we already reviewed Idle Aqua Park, another of the company’s popular mobile strategy games. Just like in Idle Aqua Park, the colorful environment is combined with exciting gameplay and on top of that Idle Construction 3D comes with several innovative features as well.

With that said, players who decide to embark on an adventure through the real estate world will quickly realize that this is not an easy game. In fact, you will need all the help you can get to reach the final stages. Fear not, as our detailed Idle Construction 3D tips, cheats and strategies will do the trick! Let’s get this show on the road and start some serious construction work! Check out our Idle Construction beginner’s guide to learn how to maximize your profits in construction business and become a billionare tycoon!

1. Tap On The House To Boost The Process

In Idle Construction 3D your goal will be to build houses and condos. To perform this task, you will need lots of money. Well, the in-game currency, in this case, comes in the form of gold. So, the more gold you collect – the better! 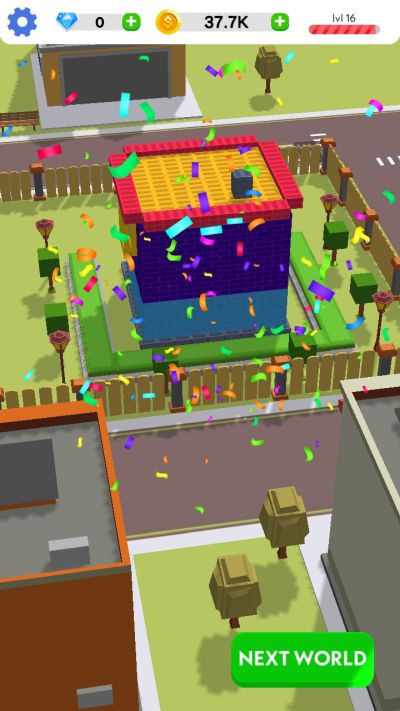 The easiest method for collecting the cash is by tapping on the central area of the screen. By doing so, you will speed up the workers who are carrying the bricks and building your house. Admittedly, tapping is not the most rewarding way of earning lots of money in this game. Later on, we will show you all the ways that can bring mountains of gold your way. Just keep in mind that one or two taps can add a couple of extra coins right when you need them the most.

2. Earn XP And Level Up At Every Opportunity

Even though they cannot be classified as a currency, XP points are an important element in the game. In other words, the actions you take will contribute towards your XP tally. What’s more, lucrative rewards could go your way if you collect enough points. Here is how it works. 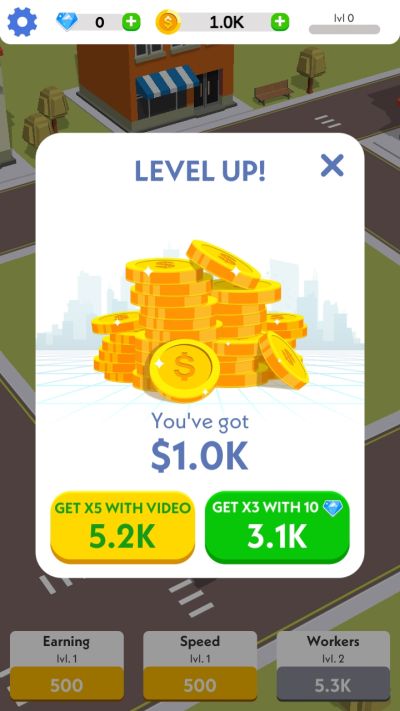 Your bricklayers will work hard to build the housing unit, and every brick they put in place will add to your XP meter. The meter is placed in the upper right corner of the screen, so keep an eye on this area at all times. As soon as the meter turns green and the words LEVEL UP appear – don’t hesitate for a second! Hit that button and claim massive rewards. On top of that, you could even double the gift by watching an ad. Make sure to do that as well.

Idle Construction 3D will provide players with as many as 13 colorful stages. To be precise, they are called ‘worlds’ in this game. With every new world, you will have to start from scratch, i.e. you will have to build a house from the ground up. As you progress through the game, the housing units will grow in size. For instance, your first task will be to build a house. After that comes a flat, then a condo, and so on.

Yet, you will have to complete the current task before you can move on to the next world. That is why it is important to check the objectives of every stage. In the upper right-hand side of the screen, you can find the shortcut to the ‘Worlds’ section. By visiting this area, players can learn about the upcoming stages. Also, they can see what needs to be done to complete the current mission.

Any home building project depends on the quality of the workers. The same goes for your construction work in this game. So, to improve the process and build a better house, invest as much money in buying new workers. Moreover, Idle Construction 3D will let you bolster their speed and propel the earnings they make. 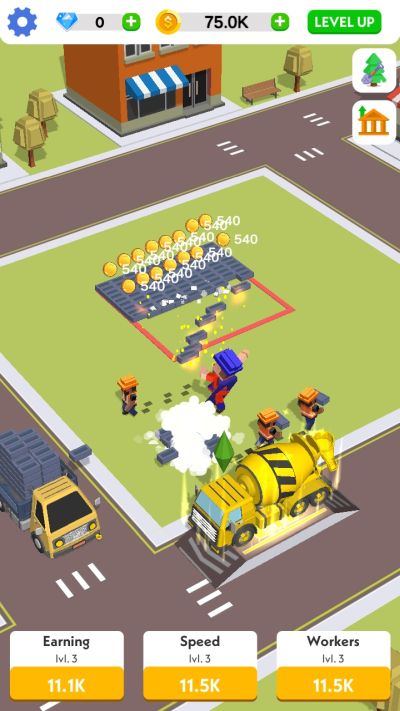 In the bottom area of the playing screen, you will notice three large icons. Their names are pretty much self-explanatory: Workers, Speed, and Earnings. As soon as these icons turn orange, you should click on them. By doing so, you will invest the cash and hire a new hard-hat. Or, you will raise their speed/earnings to a new level. Either way, these power-ups are essential for growing your real estate business so allocate the funds accordingly.

By now, you should have realized that the most important thing in Idle Construction 3D is gold. In other words, players need to focus their efforts on collecting as much gold as possible. Luckily, the game offers a wide array of bonuses and similar offers which can enlarge your wealth. For instance, one of the most rewarding bonuses is the so-called VIP Bonus.

To activate this booster, players need to click on the golden truck that will arrive in front of the construction site. A quick look at the glittery truck should tell you that this is no ordinary working machine. Instead, this large truck will provide you with a booster that turns ordinary bricks into gold ones. As a result, your workers will make much more money and you will have more available funds for future investments.

As we said, the game will throw bonuses at you at regular intervals. So, keep an eye on the right-hand side of the screen. For example, every once and a while a small circle will pop up in that area, indicating that a new bonus is up for grabs. One of the most rewarding bonuses is Super Builder. 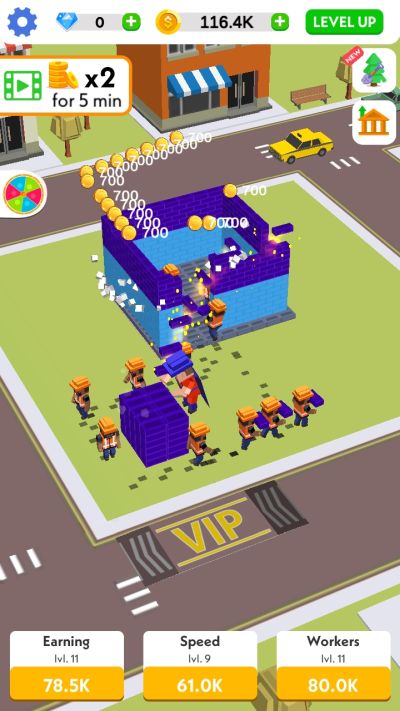 As the name implies, Super Builder is an upgraded and more powerful version of your average construction worker. In a way, he acts like a foreman, motivating others to pick up their productivity. Of course, Super Builder comes with incredible speed and strength, which allows him to carry massive weights with ease. What could be better than hiring a Superman to help you with the heavy stuff?

7. Use The Golden Brick Booster

Similar to the VIP Bonus, the Golden Brick booster will turn your ‘standard’ bricks into the golden ones. For that reason, we recommend that players make the most out of this feature as well. As we said, anything that can boost production is important and should be treated as such.

Yet, the Golden Brick bonus feature comes with a limited duration. To be precise, you will have 30 seconds to maximize the potential of this offer. Of course, you could leave the workers to do the job in their casual tempo. Or, you could tap the screen and make them extra motivated. Needless to say, your bankroll could skyrocket after those 30 seconds as long as you tap the screen and keep the workers busy.

Besides the number of workers and their value, the speed in which they move plays a crucial role in the construction work. Players can increase the speed of their laborers by investing in the power-up at the bottom of the screen. Yet, this will only result in a gradual increase in speed. If you want to see spectacular acceleration, you should claim the Speed Booster as soon as it appears.

Like all other bonuses we mentioned, this one will also pop up on the right side of the screen. And yes, you will have to watch an ad to trigger this bonus as well. But the rewards will be worth it, no doubt about it. The Speed Booster will make the builders move 2x faster! With renewed energy, hard-hats will fly across the construction site.

9. Try Your Luck At The Wheel Of Fortune

With all those available bonuses, it is clear why Idle Construction 3D attracts so many players. In a way, a wide array of boosters, bonuses, and power-ups makes the game easier to play. At the same time, these features are adding to the excitement of the game.

Speaking of excitement, the feature on the left part of the screen could get your blood running faster. Designed in the form of a vertical wheel, this bonus will remind you of an online casino. Yet, the so-called Spin & Win bonus is a classic Wheel of Fortune feature. Players need to watch an ad first, which makes them eligible for a spin at the wheel. If the wheel stops at a good spot, you could win diamonds, boosters, or gold.

10. Decorate Your Property With Ornaments

Last but not least, a quick tip on making your real estate stand out from the crowd. As we know, real estate tycoons have a knack for selling things. Well, it is much easier to sell a house that has a lovely-looking fence than the one that has no fence at all. 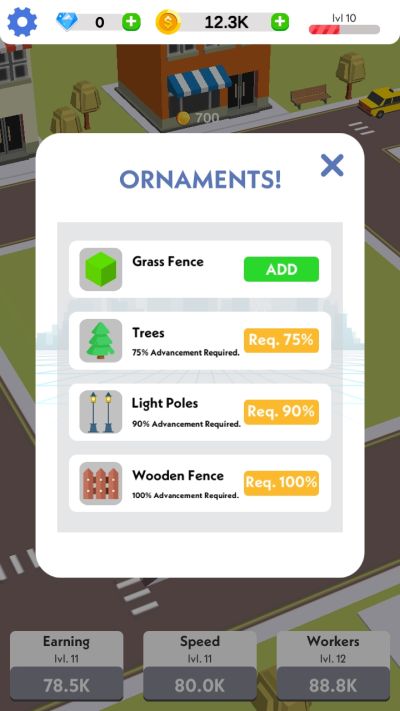 The accessories in Idle Construction 3D are also available on the right side of the screen. Once you go to this section, you will see that ornaments require a certain level of completion of your current construction work. In other words, the more you build – the more accessories you will unlock. For example, players can decorate their newly-erected houses and buildings with trees, light poles, wooden fences, and so on.

There you have it! A comprehensive list of the best Idle Construction 3D tips, cheats and strategies. Of course, if you happen to think of something we could add to the list, feel free to drop us a line in the comment section!

My son worked on this game for hours and was saving all of his coins--he had millions of coins--and out of nowhere the whole game reset and he lost everything! This is absolute bullshit! Someone needs to make this right!

Does the game came back to level 1 it self