Even though Endless Balls has a simple and relatively minimalist design, the game created by ThinkCube can provide players with a lot of entertainment. The concept of Endless Balls is pretty straightforward – you need to hit and destroy all the blocks in front of you before you run out of lives, i.e. attempts. However, over 1000 creative levels will require logic, ingenuity, and a bit of luck, and that is why our Endless Balls cheats, tips & tricks guide is your best source of useful strategies.

Strategic thinking and planning will get you a long way when it comes to Endless Balls, and that is why we encourage players to shoot the balls in a calculated manner. Our 8-point list is full of useful information, and hopefully, it will help the players during the battle against the obstacles that stand in their way.

1. Try To Cause Havoc Immediately

When it comes to Endless Balls – havoc is your friend! In other words, random and uncontrolled movement of the balls will often result in unexpected trajectories of those same balls, which will result in hits and ‘good things’ for you. Therefore, the players should always think about the moves that can cause a frenzy out in the playing area.

When the balls are bouncing around in a disarray, they can hit the blocks in all sorts of ways, and the domino effect is something which will greatly benefit the player. Every box or a triangle has a certain number displayed on them, and this number signifies the number of hits it takes for the block to be destroyed. If the field is in a state of chaos – the greater the chances of destroying the block. Of course, not every map is the same and you need to plan the shot carefully in order to set in motion the biggest mess you could possibly trigger.

Since the goal of the game is to make enough contact with the blocks, the players need to shoot the balls in the appropriate direction. The balls will bounce off the side walls and the top, and they will also get deflected from the boxes. Of course, Endless Balls is all about the angles as well, and the players need to remind themselves of the basic laws of geometry before attempting advanced levels of this game. 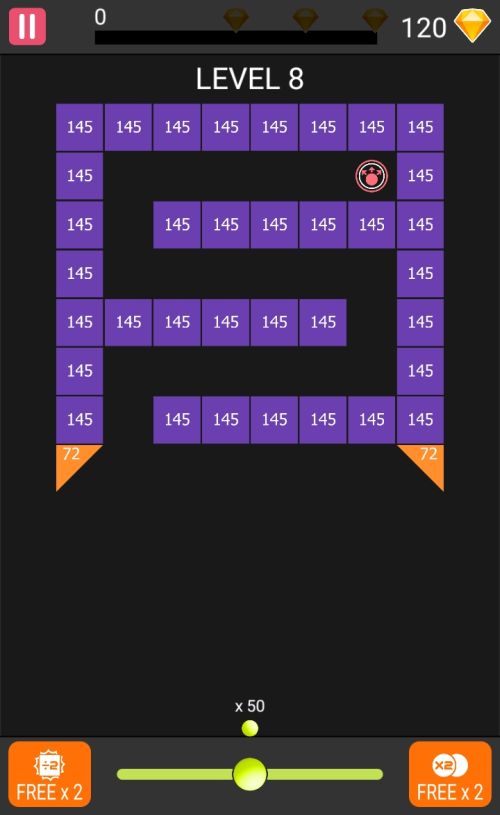 However, one helpful tactic is to try and make the balls move in a lateral way as much as possible. The horizontal movement of the balls will create the most contact with the boxes, and this increases the chances of surviving and completing the mission in question. If the balls are moving in a line that is relatively parallel with the bottom, they will engage with the boxes at wide angles, and this will also help in making more contacts between the balls and the blocks.

3. Double The Number Of Balls

Even though the name of the game says that you will have access to Endless Balls, the reality is a bit different. In fact, your every shot will send out exactly 50 balls aligned in perfect order, and they will all hit the spot you select. During the initial stages of the game, 50 balls per shot will be more than enough to obliterate all the boxes with ease, but advanced levels could be more challenging. 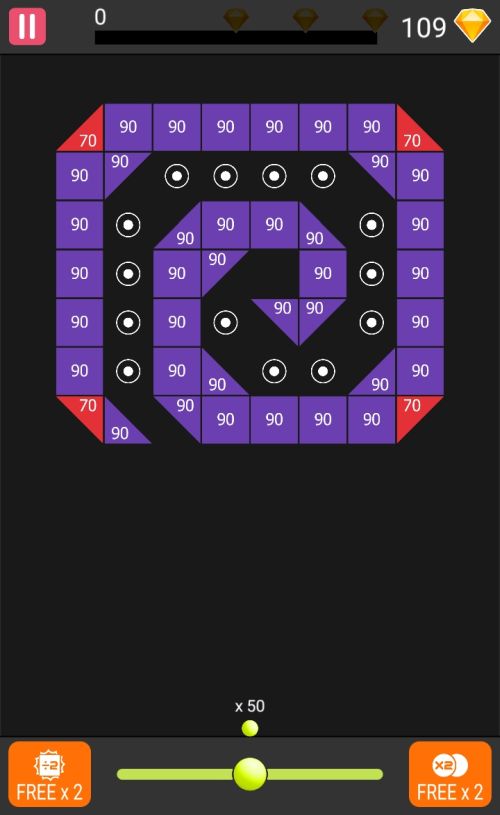 For instance, if you find yourself stuck and you cannot find a way to blast away all the boxes, one of the tools that could help is placed in the bottom right corner of the screen. By pressing this button, the number of balls per shot will double. Of course, this service does not come for free, and you will need to pay 100 diamonds for doubling the number of balls in your shots. Needless to say, the sacrifice will be worth it only if you use the shots in the right way!

4. Lower The Difficulty Of The Boxes

The previous tip on our list was related to the command which is positioned in the right bottom corner, and this one will tell you more about the option that lies on the left-hand side. This particular tool is also highly useful when you find yourself in the moments of need, and it will help you move onto the next map if you ever get stuck.

By using the command in the bottom left corner, the players will cut in half all the numbers displayed on the boxes. In other words, the job of blasting away the squares will be twice as easy now that you need to hit a box 50 times, instead of 100, for example. Naturally, this tool also requires diamonds to work, and every ‘cut’ will cost you a 100 of those precious stones. However, certain maps will be very challenging, and they will demand all the help you can get, and that is why this particular tool is of great importance.

5. Use The Safety Net

Every once and a while, Endless Balls will present you with a special gift in a form of a symbol on the screen. There are several categories of those bonuses, and we advise the players to always try and make the most out of these symbols since they can significantly help with completing certain missions. 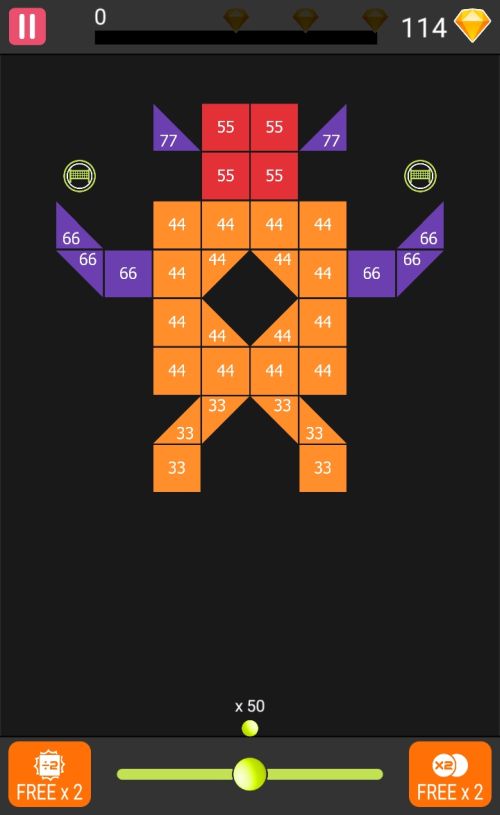 The ‘net’ bonus sequence is triggered when you hit one (or more) of those symbols on the screen. The ‘net’ symbol immediately disappears, but the players will soon notice that the bottom part of the screen now works as a wall. In other words, the balls are bouncing right back up and returning into action, which can lead to many more hits and points for the player. Unfortunately, this bonus does not have a long duration, and after a couple of seconds – the bottom of the screen turns once again into the abyss which obliterates all the balls without mercy.

6. Triple The Number Of Balls

Earlier in our Endless Balls guide, we mentioned the fact that every shot in the game allows for 50 balls only. Sometimes this amount will be more than enough, but in some cases, the players will need to look for help. Luckily, the game provides a lot of options when it comes to boosts and bonuses, and one of them will appear in certain missions as a ball with three arrows on top. 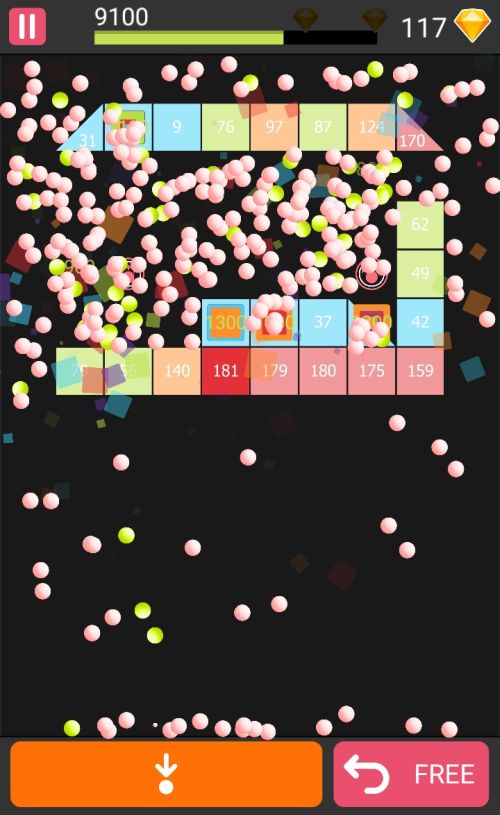 By hitting one or more of these symbols, the players will once again enter the bonus sequence. The number of balls will be tripled, and this will turn your screen into a real pandemonium. The massive number of balls bouncing around will inevitably lead to the destruction of the obstacles, and that is why these types of maps are easy to solve. As a matter of fact, you do not have to do a lot – just hit the ‘triple arrow’, sit back and relax while all the mayhem does the job for you.

Some of the blocks in Endless Balls are periodically made of concrete, and what better way to blast through concrete than with a large barrel of dynamite?! The old-fashioned looking barrels are pretty powerful, and they leave a wide circle of destruction after the explosion. That is why we urge the players to aim for the barrels and hit them early on in the mission. By doing so, the playing area will be cleared, and it will be easier to just take out the remaining squares one by one. 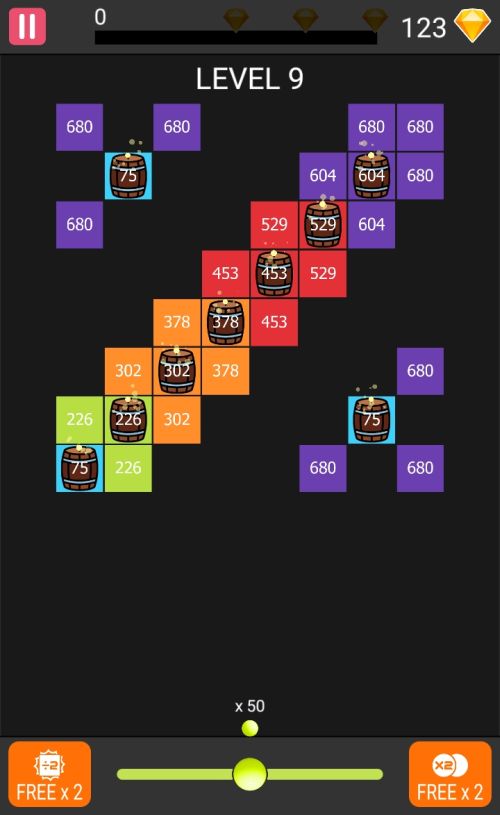 Another important element of the exploding barrels is that they can trigger each other, i.e. if you ignite the powder in one of them and the blast reaches the other one – they all go off together in one big, beautiful explosion. Therefore, the only thing you need to do is to angle the first shot in the appropriate manner and set off the fireworks!

As we already mentioned, Endless Balls offers a range of available boosts that are designed to help players complete the missions and destroy all the blocks. Aside from ‘the net’ and ‘the triple arrow’, the game also offers a bonus called ‘the lightning’. You do not have to be Tesla to play with the bolts of electricity in this game, and these flashes can be of use when it comes to bringing down the chunks of boxes. 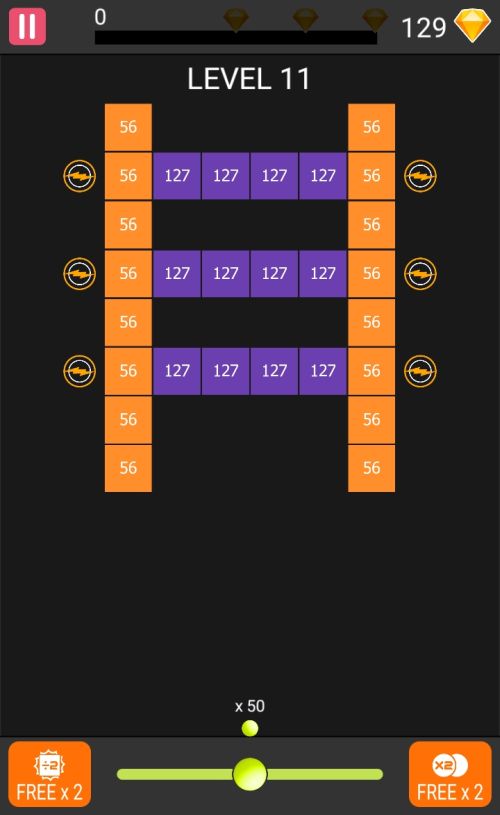 The icon for this boost is designed in a form of a flash or thunder, and once your shot hits the icon on the screen – a powerful electric discharge will affect the boxes in the same row or column. Some flashes send the electricity vertically while the others do it horizontally, and there are even those which can send out the lightning in all directions at once. Either way, these bolts will help you destroy the boxes and that is why we advise the players to exploit the boosts as much as possible.

With our final tip, we conclude our 8-point Endless Balls guide and we hope that some of these tactics will help you with the game. In case you know any other useful tips or strategies, don’t hesitate to leave them down in the comments!