Air Force Lords is a simple yet addictive action game where you get a chance to control a variety of different combat helicopters in all kinds of missions ranging from simply destroying everything in your path to defending your own base to interesting boss missions where you get to battle warships, foot soldiers, armored bunkers, and bosses embodied in various war machines.

The game is pretty easy to learn but, as many similar games, relatively hard to master. As you advance through the game’s single-player campaign you will face increasingly difficult enemies that will become more deadly and will also become equipped with weapons that can destroy your chopper in just a couple of hits. Of course, Air Force Lords offers players freedom of choice when it comes to their combat strategy and the approach to each battle meaning that, even when things look grim you can turn the tides of war to your side by utilizing different strategies that focus on survival while at the same time trying to be maximally efficient in dealing with enemy forces.

Air Force Lords isn’t an extremely pretty game; the game’s graphics are there to provide high definition background for the constant action that Air Force Lords is. Aside from some pretty looking helicopter models, the game doesn’t offer much in the visual department but that’s okay because without high def effects the game looks clean and crisp with enemies that are extremely easy to spot and without unnecessary elements present on the screen that can make your focus wander away from enemies.

The game offers a chunky single-player campaign along with the Boss game mode where you are put against increasingly difficult war machines like aircraft carriers, giant tanks, and choppers capable of destroying whole cities with their armaments. The game starts slow but soon enough pushed the difficulty up considerably. Missions can be pretty hard but there are a couple of neat shortcuts that allow you to get powerful upgrades relatively early. Also, this strategy of getting powerful upgrades early in the game allows players to spend the majority of their resources on getting more powerful weapons, making the game much easier to play. So, stay with us, check out our Air Force Lords tips, cheats and strategies and find out how to destroy every single enemy that gets in your way!

1. Constant Movement Is The Key

You can shoot at enemies without moving at all but that will mean your helicopter will get filled with lead after just a couple of minutes. And even during the first few missions, the enemies are strong enough to destroy your machine if not careful. So, instead of being completely stationary try to move as soon as you spot an enemy is shooting at you. 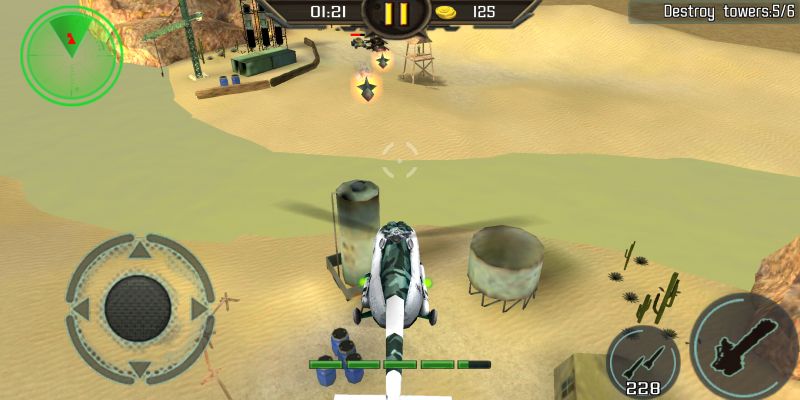 During the early game this is quite easy to pull off because you will face a small number of enemies per level. This means that you can easily spot them and just as easily avoid incoming projectiles. So, be stationary while firing (this will make destroying enemies much easier for new players and will give them time to learn how to become better at aiming) but as soon as you spot a projectile heading your way simply maneuver your gunship just enough to avoid the projectile.

On later levels, things will become much more heated and stationary firing won’t be a choice. Fortunately, you should’ve learned how to aim while moving by now so try to constantly move while firing at enemies. This will make most of the incoming projectiles to miss, just make sure you move at all times.

2. Play The First Few Levels With Both Control Schemes To See Which Is Better For You

Air Force Lords (unfortunately) supports solely move controls. You fly with a virtual joystick but aiming is done by moving your phone. And the game offers two control modes. The first one is for those who keep their phone parallel to the floor while playing, while the other one is made for those who play while keeping their phone screen parallel with their face.

3. Get The Best Chopper As Soon As You Can And Spend Resources On Upgrading Weapons

The game’s store will unlock after you finish the first couple of levels. In there you can pick many different helicopter models, from humble models used for infantry transport to proper war machines equipped with up to five different weapon systems.

Your starting helicopter along with a few more expensive models can carry just two weapon systems – the good old auto cannon and dual missile launcher. But you don’t want those, do you? You see, in Air Force Lords new choppers can be bought either for gold or for diamonds (the game’s premium currency) but there’s something better. 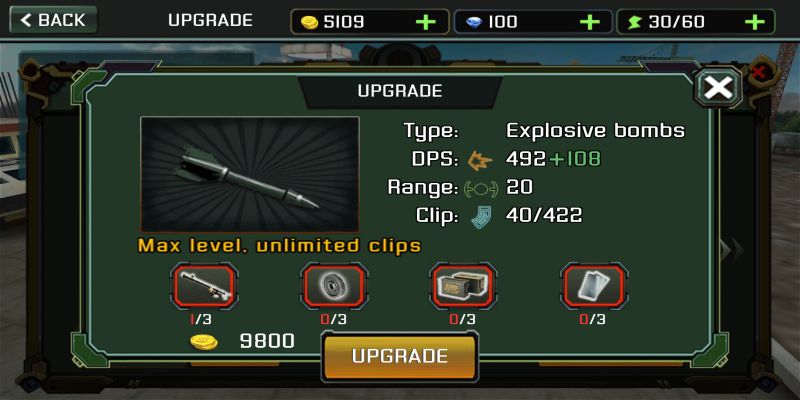 Each chopper, even the most expensive models, can be yours after you watch a set number of video ads. Yes, that’s right, you can get the best chopper in the game without spending a dime! Just go to the most expensive model and you’ll see in the upper right corner an icon notifying you that the vehicle can be yours after you watch 15 video ads. And that’s it! After about five minutes of watching advertisements, you will own the best vehicle in the whole game, making almost every mission a piece of cake.

Now that you have the best vehicle Air Force Lords offers, it is time to save up some money and start upgrading weapons. You should upgrade your auto cannon and wait to save up enough gold to get the third generation of dual missile launchers. After you get the third gen missile launcher to feel free to upgrade it. Fully upgraded it will be enough for almost all missions and by the time it becomes too weak you will have enough money to get something more powerful.

Also, once you get the best chopper to make sure to unlock its homing missile launcher. It costs around 180 diamonds which you can gather relatively easy by watching video ads. This combination of weapons is powerful enough to make almost every mission easy as pie. Problems may appear during the fourth set of missions, but by then (as we already said) you will have enough money and diamonds to get something more powerful.

4. Cannon Is Better For Buildings While Missiles Are Deadlier For Moving Enemies

Almost every mission in Air Force Lords includes both buildings and moving targets that have to be destroyed by your helicopter. The stationary objects are perfect for your autocannon. Just aim at them and start shooting. 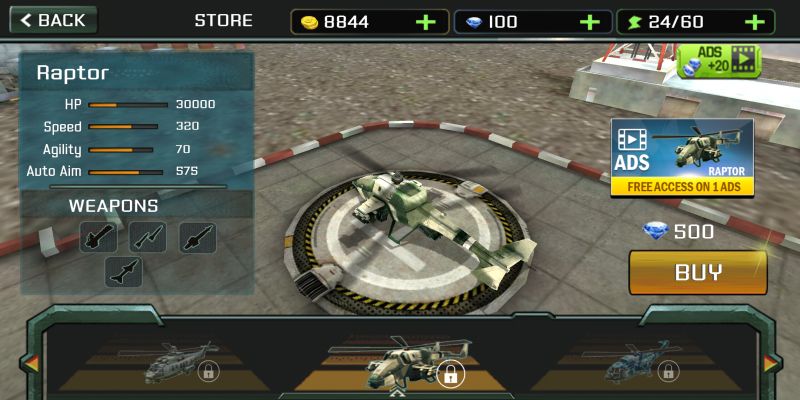 Moving targets, on the other hand, should be attacked with missiles. Now, do not use homing missiles, they should be used just for bosses and other extremely powerful enemies because they are too expensive to spend them on simple cannon fodder. For most moving targets regular missiles are more than enough. They are cheap to buy and after you upgrade them a couple of times they will become quite deadly (and do not forget to buy the third-gen missile launcher as soon as you save up enough gold coins) against most tanks and warships and they will instantly kill infantry.

So, remember, autocannon is used for buildings (and it also should be upgraded a couple of times to save you time while destroying buildings), the missile launcher is used for most vehicles and infantry, and homing missiles are used for bosses and powerful vehicles with lots of health.

5. The Three-Star Rating Is Granted Only After You Destroy Every Single Enemy

Air Force Lords offers lots of different missions that come with various objectives. Some ask from you to destroy all defensive towers, others demand to explore the map, and some are tricky boss battles. But they all have one thing in common. In order to get a three-star rating you simply have to destroy every piece of enemy force present on the map. Mission rating isn’t affected by remaining health or the time you needed to finish a mission. The only thing that counts is whether you managed to destroy everything on the map or not.

That means that when you have the objective to clean up five tanks, destroying those won’t give you a three-star rating even if you finish the mission in five seconds without taking a single damage point. No, in order to get a three-star rating make sure that there isn’t a single red do on your radar. If you think you destroyed every piece of the enemy force and still get two stars at the end of a mission, think again. Restart the missions and before you end it (by tapping at the upper middle part of the screen) sweep the map and try locating each enemy. And only after you are sure everything is destroyed you can tap and finish a mission.

Okay folks, that’s all as far as our Air Force Lords tips, cheats and tricks are concerned. We hope that our strategy guide will help you completing the campaign with flying colors and that you will manage to kill every boss in the Boss Battle game mode. Thanks for reading and happy gaming!